We now pronounce this wedding-centric romantic comedy as subtle as a stripper at a bachelor party. 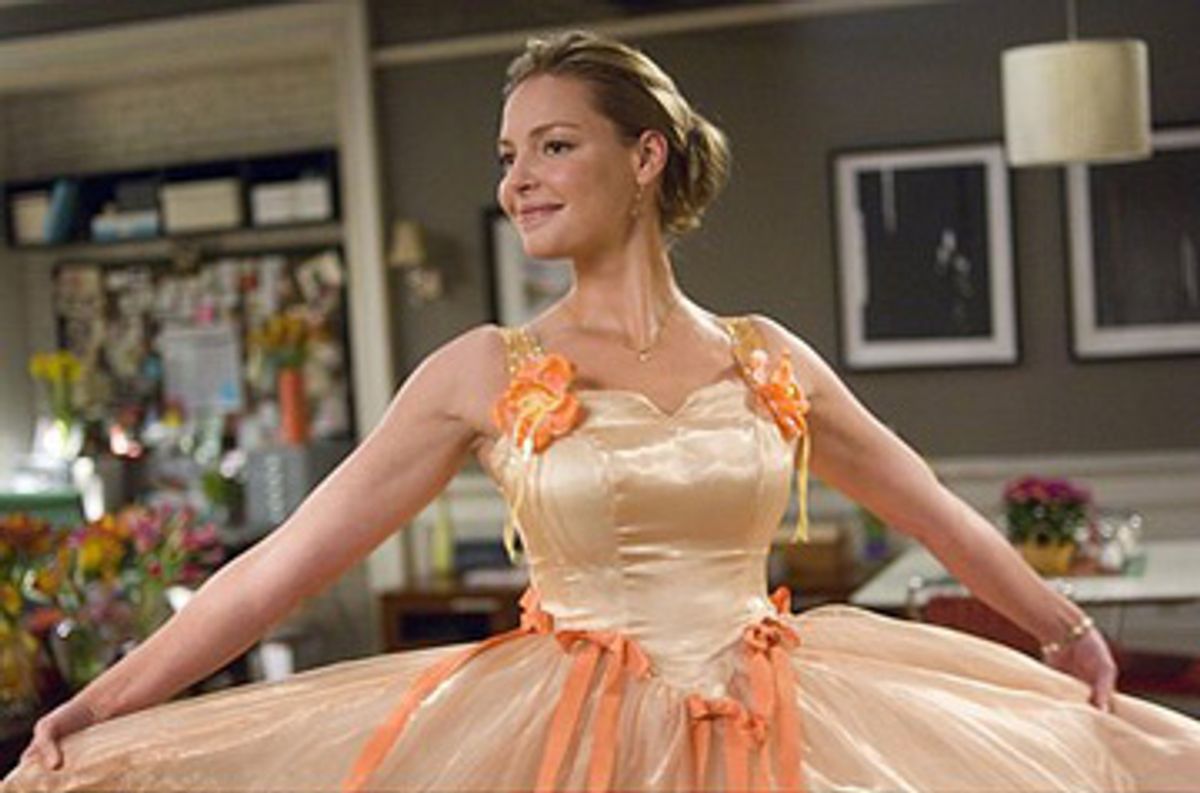 Jane is a Bridesmaidzilla. Having racked up more than two dozen wedding-attendant gigs already in her young life, she is, at the beginning of "27 Dresses," pulling off a career coup by simultaneously working two sets of nuptials in a single night. What in the name of Vera Wang is wrong with this woman? Nobody likes tulle-swaddled Jordan almonds and the electric slide that much. And how many people are on speaking terms with that many affianced females, anyway? But Jane, everybody's reliable, overorganized buddy, is a shower-throwing, rice-tossing machine.

Shuttling between her dueling weddings, Jane (played by "Knocked Up's" Katherine Heigl) meets Kevin (James Marsden), a handsome guest who, unbeknown to her, writes the Sunday newspaper "Commitments" column she's secretly addicted to. Kevin, we are reminded every five minutes or so, is cynical and cranky about the weddings he covers and matrimony in general. "Don't you think it's a whole lot of ritual for something that's got about a 50-50 shot of making it out of the gate?" he asks. Not when romantic comedies give better odds.

Written by Aline Brosh McKenna, who adapted "The Devil Wears Prada" for the screen last year, "27 Dresses" is a film that wants to deflate its wedding cake and eat it too. It may slyly suggest that weddings are an overpriced excuse to trot out our tackiness. It may vaguely float the notion that a single woman who reads Brides magazine in the privacy of her home is sad. But ultimately, it reassures, it's OK, because deep down, a big wedding is what everybody really wants.

Jane, her prime Manhattan real estate of a closet bursting with satin and tulle confections, is a gal who can't say no. She pines hopelessly for her too-perfect-for-words boss, George (Edward Burns), a square-shouldered, dog-loving, self-made, eco-friendly, vegetarian tycoon. He, in turn, meets her vixenish baby sister, Tess (Malin Akerman), at a party, and right before Jane's devastated eyes, promptly falls head over heels for her. Within weeks, he's down on one knee in a rose-strewn restaurant, Tess is sporting a golf-ball-size diamond, and Jane is planning for her sibling the dream wedding she always envisioned for herself. Kevin, meanwhile, is starting to smell a Style section front-page feature in Jane's serial bridesmaiding, leading to much sitcom-level misunderstanding and an inevitable montage of Katherine Heigl gamely cavorting in an array of fugtastic dresses. The devil wears butt bows.

Will Jane ever shake herself free of the "taffeta ghetto"? Could the cantankerous Kevin, who describes his job as "spinning crap," have a hidden romantic side? The answer's as predictable as a lap dance at a bachelor party.

With its wound-tight-heroine/handsome-charmer/wisecracking-reporter love triangle, "27 Dresses" would appear to wish dearly to be a screwball heir to "The Philadelphia Story." There are moments director Anne Fletcher does pack in some fizzy, cheap-champagne charm, particularly when she allows the movie to go darker and tarter about weddings and their gauzy, pearl-encrusted trappings -- the registries for useless domestic swag, the childhood-snapshot-riddled engagement party slide shows, the near-bloodbath bouquet toss.

The casting is likewise appealing. Heigl brings a steely strength to her ostensibly mousy character. Even with her hair a little darker to signify that she's the bland sister, we'd never believe the deft, disarmingly pouty actress as a mere dormouse. When Kevin asks Jane if she has needs of her own, she deadpans, "No. I'm Jesus." But Jane has needs up the wazoo. She needs to be the one everybody else needs. One look at her overstuffed Filofax and it's clear she gets off on running the show on everyone else's Very Special Day. Barking orders at cabdrivers, unblinking when negotiating with a baker, and drunk-dancing like a champ, Heigl's Jane is a comic force to reckon with. Yet the movie never lets the character blossom into anything more than a white-lace-fetishizing girl, hoarding clippings from the Commitments page.

In contrast, Judy Greer, in the requisite wisecracking BFF role, is a woman whose idea of a good time involves tequila and bubble wrap. Whether she's slapping some sense into her friend or stumbling into work from a post-wedding walk of shame, Greer brings devilish mischief to every line and smirk. How come a film with these formidable females falls into the chick-flick trap of offering such half-assed Prince Charmings? Burns' George is downright oblivious, both to Jane's ardor and Tess' vapidity. Marsden, meanwhile, who brought a deliciously winking energy to "Hairspray" and "Enchanted," is far less convincing as a journalist with an oft-cited, yet rarely seen dark and moody side. He's much more in his element belting out a duet of "Benny and the Jets" on a bar than when he's trying to whip up chemistry with Heigl.

But the biggest disappointment of "27 Dresses" is that it inhabits a Harlequin romance New York City, one remarkably short on homosexuals and divorce. Romance, in Jane's world, is strictly a male-female proposition, in which the best part is the look on a groom's face when his bride walks in. It's likewise never suggested that any of Jane's 27 brides and grooms are anything but still contentedly hitched. It's not the job of Hollywood fluff to proselytize, but the story could have been so much smarter and sharper had it not swallowed the big, white, sugary pill wholesale. Even "Four Weddings and a Funeral" allowed for a gay union and the possibility of happily unmarried ever after. It's also odd that none of the central characters in the film are married. When Kevin chides Jane that she doesn't care about marriage, just weddings, he could be speaking for "27 Dresses" itself. And although it's presented here as a woman's worst fate, "always a bridesmaid, never a bride" has its advantages: It's more colorful than another bland happily ever after.