After a bruising campaign, South Carolina's Republican primary -- which has always predicted the eventual nominee -- is a toss-up. 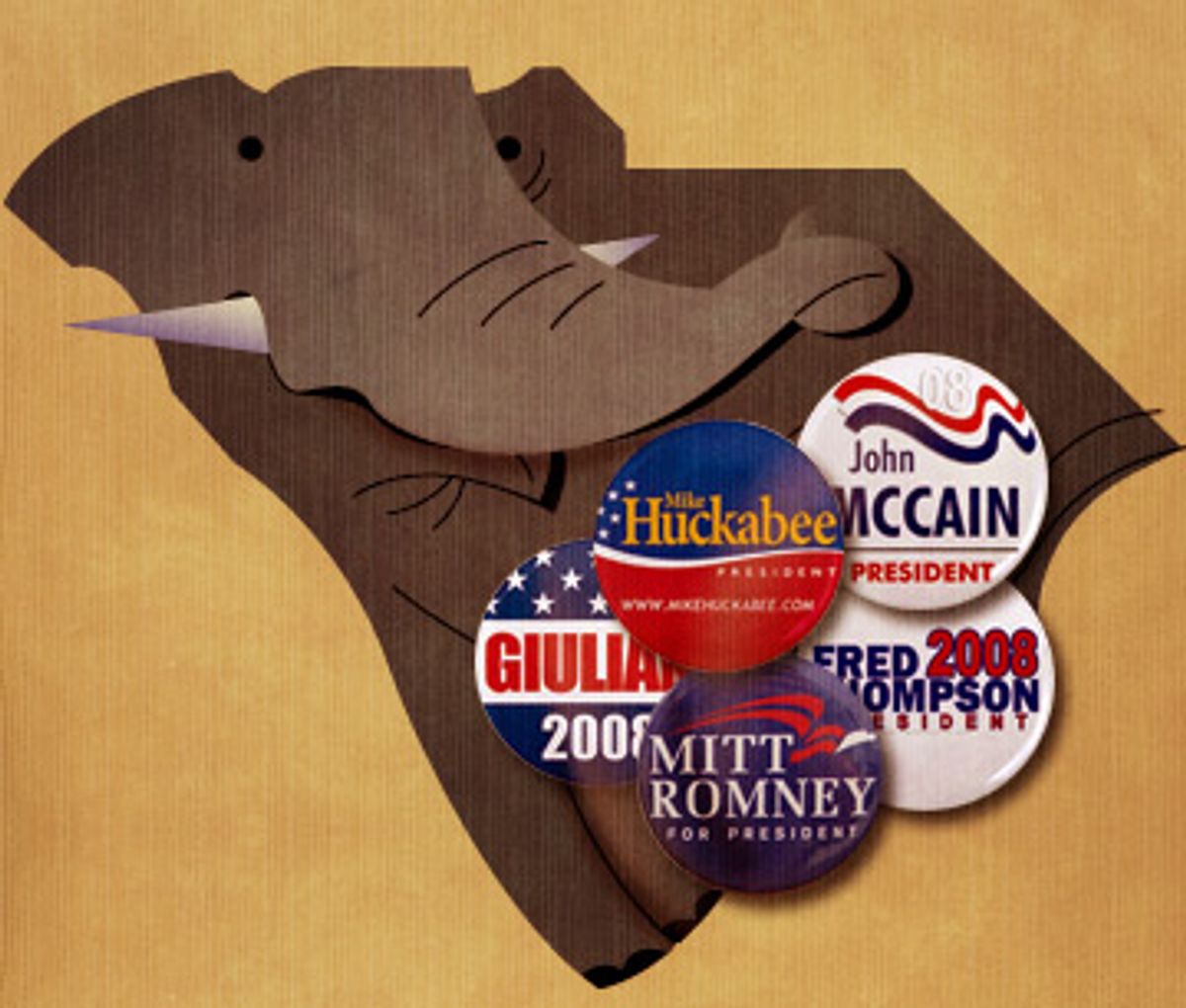 Janet Huckabee -- substituting for her fog-bound husband at an airport rally here Friday morning -- was entertaining the crowd by talking about skydiving from 14,500 feet: "I don't know how many of you have been up that high. But there gets to be a point where you can't breathe without oxygen. And my head was getting really dizzy." Her words could equally apply to the dizzying emotional heights on the eve of the South Carolina Republican primary, a contest that has an unerring record of picking the eventual GOP nominee.

Mike Huckabee, who is narrowly trailing John McCain in the final pre-primary polls, does not have to win here to maintain a rationale for his touched-by-a-miracle campaign. But victory would certainly help clarify this theme-less pudding of a Republican race. Mike Campbell, Huckabee's state chairman and the son of a former governor, said bluntly -- perhaps a little too bluntly -- at the Aiken rally, "He should win here. If Mike Huckabee can't speak to South Carolinians, I don't know who can."

South Carolina is a state whose motto might well read "Politics Ain't Beanbag." Between the deceptive "push polling" (which seems mostly the province of groups aligned with Huckabee) and the ugly whispering campaigns (much of it directed at Mitt Romney's Mormonism), voters here are adroit at ticking off the liabilities (real and invented) of the candidates. It is as if in picking a candidate, South Carolina Republicans remember only the grudges.

"Romney is lying to us," said Roger Ginter, a machinist for a defense contractor, who was at the Huckabee rally. "In his big religion speech in Dallas, he didn't say what he believes. Mormons believe that Jesus was the son of God. But they also believe that Satan was the son of God." Instead of arguing this questionable theology with Ginter, I just let him ramble. "McCain is part of the problem in Washington," Ginter continued. "He's been there too long. And Fred Thompson is another insider. He was a lobbyist for Planned Parenthood."

Faced with sentiments like this, Romney abandoned South Carolina on Thursday for a dice roll on the Nevada caucuses, leaving only his TV commercials behind. "For a business guy, he didn't get much of a return on his investment," gibed Chip Felkel, a Greenville-based GOP campaign consultant, who is reveling in his nonaligned stance in the presidential race. As for the Huckabee campaign, Felkel said admiringly, "It's a wonderful combination of the old-time religion and chutzpah." But Felkel believes that McCain has the edge because "Republicans will go back to the old tried-and-true in the middle of chaos."

It is striking how different the McCain and Huckabee campaign events seem during the run-up to Saturday's primary. A McCain crowd -- like the 400 people who waited almost an hour for the Arizona senator in Sumter on Thursday night -- is older (roughly one-third gray-haired) and radiates a sense of reverence for the candidate's military record. McCain's first questioner in Sumter made reference to his five and a half years in the "Hanoi Hilton" as a Vietnam War POW, and the second query came from a man who began, "I honor you as a war hero." That may be enough to prevail in this patriotism-on-your-sleeve state. But for all the chuckles at the "Congress spends money like a drunken sailor" jokes and the applause at the pledge to follow Osama bin Laden "to the gates of hell," the 2008 McCain candidacy remains long on familiarity and short on fervor.

The cries of infants are what distinguish a Huckabee rally. Late Tuesday afternoon in Rock Hill, I counted more than 30 small children (babies in their mothers' arms, little girls happily coloring through the speech) among the 300 adults who had turned out to hear him at a sports club in a new subdivision. While a precise toddler-to-teenager count was difficult in the cramped Aiken airport Friday, there was a sense of extended family to the event, which was not marred by the absence of the candidate. Maybe the mood inspired Janet Huckabee to say (with a sense of fatalism unusual for the campaign trail), "The exciting thing is that if it were all to come to a complete dead stop -- which I don't think it's going to -- if it did, if it would, it would be one of the best experiences that I've had. We have met incredible people."

Thompson , who is bobbing at just under 15 percent in the latest polls, is the candidate who risks everything coming to a dead stop in South Carolina. The actor, lobbyist, former Tennessee senator has made a heavy television buy here -- and his campaign recognizes that, in theory, a state like South Carolina should be dead-red for Fred. Thompson, who spoke Thursday to a 75-person lunch-time crowd in a small town called Prosperity, is crisper, sharper and, yes, more energetic as a candidate than when I spent a day with him in South Carolina in November. But like Wesley Clark in 2004 -- another ballyhooed late entrant into the presidential race -- Thompson's gradual mastery of what it takes to run for the White House may be happening too late to make a difference.

Harriette Kinard, a retired second-grade teacher who works part time in the Towne Square Antiques shop in Prosperity, may be the emblematic voter in the South Carolina Republican primary. She had closed the shop briefly to dart across the street to hear Thompson. Her verdict: "He was everything I was looking for -- a real conservative -- but I wish he had started sooner. It's between him and McCain right now. McCain's age [71] is the only thing that's bothering me about him. Both McCain and Thompson have the knowledge, and they're men I trust."

Sitting on a stool under an ancient movie poster advertising Gene Autry in "Rim of the Canyon," Kinard -- a faithful Fox News viewer and passionate George W. Bush supporter -- happily ran through (and down) the other candidates fighting to get out of the canyon. "I don't like Huckabee," she said flatly. "I like Rudy Giuliani, but I'm so conservative that I have to overlook his abortion and gay rights stands. And Giuliani has too much baggage family-wise."

When it came Romney's turn, Kinard paused in her breathless commentary as if she were entering a sensitive area. "Romney being a Mormon bothers me," she confessed. "And I know it shouldn't. Romney's money bothers me. He has all this money and he looks too preppy for me."

Kinard and her husband, a retired school principal, are planning to make their final McCain-versus-Thompson decision the old-fashioned way -- by consulting the oracles. "We don't want Huckabee or Romney to win another primary," she said. "We're going to look at some poll numbers."