An unwavering focus on national security propelled McCain to a narrow, but sweet victory eight years after his brutal loss to Bush there in 2000. 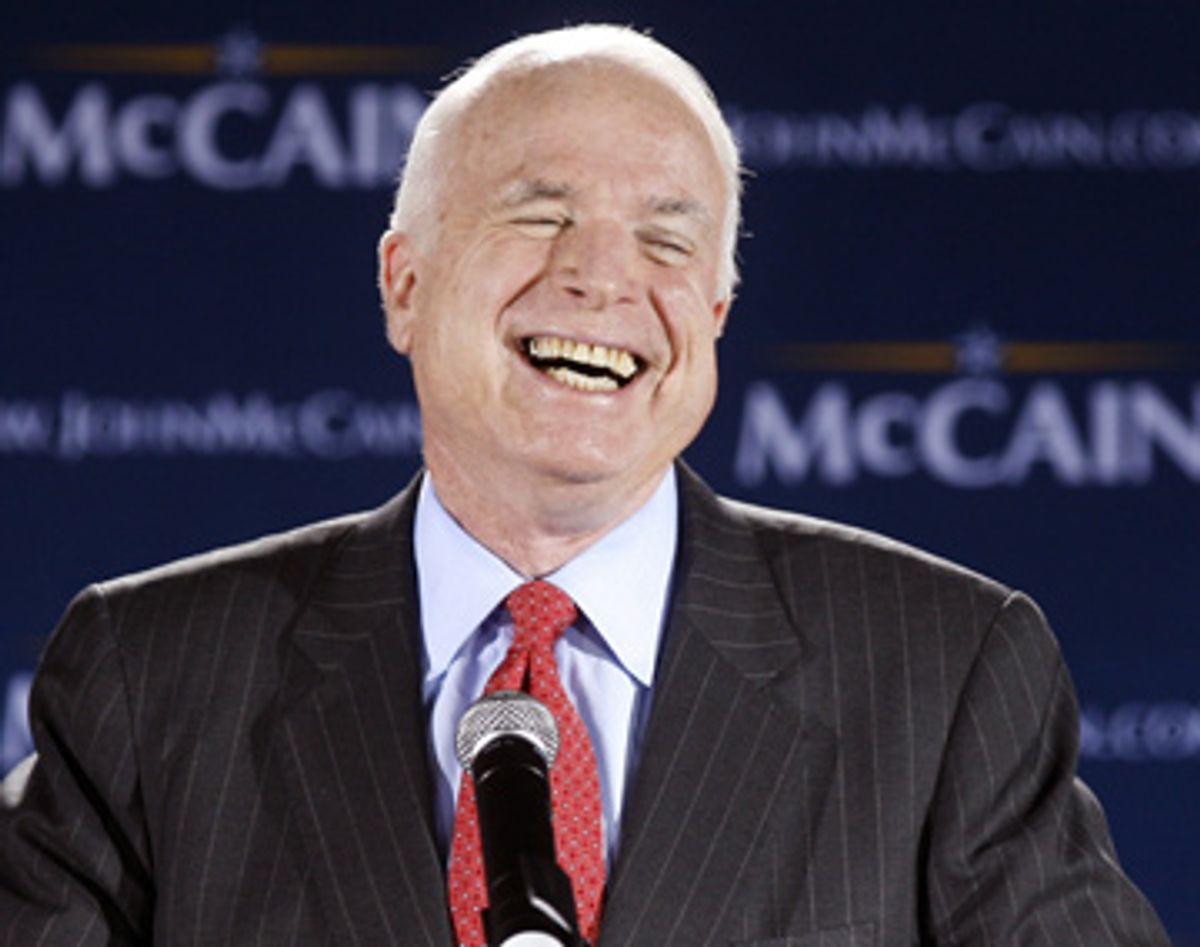 The last rally John McCain held in South Carolina took place in the hangar of a historic aircraft carrier docked just out of town, the USS Yorktown. The scene was the perfect distillation of all McCain's strengths and weaknesses: the 71-year-old candidate on a famous ship, standing under a World War II-era propeller plane, surrounded by a bunch of veterans as old as he is, but all the while cracking jokes, roaming the stage with vigor and, most of all, talking tough about terrorism.

A night later, after winning the state where his campaign against President Bush suffered mortal wounds eight years ago, McCain held a victory party at the Citadel, the nation's largest military college not run by the U.S. government (and a reminder of how patriotic -- and militaristic -- much of this state is). If he goes on to win the Republican nomination and the White House, McCain would be, like the man who beat him in 2000, a war president. Unlike Bush, he knows that going in. "I am running for president of the United States of America because I believe the transcendent challenge of the 21st century is the struggle against radical Islamic extremism, which takes many forms," McCain said on the Yorktown. "It's the greatest force of evil we've ever faced that is bent on our destruction and our extinction. And, my friends, we will never surrender. They will."

By the time the "First in the South" primary was over, McCain had pulled together just enough support from coastal moderates, retired veterans and upstate evangelicals to keep Mike Huckabee from overtaking him in the final days of the race. The momentum wasn't going McCain's way, after Mitt Romney beat him in Michigan on Jan. 15; a few days more, and Huckabee might have won. It poured all day around the state, and the dismal weather slid through freezing rain and sleet on its way to snow in Huckabee's devout strongholds upstate, which couldn't have helped him.

But while McCain worked hard to win over the GOP establishment that went for Bush last time, it was his unwavering focus on national security that helped him the most. "The biggest difference between this campaign and 2000 is the extremist Islamic terrorists," said South Carolina House Speaker Bobby Harrell, who backed Bush eight years ago and joined McCain this time. "In any race in South Carolina, I think you need the military retiree vote," said Hayward Hutson, another state House member who switched from Bush to McCain, and a 1958 West Point graduate. Retirees "know what it is to put yourself at risk."

None of the other candidates could come close to matching McCain's personal or legislative history on national security, and they basically didn't try. Rudy Giuliani, who claims his experience as New York's mayor on 9/11 taught him about dealing with terrorists, didn't compete here. Romney, who spent millions in South Carolina last year, finished fourth behind Fred Thompson; he pulled out of the state after winning Michigan and then tried to argue that he'd never been trying that hard here to begin with. He won a caucus in Nevada that didn't award any delegates, but happily added it to his Olympic-inspired primary medal count (which includes only one win -- er, gold -- in a state contested by his rivals). Romney and Giuliani both spent Saturday night in Florida, where the focus could switch back to taxes and economic issues. Huckabee, in his concession speech, leaned on his economic message and mostly stayed away from social issues.

For McCain and his advisors, some of whom still carried grudges from the Bush campaign, the victory was a very long-delayed gratification. "Eight years ago today, we pretty well knew that we were not going to win South Carolina," McCain told reporters on his bus Friday. "I knew we had difficulty, I can sense a crowd." Heading into Saturday's vote, he said he was as confident about South Carolina as he had been 11 days earlier in New Hampshire. (His main gripe, actually, was that he'd gotten sick of "Johnny B. Goode," played at the end of his rallies. "If I had my way, they'd play something by ABBA, maybe 'Take a Chance on Me,'" he said, apparently dead serious. Advisors obliged, playing the song at the final campaign stop.)

Still, the win clearly felt good. McCain marched onstage Saturday night to the theme song from "Rocky," unable to wipe a grin off his face. "Thank you, my friends, and thank you, South Carolina, for bringing us across the finish line first in the 'First in the South' primary," he said. "It took us a while, but what's eight years among friends."

The race was close enough that with three-quarters of the actual votes counted, none of the TV networks or wire services would declare a winner. As supporters at the Citadel worked their way through all the beer, and most of the other booze, at the party's cash bars, they chanted, "Call it! Call it!" at the Fox News anchors on the projection screen showing the results. When the network finally obliged, it was almost anticlimactic; McCain never trailed as the votes trickled in.

By South Carolina standards, things were so tame the local consultants working on the race must have been bored. Eight years ago, Bush allies circulated fliers accusing McCain of fathering a black baby out of wedlock; this time, McCain sent around his own mailings featuring the child in question (actually his daughter Bridget, adopted from Bangladesh). A few mailings said McCain favored medical experiments on unborn children, a distorted reference to his support for embryonic stem cell research. But with so many candidates in the field to target, the dirty tricksters couldn't seem to stay focused. Huckabee allies went after Thompson, who took enough conservative votes by attacking Huckabee that Huckabee's aides accused him of working for McCain. Someone circulated some nasty stuff about Romney's Mormonism. McCain, though he formed a "Truth Squad" that seemed poised to both fend off attacks and make him into a sympathetic victim, didn't really suffer too much. Huckabee, in his speech, thanked McCain for running a clean campaign.

Republicans always prefer having a front-runner over a wide-open contest, and if McCain keeps winning, he can lock himself into that role. Florida votes in 10 days, which feels like an eternity in this year's compressed calendar, so the polls showing a four-way tie there aren't likely to stay that way. Every Republican nominee since Ronald Reagan has gotten there by winning South Carolina first. Even McCain admits that pattern might not hold up in a year like this one. But the feeling in his camp that he is on his way to winning -- which built after Huckabee beat Romney in Iowa three weeks ago -- only seemed to be growing stronger. "We have a ways to go, of course," McCain said. "There are some tough contests ahead, starting tomorrow in the state of Florida. But, my friends, we are well on our way tonight. And I feel very good about our chances."

As the crowd filtered out of the hall and McCain hugged his friends and family onstage, the sound system boomed out one last song: ABBA, not Chuck Berry. Winning has its privileges, after all.