The knives come out in South Carolina

On Martin Luther King Day, the Democrats have their nastiest debate yet as the Clinton and Obama spat gets personal. 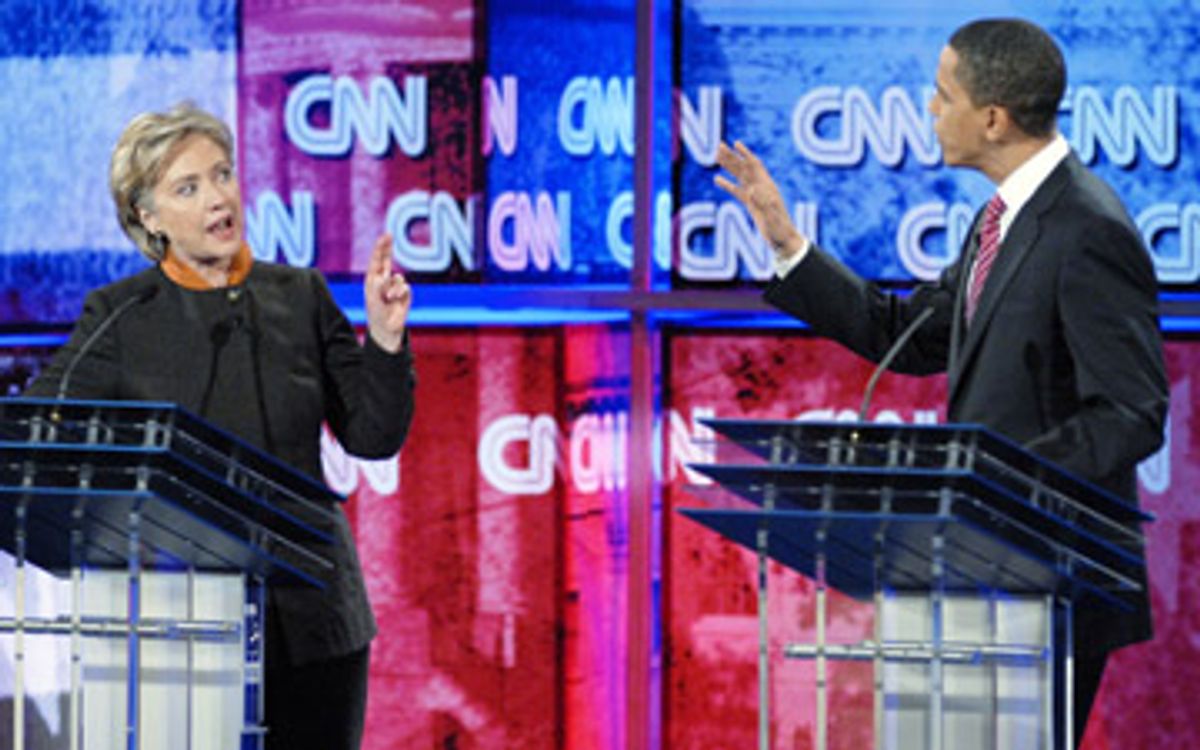 In an inspiring tribute to the nonviolent legacy of Martin Luther King, whose holiday they honored, the three leading Democratic candidates talked calmly and dispassionately about their policy proposals Monday night in a two-hour CNN debate. Of course, there was also that seven-minute interlude when Hillary Clinton and Barack Obama stood gesturing at each other angrily from behind their rival lecterns as they all but shouted at each other, "Your mother wears combat boots."

The final Democratic debate before Saturday's South Carolina primary was, in truth, about as ugly as you could get, given that the three candidates on the stage agreed with each other on 95 percent of the issues and have no long histories of personal animosity. The winner -- partly by default -- was John Edwards, who managed to stay above the fray except when he would suddenly swoop down to score a debating point against a surprised rival. The reason that Clinton and Obama allowed themselves the luxury of turning the evening into a "this time it's personal" face-off was that they no longer feared losing votes to the underfunded Edwards, already badly weakened by third-place finishes in New Hampshire and Nevada.

For those who crave the blood sport aspects of politics, it was a night to remember. Clinton demonstrated that she has the ability to pile one attack on top of another without pausing for breath. (Obama's purported sins ranged from having uttered a few complimentary sentences about Ronald Reagan last week to harboring a few small inconsistencies in his record of staunch opposition to the Iraq war.)

Finally, like a soda jerk adding the cherry atop an ice cream sundae, Clinton referred to the time when Obama was "practicing law and representing your contributor [Antoin] Rezko in his slum landlord business in inner-city Chicago." Rezko -- who is certain to become a familiar figure in Republican attack ads if Obama is the Democratic nominee -- raised more than $150,000 for Obama's political campaigns (some of the money was later donated to charity) and aided the Obamas in a 2005 real-estate transaction. Rezko was indicted in 2006 by the federal government on totally unrelated corruption charges and goes to trial next month.

But Obama demonstrated that (unlike turn-the-other-cheek insurgents like Bill Bradley in 2000) he could fight back. Referring to his years as a community organizer in Chicago, Obama said to Clinton, "While I was working on those streets watching those folks see their jobs shift overseas, you were a corporate lawyer sitting on the board of Wal-Mart." Also in a telling reference to the tag-team attacks from Bill and Hillary Clinton, Obama snapped, "Well, I can't tell who I'm running against sometimes."

After fuming in silence, a portrait in irrelevance, Edwards finally got the last word and he ran with it. "Are there three people in this debate -- not two?" he asked. "And I also want to know ... on behalf of the voters here in South Carolina -- this kind of squabbling -- how many children is this going to get healthcare? How many people are going to get an education from this? How many kids are going to college because of this?"

With only one more Democratic donnybrook (Jan. 31 in Los Angeles) remaining before voters in 22 states, including California and New York, go to the polls on Woozy Tuesday Feb. 5, elaborate debate score cards have limited utility. It is difficult to sort out which of the attack lines resonated with voters and which were virtually unintelligible.

Did Democrats cringe after hearing about Clinton's service on the Wal-Mart board because the company pays paltry wages and offers skimpy benefits? Or did they react positively because they associate Wal-Mart with low prices? Did anyone other than political pros and the campaign press corps get the reference to Rezko? Obama, for instance, may be more vulnerable over the more than 100 times that he voted "present" in the Illinois state Senate, since that parliamentary gambit is difficult to explain to uninitiated voters.

The hardest thing to calculate are the political ramifications surrounding Bill Clinton's increasingly prominent role in his wife's campaign. Early in the pie-throwing segment of the debate, Obama complained, "One of the things that happened in the course of this campaign ... [is] a set of assertions by Sen. Clinton, as well as her husband, that are not factually accurate." What Obama was, in essence, saying is, "Buy one exaggerator (Hillary) and get one free (Bill)."

Perhaps it was inevitable that any serious challenger to the former first lady would have to take on the whole Clinton machine. It would be intriguing to ferret out what the internal Obama polling is saying about the former president's involvement in the campaign. What we do know is that a national CBS News/New York Times poll, conducted after the New Hampshire primary that Hillary won, found that 43 percent of Democratic primary voters believe that it is a "bad thing" for just two families (the Bushes and the Clintons) to share the White House for 20 years.

The Democrats have long prided themselves on the history-making aspects of their presidential field. But Obama either stumbled or made an odd, caustic joke late in the debate when he burbled about the epic nature of "a race where you've got an African-American and a woman ... and John." You could see a visibly miffed Edwards at that moment wondering whether to strike Obama from his Christmas list.

But after Monday's mayhem in Myrtle Beach, the pride was -- at least momentarily -- gone. All that remained were the scars from a family argument that had turned horribly awry. It was about as nasty a debate as we have seen in this presidential cycle -- and Mitt Romney was not even in the state.