He was young, he was beautiful, and he had a pure gift for playing troubled souls -- which makes the actor's death all the more tragic. 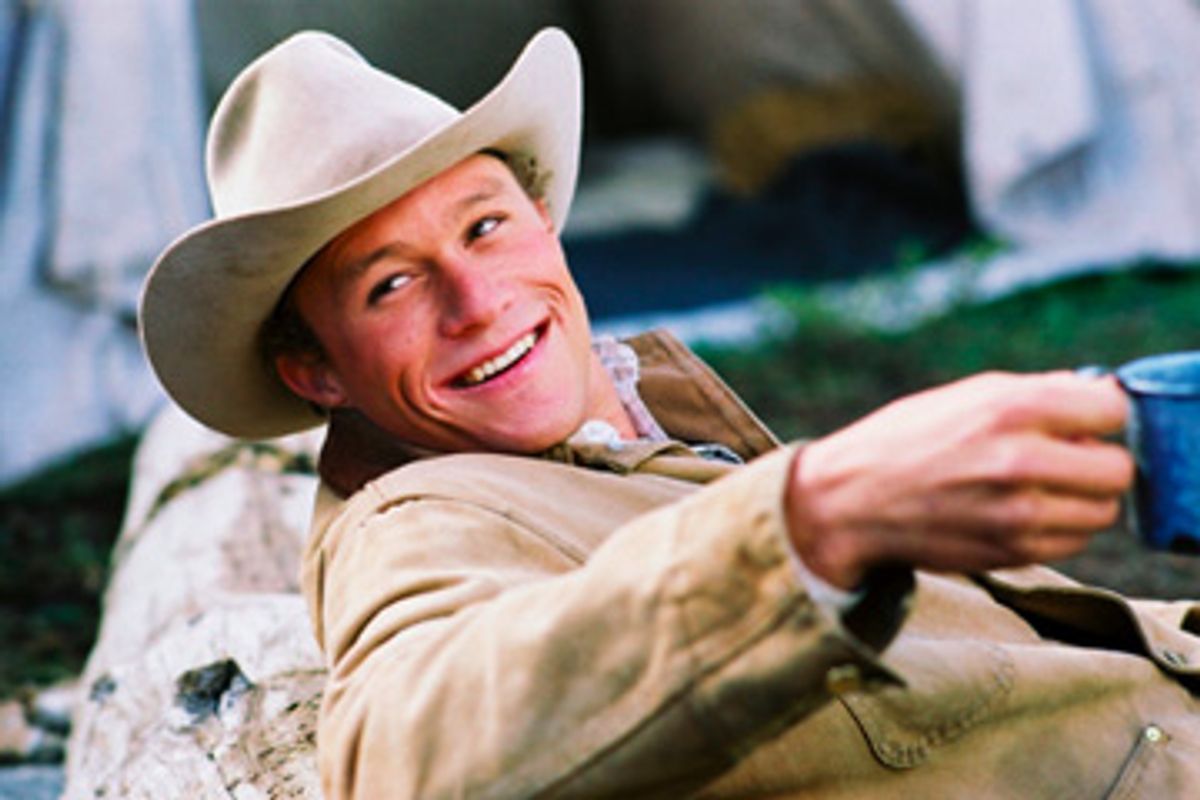 Maybe it wasn't a coincidence that he was so good at playing troubled souls. Addicts. Suicides. Victims. The cause of Heath Ledger's death, at age 28, on Jan. 22 is still unknown, but the circumstances -- naked, near pills -- paint a tragic last picture of a man who had an uncanny talent for playing tragic people.

Why, then, does the thought of Heath Ledger so often make us smile? Is it just that he was so beautiful and young? Or was it that he was radiant, an actor who could invite the audience to curl up inside all the pain within his characters, the better to get close to their warmth, their depth, their humanity?

Ledger began his career as a teenager, doing television and film work in his native Australia. His breakthrough came in the role of romantic, eccentric Patrick Verona in 1999's "10 Things I Hate About You." It was the first movie I ever saw him in, and I'll never forget sitting in that crowded preview audience, experiencing the all too rare thrill of watching a star being made. Ledger wasn't just another teen-comedy pretty boy, although he was, undeniably, very pretty. As the less-dangerous-than-he-looks leading man, he was broody, funny, sexier than a guy playing a high schooler ought to be, and completely magnetic.

I wasn't the only one who noticed. He immediately ascended to blockbuster fare like "The Patriot" (2000), in which he played Mel Gibson's impassioned, doomed son. He took top billing soon after, in 2001's "A Knight's Tale." With Ledger staring intensely from the posters, the film boldly promised, "He will rock you." It's a promise Hollywood doesn't make about anyone less than a superstar. He was a knight in muddy armor; the movie itself is a weird heap of anachronistic drivel. I should know; I've seen it three times. There's just something about the charm of its star.

Ledger could have parlayed his roguish good looks and easy, action-ready muscle power into a long roster of utter dreck. He sometimes did, too, in clunkers like 2002's "The Four Feathers" and 2005's "The Brothers Grimm."

He often didn't, though. He went for smaller roles and riskier films. He played the tormented prison guard Sonny in "Monster's Ball" (2002), burning with anguish over his life, over his father's disappointment in him. He took on his toughest, and arguably best, role as the taciturn, closeted Ennis Del Mar in 2005's "Brokeback Mountain," for which he earned his sole Academy Award nomination. Another actor might have gone for a showier performance. Another actor might have won that Oscar, or at least a Golden Globe. But Ledger instead chose to stay fiercely true to the character, to play him with such devastating restraint, such roiling inner turmoil, that I can never think of him in those last few moments of the film without welling up.

When he and his "Brokeback" costar Michelle Williams moved to my Brooklyn, N.Y., neighborhood in 2005, my little corner of the borough went on full-throttle Heath watch. Friends spotted him drinking at restaurants on Smith Street or toting their daughter, Matilda, around Boerum Hill. The owners of the wine shop breathlessly reported his presence among their racks. We were not our usual blasé, jaded selves with Heath Ledger. We were starstruck.

Not that he spent much time cooling his heels at the local doughnut house. He crammed his résumé with new roles. He continued to challenge himself, to mix lighter fare like "Casanova" (2005) with small indies like "Candy" (2006), in which he plumbed the selfish, sweaty depths of heroin addiction. He bravely took on the iconic, channeling Dylan in last year's "I'm Not There," and painting on a mile-wide smile as the Joker in the forthcoming Batman sequel "The Dark Knight."

Yet for all his achievements, one of his first obits referred to him flippantly as "Heartthrob Heath Ledger." Though a legion of weak-kneed fans might not disagree with the term, it sells his talent far too short. He didn't just make hearts throb. He made them break.

He and Williams parted ways last fall. Ledger, who had been battling a bout of pneumonia, recently admitted to the New York Times that he was "stressed out" and had taken Ambien to combat insomnia. He was seen dining with his new girlfriend two nights ago. Then something happened.

At 3:30 p.m. on Jan. 22, a massage therapist and a housekeeper found his lifeless body in bed in an apartment in SoHo. Had the pain that suffused so many of his performances become too real? I hope he found peace. I wish an equal measure of it for those who loved him. The loss for us as moviegoers is big. The void for a 2-year-old girl without her father today is incalculable.

When I remember him -- a word that still doesn't sound real or right yet -- I will see a montage in my mind of indelible on-screen moments. I'll see him, blissfully bored, waving his hand through a Bunsen burner flame in "10 Things I Hate About You." I'll see him clutching a bloodstained shirt in "Brokeback Mountain," his face crumpled in haunted longing. I'll see him declaring his love with his last, self-destructive breath in "Monster's Ball." I'll see a flawless face that conveyed the rage, loss, menace and profound ardor of such fascinating, flawed characters. And I will be desolate and disappointed and angry as hell that there will be no more new moments to come.