Contrary to what many readers think, I am not endorsing Clinton or Obama for president -- and have spared neither candidate my criticism. 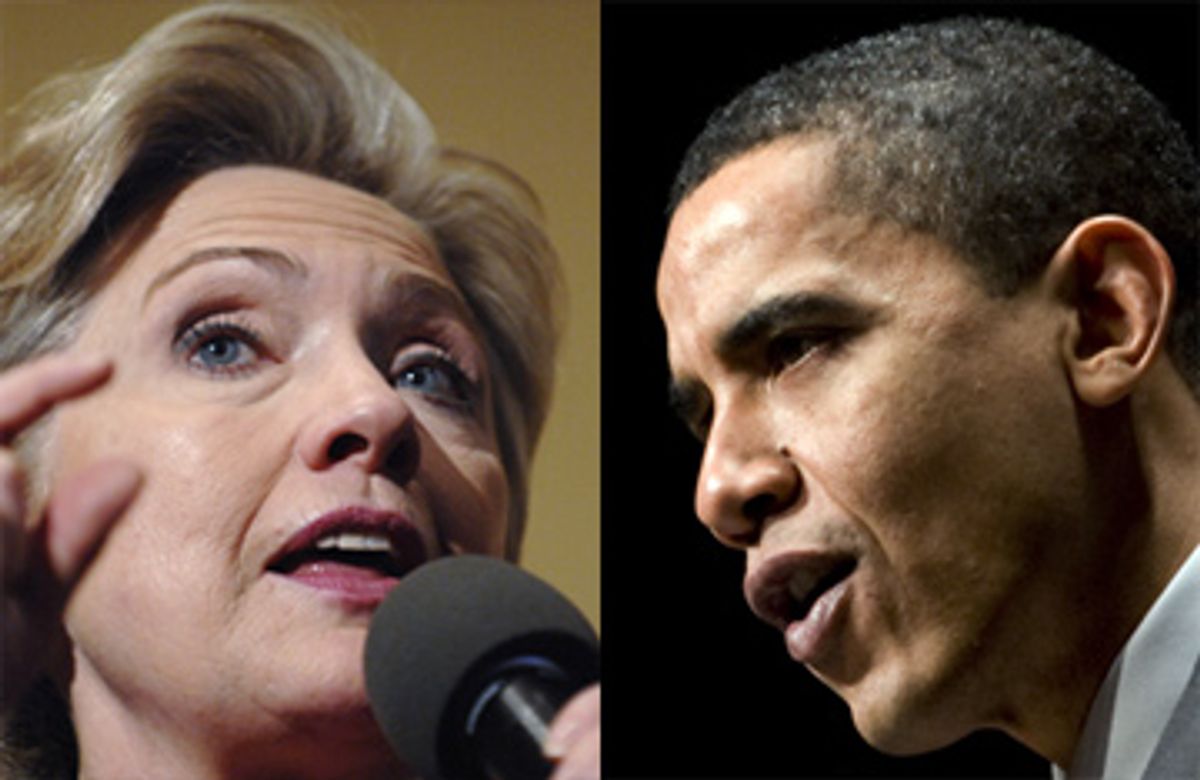 While I rarely respond in my column to complaining letters, the latest barrage from disgruntled readers seems to require an answer. Many of those correspondents asked thoughtful questions about my comments on the Democratic primary. A surprising number seem unable to tolerate so much as a skeptical word about Barack Obama:

"Why don't you perform a few hit pieces on Hillary, too? Just to balance thing out ... Shame on the editors of Salon to allow Conason to continue his blatantly biased pro-Billary rants ... You have surely pissed away your reputation as a journalist with this hideous anti-Obama garbage ... I'm so angry that this filth is in my highly esteemed Salon ... What is going on with Joe Conason? ... I really used to respect you, but seriously, how many of these pro-Hillary, anti-everyone else articles are we going to see?"

Several readers evidently want to know which candidate I favor, assuming that I have to choose someone. "Next time, tell us who you are supporting," pleads one, while another complains about "Conason's silence on the other candidates. He's spoken about Huckabee and Romney, but what about Hillary Clinton or John Edwards ... I just wish Conason would come out and [say] what he thought of all the candidates." Of course, even the angriest messages from readers are just part of the job. I have my say and they have theirs. But considering how much I value the thousands of Salon readers who have proved so loyal over the past decade or more, I decided to reply.

Like most commentators, I don't have the time or inclination to write about all the candidates. I usually focus on those who strike me as serious contenders. Sometimes I can be wrong in that assessment, as I may have been when choosing to write several columns on Rudy Giuliani. But Rudy isn't gone quite yet, and he was certainly an amusing subject while he sat atop the national polls. As for Hillary Clinton, I've probably written more critical words about her in the past few years than about anybody except Giuliani -- certainly far more than I have written about Barack Obama. One of my toughest columns on any campaign this year concerned her and her chief strategist, Mark Penn, his huge P.R. company, and how badly his firm's union-busting reflected on Clinton. (As I noted in my post-Iowa column, Penn has not exactly disproved my doubts.)

I haven't spared Clinton for her mistakes on the war, either. In the Observer I have strongly criticized her shifting positions and her reluctance to acknowledge her mistake in voting for the Iraq war resolution. "Time for Hillary to Make Amends" was the headline on my Observer column of Feb. 18, 2007, just as she was starting her presidential campaign. (All my Observer columns can be found in this archive.)

I called her on the contradiction in her positions: "Today, she says that she wouldn't have voted to authorize the use of force had she known in September 2002 what we all know now about the mythical arsenal of mass destruction. Two years ago, she said that she felt 'no regrets' about casting that same vote. And yet she remains reluctant to confess -- as former Senator John Edwards finally did -- that she was wrong ...

"She would have fewer difficulties as a Presidential candidate -- and her opponents would have fewer opportunities -- if she had effectively addressed that error last year. Instead, she listened to the same circle of strategists and pollsters who stupidly warned her and other Democrats not to oppose the war too vocally, lest they appear 'weak' and 'defeatist.'

"Is Senator Clinton strong enough to reject that kind of bad advice in the future?"

If I ever made an endorsement, it wouldn't sound like that.

Not long after that column, I wrote on the fourth anniversary of the Iraq invasion, praising Obama for speaking "a few words of honesty and sense" about ending the war on "Larry King Live." It wasn't the last time I would praise him -- but it didn't mean I'd never criticize him.

Since then my columns on Clinton and Obama have discussed some of the virtues and defects of both candidates. Last July, for example, discussing their exaggerated disagreements over foreign policy, I praised Obama's campaign for its "full complement of specific, sophisticated foreign policy plans designed to make the world more secure, and more decent as well," and wrote that he deserved "great credit for his courageous dismissal of the conventional stupidities of Washington's conservative establishment and the Beltway media." That column concluded: "Nobody would have voted for Bill Clinton against George Herbert Walker Bush if experience and caution were the only values that mattered. To end an era of stagnation and decline, our newly elected policymakers will need a touch of audacity, too."

Like Paul Krugman, however, I didn't appreciate Obama's alarmist tactics on Social Security -- which irritated me all the more because he echoed the right-wing propaganda I had exposed in "The Raw Deal," my 2005 book on privatization. But in the Observer last Nov. 6, I also suggested that "at least part of the blame lies with Mrs. Clinton, whose reluctance to speak forthrightly about Social Security dates back to the Bush privatization campaign. As the most celebrated Democrat in the Senate and a likely presidential candidate, she ought to have taken a leading role in the fight to preserve her party's keystone legislation." I explored the same theme in analyzing Obama's victory in Iowa, where I noted that "there turned out to be more to him than hope."

In fact, I've expressed disappointment in Clinton's excessive caution more than once. Last October, I urged her to "speak forthrightly on issues of war, terror and constitutional authority ... For a senator who went along with too many of that regime's excesses, beginning with the vote to authorize war on Iraq, articulating a credible critique of the current presidency is essential."

I could continue with many more examples, but the point of this exercise should be obvious by now. I don't feel obliged to make any endorsements, and readers shouldn't bother to look for hidden meanings because there aren't any. Everyone is free to disagree and blast away in the letters, but please don't accuse me of giving anybody an easy ride, because I haven't.

I perceive strengths and weaknesses in both of the leading Democrats. They're politicians and human beings, not angels or devils. I can certainly imagine voting for either of them in the general election.

And if you must know, the candidate who inspired the most confidence -- in me, at least -- decided not to run this year. That has made it even simpler to just call 'em as I see 'em.