Did his victory in Iowa and strong showing in New Hampshire really "put to rest the notion that a black candidate can't win in America"? 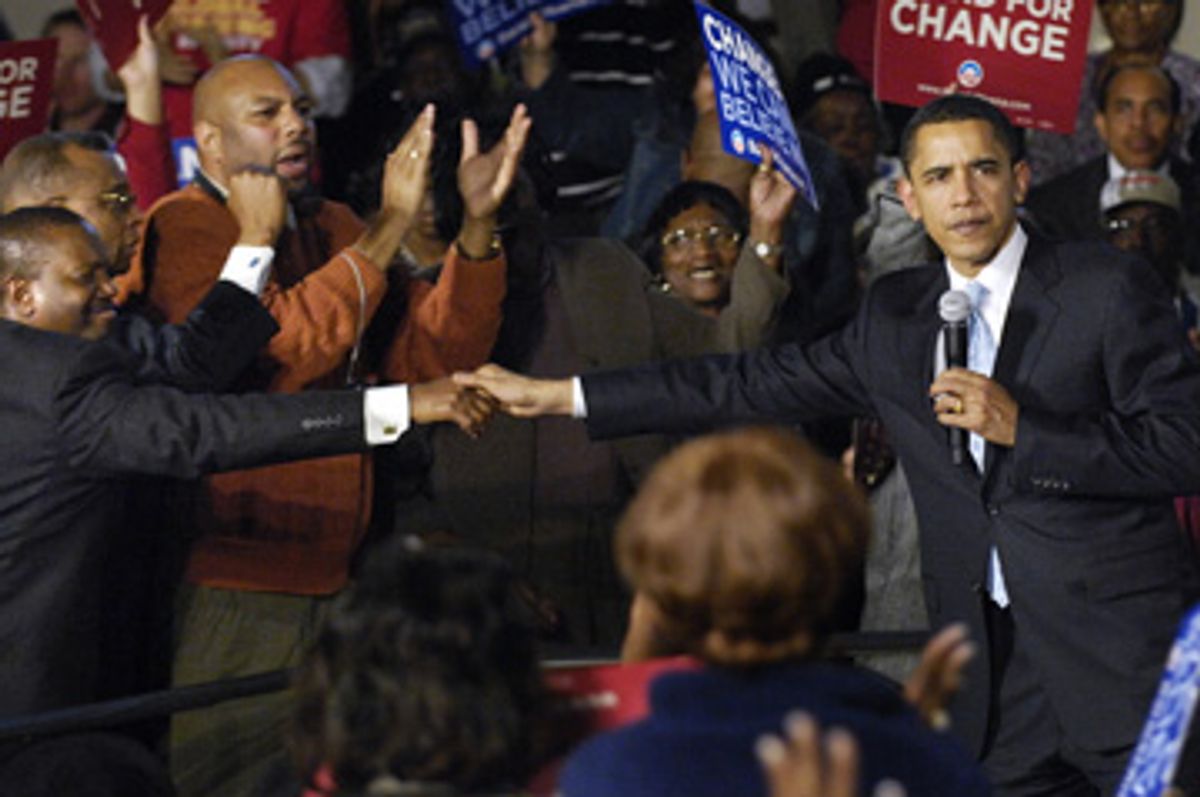 Herbert Fielding, who was one of the three African-Americans who broke the color line in the South Carolina Legislature in 1970, hails from the generation when funeral homes in the black community were a hub for politics. Seated behind the desk in his small office in the downtown mortuary that his father founded in 1912, the 84-year-old Fielding explained Wednesday morning why he had endorsed Barack Obama early last year, at a time when most establishment politicians were signing on with Hillary Clinton.

Speaking in a deliberate, all-the-time-in-the-world tone as his hands fiddled with the flash drive for his computer, Fielding said, "My main reason for getting on the Obama campaign early was when I realized that Obama was facing the same things as a black candidate that I heard when I was a black candidate for the South Carolina Legislature in 1952 and 1968." (That is no typo -- 1952 was a Jim Crow year when fewer than 1,000 blacks were registered to vote in Charleston County, while even in 1968 his campaign pushed the limits of the Voting Rights Act.) "I heard the same thing in 1970 when I finally got elected to the Legislature," he continued. "I got so angry when I heard some of my colleagues who had been through the same things I had been through getting to the general assembly say, 'Obama can't be elected. He's a black man.'"

"Damn," Fielding said, somehow adding a note of dignity to the epithet. "I didn't want to go through it again. So I decided to do anything I could to get Senator Obama elected."

Judging from polls and political body language (Hillary Clinton left the state for two days after Monday night's debate in Myrtle Beach), Obama is likely to prevail in Saturday's South Carolina primary -- the last contest sanctioned by the Democratic National Committee before half the nation votes on Woozy Tuesday Feb. 5. There is a danger in over-relying on voter surveys -- see the polling debacle in the New Hampshire primary where no one had anticipated a Clinton victory. But the widespread expectation here is that Obama's victory on Saturday will be fueled by a lopsided margin among black voters, who are likely to comprise at least half the primary electorate.

Even the hyper-partisan Bill Clinton appeared to concede the state Wednesday -- or else adroitly played the game of lowering expectations. In a lunchtime appearance at Hugger's restaurant here (on a day when his wife campaigned in Pennsylvania and New Jersey), Clinton said in response to the only question about race during a lengthy question-and-answer session, "As far as I can tell ... neither Senator Obama nor Hillary have lost votes because of their race or gender. They are getting votes, to be sure, because of their race and gender -- which is why people tell me that Hillary doesn't have a chance to win here."

His Hillary-can't-win-here assessment got lost in the shuffle after reporters lured Clinton into a mini-press conference as he shook hands after his talk. What instead made news was the former president's exasperated reaction to being asked about former South Carolina Democratic chairman Dick Harpootlian's likening the Clintons' campaign tactics to those of native son Republican Lee Atwater. Clinton said, in his latest adventure in veering off-message, "They are feeding you this because they know this is what you want to cover ... and the Obama people know it -- and they just spin you on this and you happily go along."

But the roots of Obama's strength in the upcoming primary have nothing to do with false controversies like this, which are a sad reflection of the he-said-then-he-responded style of media coverage. Obama's secret weapon in South Carolina appears to be that he was anointed by white voters in the first caucus and the first primary.

"Barack's victory in Iowa and great showing in New Hampshire put to rest the notion that a black candidate can't win in America," said Rick Wade, a senior advisor to Obama specializing in minority voters. Bruce Ransom, a political science professor at Clemson University, echoed this interpretation when he said that Obama's performance in these two white-bread states "addressed the electability issue."

Fielding, who had just voted absentee Wednesday morning at the election commission offices in North Charleston, recounted that some of the people he recognized waiting in line "were on the Hillary team before Iowa." As he put it, "My own wife was one of those people who were strong for Hillary. But after Iowa hit, she realized that this black fellow could get elected."

Yet there is that awkward reality for Obama that in South Carolina, judging from most polls, the first-term Illinois senator is running third among white voters, behind both Clinton and John Edwards. There is the possibility -- and it is no more than that until we see the actual primary results and the exit-poll data -- that Obama's white support has been undercut by the racial subtext to the campaign. Or, as Ransom wonders, "Is it an outgrowth of a different history in South Carolina than in Iowa and New Hampshire in terms of relations between blacks and whites?"

Terry Alexander, an African-American state representative from Florence and an unabashed Clinton supporter, theorized, "Obama's Achilles' heel is that he's not talking about black issues enough. And if he talks about black issues, he'll run away the white folks." That may be a partisan exaggeration, but it does hint at the fine line that Obama has to walk. Michelle Obama (in a quote that comes courtesy of NBC) suggested in Greenville Wednesday that they had been through this all before in the 2004 Illinois Senate race. "They said he was too black," she recalled. "They said he wasn't black enough. They said there was no way that white folks from downstate would vote for a guy named Barack Obama. So you will have to forgive us if ... we've heard it all before."

Given the over-analysis of every voter who participated in Iowa, New Hampshire and even Nevada, it is difficult to remember that many of the clichés shaping the campaign coverage have yet to be tested in the other 47 states. Obama has demonstrated his appeal to white voters -- but only in atypical caucuses (Iowa and Nevada) and in a primary in one of the most affluent states in the union (New Hampshire). That is why Ransom, who is co-director of Clemson's Palmetto poll, wonders: "Does a victory in South Carolina, based on the African-American vote, undercut Obama's biracial strategy and get him tagged as a black candidate?"

Ransom stresses that no one knows for sure. But such soap-bubble speculation is lost on Herbert Fielding, who first tried to win an election in segregated South Carolina nearly a decade before Obama was born. I asked Fielding the obvious question: Did you ever think that you would live to see an African-American candidate with a realistic chance to win the White House? "No way," he said, with a chuckle of amazement in his voice. "Because at that I time I realized that an African-American had no chance of getting elected to the state Legislature."

What a difference a half-century makes.