He is attacking Barack Obama with the same playbook he used to go after Republican targets like Newt Gingrich. Are the Clintons stuck in reverse? 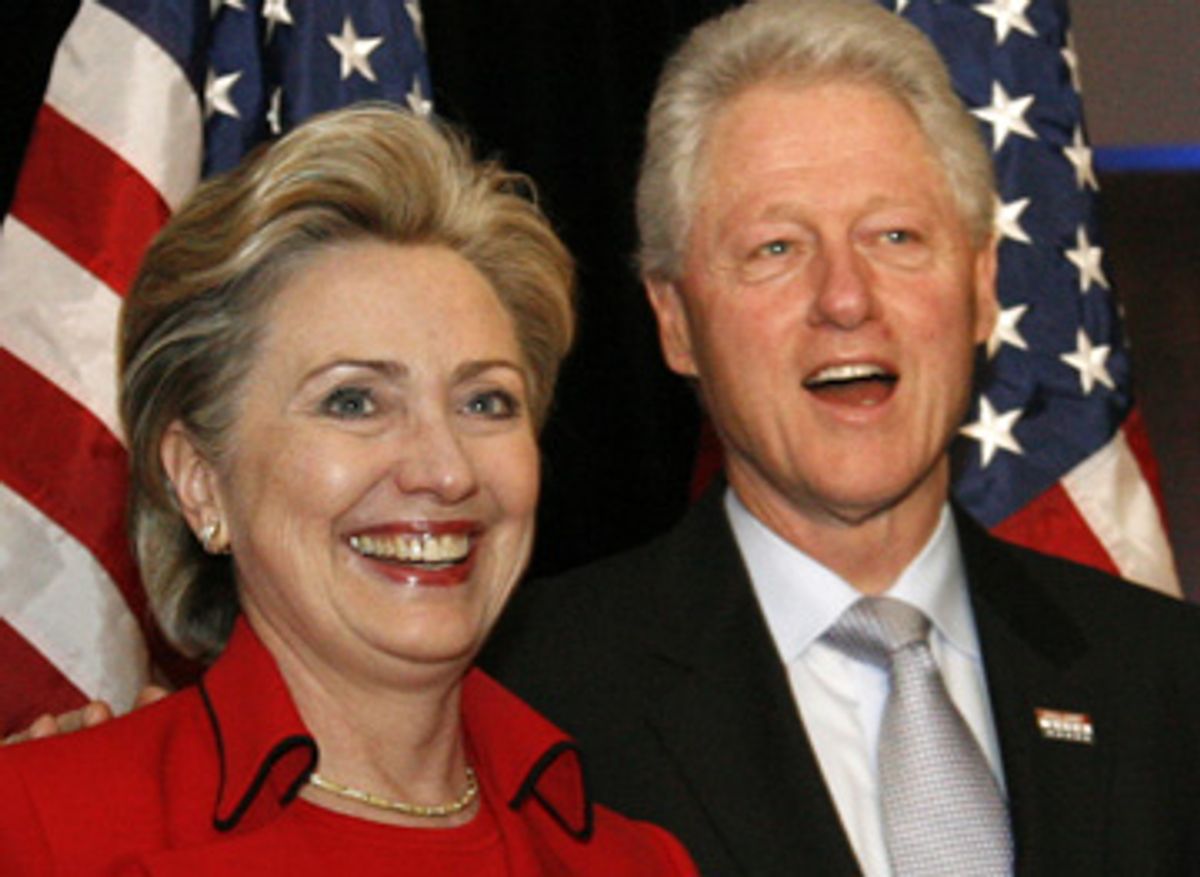 "We knew getting into this race that Barack would be competing with Senator Clinton and President Clinton at the same time," Michelle Obama wrote in a fundraising appeal e-mailed to small donors Thursday afternoon. "We expected that Bill Clinton would tout his record from the nineties and talk about Hillary's role in his past success ... What we didn't expect, at least not from our fellow Democrats, are the win-at-all-costs tactics we've seen recently."

At almost the same time Thursday, the Hillary Clinton campaign released the text of a radio ad playing on black-oriented stations in South Carolina: "This is Bill Clinton. These are tough economic times ... Who can fix healthcare, who can fix the economy, who can create new jobs, who can reduce the price of gas at the pump? Hillary can ... The 1990s were a time of prosperity. We created more than 22 million jobs, moved 8 million people out of poverty, and turned our economy around. It's time for another comeback."

With a degree of inevitability that makes Kabuki seem spontaneous, the 2008 Democratic race has become all about Bill Clinton all the time. The Comeback Kid does not need another comeback since he never really went away. But what is fascinating is that at the same time the Hillary-for-president campaign is putting Bill Clinton forward as an asset, the Obama team (judging from Michelle Obama's letter) feels free enough to attack the former president for his "win-at-all-costs tactics." Yes, the target audiences are different: random African-American radio listeners versus presumed Obama supporters. But what seems clear -- in a way that is reminiscent of that sad-eyed year 1998 -- is that Bill Clinton is once again a double-edged sword for the Democrats.

As someone who has been covering the Clintons since the 1992 campaign and as a reporter who naively dreamed of never again having to type those three fateful words -- "the Clinton marriage" -- I am struck by the continuity of Bill Clinton's public persona. The former president has never had to directly fight in a Democratic primary since he put away his final ragtag opponents (Paul Tsongas and Jerry Brown) in 1992. Sure, Clinton is stretching the truth on the attack, such as his heavy-handed use of selective quotations in trying to make the case that Obama's record of consistent opposition to the Iraq War was a "fairy tale." (Washington Post reporter Michael Dobbs fact-checks Clinton's questionable claims here.) But in using every weapon at his disposal, Clinton is following the same playbook he employed to go after choice (and far from innocent) Republican targets like Newt Gingrich. He always radiates the same sense of hurt feelings toward the press, whether it was in response to the overzealous 1992 pursuit of his Vietnam-era draft records or questions raised just this week about his campaign tactics in South Carolina.

It is easy to suspect that in Bill Clinton's own worldview, he can never catch a break. Watching him speak for more than an hour to a selected crowd of 100 Charleston Democrats Wednesday afternoon, I sensed that he was a campaign pitchman desperately trying to remain on good behavior. "Once you're like me and you're out of politics," the former president said, overstressing his nonpartisan role, "you look back on your life and realize that only two things matter -- only two -- and they should be the things that matter in this election. One is: Are people better off when you quit than when you started? And the second is: Do our children and grandchildren have a better future? The rest of it is just all stuff, just all smoke and mirrors."

Perhaps no one in politics since Ronald Reagan could pull off such a persuasive and emotionally accessible performance. "Most of my life I was the youngest person doing what I was doing," Clinton said in response to a Social Security question. "And one day I woke up and I'm the oldest guy in the room. And I could never figure out what happened in between." But then nabbed by a few reporters as he shook hands, Clinton ended up on camera repeatedly saying, "Shame on you," as he was challenged to defend the tactics being used against Obama. Needless to say, it was Clinton's short fuse that dominated the overnight stories, not the substance of his remarks in Charleston.

Psychoanalyzing Bill Clinton could have easily become Sigmund Freud's life work, so it is hard to say with any degree of certainty why the former president keeps stumbling over the footlights. Perhaps frustration that his wife lost in Iowa and seems headed for defeat here in South Carolina has dulled his celebrated political instincts. Maybe (and, yes, I know I am getting on tricky ground) he inwardly bristles at being overshadowed, consigned to that bizarre role as first spouse.

Or perhaps (and this is my own guess), Bill Clinton is out of practice and out of his era. As president and a globe-trotting former president, Clinton has been mostly insulated from the rough-and-tumble of the press scrum where ambush questions can't be avoided. Now reporters can catch him shaking hands in a small room. When he ran for president as a small-state governor in 1992, the Internet was off in the mists of the future, while cable TV and CNN were virtually synonymous. The fabled invention of the 1992 campaign war room was in response to the demands of what now seems a sleepy media age. Cosseted by handlers for 15 years, Clinton may have lost sight of the ease with which loose lips can sink ships.

Most of the rat-a-tat attacks of the last week will seem ludicrous a year from now when a new president is just beginning to redecorate the Oval Office. But the one area that deserves to be explored in depth before most Democrats vote in the primaries is Bill Clinton's role in a putative Hillary Clinton administration. When he was asked that by a voter in Charleston Wednesday, Clinton responded, "I would be there, but make no mistake about it, she would be the president. I will not be in the Cabinet, because that is not lawful. I will not be in a full-time staff job, because that is not wise."

That is a partial answer, good as far as it goes. But the controversies of the last week serve as a reminder that Bill Clinton can never be an anonymous spear carrier in the grand opera of another Clinton presidency. A successful campaign (not to mention a White House) speaks with one voice, but these days the Clinton team blasts from stereo speakers. What was the message, for example, when Bill Clinton said Wednesday that "Senator McCain is a man who Hillary admires very much"? Was this a bit of post-presidential bipartisanship or the kind of line that might show up in a Republican TV commercial in October?

It is a strange reality of politics 2008 that both parties are still partially mired in the 1980s. Republican candidates vie to be regarded as the next Ronald Reagan. Bill Clinton was the president who belatedly crafted the Democratic response to Reaganism -- taking issues like welfare, crime and the deficit off the table. But there was always a backward-looking aspect to the Clinton presidency even as he purported to build a "bridge to the 21st century."

In the midst of discussing the folly of the No Child Left Behind education program Wednesday, Bill Clinton suddenly invoked legendary Negro League baseball star Satchel Paige's dictum: "Don't look back, somebody might be gaining on you." The former president did not mean it this way, but Paige's words could easily apply to how the Clintons regard the Obama challenge on the cusp of Saturday's South Carolina primary.