The best of Sundance

Most of the big movies flopped, and the studios kept their pocketbooks closed. Good -- Sundance may have recovered its soul. 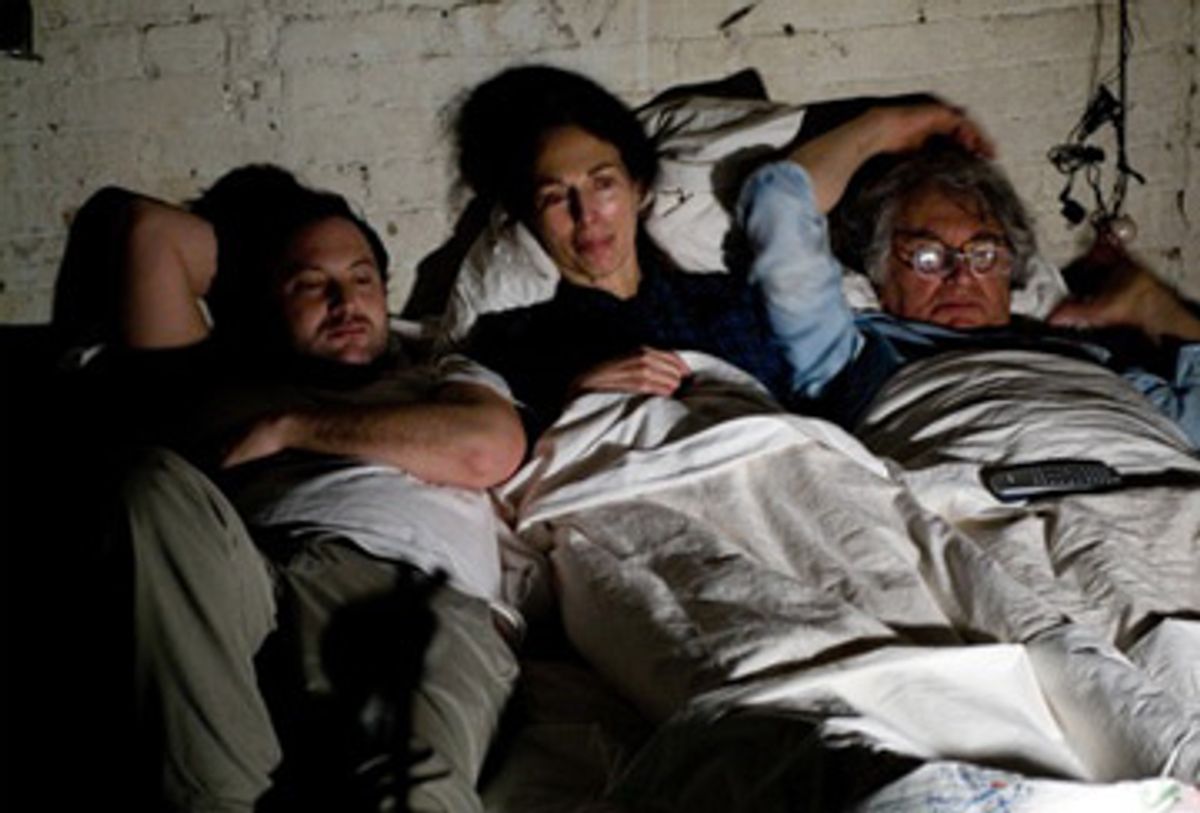 PARK CITY, Utah -- This was the year Sundance went back to basics. Though maybe not on purpose. Most of the so-called major premieres in Park City this year have been widely viewed as disappointments, and beyond the brief and bizarre bidding war that erupted over the high-school musical farce "Hamlet 2" (which went to Focus Features for $10 million), there's been far less acquisition activity than expected. It was business as usual in the gifting villas and corporate-sponsored party spaces here, but the mood at industry events has been muted and muddled, between the still-unresolved writers' strike and the death of Heath Ledger.

Pictures like "The Great Buck Howard" (a Tom Hanks production starring John Malkovich), Steven Schachter and William H. Macy's Hollywood farce "The Deal" (which pairs Macy with Meg Ryan), and Barry Levinson's "What Just Happened?" (which stars Robert De Niro, Bruce Willis and Sean Penn) came and went without stirring up much attention -- or finding buyers. Some films that arrived here with distribution deals already in place, such as Alan Ball's "Towelhead" and Morgan Spurlock's "Where in the World Is Osama bin Laden?", clearly failed to get the publicity boost their backers and creators were hoping for.

But I'm not saying this was a bad Sundance. To my own enormous surprise, in fact, I'm saying the opposite. For this festival to mean something -- something beyond the Main Street swag temples and all-night mansion parties, that is -- it must do more than repackage familiar ingredients and burnish known commodities. Sundance became whatever it is today because it was a place where exciting new films and new filmmakers, especially those modest in means but great in ambition, were introduced to a wider public. That's exactly what happened here this year. It kind of makes the ice and slush and traffic and barfing jet-setters and impossible logistics and nosebleed prices seem worthwhile. Kind of.

On Friday morning I'll be closing the books on my own personal Sundance and flying back to New York, where it's vaguely possible my kids will remember who I am. So I can afford a few moments of sentimentality as I look back over a festival full of unlikely surprises. Gosh darn it, I love this town! We won't know which films won Sundance's jury and audience prizes until Saturday, but let's face facts: We don't care either. (Sundance's prizes have long since stopped meaning anything, either artistically or commercially. If they ever did.) So why waste time waiting? I'll hand out my own prizes.

Without further ado, here are the official Beyond the Multiplex award-winners in narrative and documentary film from Sundance 2008, together with a miscellaneous list of runners-up in each category. In the highly subjective judgment of the jury (aka me), these were the year's real discoveries, the movies that had people talking excitedly as they trudged through frozen streets and jammed onto overheated shuttlebuses. Few of them are star vehicles and few of them, at this writing, have guaranteed theatrical distribution lined up. The movie world being what it is, some may never find it. But all are worth waiting for, and taken together they suggest that even in a down year (or especially then) Sundance hasn't lost its soul.

NARRATIVE GRAND PRIZE: "Momma's Man" (writer and director: Azazel Jacobs) This deceptively simple, marvelously filmed and profoundly affecting movie is first and foremost a love letter from director Jacobs to his parents, New York experimental filmmaker Ken Jacobs and painter Flo Jacobs. The senior Jacobses still live in the cluttered, eccentric Tribeca loft where their son grew up, and where this film was shot, but despite its pseudo-documentary elements "Momma's Man" is fiction. Flo and Ken Jacobs play the bewildered but loving parents of Mikey (Matt Boren), who comes home for a holiday visit and refuses to leave -- despite the fact that he has a wife and baby daughter in Los Angeles. Mikey constructs elaborate lies about what he's doing and why, as he regresses with alarming speed into a second teenagehood full of comic books, high-school-era song lyrics and desperate efforts to reconnect with old friends and old girlfriends.

For a film about a man who is arguably sliding into paralyzing depression, "Momma's Man" is a work of haunting loveliness and Proustian delicacy, shot through with unexpected humor. Jacobs' previous film, "The GoodTimes Kid," was an appealing zero-budget indie in a Jim Jarmusch vein, but "Momma's Man" is a vast leap forward. It's a film of acute perceptions, great sadness and wordless, ecstatic joy, and the one unforgettable narrative film I saw at this year's festival. (Memo to Flo Jacobs: You should have been a movie star all along. There's still time.)

DOCUMENTARY GRAND PRIZE: "Trouble the Water" (directors: Tia Lessin & Carl Deal) OK, this one's a slam dunk, and I'll be shocked if it doesn't win some of the real Sundance prizes too. The romping, stomping, electrified-house vibe at the premiere of this New Orleans documentary was one thing. Then came the baby. Kimberly Roberts, the aspiring rapper and professed "street hustler" whose home movies of Hurricane Katrina in the Ninth Ward form the heart of this film, gave birth to a daughter here in Utah, the day after the film's first screening. Somewhere amid all this movie-of-the-week drama is Tia Lessin and Carl Deal's actual movie, a transformative story about passion, resilience and heroism among the poorest residents of America's most downtrodden city.

"Baghead" Is it too early for the "mumblecore" movement to spoof itself? Evidently not, and it's a good thing too. A group of underemployed, ultra-indie filmmakers and actors head to the woods to make their own brilliant new film, in the latest work of deadpan comedy from brothers Mark and Jay Duplass ("The Puffy Chair").

"Ballast" If there were a critics' prize at Sundance, this debut feature -- a Dardenne-brothers-style tale of violence and poverty in rural Mississippi -- would win it. An impressive debut from writer-director Lance Hammer, with minimal audience potential.

"Frozen River" Another tale of rural poverty, if not quite as striking as "Ballast." Set in and around the Mohawk reservation in northern New York State, where locals sometimes smuggle illegal immigrants across the frozen St. Lawrence River. Terrific lead performance from Melissa Leo.

"Sugar" The "Half Nelson" writing-directing team of Anna Boden and Ryan Fleck return with this warm, nuanced exploration of a young Dominican baseball star's American odyssey. "Sugar" lacks the obvious cinematic verve, star power or crypto-Marxist ideology of their previous movie, but it's absolutely terrific filmmaking, and opens up a world few of us have seen before.

"The Art Star and the Sudanese Twins" Pietra Brettkelly's documentary about artist Vanessa Beecroft and her controversial adoption of orphaned -- or apparently orphaned -- Sudanese twin babies is challenging, fascinating, self-excoriating and often infuriating.

"Gonzo: The Life & Work of Dr. Hunter S. Thompson" Alex Gibney of "Enron" and the recent "Taxi to the Dark Side" tackles a biopic of the caustic, brilliant and self-destructive gonzo pioneer, without avoiding the uglier side of his personality. Every journalist should see this, either as an instructive or a cautionary example.

"Made in America" Stacy Peralta's history and prehistory of the long-running Crips-Bloods gang war in South L.A. is an unwieldy, terrifying and necessary work, exploring how a toxic stew of economic and social repression spread a poisonous self-hatred in Los Angeles' black community and led to 40 years of bloodshed, with no end in sight.

"Nerakhoon" Ace cinematographer Ellen Kuras turns co-director in this epic, quasi-experimental tale about an immigrant who fled communist-dominated Laos in the '70s for a new life in New York. Tremendously beautiful, if leisurely in pace.

"The Order of Myths" OK, this one's a ringer: I haven't see it. But several people I trust cited Margaret Brown's even-handed exploration of the still-segregated Mardi Gras traditions of Mobile, Ala. (Brown's hometown), as the best documentary they caught at Sundance this year.

"Roman Polanski: Wanted and Desired" Director Marina Zenovich reopens the notorious sex scandal that sent the great Polish-American filmmaker into exile in the late '70s. Her technique is straightforward but the results are fascinating, and the Polanski case emerges as a Rorschach-style test of moral standards and cultural prejudices. (Also, what you think happened isn't quite what really happened.)

"Stranded: I've Come From a Plane That Crashed on the Mountains" Gonzalo Arijón's riveting documentary about the famous Andes plane crash of 1972 became one of Sundance's hottest tickets. Yes, that plane crash, when members of a Uruguayan rugby team survived on a remote glacier for 72 days by eating their dead companions.