A GOP thriller in Florida 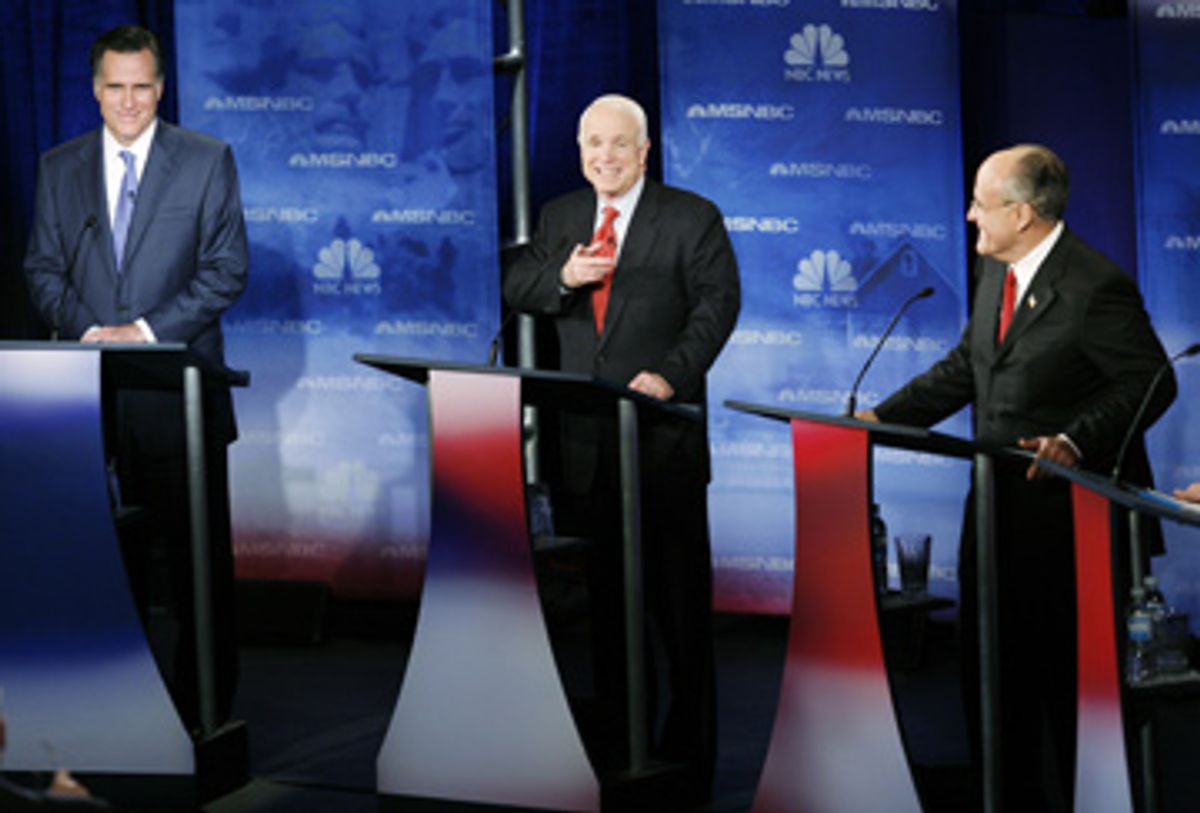 Thursday night's Republican debate -- the last one before the Florida primary, which could more or less determine the GOP nominee -- was supposed to be a crucial turning point. It could have been the last key moment for candidates to make an impression on voters, many of whom polls show are still making up their minds.

But if those voters tuned in (and didn't quickly change the channel), they probably woke up just as undecided on Friday. Among the debate's earth-shattering revelations: The economy is important to Floridians. Republicans, except for Ron Paul, support the war in Iraq. Mike Huckabee is afraid of Chuck Norris, one of his own staunchest supporters. Rudy Giuliani likes sports metaphors as much as the next candidate.

Precious little else came to light. Maybe even the candidates themselves somehow knew things would go this way: "Our televised debates normally run two hours," NBC's Brian Williams said at the outset. "However, at the request of the candidates and their campaigns, tonight's debate will be limited to 90 minutes' duration."

For a moment at the beginning of the night, at least, the event seemed more promising in terms of affecting the dynamic of the race. Mitt Romney was far looser and more at ease with himself than usual. Smiling and sounding calm, Romney did well at the outset, and looked ready to cruise on through Tuesday and the Super-Duper Tuesday to follow that. "Washington is fundamentally broken," he said, hitting his most recent campaign theme -- that only an outsider like himself can fix the nation's problems. "Washington has made promises to us over the last decade that they just haven't been able to fulfill." With the exception of Huckabee, who asked him a pointed question about gun control, no one really came after Romney. In previous debates, responding to attacks has made him seem clumsy.

Romney also got the softball of the night from NBC's Tim Russert, a big fat one over the plate about how he'd deal with Hillary Clinton "running as a team with her husband." If there's a surer way to win the hearts and minds of the GOP base than bashing Bill Clinton, it's still waiting to be unleashed from some secret laboratory run by Karl Rove. Romney knew a good thing when he heard it. "I frankly can't wait," he replied, "because the idea of Bill Clinton back in the White House with nothing to do is something I just can't imagine." It was about as close as a practicing Mormon gets to a blow-job joke.

John McCain started off the night sounding stern and looking tense. He didn't quite come across as the front-runner he has been trying to turn himself into since winning the South Carolina primary. One of the first questions he got put him on the defensive; Russert asked him whether he was as comfortable talking about the economy as he is about the war. "I'm very well versed on economics," McCain insisted -- but it seemed potentially problematic that he even had to make the point.

Meanwhile, Romney's strong start didn't last. He fumbled a question about how much of his own money he is spending on the race, blurting out, "Well, I'm not concerned about the voters," and making the dubious claim that he couldn't have asked his friends to raise money for him if he didn't kick in as much of his own cash. And for a man who got into a televised fight last week about whether lobbyists are running his campaign, Romney sounded awfully pleased with his gun-rights compromise "between pro-gun-lobby and anti-gun-lobby individuals." On national security, Romney -- and every candidate except Paul -- mostly echoed McCain's long-standing and fervent support for the troop surge in Iraq.

McCain, unsurprisingly, grew more comfortable as the ground shifted to discussion of the war. Asked if the conflict in Iraq was worth the billions of dollars and thousands of lives it has cost to date, McCain gave his most self-assured answer of the night. "The problem was not the invasion of Iraq. The problem was the mishandling of Iraq for nearly four years by [Donald] Rumsfeld. And again, I railed against that. I was criticized by Republicans ... Now we're on the right track. Now we are succeeding." He parried a question on whether the GOP could unite behind him by running through his legislative résumé: "The reason why I've had such strong support amongst independents is because they know that I'll put my country above my party every single time, and I'm proud to be a conservative." In the course of answering that question, though, he claimed he won a majority of the Republican vote in New Hampshire and South Carolina, which isn't what the exit polls found.

Huckabee and Giuliani, trailing in the polls, took a few more risks Thursday night, going after Romney and McCain in ways more aggressive than the two front-runners themselves would attempt. Huckabee pressed Romney on guns and on the amount of personal money he has poured into his campaign, though he turned the second point into a joke. He also apologized to McCain, sort of, for a crack Chuck Norris made about McCain's age last weekend. "I did hear what Chuck said. I was standing with him. And I didn't disagree with him at the time, because I was standing next to him," Huckabee said. "It's as simple as that. This is a guy who can put this foot on that side of my face, and there's nothing I can do about it."

At least two or three undecided Republican voters must've really been getting a lock on their preferred candidates by this point.

Huckabee also proved that some people still think there were weapons of mass destruction in Iraq. "Now, everybody can look back and say, 'Oh, well, we didn't find the weapons. It doesn't mean they weren't there. Just because you didn't find every Easter egg didn't mean that it wasn't planted."

Giuliani really milked his opportunity to pose a direct question to another candidate, simultaneously zinging Romney for being vague on an issue, hitting McCain for opposing a national disaster insurance fund and pandering to Florida voters worried that the next hurricane might wipe out their homes. But Giuliani's most triumphant moment came when he compared himself to the New York Giants, who somehow managed to win last weekend's NFC championship game in Wisconsin despite missing two late field goals against the Green Bay Packers. "We're going to come from behind and surprise everyone," he said. "We have them all lulled into a very false sense of security now."

In the Republican race so far, Romney has owned the sports analogies, comparing every primary win (or narrow loss) to an Olympic medal. If Giuliani doesn't manage a win in Florida, at least he can claim he added to the GOP's arsenal of sports chatter. Unfortunately, that may be the night's most lasting impact on the race.