An old-fashioned thumpin' in South Carolina

After Bill Clinton's controversial campaign swing through the state, Barack Obama routs Hillary Clinton by a 2-to-1 margin in the Democratic primary. 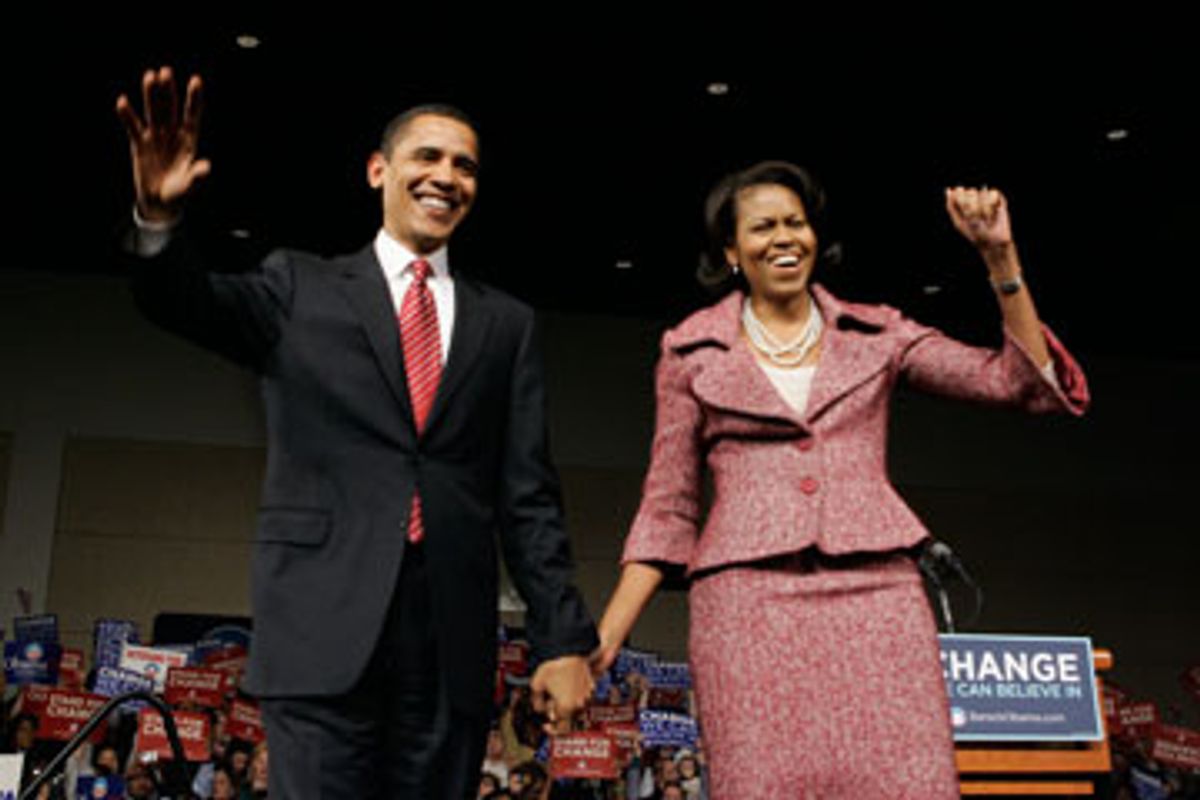 Barack Obama in his final pre-primary rally late Friday night tried to brace his fervent supporters for the struggle ahead. "Change is not easy. Change is hard," Obama warned, partly referring to his recent momentum-draining setback in New Hampshire. "After we won in Iowa, everyone was so excited ... And I think that people began to think, 'This isn't hard.' But the status quo will not give up that easily."

What a difference a day makes. Less than 24 hours later, the Democratic status quo -- personified by the Clinton family -- was all but heading for the beaches at Dunkirk. Obama stunned Hillary Clinton (and the pollsters who forecast a much narrower victory) by thumping her by better than a two-to-one margin, with John Edwards in third. The hope-mongering Illinois senator achieved a difficult distinction in a hotly contested three-way race: Obama won more half the record-setting South Carolina vote.

In his victory speech Saturday night, Obama invoked the first-in-the-nation caucuses again, but this time he gently mocked those "who said that Iowa was a fluke not to be repeated again." But Obama -- who has won in monochromatic Iowa and biracial South Carolina -- stayed with his the-road-gets-rougher message. "So this will not be easy," he cautioned. "Make no mistake what we're up against." Obama first listed the obvious targets like lobbyists and the "conventional thinking" that rates candidates by their Washington experience. But then he turned his scorn at "the idea that it's acceptable to say anything and do anything to win an election."

Bill Clinton, that last one was for you. After a week in which the former president belittled Obama at every turn -- and in the process all but overshadowed his wife -- the Bill finally came due. And it may have been big enough to tarnish the Clinton legacy for the rest of this campaign. In perhaps the most intriguing finding from the exit polls, 58 percent of South Carolina Democrats said that Bill Clinton's involvement in the campaign was "important." And that group went for Barack Obama over Hillary Clinton by a margin of 48 to 37 percent. The Obama campaign also chortled in a post-primary press release that two Greenville polling places that the former president visited Saturday went for Obama by 5-to-1 margins.

There is a message here for Hillary Clinton, though it may not be one that she relishes hearing. In Iowa, where she played the safe, cautious, sometimes robotic front-runner, she limped home third. Then in New Hampshire, as Obama surged ahead in the polls, she abandoned her trademark never-ruffled style for a brief glimpse of the raw emotions of Hillary Unplugged -- the person that her friends claim has always been there under the public mask. That makeover did not survive the trip to South Carolina, where she all but outsourced her campaign to a certain former president playing hit man.

Some longtime residents of the village called Hillaryland were privately appalled by Bill Clinton's narcissism, but they comforted themselves with the knowledge that these tactics seemed to be working. For a while it appeared that Obama's white support in South Carolina had all but evaporated. In truth, Obama's numbers rebounded enough so that he even ran ahead of his two rivals among white voters under the age of 40. Suddenly, the famous 1992 Clinton jingle -- "Buy one, get one free" -- has become a threat rather than a promise.

For John Edwards, the results (18 percent of the vote) were about what had been expected. He won just enough support to stay above the 15 percent threshold for winning convention delegates -- and avoided the humiliation of a repeat of his asterisk-like finish in the Jan. 19 Nevada caucuses. Had Edwards fallen into the 10 percent range or below in South Carolina, there was a good chance that his campaign would have been scheduling a press conference in which the candidate would make "an important announcement."

Edwards, who is collecting about $150,000 a day on the Internet (which becomes roughly $250,000 with federal matching funds), has enough money to make it through the Feb. 5 primaries, though his advertising budget will be sparse. But nothing in the results Saturday night erased his biggest deficit -- his near blackout in press coverage as TV, in particular, treats him as an interloper in the heralded Hillary versus Barack showdown. That partly explains why the dominant attitude at the heart of the Edwards campaign is a mixture of fatalism and anger at the two-faced (Clinton and Obama) media coverage.

There is a danger in drawing epic conclusions from the voting decisions of the more than 500,000 South Carolina Democrats who flocked to the polls Saturday. Not only is this a state that Republicans have carried in 10 of the last 11 presidential elections (Jimmy Carter in 1976 was the lone exception), and not only was this the rare primary in which African-Americans made up half the electorate, but South Carolina is weird for an entirely different reason. (And, no, this not a reference to the Confederate flag that still flies in a prominent place in front of the state Capitol.) South Carolina is peculiar because this is the last state in which Democrats will be exposed to the candidates and see a full diet of TV commercials before they vote.

From here on in, everything will be a blur, with a mind-numbing 22 states holding delegate contests on Woozy Tuesday Feb. 5. This will literally be a coast-to-coast Democratic showdown, since primaries will be held in a band of contiguous states stretching from Georgia to Illinois to California. (New York, New Jersey, Minnesota and Massachusetts are among the other states in the mix.)

South Carolina was real -- everything else for the next nine days will be virtual. Which is why Obama spent most of Saturday doing satellite interviews from South Carolina with local news hosts in the Feb. 5 states. From here on in, the least typical voters in the country will be those who actually attend a candidate's rally. Obama, Clinton and Edwards will have made more speeches and personally met more voters in a single county in Iowa than they probably will in the entire state of California before it votes on Feb. 5.

The speed at which the campaign calendar will move from now on defies rational thinking. The Obama and Clinton campaigns may believe that they have planned for this de facto national primary, but that probably is a form of hubris. In truth, running a campaign in this context is akin to tossing a bottle into New York harbor and praying that it eventually floats to Portugal.

Neither the Obama nor the bad-news-chills-fundraising Clinton campaign appears to have the resources for a full saturation ad buy in the Feb. 5 states, which would cost an estimated $35 million for a week of commercials. Nor is it possible to flex enough organizational muscle to effectively cover 22 states. And judging from the last two weeks, when the press gave more attention to Bill Clinton (who, appearances to the contrary, is not running for president) than to Edwards, it is not likely that media coverage will fill in the gaps. On Feb. 5, a record number of primary voters will be voting for president based on hunch, instinct and fleeting media impressions.

But none of this is to diminish the magnolia-scented sweep of Obama's triumph in South Carolina. For the second time this campaign season, the transformational politics of the 21st century were flashed on the electoral tote board as Obama -- the apostle of change -- defeated the back-to-the-1990s Clinton machine. Momentum may prove as short-lived as a fruit fly in this campaign cycle, but it is far better to be in Obama's place, reveling in victory, than to be in the Clinton camp, desperately needing to regroup, on the cusp of the Feb. 5 battle royal.