TV news is too cool

Major TV interviewers have asked presidential candidates 3,000 questions -- only six of them have been about global warming. 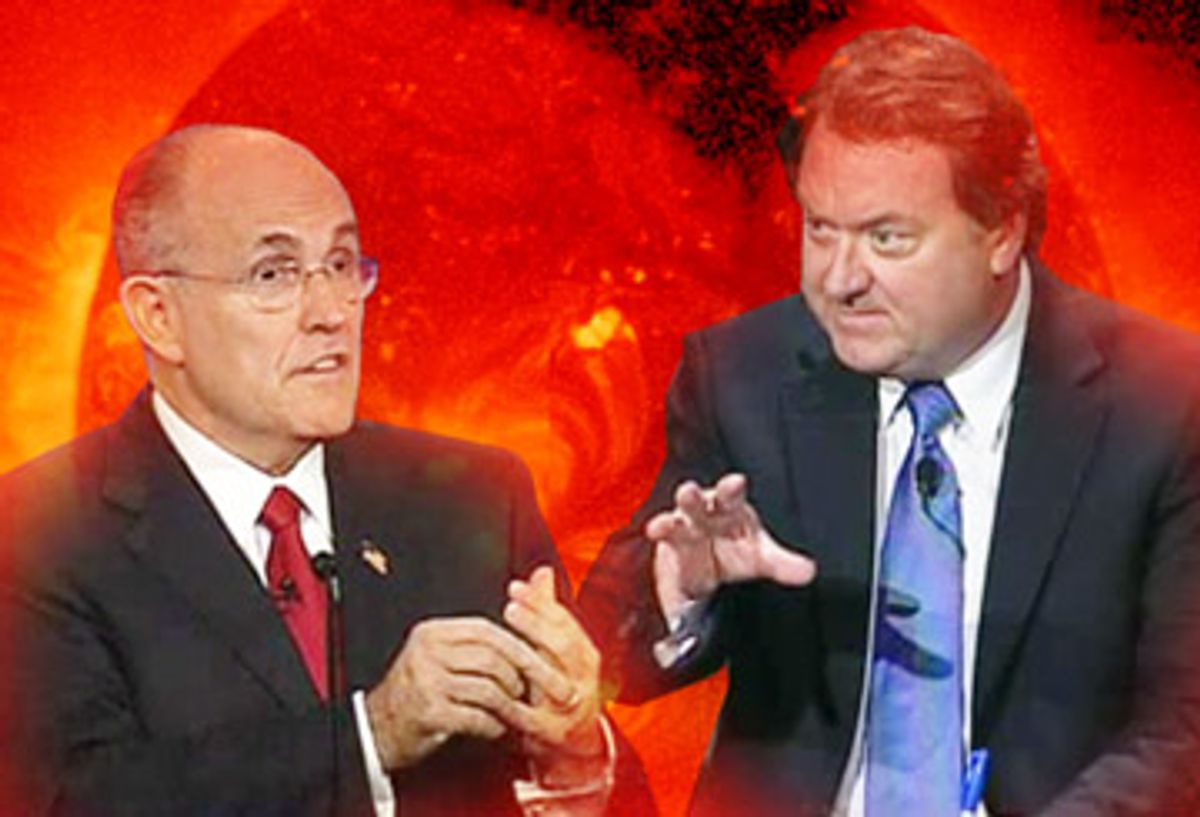 At the Republican debate Thursday night in Boca Raton, Fla., moderator Tim Russert asked Rudy Giuliani about global warming. "Florida has 1,200 miles of beautiful coast, which can be threatened with climate change, global warming, in a major way, as the world's population goes from 6 billion to 9 billion and the level of greenhouse gases doubles over the next 20 to 30 years," Russert said. "Yet you are against a mandatory cap on greenhouse gases. Why?" Giuliani's jumbled answer included a bevy of buzzwords such as "hybrid vehicles," "biofuels," "carbon sequestration" and "clean coal," before he asserted that U.S. industry would be "crushed" if we curbed our greenhouse gases.

There was nothing especially remarkable about Giuliani's response, which represents the standard conservative stall tactic when it comes to climate change: Invoke the promise of alternative energy and threaten economic collapse if any regulatory action is taken. What was surprising about the exchange is that Russert asked a question about climate change at all. The League of Conservation Voters analyzed transcripts of TV interviews and debates with the Democratic and Republican candidates. The interviews were conducted by CNN's Wolf Blitzer, ABC's George Stephanopoulos, MSNBC's Tim Russert, Fox News' Chris Wallace and CBS's Bob Schieffer. As of Jan. 25, these five prime-time journalists had conducted 171 interviews with the candidates. Of the 2,975 questions they asked them, only six mentioned the words "climate change" or "global warming." To put that in perspective: three questions mentioned UFOs.

"Global warming is unequivocally one of the biggest issues facing the nation and the planet, and one of the issues that the next president will have the greatest impact on. And yet we've gone through the longest presidential primary in our nation's history, and these reporters are ignoring the most pressing issue," says Navin Nayak, director of the global warming program of the League of Conservation Voters. Environmental and progressive groups, such as the Sierra Club, MoveOn.org, the Natural Resources Defense Council and the National Wildlife Federation, have joined the League of Conservation Voters in asking their members to sign a petition demanding that these reporters, who have such great access to the presidential contenders, do a better job of quizzing them about climate change. So far, more than 200,000 people have signed the petition.

"There's all this horse-race stuff: Did Hillary cry today? Was Bill Clinton the first black president? The level of the discussion that we're seeing is just sad, given the stakes for the country and the planet," says Eban Goodstein, a professor of economics at Lewis & Clark College, who is director of Focus the Nation, a teach-in on global warming to take place at over 1,500 universities and schools this week.

Even Americans who aren't self-styled environmentalists or progressives want action from their leaders on global warming. An October 2007 Democracy Corps poll found that "doing nothing about dependence on foreign oil and global warming" was one of the top five reasons that both Democrats and independents think that the country is headed in the wrong direction. Notably, those independent voters, who will be so important to winning the White House in November, were even more likely than Democrats to say so, according to the poll.

"It's a key issue on Americans minds, it's a key issue in people around the world's minds, and it's a key issue in voters' minds," says Ilyse Hogue, a spokesperson for MoveOn.org. "Global warming is one of the defining issues of our times, and the policies of the next president will determine our economic and environmental future in how they address it. Voters need to hear what the candidates' visions and policies are."

The leading Democratic candidates share similar climate-change plans. Barack Obama, Hillary Clinton and John Edwards all support a cap-and-trade system to cut U.S. emissions, raising fuel-economy standards on U.S. cars and trucks and getting 25 percent of our electricity from renewable sources by 2025. Those similarities may be why global warming is getting so little air time on TV. "On the Dem side, the candidates agree on the fundamentals about global warming, and they all have ambitious plans, even if they differ on some details," says David Willett, the Sierra Club's national press secretary. "It's not an issue that divides or provides conflict between them, so it might not be seen as great TV."

On the Republican side, there's real variety in the candidates' plans -- or lack of -- to conquer the problem. John McCain, who has brought some of the only legislation aimed at fighting climate change to the Senate, and Mike Huckabee, both support a cap-and-trade system and raising fuel-economy standards, while Mitt Romney and Giuliani do not. Even so, says Willett, TV can't generate buzz by highlighting their differences. "The candidates' positions at this point, with the exception of Romney, are pretty well-known on the energy and global warming issues," he says. "So by asking them about it, it's not going to create news. It's not going to create a headline for tomorrow's paper."

Yet it's clear that many candidates want to make global warming an issue in the campaign and on the stump. "On the Democratic side, you can rarely go to a Democratic stump speech and not hear the words 'global warming,'" says Nayak. Obama has run TV ads in California in advance of the Super Tuesday primary that focus on climate change, while Clinton has run ads in California championing wind, solar and biofuels. At one campaign stop in New Hampshire, McCain got onstage, grabbed a sign from the audience that said, "Stop global warming," and announced that this would be one of his top priorities.

Invariably, though, interviewers fail to quiz the candidates about what they pledge to do to fight global warming, what it will cost to do so, and how they'll muster the bipartisan support to make any plans a reality. "They should be asked straightforward questions about how they're going to address the problem," says Dan Lashof, science director of NRDC's Climate Center, who spanked moderator Charles Gibson in his blog for an ill-worded, if rare, debate question on global warming. It would be fair to ask many of the Republican candidates simply: How serious a threat is global warming?

The importance of the next American president's stance on global warming may be hard to overstate. At the international climate talks in Bali in December, the United States was the only industrialized nation in the world that refused to commit to capping its greenhouse gas emissions. The odds are next to nil that rapidly developing nations such as China and India will do anything to curb their snowballing emissions if the United States, one of the world's top emitters, refuses to do so.

And scientists say that the window for taking meaningful action to lower greenhouse gas emissions is narrow. In late 2007, Rajendra Pachauri, the head of the United Nations' prestigious Intergovernmental Panel on Climate Change (IPCC) said: "If there's no action before 2012, that's too late. What we do in the next two to three years will determine our future. This is the defining moment." Will Russert, Blitzer and company measure up to that moment when the Republican and Democratic candidates square off this fall?