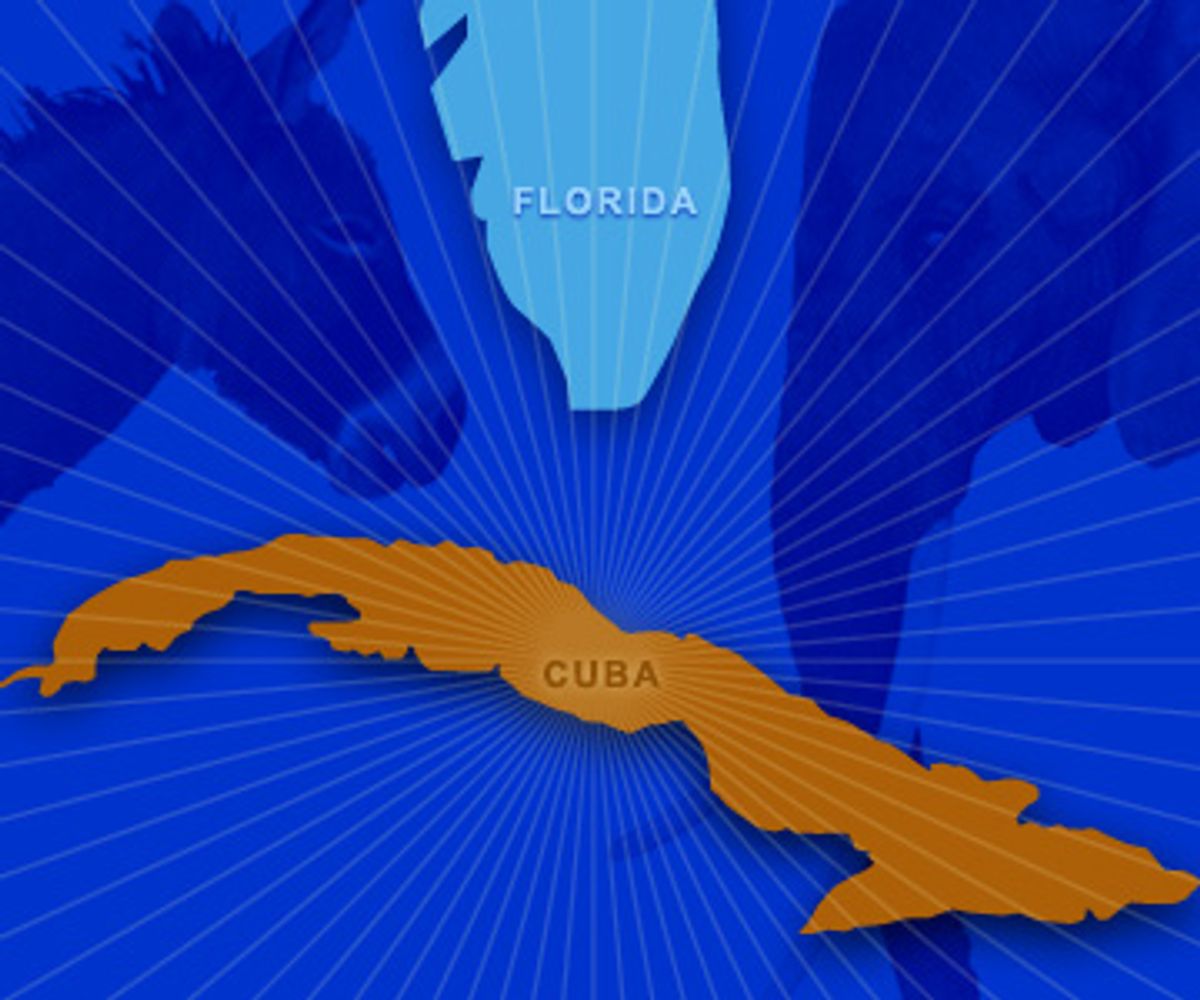 There are two things in politics as certain as red ties and taxes. The first is that presidential candidates will discover just how wonderful ethanol is shortly before they start campaigning in Iowa; the second is that when those same candidates touch down in Florida, they will instantly become heroic warriors in the fight against Fidel Castro. More than 1 million Cuban immigrants and Cuban-Americans live in South Florida, and they wield outsize political clout in this battleground state.

In this election cycle, presidential candidates from both parties have carefully calibrated their positions on Cuba. Democrats are not officially allowed to campaign in the state because of the tussle between the state and national parties, but nearly all the Republican contenders have been down to Miami's Calle Ocho for a cafecito in advance of Tuesday's primary. Former New York City Mayor Rudy Giuliani, who has staked his campaign on a win in Florida, has pushed especially hard for the support of the Cuban-American community. But the awards for pandering to anti-Castro hard-liners go to Hillary Clinton on the Democratic side and Mike Huckabee on the Republican, as the following checklist of the candidates' positions will show:

Barack Obama: In August of last year, Obama caused a stir among both Florida's Cuban voters and the foreign policy community when he published an Op-Ed in the Miami Herald that advocated changing the U.S. government's policy toward Cuba. In the piece, Obama stated his support for lifting travel restrictions to and from Cuba. But unlike John Edwards, who also advocates easing travel regulations, Obama endorses a change in the amount of money (currently limited to $300 per household each quarter) that Cuban-Americans can send to family members on the island. In the Op-Ed, Obama wrote, "The primary means we have of encouraging positive change in Cuba today is to help the Cuban people become less dependent on the Castro regime in fundamental ways." As one Obama supporter pointed out to journalist Kirk Nielsen, what's really interesting about Obama's position is that it is essentially the same as former President Bill Clinton's. Obama has voted to end TV Martí, a U.S. effort to undermine Castro with TV and radio broadcasts, on two occasions, putting him in opposition to Hillary Clinton.

John Edwards: Edwards has voiced his staunch support of the U.S. trade embargo on Cuba since his first presidential run in 2004. Last year, he joined Barack Obama's call to lift travel restrictions between the two countries, but that is the only change in the current U.S. policy toward Castro's regime that Edwards would seek as president. He has stated that once Castro dies, the United States should "evaluate his successor and then decide" whether to alter the embargo. The main difference between Edwards and Obama is that Edwards would not increase the amount of money Cuban-Americans could send to their relatives.

Hillary Clinton: Clinton supports a continuation of the United States' current policy toward Cuba. In a press release following Obama's Miami Herald Op-Ed, Clinton's campaign wrote, "Until it is clear what type of policies might come with a new government, we cannot talk about changes in the U.S. policies toward Cuba." Clinton averred that she would consider lifting travel restrictions only when Castro is out of power. As documented by Kirk Nielsen, Clinton has essentially endorsed the policy of the Cuban Liberty Council, a Republican-leaning advocacy group that supports the Bush administration's policy of keeping Cuba as isolated as possible, although there is virtually no chance that the CLC would endorse her. She also recently voted to perpetuate TV Martí.

John McCain: McCain is a longtime advocate of the embargo and would like to boost U.S. spending on the anti-Castro TV and Radio Martí programs. Recently, he has spent a great deal of time and energy in Florida attempting to remind voters of this commitment. In a 2007 interview, he vowed not to use military action to end Castro's reign. But he also stated that only upon Castro's death would he offer a "package of trade, of assistance, of economic development, of assistance in democratization." Recently, McCain's supporters have also been championing him to Florida's Cuban-American leaders. While speaking to a group of Hispanic leaders in Florida this month, Connecticut Sen. Joseph Lieberman, a McCain ally, assured all in attendance of McCain's revulsion toward Castro's regime. McCain's history of working against Castro includes a 1992 bill he cosponsored, titled the "Cuban Democracy Act," which sought "to promote a peaceful transition to democracy in Cuba through the application of appropriate pressures on the Cuban Government and support for the Cuban people. The bill prohibited U.S. corporations from trading with Cuba and prevented U.S. citizens from visiting the nation.

Mike Huckabee: Until recently, Huckabee was the only Republican candidate not named Ron Paul to support an end to the embargo. In 2002, while governor of Arkansas, Huckabee joined a bipartisan group of politicians who denounced the sanctions as harmful to U.S. business interests. However, campaigning in Florida last December, Huckabee suddenly changed his mind and pushed for an even more stringent position toward Cuba than the Bush administration's. Soon after, Marco Rubio, the Cuban-American speaker of the Florida state House, endorsed him. Huckabee cited his new expertise on international issues as the reason for his sudden change of heart, stating in an L.A. Times article, "Rather than seeing it as some huge change, I would call it, rather, the simple reality that I'm running for president of the United States, not for reelection as governor of Arkansas." He went on to say that while he was governor, he "really wasn't that aware of a lot of the issues that exist between Cuba and the United States." Fortunately, now he is.

Rudy Giuliani: When you stake your entire presidential campaign on a win in Florida, you can't afford to anger Cuban-Americans. Fortunately for Giuliani, who's been spending lots of time trying to woo Cuban-American votes, he has a solid record of anti-Castro rhetoric. A long-standing critic of Castro since his days as mayor of New York City, Giuliani has frequently repeated his support for the current U.S. policy toward Cuba. He has said, "Now is the time to increase the pressure on the Castro regime, not weaken it." Speaking last year in Florida, he criticized Castro and the American left, stating, "I find it particularly disturbing when American politicians and Hollywood people embrace Fidel Castro. I don't know if they understand they are embracing a murderer, a dictator, a man who has been horrible to gays and lesbians."

Ron Paul: You can't accuse Ron Paul of trying to ingratiate himself with Cuban Republicans. Paul is the only Republican presidential candidate who has publicly spoken out against the United States' sanctions against Cuba. In 2000, in an effort to assist Texas farmers, Paul voted to terminate the trade restrictions against Castro's government. At the time, he explained his position in a press release: "Trade embargoes simply benefit our export competitors, who stand ready to sell to markets closed to our farmers. It is time to end our 40-year failed policy and open up the Cuban marketplace to our products." During the Republican Univision debate on Dec. 9, 2007, Paul said he believed that "we're at a time where we even ought to talk to Cuba and trade and travel to Cuba."

Mitt Romney: Cuba is one of the few issues on which Romney's views have stayed consistent. Romney continues to support the embargo on Cuba. He started to campaign directly to Cuban voters earlier than most other candidates, issuing an ad last March affirming that he would meet with exiled Cuban leaders here in the United States. In a March 2007 interview on radio station WIOD, Romney gave a clear, simple statement about his position on Cuba-U.S. relations: "I am in favor of the embargo," he said. "I believe that any effort that would put more money in the hands of the Castro brothers is not a good idea." Romney's Web site outlines his position even more lucidly, with a paragraph that begins, "Continue To Isolate Castro With Economic And Diplomatic Sanctions." The passage goes on to say, "America will never back down to the Castro brothers. There will be no accommodation, no appeasement." Romney is an adamant proponent of the U.S.-backed TV and Radio Martí programs. He also has tried to appeal to Florida voters by asserting that he would allow all Cubans to immigrate to the United States. However, in 2007, he made an embarrassing mistake when discussing his position on Cuba. While speaking about Venezuelan President Hugo Chavez, Romney incorrectly attributed a Spanish saying to "free Cubans," when in fact, the saying is used most frequently by Castro. Romney later apologized for the error.