John McCain is back on top

With his victory in Florida, the Arizona Republican narrows the field and has Mitt Romney on the run. 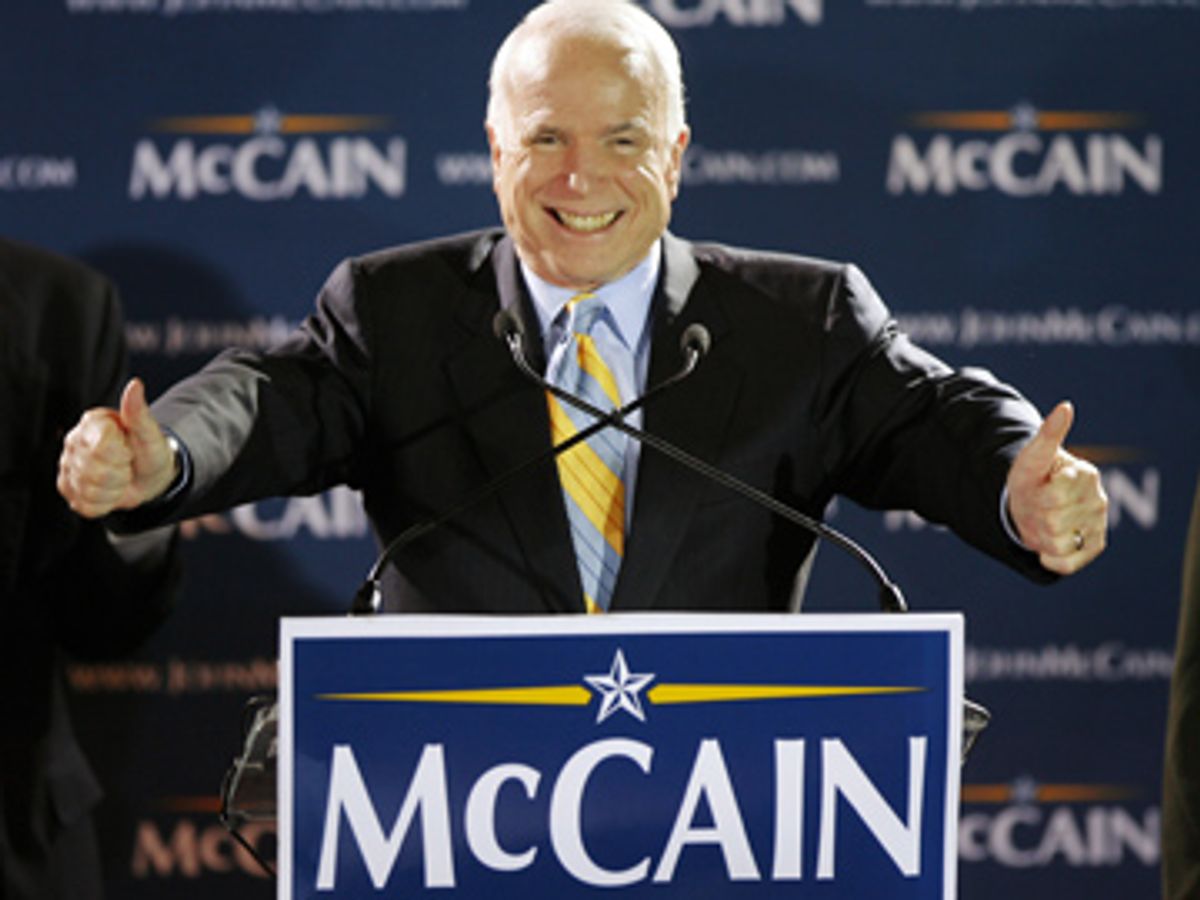 If you're trying to find some grand unified field theory that explains the 2008 Republican campaign for president, don't ask John McCain.

"The dynamics of this thing, I'd love to tell you I understand all of the dynamics here," he said Tuesday morning, as Florida voters headed to the polls. "I really don't ... Look, I'm just not smart enough to figure a lot of this out. My ego [says], Oh, we were wonderful, and we did it, and we had it all planned out, and we knew exactly what was going to happen."

And now, for the straight talk. "Well, that's bullshit."

Even if he doesn't know how it happened, McCain's win over Mitt Romney in Florida basically turned the clock back a year. It negated, in essence, most of 2007 -- when McCain entered the race as the front-runner, then collapsed; when Rudy Giuliani came in as the new front-runner, then bagged Iowa; when Fred Thompson showed up as the next Ronald Reagan but turned out mostly to share the 40th president's fondness for naps.

Now McCain is back on top. By the end of Tuesday night, Giuliani was all but out -- preparing, in fact, to endorse McCain -- and Mike Huckabee and Ron Paul were fading. That left Romney. McCain's Sunshine State victory effectively put the GOP contest's most bitter rivals into a one-on-one fight in a campaign that will now go national.

At the end of the Florida battle, which got as nasty as the Republican race has been yet, McCain sounded ready to bet on himself. "My friends, in one week we will have as close to a national primary as we have ever had in this country," he said Tuesday night. "I intend to win it and be the nominee of our party."

Florida was the first state where only Republicans were allowed to vote, and Romney had argued that would make it impossible for McCain to win here. In the last few days, Romney ran around Florida calling McCain a liberal, a charge that made McCain laugh and would probably make most liberals cry. He also hammered McCain's self-acknowledged deficient economics background -- playing up his "confident management consultant" side, which he'd brought out for Michigan's primary after the product launch for his "conservative crusader" side went badly in Iowa.

In a departure from the pattern in the race, Romney's attacks in Florida came after McCain launched one of his own on Saturday. McCain's team dug up a 9-month-old quote that the Arizona Republican said proved Romney wanted to set timetables for ending the war in Iraq. The quote was ambiguous at best; McCain appeared to be deliberately misreading it in order to help change the campaign focus -- jolted by the recent stock market turmoil -- from jobs back to jihad. National security has long been McCain's strongest turf, while the ex-CEO Romney does better on the economy. But not much of that back and forth made it into the local news after Saturday night, anyway, when Gov. Charlie Crist endorsed McCain and shifted momentum his way.

Neither campaign made strong predictions about who was going to win. The race was too close to call in tracking polls going into Tuesday, and stayed that way in exit polls all afternoon. In fact McCain, whose campaign had been nearly bankrupt before he won in New Hampshire and South Carolina, claimed the odds were against him, given Romney's deeper pockets and more lavish spending. "Governor Romney was running television ads in this state for the last two months," he said on his campaign bus after a swing by Crist's St. Petersburg precinct Tuesday morning. "He's spent millions of dollars. We've come in, in the last week with our television ads."

But this might mark the last time McCain can plead poverty. With each win, his entourage has steadily upgraded its hotels; the Nashua Crowne Plaza in New Hampshire gave way to a boutique hotel in Charleston's historic downtown and then a Westin in Tampa the night before the election here. In California for a debate Wednesday, McCain will be staying in Beverly Hills. "The money is coming in very strong," he said Tuesday. His campaign had to borrow $3.5 million in the fall, but it raised twice that much in January alone.

McCain's own advisors say cash may not matter as much now, though he's cramming fundraising events in as often as he can over the next week. In many of the states that vote Feb. 5, Romney hasn't run commercials for months, because he's been focusing his millions on the handful of early voting states, several of which he lost anyway. "Even if he spends more on TV ads, it's not six months of TV ads, which means, by definition, that there's a diminishing value of his dollars because the nature of the race changes," said McCain strategist Steve Schmidt.

That may be one advantage in how the race is now narrowing. But there could be a flip side to that dynamic, too: The scores of conservative activists who never much liked McCain now have a sole alternative to unite behind. Sure, some of them may not love Romney -- but if it's Romney or McCain, there's little question where they'll turn. One group, Citizens United Political Victory Fund, is about to launch TV commercials comparing McCain to Hillary Clinton. Rush Limbaugh and Sean Hannity have been snarling about McCain for weeks now on talk radio.

Romney's concession speech Tuesday took an odd turn back to the nostalgia he ran on in Michigan: "I remember, when I was growing up, I always knew that America was the greatest nation on earth," he said in a long windup. But he's also sticking with a message he used in Florida, according to his staff. "Tonight is a ticket to a two-way race between the outsider who wants to change Washington and the insider who has been of Washington for 25 years," his spokesman, Kevin Madden, told Salon.

Meanwhile, the campaign that McCain revived with town halls and dogged retail politicking in New Hampshire now gets ready for a crazy zigzag all over the U.S. map. McCain may not understand it, but that doesn't mean he doesn't like it. "Tonight, my friends, we celebrate," he said. "Tomorrow it's back to work. We have a ways to go, but we are getting close, and for that you all have my profound thanks."