She trounced Obama by 17 points -- but in an outlaw primary whose delegates won't count. Or will they? It all depends on Feb. 5 -- and Democratic Party rules. 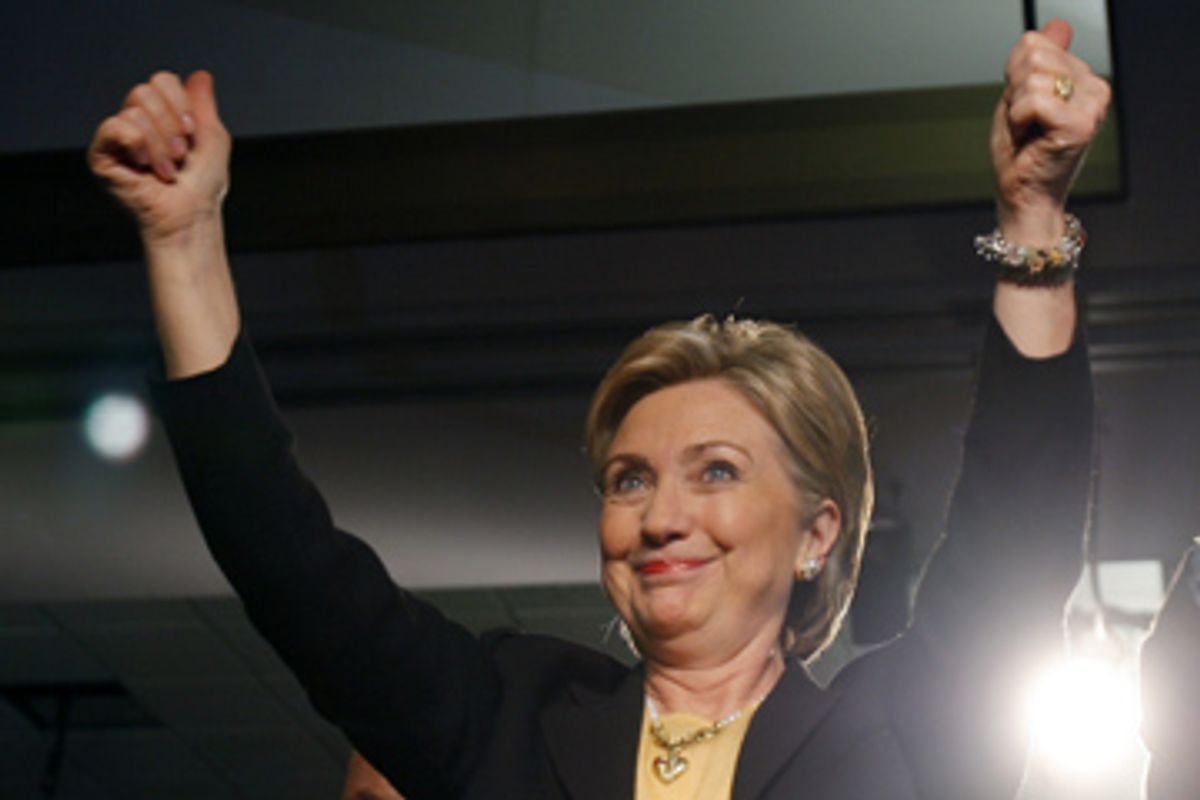 Florida Democrats wrote two conflicting story lines in Tuesday's primary. In Narrative I, a sunshiny Hillary Clinton needed only 72 hours to recover from her death-bed scene in the South Carolina primary, defeating Barack Obama by 17 percentage points in Florida. In Narrative II, a desperate Clinton, trying to clamber out of political quicksand, loudly proclaimed victory in a meaningless Florida beauty contest that will not earn her any delegates.

For those who adore semantic riddles, for those whose idea of fun is staging dramatic readings of the Democratic Party rules, we face the curious question, When is a primary not a primary? The answer: When the Democratic National Committee refuses to recognize the result.

The returns from Florida were unequivocal: Clinton 50 percent, Obama 33 percent, and John Edwards 14 percent, with 98 percent of the precincts reporting. According to the exit polls, Clinton won virtually every demographic group (women, men, whites, Hispanics, voters at all income and education levels) with the conspicuous exception of African-Americans, who -- in contrast to South Carolina -- made up only 19 percent of the Democratic electorate. At a victory rally in Florida (the first time she had campaigned in the state), Clinton declared, "I am thrilled to have had this vote of confidence that you have given me today."

So what is the matter with Florida? Why has the Democratic Party turned this contest in the ultimate swing state, with a turnout of 1.7 million voters, into an outlaw primary? There is an answer -- an important answer that may be angrily debated all the way to the Denver convention -- but it requires a crash course in (put on your thinking caps) Democratic Party rules.

The DNC, as it does every presidential cycle, voted in mid-2006 to give special permission to certain small states to hold early caucuses and primaries. This time around the winning states were the traditional Iowa and New Hampshire, plus South Carolina (first moved to the front row in 2004) and Nevada (the new state on the early calendar). The DNC's rationale was compelling: Small states require personal campaigning rather than airport rallies, and they prevent politics from totally degenerating into a contest of who has the most money for TV ads. With the exception of the kerfuffle over caucus locations in Nevada, the early states did their job well in giving a fair look to the Democratic field before narrowing it down to Clinton, Obama and Edwards.

No other state, under the DNC's regulations, could hold a primary or caucus before Feb. 5. But last year, first Florida and then Michigan defiantly scheduled their 2008 primaries in January. This queue jumping not only undermined the special status of the four small states, but it also meant unfairly squeezing ahead of the throng of 22 states that had slated primaries and caucuses for Feb. 5.

The abuse was so flagrant that not only did the DNC play tough guy (stripping Michigan and Florida of all their convention delegates), but the party chairs in the four small front-of-the-pack states pressured the candidates into signing a pledge not to campaign in the two outlaw primaries. Obama and Edwards, in fact, even took their names off the Jan. 15 Michigan primary ballot in which Clinton beat "uncommitted" by a 55-to-40 percent margin.

With Woozy Tuesday just a week away, the press and the public might have treated the Florida results as a curiosity -- a set of statistics that might offer a clue or two about voter sentiments in the Feb. 5 primaries. True, unlike Michigan, there were small flurries of campaign activity on both sides of the Obama-Clinton equation. The Obama campaign ran TV ads in Florida as part of a national cable buy but did not advertise on local stations. Clinton benefited from the active, but nominally independent, campaign efforts by the public employee union AFSCME.

Only when the dimensions of her South Carolina setback were clear did Clinton begin portraying the Florida vote as ... well ... the 2000 Florida vote. The former first lady suddenly had a new cause -- justice for Florida. She pledged on primary night to do everything in her power to guarantee that "Florida's Democratic delegates [are] seated."

As Clinton and Obama brace for what may be the Democrats' first protracted count-every-delegate battle since 1984, the real question is not bragging rights from Florida. Rather it is: What will happen to Florida's and Michigan's convention delegates? Right now, the DNC excludes both states entirely from the calculation that 2,025 delegate votes are necessary for victory at the convention, out of 4,049 cast.

Mark Brewer, the Michigan party chairman, radiates optimism that his state will get its delegates back. "In the past when such penalties have been imposed on states that have gone early, they have always been lifted," he said in an interview. "But beyond that, the political reality is that Michigan is a targeted battleground state ... It would be political suicide for the Democratic nominee to refuse to seat us and hope to win Michigan in November."

All this is true if -- and it is a big if -- the Democratic race is settled before the convention. If Obama is still scrapping for a majority in August, his supporters are unlikely to automatically support seating two delegations that will give the bulk of their votes to Clinton. Rather, the dispute over Michigan and Florida would go first to the Convention Credentials Committee and then -- if it came to a final showdown -- the floor of the convention itself in a dramatic test vote that could decide the nomination. (There is precedent for this: George McGovern nailed down his 1972 victory after a floor fight over seating the South Carolina delegation. And in 1980, Ted Kennedy's last-gasp effort to defeat Jimmy Carter pivoted around a different type of procedural vote.)

Of course, we are getting far ahead of the story as we toy with that beguiling fantasy of a Democratic Convention that actually decided something instead of being as carefully choreographed as a Disney musical on Broadway. In the short term, under Democratic Party rules, Michigan and Florida could theoretically petition for a do-over, asking to hold a party-sanctioned caucus or primary between Feb. 5 and June 10. But Brewer insists that the DNC has not asked Michigan to hold another delegate contest -- and he added, "If they did, we would refuse."

Yes, there is something ludicrous in the notion that the identity of the Democratic nominee could get tangled up in a dispute over the scheduling of the Florida and Michigan primaries. But there is also something ridiculous in the idea that the Clinton and Obama campaigns are waging a press-release battle over a primary that did not count. The symbolic jousting over the cosmic meaning of the Florida returns will undoubtedly fade in a day or two, only to return with a vengeance if somehow the delegate battle goes all the way to the convention. For the moment, though, it is silly to fixate on the Florida beauty contest when there will be 1,681 real delegates at stake next Tuesday.