He sought to return the Democratic Party to its blue-collar roots. But a historic race ended his hopes for the presidency. 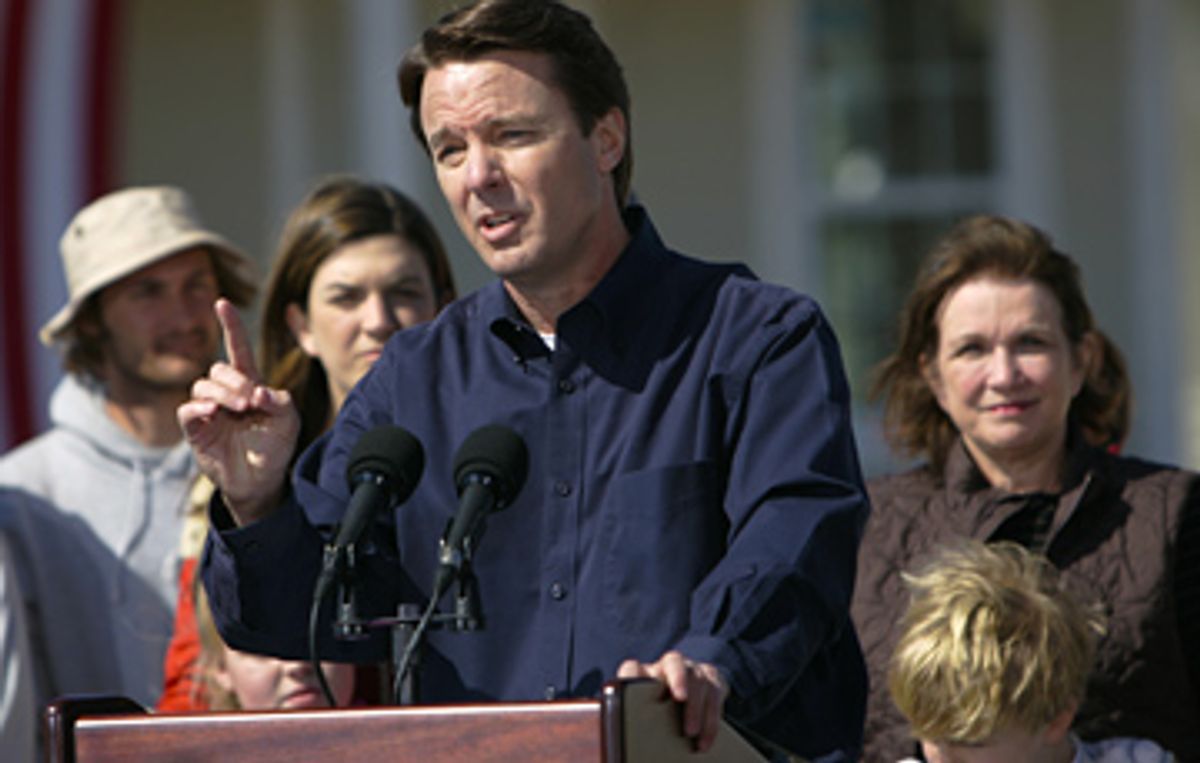 John Edwards declared his candidacy for president in the Katrina-ravaged Lower 9th Ward of New Orleans on Dec. 28, 2006. But, in hindsight, Edwards' hopes of winning the Democratic nomination probably died three months earlier, in mid-September 2006, when a non-candidate named Barack Obama electrified Iowa Democrats at Tom Harkin's annual steak fry, the signature political event in the must-win first caucus state. Edwards, who found himself unable to compete for air time and votes with two history-book candidates, bowed to the inevitable Wednesday afternoon back where it all began in the still ramshackle Lower 9th Ward.

Most losing presidential campaigns leave behind little more than bumper stickers, brochures and bruised egos. But Edwards' second run for the White House was different, because he had substituted boldness for blandness -- and ran as an unabashed heart-on-his-sleeve, union-windbreaker-on-his-back old-fashioned populist. As the most liberal (whoops, progressive) major Democratic presidential contender in more than two decades, Edwards walked the picket lines and spoke passionately of poverty and injustice.

What Edwards offered -- through all the debilitating and often irrelevant flaps over haircuts, hedge funds and humongous houses -- was an opportunity to return the Democratic Party to its blue-collar roots. As he put it with characteristic fervor Wednesday, "I don't know when our party began to turn away from the cause of working people, from the fathers who were working three jobs literally just to pay the rent, mothers sending their kids to bed wrapped up in their clothes and in coats because they couldn't afford to pay for heat."

Despite unverified rumors (vehemently denied by those close to Edwards) that promises of future Cabinet posts like attorney general had been floated, Edwards requested only one thing when he telephoned Obama and Hillary Clinton Tuesday night to confide that he was considering withdrawing before the Feb. 5 primaries. What Edwards asked for and received was a commitment from his erstwhile rivals that they make the eradication of poverty a central theme in their campaigns.

There was also another motif to the campaign that had nothing to do with poverty or policy. With sometimes raw and wrenching emotion, the Edwards crusade was also about living with cancer -- about embracing the future and facing one's own mortality at the same time. Elizabeth Edwards' candor and courage in confronting a diagnosis of incurable breast cancer may have been one of those events in public life that transform attitudes, much as Betty Ford's mastectomy in 1974 brought the disease beyond whispered voices in hospital corridors.

If there is a verdict on the Edwards campaign, it is that the candidate and his advisors played a weak hand well. Short of money and with no natural fundraising base other than trial lawyers, Edwards knew from the beginning that he had to win Iowa, a state where he had finished a surprisingly close second to John Kerry in the 2004 caucuses. Only victory would have given Edwards the press coverage and the TV time that he craved to compete with Clinton and Obama.

The 2004 vice presidential nominee was the perfect foil for Clinton in Iowa -- and some Edwards advisors believe, even now, that he would have beaten her nationally in a two-candidate race. But Obama's unexpected candidacy roiled all the careful Edwards calculations. Suddenly there were two White House candidates running on the change ticket (at times Clinton tried to make it three) and two outsiders railing against lobbyists. It did not matter that Edwards was first out of the box with a healthcare plan that mandated universal coverage, a bold position that Clinton (but not Obama) later matched. For no matter what Edwards did, he was constantly shoved out of the limelight. Obama described it accurately in the South Carolina debate when he talked about "a race where you've got an African-American and a woman ... and John."

Even after barely beating Clinton for second in the Iowa caucuses and then coming in a weak third everywhere else, Edwards did not have to abandon the campaign trail. Thanks to a late gusher of Internet fundraising, the money was holding up. His vote totals in South Carolina (18 percent) and Florida (14 percent) suggested that he could continue in many states to score above the threshold (15 percent) for accumulating delegates. His top campaign advisors even held a conference call with reporters Tuesday afternoon to lay out their campaign plans for the Feb. 5 states. And Edwards himself spoke to a raucous campaign rally in St. Paul, Minn., Tuesday night.

But by that point, the candidate was already facing the inevitable. He flew home to North Carolina on Sunday night to talk with Elizabeth -- his closest and often only confidant -- who had been off the campaign trail with a bad cold. (She was, however, in New Orleans on Wednesday). As a close friend of Elizabeth's put it, "She had hit a wall with the campaign, and it had nothing to do with her health. She just couldn't see a path to the nomination."

John Moylan -- a South Carolina lawyer who headed the campaign in that state's primary and traveled with Edwards constantly in recent weeks -- said, "I don't know if John himself knew that the decision was coming right after South Carolina. It came upon him gradually." And top strategist Joe Trippi explained the timing of the decision like this: "It became increasingly clear on Sunday and Monday that we were totally blocked out of the news story. John Edwards didn't want to play politics. He didn't want to stay in the race to be a kingmaker or a spoiler. There was just not a clear shot at the nomination."

For all the glib TV talk about a forthcoming Obama endorsement, there is a sense in the Edwards camp that any decision on where he will throw his support and direct his 50 delegates will be made deliberately -- and there is no guarantee that he will pick a candidate to bless. As Moylan said, "I think he will do nothing for the immediate future and just let it all settle in."

It is difficult in politics, as in life, to watch a dream die. John and Elizabeth Edwards have banked the last six years and maybe longer on seeing him in the White House. But there is also honor in having run a high-minded race for president on long-neglected Democratic issues, even if you fail. By that standard, Edwards is a success story even as he leaves the political stage to Clinton and Obama.