And then there were two

In a highly anticipated showdown, Clinton and Obama duked it out, sort of, in a fight for the high road. 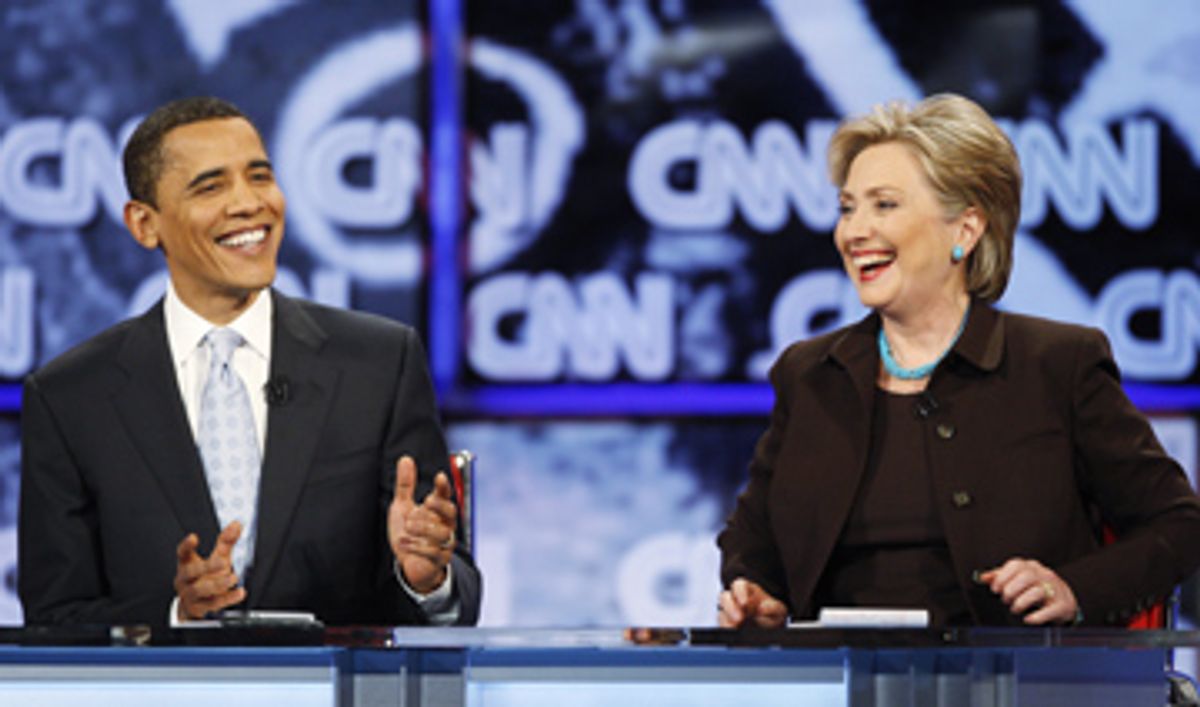 In theory, at least, the stakes could not have been higher Thursday night for Barack Obama and Hillary Clinton. After 17 previous multi-candidate debates, this time there were no others onstage to pile on, rush to anyone's defense or otherwise interfere. Democratic voters were watching intently, whether tuned to televisions coast to coast or sitting among prominent Hollywood liberals sprinkled throughout the Kodak Theatre in Los Angeles. They were in search of last-minute reasons to choose between the two candidates remaining in one of the most riveting Democratic primary contests in recent memory.

Just five days before more than 20 states and territories will select 1,688 pledged delegates -- the biggest single-day Democratic primary in history -- the two heavyweights finally went head-to-head. And yet, with so much on the line, neither appeared willing to risk making a serious attack on the other. It was a policy-substantive discussion, to be sure. But for those who prefer the blood-sport elements of a political race, this one was mostly a snoozer.

Policy disagreements, insofar as there were major differences, were uniformly polite. Both candidates doled out compliments to the other, with slights noticeably absent. The ubiquitous and rather divisive figure of the past couple of weeks, former President Bill Clinton, was not referenced until the 71st minute, and wasn't mentioned by name until very late in the debate, in response to a question submitted online by a voter. The civility of the debate was striking, especially given the fact that, aside from time limits on opening statements, CNN anchor Wolf Blitzer imposed no rules. It was as if both sides were somehow quietly fighting for the high road.

After honoring the recently departed John Edwards in a transparent bid to attract his former supporters, both candidates immediately set about reinforcing each of their own familiar claims to the nomination and the presidency.

"How do we take the country in a new direction?" Obama, in a navy suit with lavender tie, asked in his opening remarks. "I don't think the choice is between black and white, or it's about gender or religion, or about young or old. What's at stake is whether we are looking backwards or forward, it's about the past or the future."

Clinton, who wore a brown pantsuit with an aquamarine necklace, began by pressing her experience-and-readiness credentials. "When the celebrations [of Inauguration Day] are over, that president will walk into the Oval Office and a stack of problems will be waiting," Clinton stated. "It is imperative that we have a president, starting on Day One, who can begin to solve our problems and tackle these challenges."

Something of a love-fest ensued. "I was friends with Hillary Clinton before this campaign and I will be friends with her after this campaign is over," Obama said early on. "We're running a competitive race because we both love this country." For her part, Clinton asserted that the Republican debate the previous night at the nearby Ronald Reagan Presidential Library was "more of the same. Neither of us -- just by looking at us -- we are not more of the same." At times, both candidates turned attacks on members of the opposing party to deflect attention from any potential animosity between the two of them.

Both faced tricky questions, but Clinton arguably got the rawer deal. She was pressed on her October 2002 Iraq war resolution, as well as the role her husband has played in her campaign and could play in her administration. She was asked whether her election would perpetuate a Bush-Clinton dynastic era. "Well, as I have often said, I regret deeply that there is a Bush in the White House at this time," she replied. "I want to be judged on my own merits, I don't want to be advantaged or disadvantaged" by my husband. She then hit her biggest applause line, concluding the point by reminding the audience, "It did take a Clinton to clean up after the first Bush, and it might take another to clean up after the second Bush."

Obama was asked how he would respond to charges that he's just another "tax- and-spend liberal." He also found himself on the horns of a demographically uncomfortable, voter-submitted question: What would he do to reverse the problem that illegal immigrants, who are largely Hispanic, pose to the economic livelihood of working-class African-Americans? It fit into his coalition-building campaign theme, though, and he responded confidently. "To suggest that the problem of inner-city unemployment, for example, is attributable to immigrants is a case of scapegoating that I do not believe in, and I do not subscribe to that," said Obama, skirting the issue of possible black-Latino tensions. "The economic problems that African-Americans, whites and Latinos are experiencing are all rooted in the fact that we have an economy out of balance."

Healthcare issues were a major focus, as the two candidates described and defended their respective health insurance proposals. Both emphasized that the two plans were strikingly similar, yet each emphasized a few critical areas of difference -- most notably whether adults should be mandated to buy coverage and how to provide sufficient monies to cap or lower insurance premiums.

Without specific prompting, Obama twice managed to invoke the name of Republican front-runner John McCain -- a smart attempt to project the image of himself as McCain's eventual opponent in November. Replying to the tax-and-spend liberal charge, he earned his biggest applause by mocking McCain's shifting position on the Bush tax cuts, which the Arizona senator initially opposed as irresponsible during wartime, but has since come around to defend. "Somewhere along the line the Straight Talk Express lost some wheels," sniffed Obama. "Now he's in favor of extending some of the tax cuts for Americans who don't need them and never asked for them."

Blitzer marred the evening by twice attempting to characterize a comment by Obama as a sideswipe at Clinton. The second time, Clinton herself stopped Blitzer in his tracks. "Really?" she interjected. "I think we're having a good time." Whichever candidate won the debate, Blitzer came off as the loser with his indiscreet attempts to prompt the candidates to attack each other. He was roundly booed for framing a follow-up question to Clinton about her October 2002 Iraq war resolution vote as evidence of her being "naive" for trusting President Bush. "Good try, Wolf," she retorted sharply. "Good try."

But overall, comity carried the night, as the camera repeatedly panned out over a star-studded audience. The veritable constellation of liberal Hollywood stars in attendance included Jason Alexander, America Ferrara, Topher Grace, Diane Keaton, Rob Reiner, Steven Spielberg and Alfre Woodard. They witnessed an occasionally spirited, but mostly thoughtful and respectful exchange between two smart and credible candidates. It wasn't the most exciting event imaginable, but one that American politics in recent years has in some ways sorely lacked.