Blowback from the GOP's holy war

The 2008 Republican race has left a bitter legacy of sloganeering against Muslims. It may well haunt the party this November. 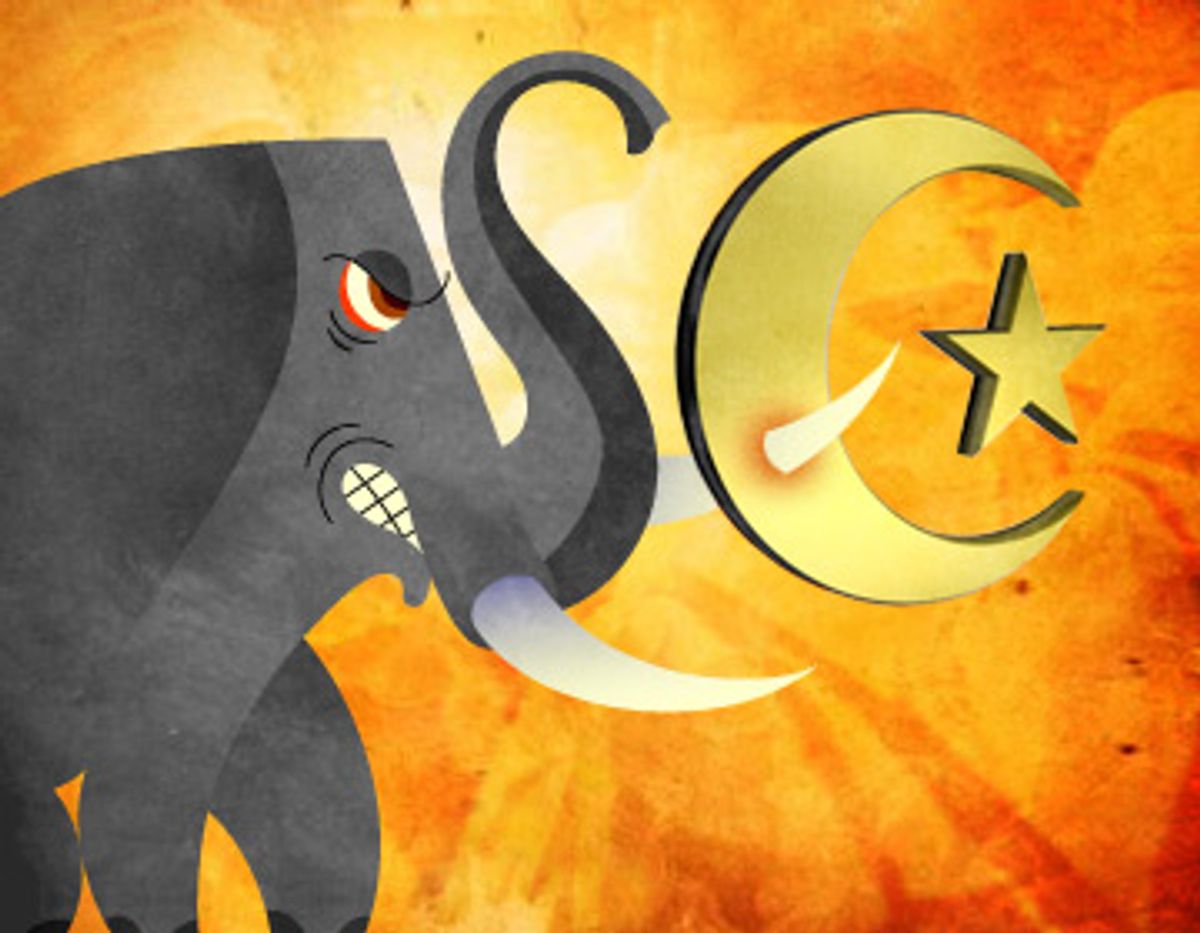 For much of January, one might have thought that the Republican candidates for president were already competing against a single opponent. Not one called Hillary or Barack, but with a moniker even more chilling in the eyes of hard-line Republicans: Islamic fascism.

The American public, worried about mortgages, recession and a seemingly interminable war in Iraq, was unimpressed -- those who fear-mongered the most about Muslim terrorists have faltered at the polls. Even the remaining front-runners, John McCain and Mitt Romney, have said bigoted things about Muslims and their religion. But Islamophobia as a campaign strategy has failed, and it may well come back to haunt the Republicans in the general election.

Back when the GOP presidential field was still flush with tough-talking right-wingers, no one was more outrageous in targeting Muslims than Rep. Tom Tancredo of Colorado, who suggested that Muslim terrorists inside America were plotting the imminent detonation of an atomic bomb on U.S. soil. How to prevent this Tom Clancy scenario? "If it is up to me, we are going to explain that an attack on this homeland of that nature would be followed by an attack on the holy sites in Mecca and Medina," Tancredo declared. "Because that's the only thing I can think of that might deter somebody from doing what they otherwise might do."

That sort of wild-eyed bigotry only fuels the cycle of mistrust and vengeance. One can only imagine how much more difficulty Tancredo generated for U.S. diplomats attempting to explain to America's Muslim allies why a presidential candidate was talking about nuking Islam's holiest cities, the larger with a population nearly that of Houston.

But the failure of Islamophobia as a campaign strategy is no better illustrated than by the spectacular flame-out of Rudy Giuliani. Throughout his campaign (deep-sixed after his dismal showing in Tuesday's Florida primary), the former New York mayor evoked the Sept. 11 attacks at an absurd rate. Giuliani and his advisors appeared to revel in demonizing Muslims. They also reveled in their own ignorance -- never learning the difference between "Islamic" and "Muslim."

"Islamic" has to do with the religion founded by the prophet Mohammed. We speak of Islamic ethics or Islamic art, as things that derive from the religion. "Muslim," on the contrary, describes the believer. It would be perfectly all right to talk about Muslim terrorists, but calling them Islamic terrorists or Islamic fascists implies that the religion of Islam is somehow essentially connected to those extremist movements.

But people are not "Islamic," they are Muslim. And one most certainly does insult Muslims by tying their religion to movements such as terrorism or fascism. Muslims perceive a double standard in this regard: Timothy McVeigh and Terry Nichols would never be called "Christian terrorists" even though they were in close contact with the Christian Identity Movement. No one would speak of Christofascism or Judeofascism as the Republican candidates speak of Islamofascism. Muslims point out that persons of Christian heritage invented fascism, not Muslims, and deny that Muslim movements have any link to the mass politics of the 1930s in Europe.

Giuliani's pledge to take the United States on an offensive against Islamic fascism, which he also said would be a long-term battle, failed to excite the imagination of voters. It may well have alarmed them in a way different from what Giuliani intended: If, by Giuliani's logic, the United States is only on the "defensive" now, with wars in Afghanistan and Iraq, what would being on the offensive look like? Would Giuliani have started four wars? Interestingly, Giuliani did especially poorly in Florida among retired and active-duty military personnel.

Giuliani was also hurt when the co-chair of his veterans' campaign in New Hampshire, John Deady praised Giuliani for being able to stop "the rise of the Muslims," an effort necessary to continue, he said, until "we defeat them or chase them back to their caves, or, in other words, get rid of them." When asked if he was really condemning all members of the religion, Deady replied, "I don't subscribe to the principle that there are good Muslims and bad Muslims. They're all Muslims." Deady was forced to resign after a video of his remarks was put on the web by the Guardian. Other Giuliani advisors have had some bigoted things to say about Muslims as well. Rep. Peter King of New York complained that "unfortunately we have too many mosques in this country." Daniel Pipes, a professional Islamophobe advising Giuliani, once said it would be dangerous to let American Muslims vote.

Meanwhile, Arkansas Gov. Mike Huckabee, who has done well among evangelicals but has had difficulty attracting votes from other segments of the Republican Party, had a revealing response to the assassination of Pakistani politician Benazir Bhutto. "I am making the observation that we have more Pakistani illegals coming across our border than all other nationalities except those immediately south of the border," he said. He added, "And in light of what is happening in Pakistan it ought to give us pause as to why are so many illegals coming across these borders." In fact, there are almost no Pakistani illegal aliens to speak of in the United States. Only 13 percent of the estimated 12 million persons in the United States illegally are estimated to be Asian, but almost all of them are East Asian. Pakistani and Indian immigrants, moreover, are among the wealthiest immigrants in the country.

Current GOP front-runner John McCain has been prone to hyperbole and has let some bigoted statements escape his lips as well. He has said that the threat from Islamic extremism is greater than the one presented by the Soviet Union. Recently, McCain proclaimed, "I'm not interested in trading with al-Qaida. All they want to trade is burqas... " The senator seemed to be relating the Muslim custom of veiling to terrorism. The Detroit Free Press, whose city has one of the largest Muslim populations, reported on Jan. 12 that McCain's remarks were hurtful to American Muslims. "Local Muslims say that criticizing al-Qaida is legitimate, but wonder why he would make a snide remark about a dress? The remark was especially bothersome, some said, considering that McCain's adopted daughter, Bridget McCain, is from one of the biggest Muslim countries, Bangladesh." One would think that raising a daughter from the Muslim world in the United States today would be difficult enough, even without the adoptive father's denigrating the customs of the women from that culture.

On another occasion, asked whether a Muslim candidate for president would be acceptable, McCain replied, "I just have to say in all candor that since this nation was founded primarily on Christian principles ... personally, I prefer someone who I know who has a solid grounding in my faith. But that doesn't mean that I'm sure that someone who is Muslim would not make a good president. I don't say that we would rule out under any circumstances someone of a different faith. I just would -- I just feel that that's an important part of our qualifications to lead."

But according to Article VI of the U.S. Constitution, "no religious Test shall ever be required as a Qualification to any Office or public Trust under the United States." Secularists and Jews joined American Muslims in condemning McCain's assertion that the United States was founded on Christian principles, and that Christian faith could be a key determinate for taking the Oval Office.

McCain's misconceptions about Muslims and perceived hostility toward them predates his 2008 presidential campaign. In 2005, he said on "The Charlie Rose Show" that a Muslim had killed the Indian political and spiritual figure Mahatma Gandhi. In fact, the assassin belonged to a radical Hindu organization, the RSS.

Former Massachusetts Gov. Mitt Romney has, like his peers, regularly invoked the dangers of "Islamic fascism." He allegedly told one Muslim-American he would not put a Muslim in his Cabinet, since there were not enough Muslim-Americans to justify it. (Romney later denied the charge).

Why might all this rhetoric targeting Muslims be unwise? For one thing, allowing the Christian conservative base to set an agenda that demonizes Muslims contains the danger of turning off more moderate segments of the GOP and American voters at large. McCain's comment on the importance of a president's being Christian appeared to have backfired on him in precisely that way.

Moreover, Muslim-Americans and Arab-Americans are swing voters in key states such as Michigan, Ohio, Pennsylvania, New Jersey and Florida. While they tended to vote for George W. Bush in 2000, by 2004 these groups overwhelmingly supported John Kerry, and the heavy-handed and bigoted rhetoric of the Republican candidates may drive them away from the GOP altogether.

The candidates who played to fears of "Islamic fascism" the most -- Tancredo, Huckabee and Giuliani -- failed to light any fire under partisans in the party, and they have now faded from the scene. But the campaign has already left behind a bitter legacy of sloganeering against a single religious and ethnic community. The Republicans have repeatedly asserted that Islam has been perverted by radicals; their rhetoric effectively reduced American Muslims to second-class citizens and branded them as suspicious. Perhaps most worrisome of all: If any of the remaining candidates does win the presidency, he is going to have to cultivate close relations with Middle Eastern regimes to even begin resolving the mess in that region. And that president will have to do so saddled from the start with a legacy of denigrating Islam and Muslims.