Romney, whose religion may have hurt his chances at the Republican nomination, discreetly mourns his church's president and "prophet" at a Utah funeral as his own campaign's vital signs ebb. 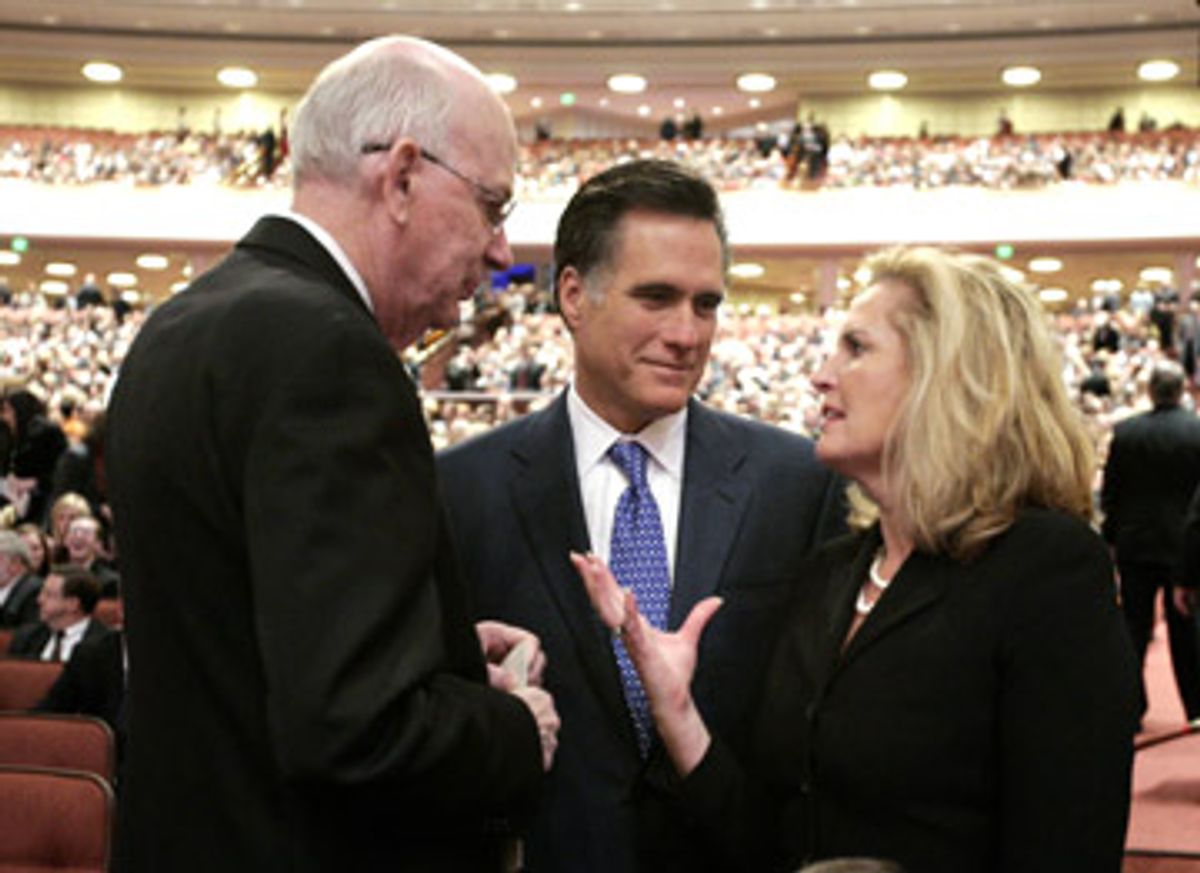 There's never a good time for a funeral, but the one Mitt Romney went to Saturday may have been particularly inopportune. In the closing stage of a campaign where he has tried his hardest to manage scrutiny of his faith, Mitt Romney, candidate for president, pulled himself off the campaign trail for the morning and became Mitt Romney, grieving Mormon.

As soon as Romney learned Gordon Hinckley -- the 15th president of the Church of Jesus Christ of Latter-day Saints -- had died Sunday night, he had announced he would detour to Utah for the funeral. "He's a man I respect a great deal, and I want to pay my respects to his family and acknowledge the importance of his life in my own life," Romney told reporters Friday afternoon.

But the way Romney's campaign handled his visit betrayed a more complicated set of calculations. Attending the funeral was, in some ways, an even more public declaration of his faith than Romney's heavily hyped speech on religion in December; there was no on-message way for him to frame the service for a man Mormons called, in addition to president, "prophet, seer and revelator." Barely 170 years after the religion burst into existence, it still apparently makes some mainstream Christians squeamish enough that only Mormon bigwigs in national politics (Sen. Harry Reid of Nevada; Health and Human Services Secretary Mike Leavitt, attending on behalf of President Bush; Utah Sens. Orrin Hatch and Robert Bennett) came to the service. Compare that to the scene three years ago, when Catholic and Protestant elected officials alike made a big show of flocking to Rome to see Pope John Paul II buried, and you can understand how the visit posed a dilemma for Romney.

His campaign didn't exactly go out of its way to play up his trip this week. Media advisories announcing his schedule for the weekend covered a campaign stop in Denver Friday afternoon and a swing through Minneapolis Saturday night, but only reporters traveling with the campaign got the details of the funeral. He came and went through an underground garage, leaving his press entourage behind, and stayed at his son Josh's house near Salt Lake City Friday night. The church-owned Deseret Morning News led Saturday's paper with Romney's visit to the state -- giving it more attention than his own campaign did.

Aides said that was a sign of respect, not concern. "I don't think this funeral is about Governor Romney," his spokesman, Kevin Madden, said. But since before he officially started running for president, how to explain his faith in public has caused Romney some angst. He used to joke about it, saying, "I believe marriage should be between a man and a woman... and a woman... and a woman." (The line hit close to home; his great-grandfather had five wives.) But once the campaign turned serious, aides sometimes got touchy about LDS matters. Though much of Romney's early fundraising tapped Mormon networks, his advisors treated questions about how the church helped him as an indication of bias, as if they'd forgotten similar stories about Joe Lieberman raising money from Jews in his own 2004 campaign.

Saturday's service, though, didn't have much in it to cause political consultants to worry about how voters would react. Some of the basic tenets of Mormon belief and the church's turbulent history were, of course, inescapable. "We are so grateful for the restoration of the Gospel in these last days, for the marvelous appearance to the Prophet Joseph Smith of You and Your only begotten son," Hinckley's son, Clark B. Hinckley, said in his opening prayer. Hinckley's daughter, Virginia Pearce, told how the late president's grandfather Ira joined the earliest Mormons as a teenager in Nauvoo, Ill., and fled with them to Utah after a mob killed Smith.

But for the most part, the funeral skipped over any serious Mormon theology. Hinckley was eulogized for his work expanding the church, building up LDS educational facilities and steering the massive bureaucracy whose office building towers over the Salt Lake Temple. The service blended mellow Tabernacle Choir songs with dry speeches sprinkled with soft humor. It was almost devoid of any actual religious ritual; there was none of the incense, chanting and elaborate pomp that marked the pope's funeral, for instance. It may be a mark of how new and how truly American Mormonism is that it held a funeral for its spiritual leader in a giant conference center distinguishable from a corporate auditorium mostly by the enormous pipe organ behind the podium.

While Romney has sometimes glossed over the differences between his beliefs and mainstream Christian theology, the LDS church doesn't hide the elements of its worldview that might seem weird to an outsider. At the Joseph Smith Memorial Building in Temple Square here, a 67-minute film dramatizes the prophet's life, including his visit from the angel Moroni and his discovery of buried golden tablets, written in ancient Egyptian, that told of an ancient lost tribe of Israel that made its way to North America to be visited by Jesus thousands of years ago. (Today, though, the controversial polygamy of Smith and successors like Brigham Young is completely absent from the church's official narrative; it's been officially condemned by LDS leaders for more than a century.)

Church leaders, of course, are seeking believers, not voters, and the story serves a different purpose for proselytizing than politicking. Earnest young Mormon women guide visitors around the Temple Square, explaining Smith's prophecy and politely offering to send a free copy of the Book of Mormon. As I filled out a mandatory comment card after the tour, my guides sang me a hymn and told me to pray more often. After the Smith film, another pair of guides approached, eager to see if I wanted to learn more about him.

After fighting -- sometimes literally -- with federal officials in the 19th century to win acceptance for the home they carved out for themselves in Utah, Mormons today still seem to have to work to have normal relations with the rest of the nation, even though the church now has more members than some mainline Protestant denominations. Some Mormon elders blame lingering bias for why Romney now lags behind Sen. John McCain in the polls ahead of Tuesday's key votes in more than 20 states.

"If you're looking for the qualities that people profess to want in a leader, there's no way McCain can stand up to Governor Romney," Howard Hurst told me Friday, perched on a stool in the visitor's center at Temple Square. Hurst, 78, and his wife are on an 18-month mission here from their home in Paradise, Calif.; he works six days a week in the visitor's center across from the Salt Lake Temple. "There seems to be a phobia, that [voters] completely disregard everything that he's demonstrated in this life for the sake of rumors that they have heard... Just because of this mysticism of the church, it's kind of like you've got a ghost in the closet."

And in some states, and with some voters, Romney's faith has probably hurt him. Some of Mike Huckabee's most passionate Christian conservative supporters say they think the LDS church is a cult. Huckabee himself famously asked a New York Times reporter if Mormons believe God and the Devil are brothers.

The funeral may have caused Romney more logistical problems than political ones. Romney leads in very few Super Tuesday states, and heavily Mormon Utah is one of them. The campaign would never have stopped in Utah if not for the funeral -- Madden said strategists were "pretty comfortable" with his lead over McCain there, an obvious understatement.

But no matter how much he's struggled with what role his faith should play in the campaign, ultimately, Romney -- and, apparently, Hinckley himself -- never saw Mormonism as a dealbreaker.

The candidate sought guidance from the prophet before he entered the race, and he wasn't warned off. "With a twinkle in his eye, [Hinckley] made the comment I've pointed out before, which is that he said if you decide to run and you win, it will be a great experience," Romney said Friday. "If you run and lose, it will also be a great experience."