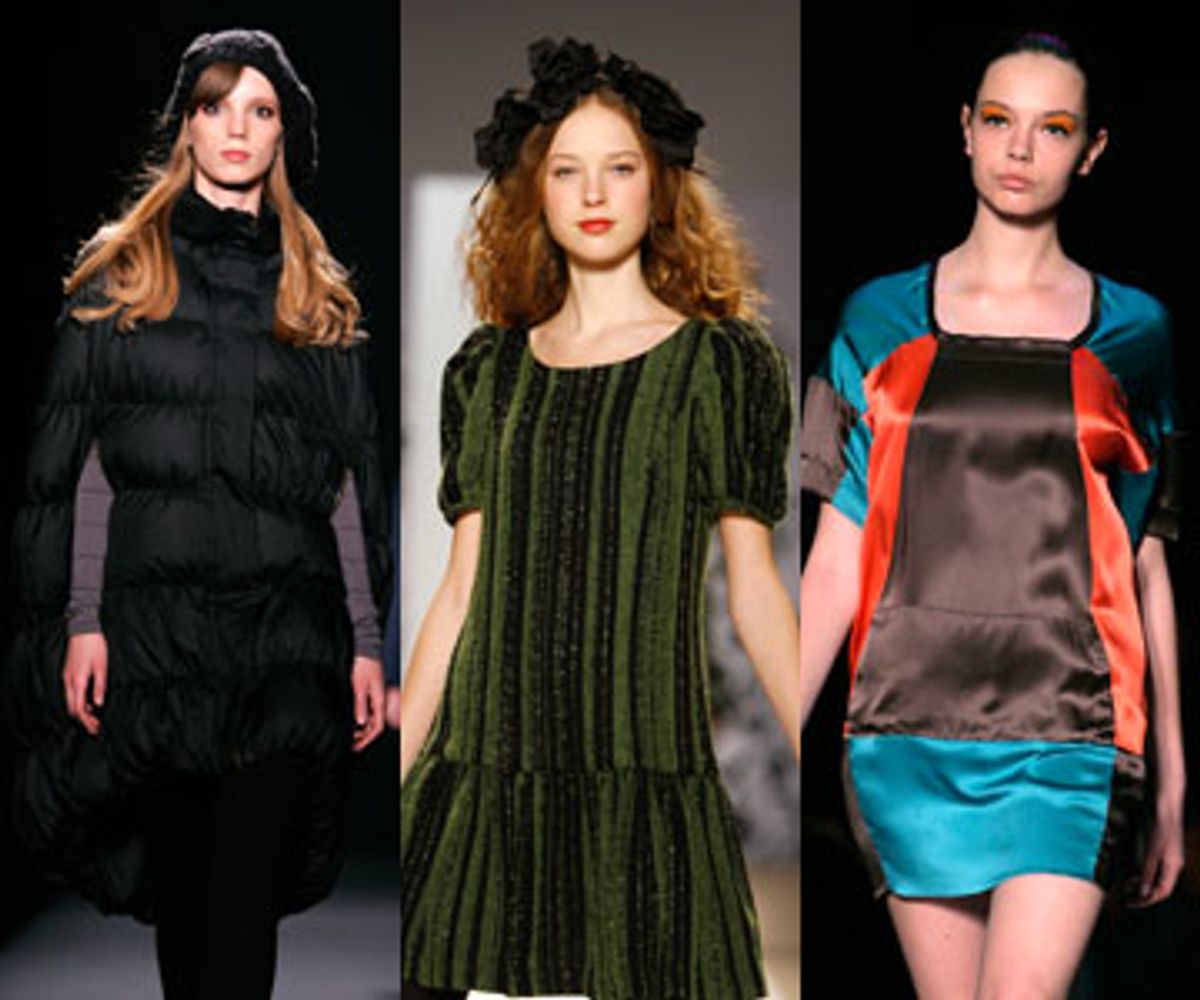 While I had always secretly considered myself a closet fashionista, in my dark private moments, the actual honor hadn't been officially thrust on me until recently, when I started "Critical Shopping" for the New York Times.

Since then I have been on a total-immersion fashion crash course, flung headfirst into racks of swish, slash, trash and occasional genius, and walking out of my house with an increasingly bizarre confidence in the combination of short pants and sockless ankle boots. But there is more to couture, apparently, than just never throwing anything away and making sure everything is black.

This was my first stab at penetrating the glib, fripperous, cutthroat world of New York Fashion Week. I was as blind as a newborn pinky mouse.

I thought there would be an informal hazing before I was allowed into the big white tent at Bryant Park, where most of the shows were held. As Bumble and Bumble deloused my hair, someone would make me sign an affidavit about how many It Bags I'd touched in the last 14 days. A member of the elite Lagerfeld Jugen, in fingerless gloves and brownshirt uniform, would point an infrared pen perilously close to my retina and ask me to pronounce the name "Ghesquière."

Well, it hasn't been anything like that -- just a big, sleazy, nonchalant prom with a lot of air kissing.

The event, particularly in the swarms around the tent lobby, is oddly informal, and surprisingly unglamorous. The lobby is, in effect, a portable mini-strip mall of installations from companies you wouldn't expect to have such a visible presence here: for example, DHL shipping, whose booth offers worldwide mailing service and cookies with the company's logo printed on them. Lycra has a coffee bar (the Lycra BRA-sserie -- get it?) full of decapitated, armless mannequins wearing the latest in Lycra's contributions to the world of lingerie.

The crowds elbowing each other to cram into the shows are largely composed of ill-mannered fashion student cliques with tight little deconstructed jackets, suede slouch boots, thigh-length cowl-neck sweaters and shellacky "Beyond Thunderdome" mullets. These unisex persons will gladly press their elbows into your jaw to better photograph the C-list celebrities being dragged around the room by their handlers, particularly the boys and girls in the cast of the reality TV show "Make Me a Supermodel" who, like Miss America contestants, were forced to loop around the lobby en masse and walk into the shows together, wave at the crowd with toothy, overly bright smiles and try to project something from their eyes besides flinty exhaustion. Once enough cameras had surrounded them, these poor kids would be directed to perform an air-punching group shout of purest TV enthusiasm: "Yeah!!!"

It made for an odd tension; the reality TV kids were clearly dying for big Costco loads of attention, nakedly offering themselves to be loved by a dubious and snotty crowd that found them somewhat deserving of derision. This imperative was confounded, however, by their exoskeleton of black-clad, swaggering producers, cameramen and bully-ish security personnel, who took it upon themselves to casually abuse anyone who got too curious, produced a camera or accidentally walked too close.

Love me!/Back away. Look at me!/No looking at her. Photograph me!/No cameras. (I saw a few of the girls hiding next to the Port-O-Lets later in the day, red-eyed and weak from severe human burnout. It was literally the only place their producers weren't following them around and trying to siphon more TV energy out of them.)

I caught on pretty quickly that the actual watching of models on actual runways, wearing actual clothes, is a pretty tiny part of the whole Fashion Week scene. The insiders prefer the behind-the-scenes action, either backstage, offstage, off-campus (at such tony venues as Harry Cipriani) and at after-parties in bars, the locations of which are closely held secrets that anyone sitting next to you will beg you for directions to.

So I ventured backstage to ask irrelevant questions of the designers and ogle the gorgeous little girls with their hair in curlers: 8-foot-tall high school girls with the bones of model airplanes and the faces of 8-year-old children. Their thighs are the same width as their ankles; their arms no bigger around than a silver dollar. A model named Carly, age 15, quickly became my favorite -- an entirely sweet, corn-fed child. She is becoming famous on the runway for jutting out her tiny hips, leaning her shoulder blades to curve at a 30-degree angle over her 6-inch heels, stupefying her already bewildered expression into "someone slipped a Darvon in my Mountain Dew" and stomping down the catwalk looking like a zombie Slovakian sex slave.

The shows I've seen in the last few days (and there are many more to come) did have certain themes in common, suggesting either collusion, conspiracy or everyone coming up with the same bright new ideas at the exact same time:

3. The color wheel of today and the foreseeable future is still stuck in the Lost Tomb of Sid and Marty Krofft. Every artificial flavor in the Dirty Sherbet freezer: anemic raspberry, radiator Kool-Aid, bleach-stain canary, Milk of Pepto-Bismol. There were, however, a couple of lighter brown tones I hadn't seen before, which I took to calling Triscuit and Gerber Veal, since it looked like it came from a baby food jar.

4. Stylist Rachel Zoe (notorious for creating emaciated fashion icons out of Nicole Richie and Mischa Barton, among others) was barely recognizable in the front row of Nicole Miller -- I thought she was an Olsen twin. "Raisin Face had some work done," said a woman next to me who writes a fashion blog in Chicago, referring to Ms. Zoe by her unkind (and now ill-fitting) Perez Hilton nickname. Rachel Zoe's dress, however, looked like a taffeta yurt.

And so I plunged into the shows with my intake valve wide open, trying to take in as much of the experience as possible.

The Nicole Miller show was my first adventure (and the last time I will ever, ever sit in the back row).

While Miller, who was kind enough to grant me a quick interview before the show, was deeply cool, grounded and friendly, with an impressively quick sense of humor, this collection was not thrilling. Miller, usually known for her slinky, 1940s, body-conscious big-hot-date-night dresses, seemed to have been inspired by a winter car wash in Wisconsin.

Dark, baggy and quilted prune shapes were topped with thick, black cable-knit sun visors. Colors better left not speaking to each other were thrown into bed together on boxy, two-tone blousons: battleship and butternut; exorcist split-pea and Muppet grape. Not seductive, but practical for avoiding sex and/or hypothermia.

Video: At the tents

Then it was on to the much-anticipated Erin Fetherston, who is surfing a monumental wave of hype. Fetherston drew, by far, the most celebrities to her show. (Most A-listy: Anne Hathaway, looking poised and divine in a beige sequin minidress; most attention-demanding: pothead author/socialite Arden Wohl, in signature flapper headband and off-shoulder tunic.) As for the garments themselves, Fetherston's catwalk was full of Degas Quaalude Ballerinas, moss-green velvet Hobbit Sluts and Pre-Raphaelite Hippy Brides; these designs were reportedly inspired by the fact that Fetherston had once played Juliet in high school.

I needed to go to the People for a verdict, so I bummed a cigarette from two underage women outside the show, afterward.

"I loved that black dress with the puffy sleeves!" one girl enthused.

"I hated that dress with the puffy sleeves," I snarled. "I've been living in fear that cut would make a comeback. No waist, huge shoulders, like a hefty bag with football pads. I called it 'Bridesmaid Revisited.'"

"Yeah, yeah, but it's perfect for me," said this young lady, who revealed a similar high-necked ivory lace number under her coat. "I like it. It shows my legs and not my tummy or anything else."

Fetherston will probably do great with those socialites and L.A. types who embrace that "Don't look like you're trying too hard" look. Oh, heavens, what time is it? I just rolled out of my bed and threw on some Lapis Lazuli tights and this Klimt-floral gauze thing, teased out my split ends and voilà. Got any Klonopin?

The insufferable people standing in front of the line for the Alexandre Herchcovitch show made me want to commandeer the Mercedes SUV sitting in the tent and pull a Lizzie Grubman.

But the show, in my Humble O, was a revelation: very daring, lots of spirit, tons of artistry, skill and intelligence. There are some designers whose work absolutely leaps out and throttles you with its brilliance; this guy has the voodoo.

He used interesting shapes: odd bells made of black Persian lamb, like small hoop skirts worn around the neck and shoulders, paired with long, black wool gowns with whole surprise sections of sheer silk. I called it "Hunchback of the Breakfast at Tiffany's." It was new and a little disturbing. I loved it.

There were bull's-eye-target spinnaker prints folded into geometric, feudal Japanese shapes: Seven Samurai meets '80s New Wave, with just a touch of young Nadia Comaneci, and half-remembered shapes from past events you couldn't quite place. The show was a lavish stomp through a design mind spilling over with fantastic instincts for fusing craft, history and the inspired unimaginable. (Soundtrack: "Sharkey's Day" by Laurie Anderson. Nice to hear William Burroughs' voice growling out over the loudspeakers.)

The boxy orange dress Herchkovitch used for his finale I nicknamed "2001 Space Odyssey Stewardess Goes to Prison," but it forced me to rethink why that might be a bad thing.

Backstage, an exhausted Alexandre looked exceptionally lifeless and boring, slumped on a stool in a skull T-shirt.

He's a purist, I heard tell. All of his energy, apparently, goes right on the stage -- he saves none for himself.

We ended up easily crashing the show of redheaded Ashleigh Verrier, who appears to be a very ambitious young woman. She just graduated from Parsons in 2004, when Saks Fifth Avenue promptly purchased her thesis collection. She seems to be primarily designing for herself: Everything is in a redhead palette -- ivory, puce, purple/brown sharkskin, bronze, raspberry, ballet pink and a splat of navy.

Verrier's models seemed to have been directed to affect a strange, sticky type of prance, as if the entire runway was made of hot Jujubes.

The people sitting next to me agreed: The clothing was made to appeal to women 17 or 70. That's just too permissive; there is something that feels slightly disingenuous in artistry that is too easily liked by too many.

Verrier's designs were very safe, very 1940s Winter Fantasy Barbie, with fur and rhinestone details. Of course, there was Verrier's obligatory rethink of the classic Chanel bouclé suit, onto which she stuck metallic silver ruffles. (This "redesign the classic" stunt is the equivalent of the omelette at a sushi restaurant; the litmus test for certain people that tells them who you are. Or so I have read.)

"Hmmm. Pretty," women were saying out of the sides of their mouths, after the show, disappointedly.

Pretty is pretty, but during Fashion Week your eye needs a few turnoffs to get truly excited. You crave that intoxicating moment of transgression when disgust flips into lust.

And I am hoping, now, being ever-so-slightly less ignorant of all things Fashion Week than I was a few days ago, to find more original dissonance and less of the mass-market TV baby stuff that seems to have infected this most hallowed and snotty scene with an overdose of homogenizing groupthink. This is, after all, supposed to be high fashion. Sophisticated, like. One hopes to taste, explore and cherish the deeply exclusive and the mighty weird.