In Fairfield, the former Democrat stumps with the GOP front-runner -- and plants one on another Republican. 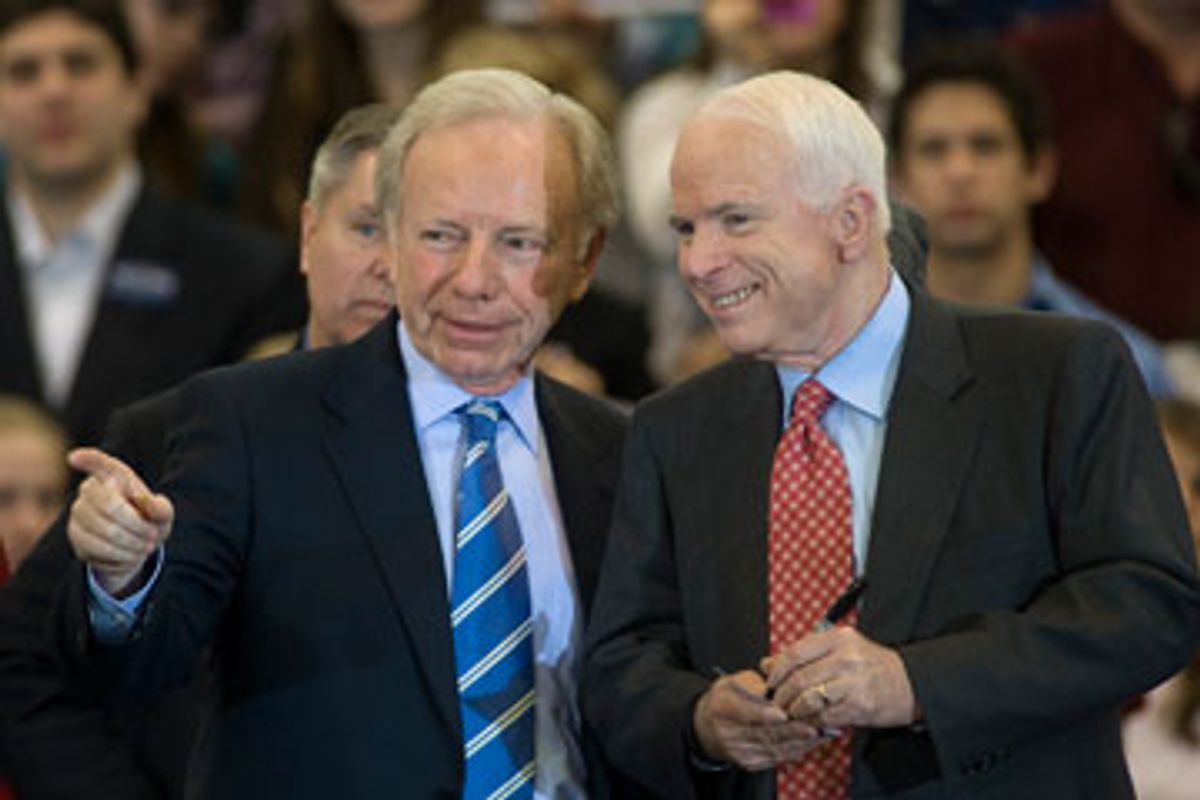 There, on the stage of the Fairfield University gym, in open-necked pink shirt and blazer and holding a mike, stood Shays, R-Conn., who kissed President Bush last week at the State of the Union address. He was introducing Lieberman, I-Conn., who even more notoriously exchanged a kiss with Bush at the same event in 2005. Lieberman's job, in turn, was to warm up the crowd for Sen. John McCain, R-Ariz., who famously broke a long period of frost with the Bush administration by -- eyes closed, nose burrowing into shoulder -- hugging the president during a campaign stop in the summer of 2004.

As Shays handed the mike to Lieberman, Connecticut's lone House Republican and its formerly Democratic senator drew very close together. From up on the press platform, it was hard to tell how close. "Did they?" I asked Hartford Courant reporter Mark Pazniokas. He was uncertain. "I was looking down to write something," a blogger named Connecticut Bob chimed in. "I missed it."

It was left to Lieberman to erase all doubts. "Notice we kissed each other," he announced to the crowd of 1,500. "I don't want to go into details."

Though he still caucuses with the Democrats, Lieberman's habit of crushing on Republicans, particularly the bellicose kind, is well known. But he and GOP front-runner McCain and Lieberman have swapped a lot more than spit. Like a yin and yang, they have been fetally curled toward each other for years. They have had their differences with the Bush administration on other issues, but together they have supported going into Iraq and have been even more supportive of staying there. Trying to get McCain elected president is only their latest joint initiative.

Getting Connecticut in the red column come fall, however, may be too much for McCain and Lieberman to ask. McCain won the state easily from George W. Bush in the 2000 Republican primary, and looks set to win it again Tuesday. He has been endorsed by Gov. Jodi Rell, and he was up 22 points in one recent poll. But Republicans have been decimated in a state that has become reliably blue in presidential elections. Some of the state's voters have buyer's remorse about the senator who shared the stage with him Sunday, in large part because of the issue that both McCain and Lieberman have made their own: Iraq.

Outside the gym, among the protesters who'd gathered for the McCain rally, the rancor was aimed at both the candidate and his biggest local booster, and it was about Iraq. Mary-Ann Tirone Smith, a successful crime novelist, held a sign that said, "Lieberman and McCain -- Warlords." It was streaked and spattered with faux blood, sort of like the cover of a crime novel.

Across the street from Tirone Smith with about 100 noisy antiwar protesters was Jim Dean, Howard Dean's brother, who runs a grass-roots group called Democracy for America. Eight years ago Jim Dean was inside the same gym for a McCain rally. In 2000, "I was in that building for a guy who was against special interests and would take very seriously the act of sending other people's kids to war," Dean told me. "The John McCain I knew would never have voted for this war and wouldn't be pandering to conservatives by taking a stand against a woman's right to choose."

Inside the gym, support for the Iraq war earned Lieberman and McCain their biggest applause of the afternoon. There was no doubt that the crowd had come to hear about security and the battle against Islamic terror, more than the economy or immigration or climate change. People who attended the 2000 event describe it as loud, raw and urgent; Sunday's crowd included more casual political windowshoppers, and came to life mainly when McCain promised, about Iraq, "I will never surrender," and when he made his usual promise to track Osama bin Laden to the gates of hell.

Even the Man from U.N.C.L.E. was there for that reason. "I'm listening to all of them," he said. "The key for me," said Robert Vaughn, who played TV master-spy Napoleon Solo from 1964 to 1968, "is how the next president handles Islamic jihad."

And there were those in attendance who were drawn to McCain as a supposed maverick. Robin Sandler, who had brought his 12-year-old son from Branford, Conn., to see the candidate, said he admired McCain's independence. But he was undecided, and was hoping for more signs of that independence. "He might say something that hits me in the face, or it might be more subtle, but I'll know it when it comes," he said.

McCain demonstrated his purported cross-party pull by showcasing his unusual coalition of centrist Republicans (Shays), movement conservatives (former Texas Sen. Phil Gramm, also onstage) and hawkish Democrats (Lieberman). He also brought out someone who made him look relatively young by comparison -- his mother, Roberta, who turns 96 on Thursday. She was, however, one of the few women brought out for public display, at an event where the political celebrities skewed white, male and old. And whatever McCain's appeal might be nationally, the presence of one of the other women onstage, ex-Rep. Nancy Johnson, spoke volumes about the fortunes of the Republican Party in Connecticut and New England.

"It's a great day to be a Republican," Dick Foley, a mirthful former GOP state chairman, teased me right before the rally. But in reality, the state GOP is a train wreck. Connecticut's most popular Republican, the reclusive Gov. Rell, did not attend the Fairfield rally. To fill the stage with Republicans, McCain had to enlist two ex-members of Congress, Johnson and Rob Simmons, and a third who had not served since 1982, Larry DeNardis. Both Johnson and Simmons were swept out of office by Democrats in the 2006 election, Johnson after seven terms.

Democrats now hold two-to-one majorities in each chamber of the Legislature, and the top-ranking Republican state senator was recently forced out for asking a Mob-connected trash hauler to rough up his grandson-in-law. Shays, the Connecticut GOP's only congressman, and the last Republican House member in New England, faces a tough fight this year from a well-funded opponent. And then there's the matter of former Gov. John Rowland. From the stage, McCain delivered a slap at the state's most famous Republican, who was not in attendance. "Governors are important," he said. "You know, there were these two prisoners standing in a chow line, and one of them says to the other, 'Hey, the food was better when you were governor.'" Rowland, a Republican, went to prison in 2005 for corruption.

Meanwhile, because of pressure from party insiders, and perhaps because of confidence in the party's prospects this fall, the state's Democratic hierarchy has done something it has resisted in the past. Lieberman's decision to campaign with McCain alongside the remnants of the state's GOP has earned Lieberman a public rebuke.

In 2006, when Lieberman lost the Democratic primary to Ned Lamont and ran as an independent, the state party establishment refused to sever its ties with him. Party big shots like Sen. Chris Dodd campaigned for Lamont, but state chairman Nancy DiNardo never really spoke out against him.

Lieberman won the general election with 50 percent of the vote by taking 70 percent of Connecticut's Republican vote. He still feels slighted by the Democrats, and grateful to GOP voters. "I still have a few scars in my back," Lieberman told the Republican crowd Sunday. "And it's because of you and people like you around Connecticut that I have the privilege of continuing to serve. A lot of you crossed party lines to vote for me."

DiNardo, for her part, finally boiled over last week and issued a blistering statement on Lieberman's McCain-related activities. DiNardo pronounced herself "disappointed beyond words with Joe Lieberman, as are a lot of Connecticut Democrats -- saddened, surprised, and truly disheartened by just how completely he has abandoned the Democratic principles that have guided him over the years and the Party whose members have supported him." In particular, DiNardo accused Lieberman of going back on a campaign promise to help get a Democrat in the White House in 2008.

McCain, meanwhile, has amends to make with his own party. He and the hardcore Bushies, who once included Connecticut Lt. Gov. Michael Fedele, are still an uneasy fit. The Limbaugh crowd likes Mitt Romney better. Mary Matalin, on "Meet the Press" Sunday, was publicly baiting McCain to be a man and ask Mike Huckabee to bow out so McCain and Romney can go head to head. Even here in McCain-friendly Connecticut, far more Republican officeholders signed on with Rudy Giuliani than with McCain in the early going.

McCain does, however, have one person he can count on forever. Harry Truman said if you want a friend in Washington, get a dog. In McCain's case, Lieberman will do.

After the event in Fairfield, Lieberman and McCain stayed close, churning through the crowd together to visit directly with the press. McCain once again had a chance to answer, i.e., not answer, the inevitable question about whether he would tap Lieberman for a running mate, as a fellow named Gore did in 2000. Lieberman has said he will not. McCain's response on Sunday: "I say after next Tuesday, if we win then, there will be that consideration. Joe Lieberman has contributed so much to America, I would be honored to serve by his side in any capacity."