Republican hard-liners have a potent hatred for their front-runner. But soon he may be sitting prettier -- with a win by Hillary Clinton. 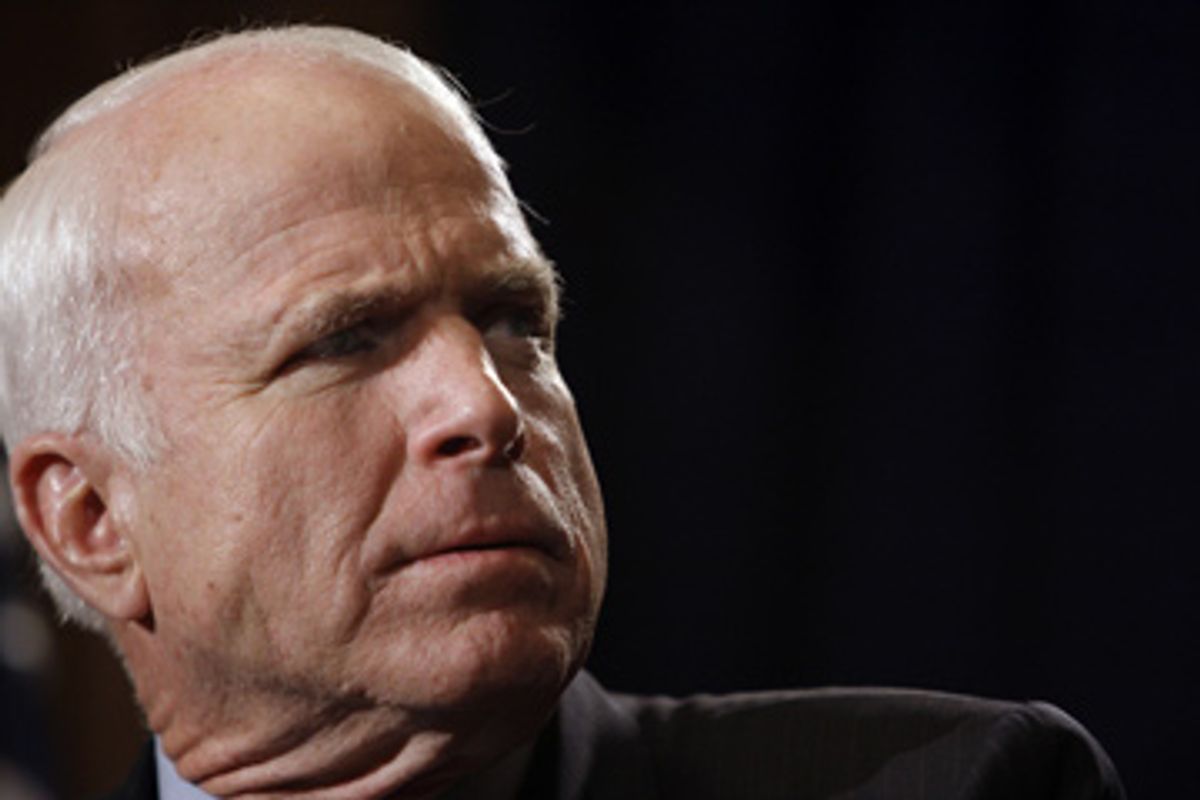 When Republican Rob Haney goes door to door to stump for candidates, he asks them to rate John McCain on a scale from 1 to 10. "The people who don't know much about politics rate him a 9 or 10," says Haney, who is a state party chairman in Arizona's 11th Legislative District. "The people who know what's going on rate him a 1 or a 2, or ask, 'Can I rate him a minus?'"

Haney, a 66-year-old retired IBM engineer, has been a persistent thorn in McCain's side in recent years. One of his main missions is to reveal what he sees as the truth about McCain: "We in the conservative Republican base do not feel he is a Republican. He is a liberal-moderate."

Haney isn't alone in his contempt for McCain. In a January straw poll of the Maricopa County Republican Committee, Mitt Romney won the support of 26 percent of the 721 activists who voted, while McCain came in fifth (behind Fred Thompson, Ron Paul and Duncan Hunter), with just 11 percent. McCain did score big in one survey the GOP group did: 59 percent of the activists named him an "unacceptable candidate."

The Maricopa County activists who voted in the poll are hardly reflective of Arizona Republicans as a whole. McCain is expected to easily win Arizona's GOP presidential primary on Tuesday; a mid-January poll from Maricopa County PBS affiliate KAET-TV and the Arizona State University journalism school showed that 41 percent of Republicans were leaning toward supporting McCain, while 18 percent were leaning toward Romney.

But the virulent strain of conservative anger toward the longtime Arizona senator -- even here on his home turf -- shows that McCain could face problems with the party's base if he wins the nomination. Thanks to the ailing economy and the morass in Iraq, the GOP is generally in the pits with American voters -- and McCain may need every ounce of support he can muster from party activists to help mobilize voters against the Democrats in the fall. In fact, what McCain may need most to overcome the spat with GOP hard-liners is the rallying cry that would accompany a Democratic primary win by Hillary Clinton.

Right-wing talking heads, including Rush Limbaugh, Sean Hannity and Michelle Malkin, have been seething about McCain for months. Limbaugh warned in January that if McCain gets the GOP nomination, "it's going to destroy the Republican Party, it's going to change it forever, be the end of it. A lot of people aren't going to vote."

Such hyperbole is to be expected from the likes of Limbaugh, but there are some tangible issues with McCain that rile folks like Haney. At the top of the list is immigration, as contentious an issue in Arizona as anywhere else. The state has more people illegally crossing the border from Mexico than any other. McCain has long championed a comprehensive solution that includes not only increased border security but also a guest-worker program and a plan to grant legal status to many of the estimated 12 million people who are in the United States illegally.

With the collapse of immigration reform in the U.S. Senate last summer, McCain tacked rightward, saying that the border needed to be secured before additional reforms could be passed. But Haney complains that McCain still supports providing undocumented workers with legal status rather than deporting them.

"He's going to defend Iraq's borders, yet he won't do a darn thing about our borders where the terrorists are coming across from the terrorist countries," Haney fumes.

That kind of emotional reaction to McCain, if overheated, extends to plenty of other issues: Haney complains that the McCain-Feingold campaign-finance legislation "takes away freedom of speech as guaranteed in the Constitution." He's angry that McCain would support tackling global warming with "all those treaties that turn over our sovereignty to other countries." And he argues that McCain "has been the darling of the press for years," masking what he refers to as the senator's secret liberal record. "It's an unending litany of items that we find unacceptable in a Republican candidate who would represent Republican values," Haney says.

In reality, McCain's voting record in the Senate is by most measures conservative. The American Conservative Union has given him a lifetime ranking of 82 percent, although his 2006 ranking was 65 percent. Conversely, the liberal Americans for Democratic Action reports that McCain voted its way just 14 percent of the time between 2000 and 2006.

McCain supporter Mike Hellon, who has served as both head of the Arizona Republican Party and as a Republican National Committee member, doesn't mince words about hard-line conservatives who demonize McCain. "It's the wacko end of our party -- the people who have a whole litmus test of hard-nosed immigration issues and social issues," Hellon says. "And if you don't line up with them on all of them, they want to throw you out of the party."

Hellon says the McCain haters, while vocal, are so out of step with the majority of voters that "anybody they would support will never, ever win a general election."

Margaret Kenski, a longtime GOP pollster who has done work for McCain in the past, says that the conservatives who are upset with McCain make up between 10 and 15 percent of Arizona Republicans. But she says that, particularly in a national race, candidates strategically try to hold on to support from 90 percent of the party base while tacking center to attract independents. Kenski says her polls have shown that McCain's favorability rating in Arizona tends to hover around 60 percent, which she says is "as good as any politician."

But William Dixon, the head of the University of Arizona political science department, thinks there is a distinct possibility that conservative anger toward McCain could cause him problems in the general election. Dixon says conservatives disdainful of McCain aren't likely to vote for a Democrat in November but might choose to sit out the election altogether. Otherwise, much may depend on which Democrat wins the nomination. "I would guess that they would vote for McCain to keep Hillary out," Dixon says. "I don't know that they would do that for Obama. They don't know enough about Obama to hate him. They know enough about Hillary to hate her."

As McCain eyed a 2008 presidential run, he took some steps to shore up support among conservatives who were apparently alienated during his 2000 run for the White House. He backtracked from his censure of Jerry Falwell and Pat Robertson as "agents of intolerance" by giving a commencement address at Falwell's Liberty University. He embraced the Bush tax cuts, which he had initially opposed. And he has abandoned additional campaign-finance legislation that he once championed.

Still, maybe those moves weren't enough. Asked whether he'd support McCain in a race otherwise offering the specter of Hillary Clinton as president, Haney replied: "I don't see a bit of difference between the two of them."

GOP pollster Kenski doesn't think the vitriol among conservatives will really end up hurting McCain in the November election. "I think he can deal with that," she says. Instead, she suggests McCain may face a bigger problem with the national electorate: the way in which war-weary Americans will view his unwavering support for the Bush administration's surge in Iraq.

Meanwhile, Dixon says that angry conservatives actually have the real McCain backward: Rather than a closet liberal, he is substantially more conservative than typically portrayed in the press. "If anyone is misinterpreting McCain," says Dixon, "it's Democrat-leaning independents who think he's a Republican maverick."

Jim Nintzel covers politics for the Tucson Weekly and teaches journalism at the University of Arizona.