Super Bowl shocker: Giants pass rush and a spectacular throw and catch doom the Patriots and their undefeated season. 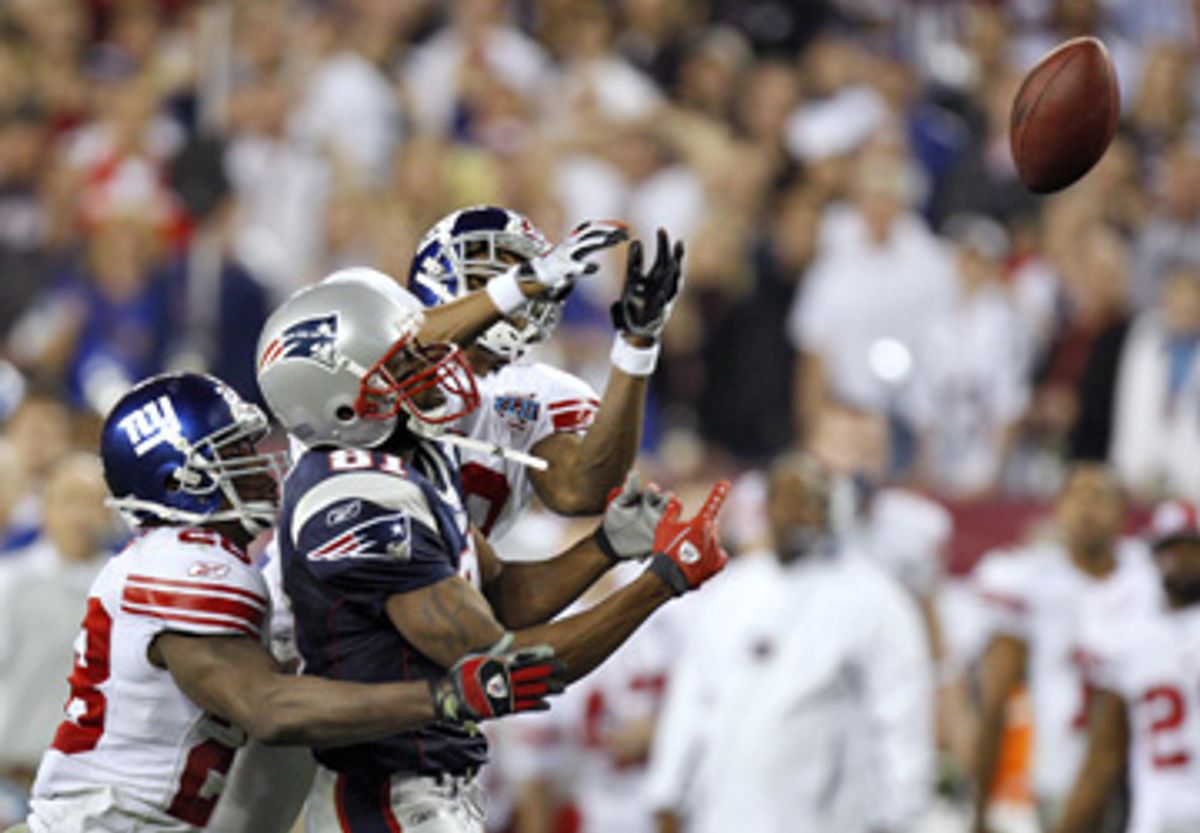 The Giants followed the blueprint they and others had talked about but couldn't make work in any of New England's first 18 games, all of them wins. They got pressure on quarterback Tom Brady, knocked him down, hurried him and refused to let the Patriots' record-setting offense get into a rhythm.

Except at the beginning and the end. The Patriots drove downfield and scored on their first possession, then didn't get into the end zone again until late.

They took over after a punt at their own 20 with 7:54 remaining in the game, down 10-7. Brady, throwing quickly and relying heavily on Wes Welker and Kevin Faulk as targets, drove the Pats to the New York 7, then hit Randy Moss on third down for the score with 2:42 to go. It was the kind of late drive Brady and the Patriots have crafted time and again during their seven-year run of success, which has included Super Bowl titles after the 2001, '03 and '04 seasons.

And it was the kind of drive Eli Manning and the Giants needed to pull off one of the biggest Super Bowl upsets, one that, point spreads aside, felt bigger than the Patriots' own stunner over the St. Louis Rams six years ago.

Starting at the 17, the Giants had moved near midfield and faced a third-and-5 at their 44 with 1:15 left. Manning took the snap in the shotgun and was immediately under pressure from linebacker Adalius Thomas, who had beaten left tackle David Diehl on Manning's blind side.

Manning stepped up to avoid him, right into the teeth of Richard Seymour and Jarvis Green, rushing up the middle. Both men grabbed a handful of the back of Manning's jersey. The quarterback staggered backward, then spun to his right and broke free, sprinting toward the right sideline to buy time. He set himself and heaved the ball downfield as three more blue shirts bore down on him.

That was the first half of the play of the season.

At the other end of the ball's flight, Giants receiver David Tyree outjumped Patriots safety Rodney Harrison for the ball, then somehow held onto it as Harrison grappled with him. He hit the ground on his back, the ball pinned to the top of his helmet with both hands, Harrison pulling and swiping madly.

The Giants hadn't won yet, but all of a sudden it was possible that the Drive would be the one authored by Manning, not Brady.

Two plays later, on third down, Manning hit Steve Smith for 11 yards, Smith making a nice play to stay inbounds and get the first down, then get out of bounds to stop the clock with 39 seconds to go in the game. Then Plaxico Burress, the Giants' best receiver, kept quiet all night, lost Ellis Hobbs with a slant-and-go head fake. Manning, protected well against a blitz, lofted the ball to Burress as he faded toward the back left corner of the end zone. Touchdown. The Giants had a three-point lead with 35 seconds to go.

That's enough time for Brady and the Patriots, especially when they have all three timeouts. But not this time. Not against this pressure.

Brady's hurried first-down pass fell closer to cornerback Aaron Ross than any receiver. On second down, Jay Alford plowed up the middle and drilled Brady for a 10-yard sack. On third-and-20 Moss got open on a slow-developing play, but Brady's bomb couldn't reach him. On fourth down, with 10 seconds left and the Patriots needing 84 yards, Brady heaved a desperation throw downfield toward Moss. Incomplete.

"I had a feeling it was going to come down to us with a few plays," Brady said after the game. "Just didn't get it done."

The Giants got it done. They started the season with their coach, Tom Coughlin, on the hot seat. Much criticized, especially by retired star Tiki Barber, for his strict ways, he'd avoided the ax in the off-season, but signed only a one-year contract, not exactly a vote of confidence. His future with Big Blue looked short when the Giants dropped their first two games.

But they beat Washington in Week 3, sealing the win with a dramatic goal-line stand after a first-and-goal at the 1. That started a six-game winning streak that put them in the thick of the playoff race. They cooled off down the stretch, finishing 10-6 and making the playoffs as a wild card, a spot they'd already clinched when they lined up at home against New England in Week 17, hoping to spoil the Patriots' perfect season.

That game was a humdinger, the Patriots rallying to win 38-35 and probably not figuring to meet the Giants again in five weeks. The Dallas Cowboys and Green Bay Packers were the favorites in the NFC, but the Giants, playing inspired ball after that loss to the Patriots, beat them both on the way to the Super Bowl. Those two wins, plus an earlier playoff victory in Tampa, gave the Giants a 10-game road winning streak coming into Sunday's neutral site game in Glendale, Ariz.

Hardly a qualification against one of the great teams in NFL history. But the Giants served notice by taking the opening kickoff and marching from their own 23 to the Patriots 16, a drive that took almost 10 minutes of game clock and resulted in a field goal. The Patriots answered right back with their own 56-yard drive following Laurence Maroney's good kick return. Maroney scored from the 1 on the first play of the second quarter.

The Patriots led 7-3, but then a funny thing happened. The Giants got their pass rush revved up, knocked Brady off his game -- and still trailed, 7-3, through the end of the third quarter. Unlike New England, New York had its chances, but one drive was spoiled when a short pass bounced off Smith's arms and into the hands of Hobbs for an interception at the New England 10, another when Ahmad Bradshaw batted a fumbled ball forward on a third-down play, resulting in a penalty that drove the Giants out of field-goal range.

The game took on the look of one of those almosts. The Giants were outplaying the heavy favorites, but this was just the kind of game the Patriots have made a habit of winning. Their three previous Super Bowl victories had all been by three points. This was a team that quite simply did not lose.

No Super Bowl upset will ever match the New York Jets beating the Baltimore Colts in January 1969, a result thought to be literally impossible by many, a team from the inferior AFL beating an NFL power. But this one tops all the others for sheer improbability.

It looked a little like Buster Douglas' upset of Mike Tyson for the heavyweight title in 1990. In both, the underdog was carrying the action, but you kept expecting the favorite to rally. And in both, the favorite did. Tyson knocked Douglas down. Brady drove the Patriots to the go-ahead touchdown.

But just as Douglas got up and finished Tyson, Manning calmly led the Giants to that last touchdown.

In the Giants locker room after the game, Manning and his older brother Peyton, last year's Super Bowl-winning quarterback, put their heads together amid a crush of cameras and microphones. "The play to Tyree," Peyton Manning said, "that'll go down as one of the all-times."