McCain spends the day before Super Tuesday in Romney's backyard, a poke in the eye that had more symbolic than strategic value. 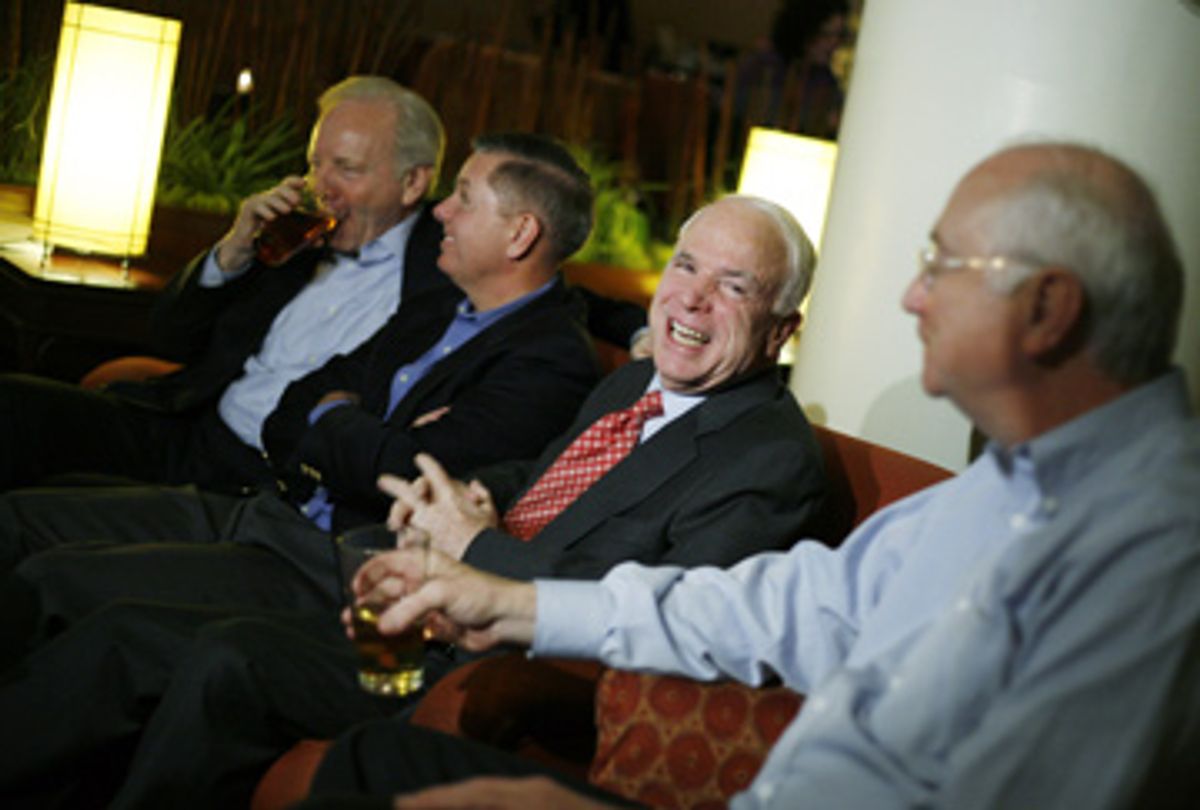 There was no particularly good reason for John McCain to spend the morning before Super Tuesday here. Boston has been Mitt Romney's home for more than 30 years; he was governor for four of them. Polls show the state is probably out of McCain's reach. And with more than 20 states voting Tuesday -- some of them up for grabs -- hanging out on Romney's home turf would seem like a waste of time.

Except that by this point in the campaign for the Republican presidential nomination, John McCain really doesn't like Mitt Romney. And neither do his strategists, who are feeling confident enough about Tuesday to get a little, well, obnoxious. Which is why McCain woke up in Boston 24 hours before the Massachusetts primary, went out to raise some money, and then headed over to Faneuil Hall to try once more to get into Romney's head.

"I believe we have a very good shot at carrying the state of Massachusetts tomorrow," McCain told a crowd of about 250. That's almost certainly not true; McCain's aides know he probably won't win here, and there's no reason they would have told him otherwise. But McCain, who appeared to take no small amount of joy in needling Romney at last week's GOP debate in California, had another mischievous look on his face when he discussed his last-minute visit to Romney's backyard. "He's certainly welcome to come to Arizona if he'd like," McCain said. "The weather's very nice."

What the trip was really about, it appears, was making sure McCain would have one last chance to tell Romney where to stick his "contrast ads" and the money he bought them with. (And, for that matter, the horse he rode in on.) It's a sentiment shared by most of Romney's rivals for the nomination, whether they're still in the running or not.

McCain advisors think the race could be over Tuesday if he does well enough. Polls have him up big in New York, New Jersey and Connecticut -- three heavily populated states that give all their delegates to the statewide winner, in a move originally engineered to give local boy Rudy Giuliani a boost. Giuliani, of course, is backing McCain now, and just by winning those three states, McCain would get a big jump on Romney in the GOP's delegate count. McCain also has hefty leads in recent polls in Illinois and his home state of Arizona, as well as a slight edge in Georgia, Tennessee and Alabama. He's also up in California, though polls have tightened there a bit; the largest state to vote Tuesday awards most of its delegates according to who wins each congressional district.

A die-hard football fan, McCain even passed up the chance to go to the Super Bowl in Glendale, Ariz., so he could watch Romney's team, the New England Patriots, play (and lose) on a Boston hotel TV screen. Romney, meanwhile, did a first quarter photo op at a Dave & Buster's sports bar in St. Louis, then missed most of the middle of the game to fly to Nashville. He caught the end at his Tennessee hotel, joining millions of anguished New Englanders in collective heartbreak. But McCain aides didn't think much of the Romney plan to skip out on the Pats midway through. "We might win this state after all," one strategist said shortly after kickoff. "I thought we were joking." (For the record, McCain was also rooting for New England; he told me Sunday night he's always liked Patriots coach Bill Belichick, whose father Steve coached at Navy for years, and made sure to tell the crowd at Faneuil Hall the same thing Monday.)

Romney claimed the trip didn't bother him, but he didn't sound too convincing. "For me, this is not about trying to tweak somebody or get in their head," he told reporters in Illinois Sunday. "This is about getting delegates and becoming the nominee ... But if he wants to spend time in Massachusetts, fine." Spokesman Kevin Madden said his boss wasn't as flustered as it seemed. "I've heard Romney annoyed," Madden said. "He didn't sound annoyed."

If hanging out in Boston means McCain wasn't pulling out extra votes in Missouri or Minnesota, that was fine with Romney's camp. Looking at polls showing that the race in California had tightened, Romney scheduled a trip to Long Beach for Monday night, prompting McCain to plan a detour to San Diego on his way from New York to Phoenix on Tuesday. Madden called the time spent in McCain's East Coast strongholds -- and in Boston -- "a strategic blunder" that could leave Romney opportunities elsewhere.

Still, the Romney staff conference calls to map out a strategy to hold on to Massachusetts couldn't have been fun. The results weren't bad, though: A bunch of protesters in Hillary and Bill Clinton masks showed up outside the McCain event carrying "Kerry-McCain" signs, poking fun at McCain over the stories from four years ago that said Kerry considered forming a bipartisan ticket against President Bush. (Kerry's concession speech to end the '04 election was in Fanueil Hall, the same place where McCain spoke Monday.)

Romney's aides were apparently concerned enough to trot out nearly the entire GOP caucus of the Massachusetts statehouse to put down the idea that McCain could win the Bay State -- and to make sure they didn't cede the daily coverage in Boston to McCain. "We have the support of virtually all the members of the Legislature," said Kerry Healey, who served as lieutenant governor with Romney. "We have the sheriffs, we have all sorts of [district attorneys] here today." But the press conference at Romney's downtown Boston national headquarters almost seemed to prove McCain's contention that the state could be close -- if you have to make the case you'll win your home state, you might be in some trouble.

"I think [McCain's trip] has helped him," said David Paleologos, the director of the Suffolk University Political Research Center, which published a poll Monday showing Romney up 50-37 over McCain. That was closer than last week's polls had the race, which might mean McCain has momentum. "It may push him into within single digits, who knows? Maybe it's a closer race and Romney wins by a few."

A close finish here might not bode well for Romney's political future. He hasn't decided whether he'll go on past Tuesday if the results aren't encouraging. His campaign hasn't bought any ads in states that vote later, though Romney is scheduled to join McCain and Mike Huckabee for speeches at a big conservative confab in D.C. on Thursday.

And if McCain does knock Romney out of the race, the other GOP contestants -- past and present -- aren't likely to miss him. In South Carolina, Huckabee aides accused Fred Thompson of staying in the race only to bleed Huckabee's support and benefit McCain; now Romney is accusing Huckabee of doing the same thing. So Huckabee spent the weekend cheerfully, but persistently, demanding that Romney quit the campaign, in response to Romney's claim that Huckabee was only serving to split the conservative (meaning anti-McCain) vote. "He suggests that I get out of the race and has the audacity to say that the reason is because the voters that I'm getting are voters that would go to him," Huckabee told CNN Monday. "I think it's incredibly presumptuous -- and even arrogant -- to suggest that the voters who are voting for me would automatically gravitate to him. I think, quite frankly, they would not." Much as McCain clearly likes rattling Romney, Huckabee may enjoy it more. He makes fun of Romney for everything from how much he's spent on the race to his allegedly effete approach to eating fried chicken.

By winning Iowa, Huckabee probably cleared the way for McCain to beat Romney in New Hampshire and Florida. Now McCain wants to finish the job that Huckabee started. "All states are important," McCain said Monday morning. "Massachusetts is a very important state. I understand the advantage that Governor Romney has here, but we'll be fighting for every state." He could be fighting longer if going for Romney's jugular here gives his rival breathing room somewhere else. But that seems to be a chance McCain is all too happy to take.