Judd Apatow's short-lived series "Undeclared" brings back the bad beer, sex-crazed roommates and geeky uncertainty of your college years. But don't chug it. 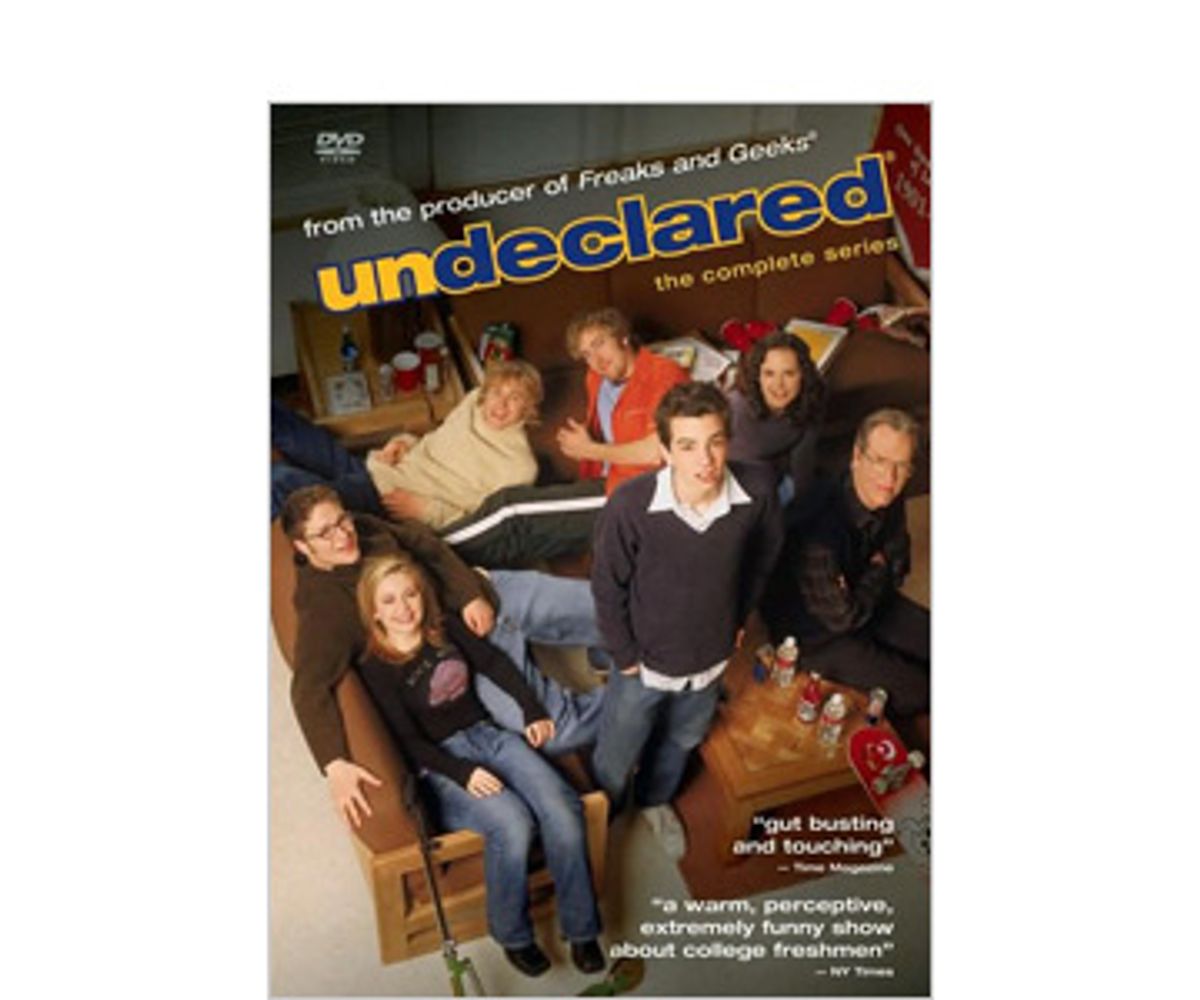 Oh, Judd Apatow, your chronicle of America's youth just flows and flows, like a recently tapped keg. Late-blooming fans of the auteur of stunted adolescence, jonesing for more after "Knocked Up" and "Superbad," should consider unearthing "Undeclared," his short-lived 2001 sitcom about the highs and humiliations of college life.

The series' 17 half-hour episodes take Steven and his buddies from standard-issue stereotypes -- in the pilot, our geeky hero rips up his "X-Files" poster as a sign of his willingness to blossom into social viability -- to nuanced, if still slightly hokey, human beings who have developed something like distinct personalities after their first year at college.

"Undeclared" is a crucial step in Apatow's apparent mission to string together a series of projects that will eventually form a time-lapse image of every conceivable stage of arrested emotional development. "Undeclared" nestles in most obviously behind "Freaks & Geeks," another much-lamented one-season wonder that cast a nostalgic, autobiographical eye on the horrors of Apatow's high school life in the 1980s.

Perhaps its historical setting is what helped make "Freaks & Geeks" more artful, precise and delicate in its unearthing of the discomforts of adolescence than "Undeclared," which was supposed to be contemporary when it aired in 2001. "Undeclared" contains what now sound like painfully dated clunkers, as when Steven's chiseled British roomie is told by his hot one-night stand, "We're just like Brad Pitt and Jennifer Aniston," and he replies with horror, "Yeah, except they're married!"

But "Undeclared" was surely a little anachronistic even six years ago; many episodes involve open beer guzzling in public dorm space, a practice that may have been common when Apatow was matriculating in the late '80s, but was strictly verboten even by the time I arrived in student housing a decade later. Now, as I understand it, even the frat houses are going dry.

The lack of chronological specificity, if you can skate over the Palm Pilot and video game references, makes "Undeclared" a lightly timeless tale about campus life, applicable to anyone who has ever heard the phrase hometown honey, found themselves sexiled, had a close encounter with the Campus Crusade for Christ or felt a little blue after a lecture on existentialism. The scene in which Steven's friends Ron (Seth Rogen) and Rachel (Monica Keena) forcibly drag a fevered, flu-ridden Marshall (Timm Sharp) to the student health center will bring back memories for anyone who has ever resisted a trip to the infirmary until he puked, literally.

Much of the Apatow stable is in place in these episodes. There's Rogen, whose wiseass slacker college freshman tellingly appears to be more mature here than his wiseass slacker 20-something from last summer's "Knocked Up." Baruchel will be familiar as one of "Knocked Up's" leg-humping, bong-hitting, pink-eye sufferers. And Carla Gallo, whose Lizzie is mesmerizingly believable as the eager girl who I believed has lived on every freshman hall in history, is the toe-sucking chick from "The 40-Year-Old Virgin."

There's a rogue's gallery's worth of cameos by Apatow friends, from Will Ferrell as a speed-freak video game addict who writes kids' term papers for them to Fred Willard as a history teacher who spices up his lectures by dressing up as Jack and Bobby Kennedy, Khrushchev and Castro. Most memorable is Amy Poehler as the spazz-tastic, randy R.A. who busts a move on hottie drama major Lloyd by making him role-play a scene in which he has to act like a young stoner girl approaching her for guidance.

In early episodes, "Undeclared" threatens to showcase the tight, angry visions of one-dimensional femininity that Apatow put on display in "Knocked Up": The frosh girls are either panic-attack balls of anxiety, giggly caricatures of wide-eyed naiveté or just kind of slutty. This is a show created by and shot from the male point of view. Apatow does not even take a stab at imagining the inner lives of these beautiful, exotic, mysterious 18-year-old creatures. But that may cut to the blinkered heart of many an 18-year-old man's perspective. And besides, the gals don't really have much of an idea of what's going on with the guys, either.

As the show matures a little, it becomes clear that in place of the vague bitterness about gender inscrutability in "Knocked Up," "Undeclared" actually has the sweetness of heart about men and women that Apatow exhibited in "The 40-Year-Old Virgin": The Brit-boy roommate is caddish but emotionally sophisticated about Steven's father's crumbling marriage; Lizzie's pathetic, mulleted, copy-shop employee hometown hottie turns out to have warmth and at least a modicum of depth. And it's not just the guys who benefit from this generosity of spirit. Wifty homeopathic medicine devotee Rachel is direct and articulate and responsible about academics; sweet-as-pie girl next door Lizzie has a healthy sexual appetite, cheerfully bedding guest star Adam Sandler, playing himself.

"Undeclared" is a sitcom, and has all the unevenness of one. Viewing it in moderation is recommended; watching the 17 episodes on the complete series DVD back to back turns up every plot imperfection, continuity error and character inconsistency.

But as a good-humored reminder of what it might have felt like to be on your own for the first time in your life, you could do far worse than to visit the beer-soaked halls of the University of North East California.