The GOP chases its tail

McCain powers toward the nomination, sort of; Huckabee surges in the South -- and Romney struggles to stay relevant. 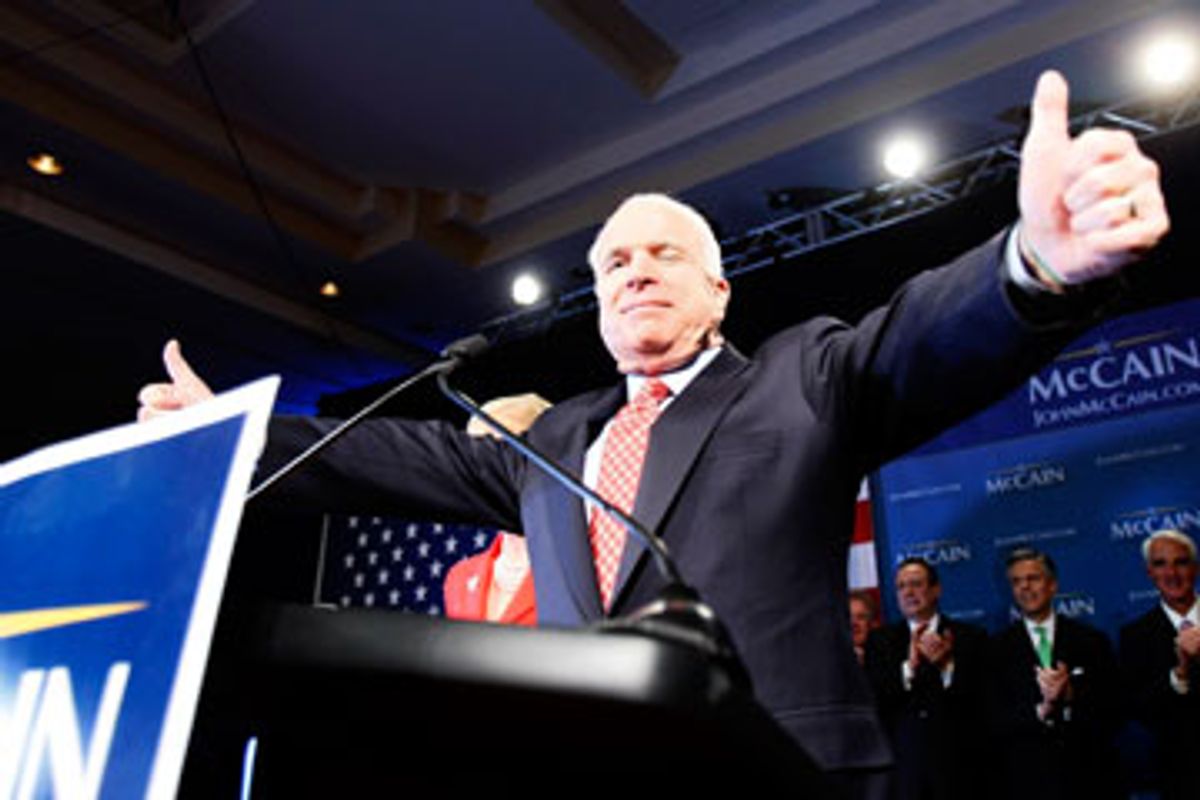 This was supposed to have been the end of the Republican presidential primary campaign. Instead, it looks like it could lurch on a while longer -- even though the final outcome seems less and less in doubt.

One thing was clear as Super Tuesday came to a close: The speechwriters had their work cut out for them. All three leading candidates delivered remarks that were not quite roars of victory, not quite sighs of defeat. John McCain won enough states and enough delegates Tuesday night to claim he had triumphed, yet not enough to get his rivals to agree with him. Mike Huckabee racked up win after win in the South, gleefully declaring his campaign relevant again, but he couldn't put together much support anywhere else. And Mitt Romney continued to mop up contests where he had no competition, while losing in states where he actually had to fight for it.

For John McCain, the night ended more or less where it began -- with him as the front-runner, but still working to unite the party and lock up the nomination. "We have a ways to go still, but we are much closer to the victory we have worked so hard to achieve," he told supporters in Phoenix. "I am confident we will get there."

He didn't quite make it Tuesday, though he won the biggest states up for grabs -- California and New York -- and beat Romney in Missouri, which they had both targeted. Throw in Arizona (his home state), New Jersey, Connecticut, Delaware, Illinois and Oklahoma, and it was a pretty good night for a guy who gambled his entire campaign on winning New Hampshire last month. Exactly how many delegates they each picked up won't be clear until some complicated counting is done. But even before the polls opened, McCain strategists were arguing that Romney was finished -- and winning the lion's share of the map will only embolden them, even if the delegate picture remains murkier.

Over the last few days, conservative activists have grown ever louder in their protests against McCain. It hasn't slowed him down, but the outcry did produce the remarkable phenomenon of the likely Republican nominee repeating over and over again that he was, indeed, a Republican -- six times in his speech Tuesday night. "I am a Republican because, like you, I believe government must defend our nation's security wisely and effectively," McCain said. "My friends, my purpose is to preserve and strengthen our freedom, the freedom I have defended all my adult life, and I will not let anyone or anything deter me." Not even Rush Limbaugh, apparently.

The surprise of the night was Huckabee, whose campaign was left for dead after he failed to beat McCain in South Carolina a few weeks ago. At a debate in California the day after the Florida primary, Huckabee had to beg for airtime, fearing relegation to the Ron Paul zone. But after the results started rolling in Tuesday, Huckabee was ready to send Romney there. "Over the past few days, a lot of people have been trying to say that this is a two-man race," Huckabee said in Little Rock, Ark. "Well, you know what? It is. And we're in it!"

Huckabee started the day off stealing West Virginia from Romney, with an assist from McCain's strategists, who threw the state convention to Huckabee when they saw that they could stop Romney from winning there. (Romney aides grumbled about facing a tag-team effort from the other two.) And Huckabee ended Tuesday by winning his home state of Arkansas and most of those nearby -- Alabama, Georgia and Tennessee.

Huckabee's wins -- and Romney's handful of third-place finishes -- made it difficult for Romney aides here in Boston to keep up their spin: that Huckabee was out of the race and that Romney was the clear conservative alternative to McCain. But that didn't mean they couldn't try. "McCain has shown that he woefully underperformed," said Kevin Madden, a Romney spokesman. It wasn't clear exactly what that meant -- Romney, not McCain, lost states (like West Virginia) that he had expected to carry.

By the time he addressed his cheering supporters here, Romney had won only Massachusetts (where he's lived for 30 years and served as governor) and Utah (where he turned around the Olympics and shares many voters' Mormon faith). Later, he picked up North Dakota, Colorado, Montana and Minnesota -- all caucus states where he put more resources into organizing than his rivals did.

Don't tell Romney he had a disappointing night, though. "One thing that's clear is this campaign is going on," he said. "We're going to keep on battling. We're going to go all the way to the convention, we're going to win this thing, and we're going to get into the White House." Aides will gather to run through the delegate counts Wednesday, but Romney didn't sound as if he could be talked out of going forward.

Each time Romney loses a race, he seems to switch messages. The Romney who spoke in Boston was yet another variation; he's morphed into a populist outsider since slipping into the underdog role. "It's time for the politicians to leave Washington and for we, the people, to take over," he shouted Tuesday night. What such an insurgency led by an ace management consultant would look like is hard to say. But Romney may not have the chance to show us anytime soon.

Indeed, there doesn't seem to be much chance for Romney to overtake McCain in the remaining states if Huckabee stays in to split the conservative vote. And Huckabee, who likes McCain and seems to resent Romney, has little incentive to drop out to clear the field. He made that obvious enough Tuesday night. "I think Mitt Romney is an outstanding businessman, is a good person," Huckabee told C-SPAN. "I think he's run his campaign, frankly, with a lot of animosity toward his fellow Republicans. Sometimes it's been a rather ruthless approach and attacking us, not necessarily with the facts." By the time the campaign is over, Romney may wish he hadn't run quite so many of those "contrast ads" in Iowa and New Hampshire -- and not just because of the $35 million of his personal fortune he spent doing it.