The GOP front-runner celebrates before a crowd used to seeing him make comebacks. 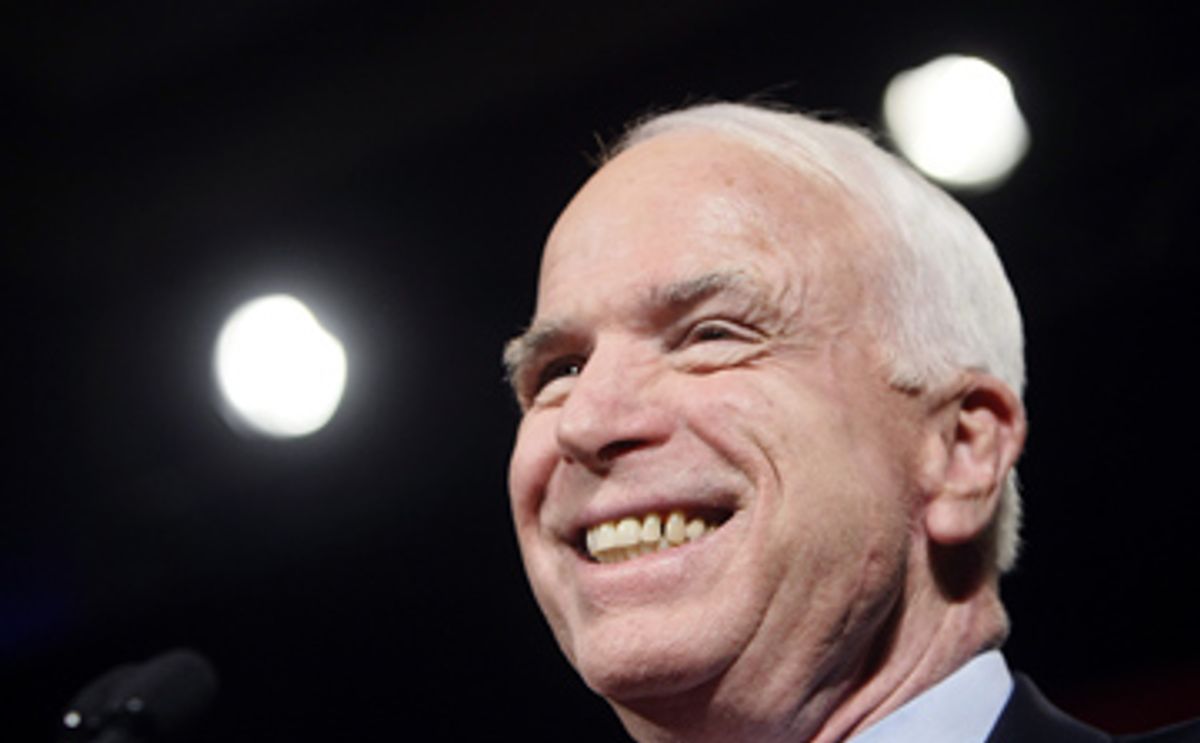 Where in the heck is the foot soldier in the Reagan revolution?

Where is the guy who will follow Osama bin Laden to the gates of hell?

It's 9:35 p.m. on Super Tuesday, and John McCain is half an hour late to give his victory speech at the Arizona Biltmore Hotel. The crowd of several hundred old and young, decidedly middle-class voters is getting restless. Some have been milling around the ballroom floor for two hours, and they've consumed buckets of chips and salsa; the air is infused with garlic. The press corps seems to have commandeered all the chairs, and some of the oldsters don't know how much longer they can hold out. Others in the crowd seem a little surprised that their guy appears to be winning, and they discuss what they perceive to be his strong points -- straight talk, toughness, victory in Iraq, fiscal conservatism, a reasonable immigration policy, promises to nominate tough judges.

Then, at about 9:36 p.m., Sen. John McCain steps onto the stage, thumbs up, smiling, with his wife, Cindy. The crowd whoops and roars. McCain's red tie matches Cindy's red suit. He thanks his wife for her support, and Cindy tears up. She steps back with the other dignitaries, including Sen. Joe Lieberman, Sen. Lindsey Graham and Roberta McCain, the candidate's nonagenarian mother, as they applaud.

After all, this is an unexpected victory. McCain is projected to win eight states at this moment, which almost ensures that he'll be the Republican Party's presidential candidate in November. McCain overcame an impoverished campaign chest, bleak early polling numbers, an unenthusiastic, sometimes downright hostile conservative Republican base, Rush Limbaugh, and Mitt Romney to become the party's probable presidential nominee.

"We are the captains of our fate," he says.

"We can overcome any challenge," he says.

McCain's on a roll. Whether those in the party's conservative base, who are particularly distressed over McCain's stance on immigration -- they say he favors amnesty for millions of undocumented immigrants already here, and his supporters say he favors a "controlled pathway to citizenship" -- will swallow their pride and support McCain simply because he's, well, on an electability surge, remains to be seen. With his strong following of independent voters, McCain may not need that fringe to win the nomination. But he extends an olive branch to the neocons anyway, vowing to reach out to them because he believes in their principles. He also marks his territory, saying he looks forward to "leading" the Republican Party.

In Arizona, 28 percent of voters are registered independents, and they've helped send McCain to the Senate. Now a growing national electorate of independents may give McCain a shot at the White House.

"We will reject appeals of retreat and timidity ... we will keep America safe," McCain says, alluding to the cornerstone of his campaign -- national security, a victorious Iraq war and the success of the surge. Then he stumbles a tiny bit when he walks off the stage and into the crowd of well-wishers. After all, he's 71 years old and has just completed a marathon coast-to-coast campaign stump.

Anyone who has lived in Arizona for a long time knows McCain has staying power. His 1980 marriage to Cindy Hensley, the daughter of a wealthy Phoenix beer distributor, catapulted him into political prominence in Arizona. He was elected senator in 1987, and hasn't looked back since, despite the fact that he was investigated by the Senate Ethics Committee in 1990 for his role in the Keating Five scandal, which involved McCain and four other senators meeting with regulators investigating the failed savings-and-loan empire of his financier friend Charles Keating. He didn't look back when Cindy confessed to a drug addiction (she's over it), and he didn't look back when he underwent surgery for a particularly nasty melanoma. Nor did he look back when he lost a bid for the 2000 presidential nomination. He just soldiered on.

McCain's Arizona supporters don't worry too much that their man has alienated the Republican base, and he has rarely had the support of neocons in the state anyway. Bob Thrasher, a 39-year-old real estate attorney, described himself as a "Goldwater Republican," which is how he views McCain.

"Of all candidates on the ballot McCain is the closest to Goldwater," he says.

State Rep. Doug Clark, hopes that neocons running the Republican Party in Arizona will "bury the hatchet and throw everything behind McCain," even if McCain doesn't really need them to win. And maybe that trend will extend across the nation, he says.

By 10:30 p.m., the McCains have vanished, the Arizona Biltmore ballroom is rapidly emptying. Before midnight Arizona's maverick is projected to win delegate-rich California and is well on his way to the presidential nomination.