Barack Obama celebrated his heartland victories back home in Illinois, where seldom was heard a word of Hillary Clinton's coastal triumphs. 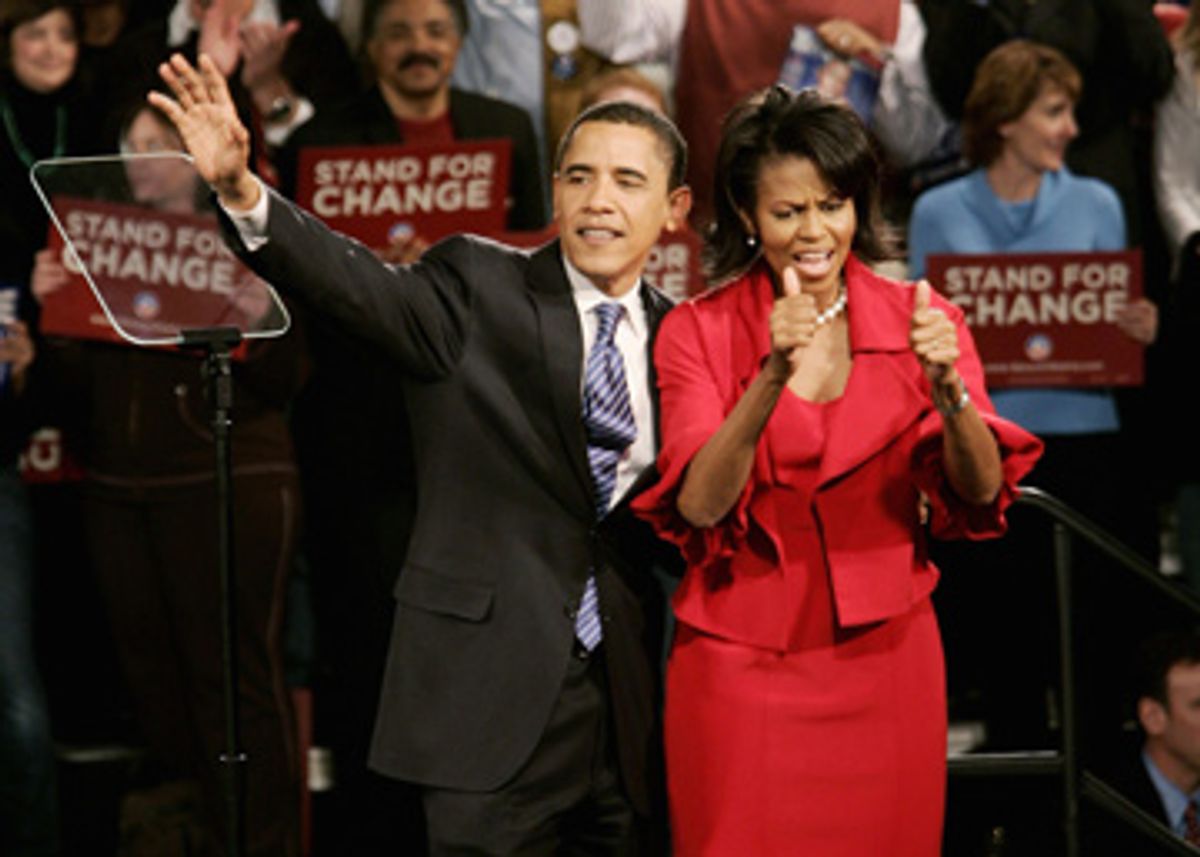 It's a collection of states perfectly suited to Barack Obama's Saturday Evening Post evocation of America. From the frozen tundras of Alaska to the snow-capped mountains of Colorado, from the loamy potato patches of Idaho to the windswept shores of Delaware, Obama may not have won prized states on Super Tuesday, but he won a wide swath of America, proving, he said, that he's the best man to bring the country together.

"The polls are still closing in California," Obama declared at an election-night rally in a downtown Chicago hotel ballroom. "The votes are still being counted in cities and towns across America, but there is one thing on this February night that we do not need the full results to know: Our time has come, our movement is real, and change is coming to America."

Obama was as fired up as usual, his confidence in full bloom. Hillary Clinton had claimed a bounty of delegates in Massachusetts and California, but Obama remained in a victorious mood. "From the hills of New Hampshire to the deserts of Nevada, cooks and teachers stood up to say, 'Maybe we don't need a Washington that's run by lobbyists,'" he said, the crowd cheering. "'Maybe we don't need crumbling schools stealing the future of black children.' What began as a whisper in Springfield has swelled into a chorus of millions calling for change."

While Clinton took urban blue states New York and New Jersey, Obama made a point of campaigning on enemy territory, touching down in Idaho and Kansas, two states that no Democrat has won since 1964. Obama took them both on Tuesday. As CNN broadcast his victories in the ballroom, the crowd erupted for even the smallest state. Out in the hallway, a Chicago alderman was giving an interview, when he was interrupted by tumult from the ballroom. "Obama just won North Dakota," he was informed. The alderman pumped his arm. Obama is "a breath of fresh air, not just for Chicago, but for all America," he said.

Throughout the night, a video screen played Obama's celebrated "Yes We Can" video, starring the Black Eyed Peas' will.i.am, John Legend, Scarlett Johansson, Common and Kate Walsh. Steve Kroft, looking even more deeply cragged than he does on "60 Minutes," sat near the stage, watching Obama's every move. After the speech, author and Princeton professor Cornel West held court in a doorway. Just the day before, he had called into the "Trey Da Choklit Jok Morning Jump Off," Chicago's most popular urban radio station, to promote Obama for president.

Jesse Jackson was there, too, acknowledging that Obama has created a rainbow coalition beyond anything Jackson himself achieved during his presidential runs in 1984 and 1988. "He won white male voters in Minnesota and North Dakota," Jackson said. "It's a message that is penetrating across ancient lines." Jackson believes Obama will be in the race until the Democratic Convention in Denver. "This was supposed to be the end of the campaign today," he said. "Georgia heard him, Connecticut heard him. I just left India and London. This is the campaign of the century. I've not seen this much excitement since Mandela was released from jail."

That was his appeal to Alissa McCurley, a 28-year-old law student who grew up conservative in Kansas, voted twice for Bush, but was, like many Republicans, feeling herself pulled toward Obama's world of bipartisanship. "I've never voted for a Democrat, but I'm absolutely open to Obama," McCurley said. "I truly believe that he is the only Democrat I've ever trusted. Even given his liberal ideas, he would put what is best for America at the forefront."

McCurley voted for Obama in the Democratic primary, but wants to hear more specifics and fewer platitudes before closing the deal in November. Obama's crowds love to chant "Yes, we can," but they never finish the sentence. "I don't think he's very specific," McCurley said. "Clinton and McCain are very platform-oriented. Obama is just 'I want change,' and beauty and truth and rainbows."

That's been enough to keep him in a race that Clinton once predicted would be over by Feb. 6. In his post-game press spin, Obama's campaign manager, David Axelrod, said that Obama, facing a telescoped schedule designed to benefit Clinton, had closed a 20-point gap, and has the resources to carry on all the way to Denver. "What was once inevitable is no longer inevitable," he said. "What was once a lopsided race is now a close contest, and the momentum has shifted."