"In Bruges" and "The Band's Visit" 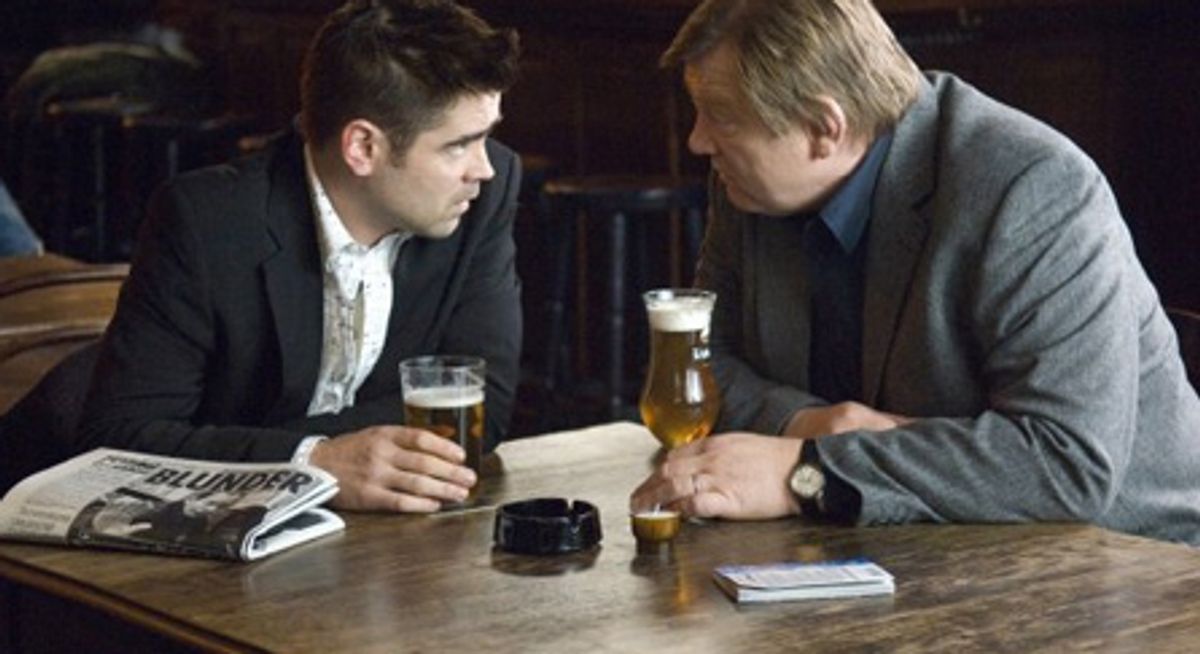 Colin Farrell and Brendan Gleeson in "In Bruges"

We're still running on a wing and a prayer over here at the temporary West Coast HQ of Beyond the Multiplex, battling a winter flu bug and some family blues, but there are a couple of new movies this week I didn't want to let slip past unnoticed. "In Bruges," the dark, hilarious and oddly moving writing-directing debut of Irish-British playwright Martin McDonagh, opens in major cities on Friday. It was the opening-night film at Sundance this year, and you can read my review here.

I had mixed feelings about "In Bruges" right after seeing it, and it's definitely not to everyone's taste, but the most interesting pictures never are. There's a certain instability, or even derangement, about this story of two Irish hit men (played, marvelously, by Colin Farrell and Brendan Gleeson) on an enforced vacation in the medieval Belgian city of the title. Despite its scabrous, gutter-poetry dialogue and elements of Tarantino-style grotesque, "In Bruges" is also a fable about morality, self-sacrifice and religious doubt.

In a much milder vein, this week also brings us "The Band's Visit," from Israeli filmmaker Eran Kolirin, which I covered in December, when it was released in anticipation of a possible foreign-language Oscar nomination. By that time, in fact, it had already been disqualified by the Academy on the grounds that much of its dialogue is in English, which marks an especially dramatic example of Oscar authorities missing the point. Kolirin's film is based on the true story of an Egyptian police band stranded in a remote Israeli desert village; strained and imperfect English is the only language the Arabic-speaking musicians and their accidental Hebrew-speaking hosts have in common.

It appears that many critics saw "The Band's Visit" as overly sentimental. I don't care. The film's episodic gentleness, I would say, is deceptive. And its lovely, understated central storyline -- which arguably ought to be more central than it is -- about the thwarted romance between a sexy Israeli divorcee (Ronit Elkabetz) and a courtly Egyptian widower (Sasson Gabai) encompasses all the human tragedy of the Arab-Israeli conflict with nary a reference to violence or political strife.

I'm deeply sorry to have missed Paris Hilton's star turn in "The Hottie and the Nottie" (also this week), which I'm confident will put to rest any notion that her celebrity is undeserved. Other openings this week include the British thriller "London to Brighton," Vince Vaughn's concert-tour doc "Wild West Comedy Show" and the reportedly devastating documentary "A Walk to Beautiful," about a group of African women struggling to find treatment for birth-related injuries that have made them outcasts in their own communities. I'll update those further if I get a chance, and the blog should be back to normal next week.