Clinton's popularity with Latino voters reminds us that people of color do not walk in lock step. There's a lesson here for Obama. 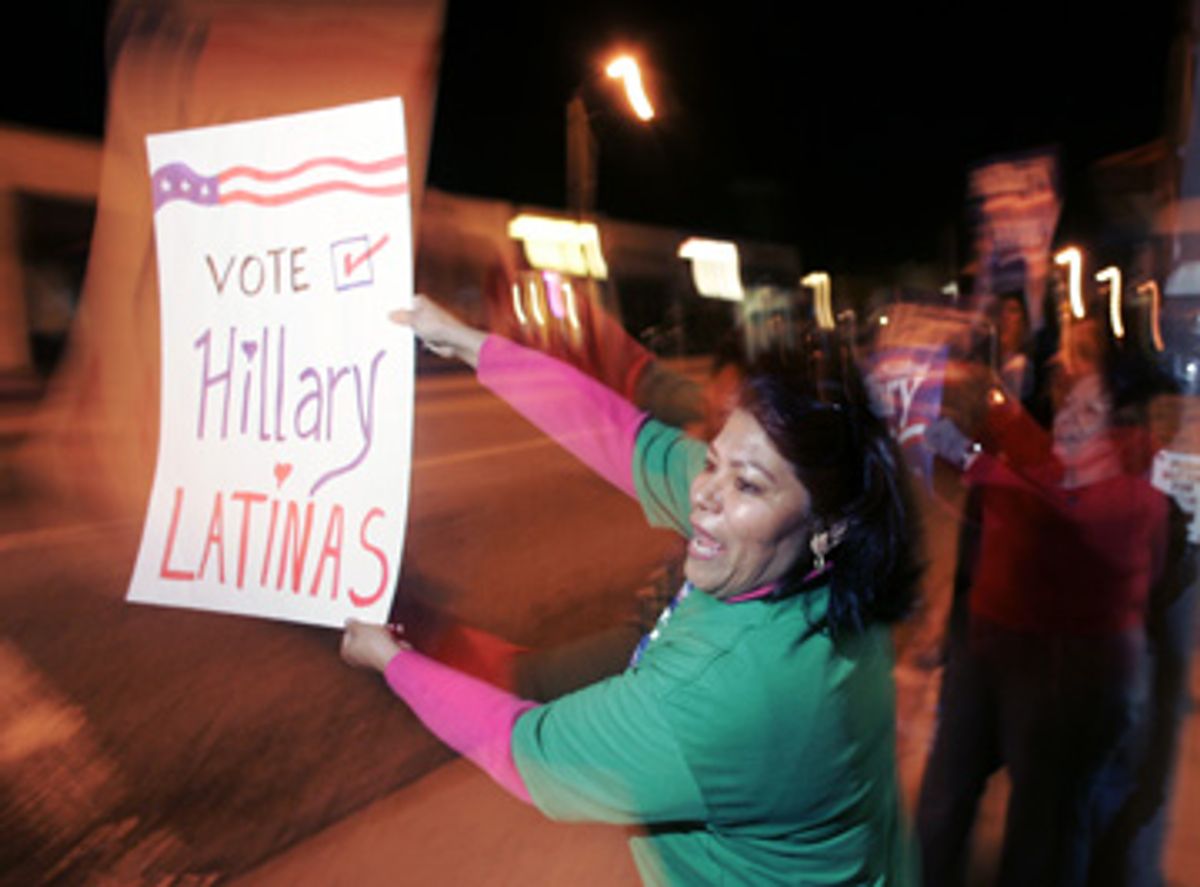 For a generation, the cultural and political left has, to its credit, forced institutional America to acknowledge complexity -- the nation's many colors and sexualities and ethnicities. The trouble with the left's sense of complexity was that it was dumped into a nondescript drum labeled "diversity," a word that meant less and less the more that it was used.

The immediate conclusion drawn by political analysts from Super Tuesday's big headline, "Hillary Clinton Wins Latino Votes," was that Hispanics refused to support an African-American candidate, and that all is not well among "people of color" (another cheap term from the multicultural dictionary).

In fact, people of color do not walk in lock step, are not necessarily united in their goals by their tincture or free from competition with each other. In fact, Hispanics, particularly immigrants -- legally or illegally here -- often find themselves, as newcomers, in fierce competition with working-class blacks and whites at the meat plant hiring office.

The cynic will say that Hillary Clinton has detected tension in the brown-black relationship and exploited it, at a time when her rival is an African-American with vast support from black America. More accurately, I think Clinton has punctured the easy generality of a term like people of color.

Bill Clinton was famously anointed our "first African-American president" by Toni Morrison. But after his recent demeaning comments about the African-American vote for Barack Obama, I think it more likely that Hillary could end up as our first Latina president.

Our first Latina in chief, for more reasons than one: Hillary Clinton is reaping the benefits of a widespread Hispanic defection from a xenophobic Republican Party, the result of the GOP's inability to distinguish the kid crossing the border to pick apples from a terrorist.

But remember also that Clinton won two-thirds of the Hispanic women's, or Latinas', vote. So the question her opponent should ponder is whether Latinas were voting as women, rather than as Hispanics ambivalent toward blacks?

Or, to put the matter more bluntly: Can a person in one demographic box also belong within another? Yes, Latina women, for example, may also vote for Hillary out of feminist allegiance. And Latino men may support her, too, although perhaps for slightly different reasons.

In the end, Hillary Clinton did only slightly less well among Latinos than Latinas. The stereotype of Latino men is that, like bright, feathered birds, they are apt to shy away from strong women. But my own stereotypical view is that Latino culture is matriarchal and machismo is less a confident strut than a reflection of male insecurity. Which Latino voter had not met her type before -- the strong mother, the persevering wife, particularly the wife who withstands the humiliations of a sexually immature husband?

What, then, to say about Barack Obama -- the son of a mother from Kansas and a father from Kenya?

His biography is a case study in the ways that diversity can exist within diversity. To his credit, Obama has taken from his childhood in Indonesia and Hawaii, has learned from his experience of his father's Muslim faith and his mother's Christianity, has the wisdom of being able to unite disparate populations and cultures in a single life.

Obama has been anxious to prove to African-Americans that he is one of them. And white liberals are content to see him as nothing more or less than that -- "America's first serious black candidate for president."

Most Hispanics in the United States are mestizos -- a racial mix of European, African and New World Indian. Most Hispanics would understand Barack Obama if he came to us, not as an African-American but, like us, as a person of confused bloodlines.

For the moment, Hillary Clinton's advantage is that she promises mothers and wives universal healthcare and improved educational opportunities. What she shrewdly sees is that Hispanics are more than an ethnicity, they are also a gender.