"Project Runway" designers march their designs -- feathers! fringe! Oprah-worthy pronouncements -- down the catwalk at Fashion Week. Who will take the prize? 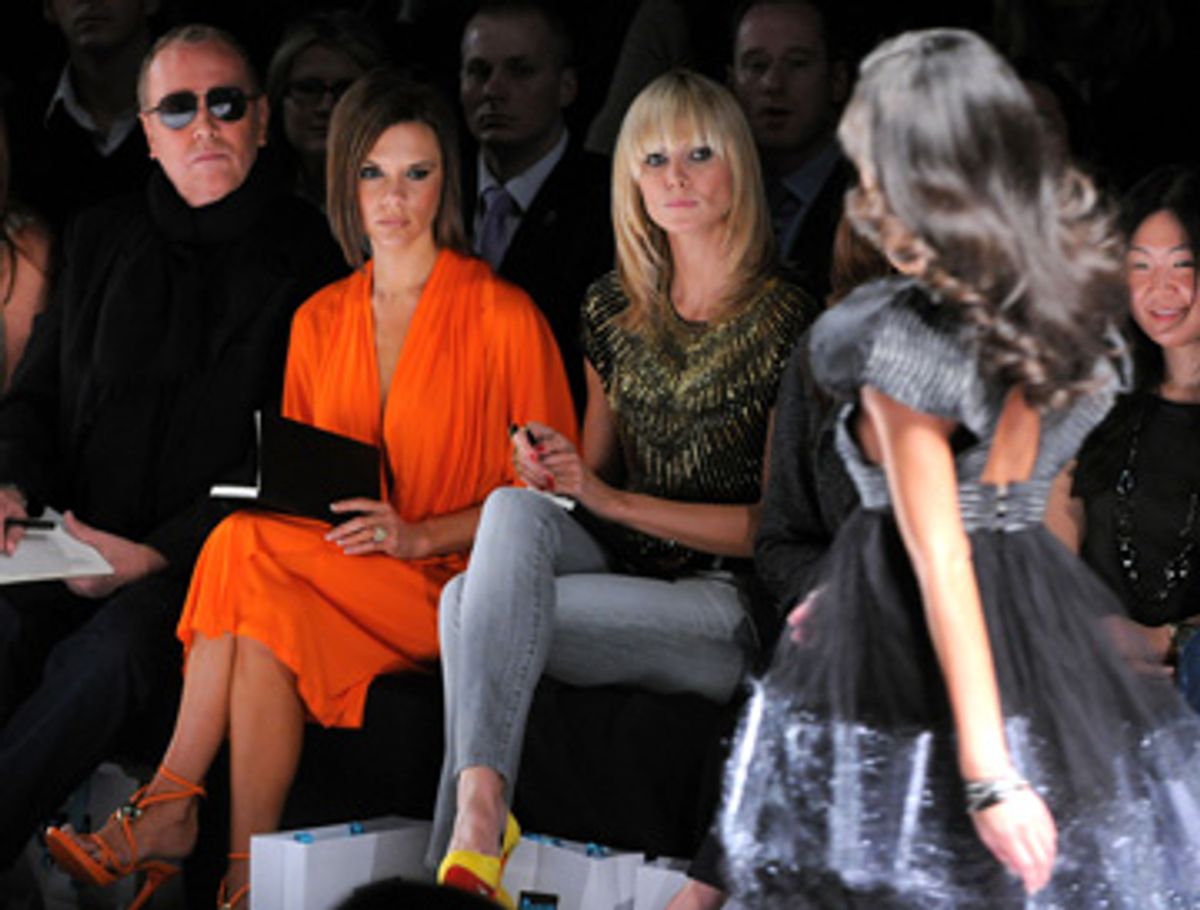 "Super-fast hearts are beating back dere," said ice-queen Heidi Klum, She-Wolf of the Best Dressed, at the start of Fashion Week's showdown between "Project Runway's" final contestants on Friday morning. Wearing her signature Jordache jeans, she came down the catwalk with ironed hair and a gold sequined top, and delivered curt information in that clipped, straightforward, German-California accent that sounds like she graduated from the Arnold Schwarzenegger School of Broadcast Journalism.

Five finalists (or so we assume; in previous seasons the show has faked out viewers by including designers who are not in contention for the prize) sent their designs down the runway: Kathleen "Sweet P" Vaughn, Chris March, Jillian Lewis, Rami Kashou and Christian Siriano. They were made to walk out alone with a microphone on the big empty catwalk before their collections, and say a little earnest something. This had to be difficult early in the morning, in a tentful of half-caffeinated New Yorkers on the last leg of a grueling Fashion Week. It was way too early in the morning for anyone to successfully conceal their true feelings.

Surprise guest-judge Victoria "Posh Spice" Beckham had been milling around on the catwalk before the show, wearing a fetching belted dress in orange silk that was short but relatively understated, for her. Harvey Weinstein, apparently, was also in the house, but invisible, and probably separated from everyone else by black baffle-sheets of bulletproof velvet.

The woman calling herself Sweet P was thrown to the lions first.

She was very nervous, very humble. She offered a heartfelt "I'd like to thank Bravo and my friends and family" mini-acceptance speech.

Her designs weren't bad, and were, in fact, better than a lot of the successful designers' offerings I had seen this week. She featured glitter knits in shades of raspberry, and an ocher satin (that I personally thought had too much of the wrong kind of green in it to clash comfortably with the pinks). There were Georgie Girl variations on the tam-o'-shanter; some nice chevron prints, and a few stodgy woolen forays into puce. The only time Sweet P really went off the rails, in my opinion, was with a pair of clownlike Bay City Rollers pants, worn with Kelly green gloves and a horrible tie-dyed silk hippie blouse.

The audience gave her a nice clap at the end that was very A for effort. It was clear they thought she was very sweet, but that nobody thinks this chubby girl with tattoos is actually going to win. It seemed like she had been the warm-up act, the appetizer course. Something to get the taste buds moving.

Next up was crowd favorite Chris March, a roly-poly sweetheart of a guy who enjoyed a whoop of great love from the audience when he trotted out. Chris waxed philosophical about how "living his life, one day at a time" had somehow miraculously led to the fashion tent -- a dream come true, in other words.

The audience was glad for him, and rewarded him by bursting into spontaneous aaaaahs and applause at the sight of his first dress: a sheer, floating violet high-neck halter-gown in weightless silk. It was backless and beautifully draped with a dark blue spray of a pattern, which looked smoky and romantic on the model's dark skin ... and yet very wearable.

Chris' subsequent designs had an unfortunate tendency toward black and red crushed velvet, and versions of dark gold cowgirl fringe long enough to verge on flapper fringe. The fringe evolved into long, wispy fans of faux monkey-fur as detail on lapels and collars -- popular back in the 1940s when nobody cared what chimps thought.

The big thesis/antithesis/synthesis of Chris' show was, in essence, Cow-Flapper of the Harlem Jazz Rodeo. Still, it was quite well received by the audience, who seemed ready to forgive Chris anything. He has won their hearts and minds, if not their eyes.

Next up was Jillian Lewis. Her television persona comes off as bored, a little snobbish, a tad cold and a little bit too rich. She seems a little too "over it," or too "in it but not of it." She is not one with the people; she sounds distant and unwelcoming, even when talking about her "passion" and "inspiration" (which seemed like buzzwords someone told her to say in order to emotionally connect with the audience).

While the Fashion Week audience was more than willing to acknowledge her talent, it seemed they just didn't like her personality very much, making her the Hillary Clinton of "Project Runway."

Her collection resembled a museum tour of equestrian looks throughout the ages, replete with Prussian cavalry helmets, and a combat-ready, swishy French revolution trench coat that could have been worn by Adam Ant in the mid-1980s. There were a few dramatically plunging necklines, but by and large, the audience, while appreciative, was unmoved. They barely clapped at the end.

Next was handsome designer Rami Kashou, who was very intent on conveying to the audience how much he celebrates and adores women (i.e., most of the viewing audience) and how women "should be cherished every day." Perhaps he is grooming himself for the Oprah couch.

Rami, if we are to go by the audience's dubious reaction, will also not win "Project Runway" due to his not-quite-charming-enough personality. But he is a designer of outstanding skill. Some of his creations were dizzying flights of gulag labor: pin tucks upon pin tucks upon chevrons upon ruffles; royal wedding cakes of incredibly exhaustive and demanding and even cruel detail. They were quite beautiful -- even the Alexander McQueen-esque, Victorian corset dress, the train of which looked like a throw rug of black vinyl postage stamps, or perhaps one of those heavy, car-wash, monster-pelt drapes that massages the soap into your windshield.

Last was Christian, perhaps the most controversial of the "Runway" finalists.

Christian "Fierce" Siriano seemed to be having a marvelously good time. The audience didn't want to love him -- he's an awful bitch -- but they couldn't help themselves. He's got the magic, and everyone knows it. He simply is a designer, while all the others are aspiring designers. It is clear that Christian was one of those colorful little boys who loved to lip-sync to Mariah Carey singles in front of the mirror, and has been a peer of Karl Lagerfeld -- at least in his own mind -- since he was about 4 years old. He's barely much older now.

The collection featured a few stunningly huge hats. The dresses were big bouffy tulle shapes, like huge belted tea-roses, and a series of feathery dresses I took to calling the Big Bird Collection, in which Christian had seamlessly fused inspirations from both John Galliano and "Sesame Street." The colors were very simple -- black, brown, ivory -- the designs were just crazy enough, just accessible enough. Mainly, though, Christian just owns the catwalk. He is incredibly confident that this is, in fact, who he is. He doesn't care if the audience likes him or not, and he doesn't need to: He doesn't need your permission to be a designer, Heidi Klum's permission, nor anyone else's.

It will be interesting to see how the judges respond to these collections, and ultimately, whom they anoint. I am curious as to how much this season's choice will be made on measurable skills as a designer, and how much it will be about how likable the contestants are -- how much will be about the winner having the personal magnetism to make people believe he or she is a designer. Who will be in? Who will be out? And who will end up on Oprah's couch?