It's a vegan manifesto masquerading as a diet fad. But the only thing this weight-loss book will help you lose is self-esteem. 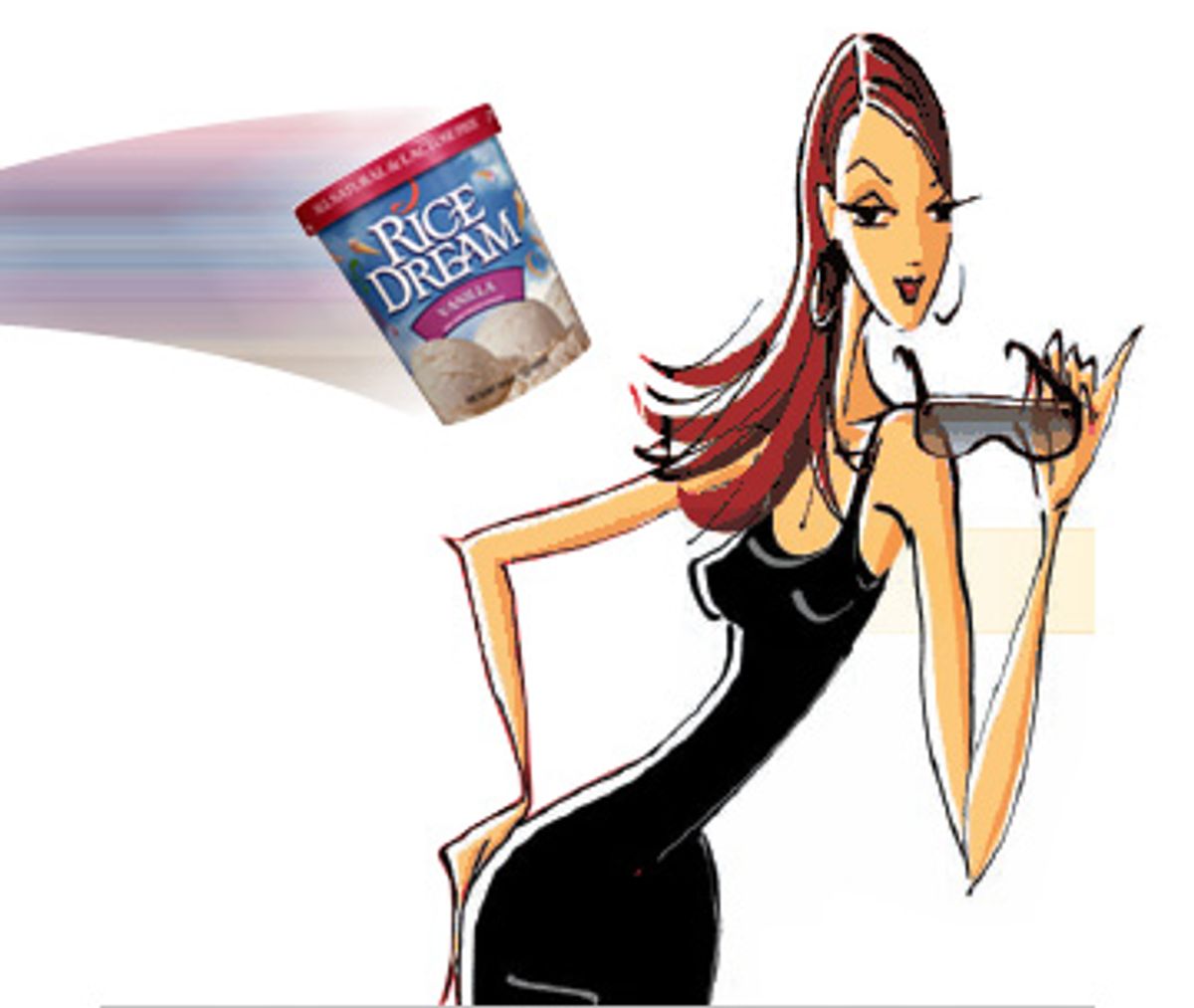 The bestselling diet book provocatively titled "Skinny Bitch" features on its cover a line drawing of a lithe fashionista in a little black dress. Also on its cover is a pitch to "savvy girls" to "stop eating crap and start looking fabulous!" Nowhere on the outside of the book, however, does the copy suggest its agenda to make vegans of women seeking tiny butts; that's just a sneaky surprise. Rory Freedman and Kim Barnouin, the authors of "Skinny Bitch" and its recently released follow-up cookbook, "Skinny Bitch in the Kitch," have surpassed Jessica Seinfeld's broccoli-spiked brownies to create the bait-and-switch diet book of the year. This book is a PETA pamphlet in chick-lit clothing and an innovative fusion of animal rights activism with punitive dieting tactics that prey on women's insecurities about their bodies.

The "Skinny Bitch" empire has proven so popular, in fact, that soon men will be part of the franchise, with Freedman and Barnouin's guy-targeted sequel, "Skinny Bastard," slated for release in 2009 (no word on whether Vincent Gallo will be the cover model).

Veganism -- the practice of shunning not only meat but also foods that contain any animal products, like milk, eggs and honey -- has been enjoying a boom. In part that's due to increasing awareness of antibiotics and hormones used to treat food animals as well as the green movement sparking concern about the smaller carbon footprint of tofu compared to steak. But it was a photograph of pop star Victoria Beckham, aka Posh Spice, holding a copy of the 2005 title "Skinny Bitch" that jettisoned the book sales to bestseller status. There's no proof that Posh, who's admitted to never having read a book in her life, broke her record by cracking this one; I imagine the classification of soda as "liquid satan" from Freedman and Barnouin would be hard to reconcile with Beckham's claim that she only drinks Diet Coke, because she hates the taste of water.

Dieters hoping the authors of "Skinny Bitch" have more nutritional savvy than Posh might be more comforted by the jacket photo of Freedman and Barnouin looking lean, rather than their food science credentials. Barnouin left her modeling career to get a degree in holistic nutrition at what the New York Times called, in deadpan, an "unaccredited school for alternative health," and Freedman, a former modeling agent, describes herself as a "self-taught know-it-all" in her bio.

Many women, hoping to get saucy advice from two stunners about staying slim, have felt duped by the offerings of what the authors proudly tout as a "manifesto." Aspiring Bergdorf blondes buy copies of "Skinny Bitch" at L.A. boutiques, only to be blindsided with accounts of live cows skinned alive on the assembly line. At least when a Hare Krishna gives you a vegetarian cookbook in the airport, you know -- thanks to their flower-wielding characterizations in Zucker brothers movies -- that they are cultish wack jobs. But Barnouin and Freedman, under the ruse of weight loss expertise, alternate concern for animal abuse with reader abuse.

The relentless bullying peppered throughout the authors' advice accounts for much of the book's humor, including quips like "you need to exercise, you lazy shit," "coffee is for pussies" and "don't be a fat pig anymore." It was a formerly anorexic friend of mine who nailed it when she read excerpts from the book. "When you have an eating disorder," she told me, "that's the voice you hear in your head all the time."

Thanks to "Skinny Bitch," women who hate their bodies no longer need rely on their own self-loathing to stoke the flames of what seems like motivation but is actually self-flagellation -- penance for the sin of being too fat. Now dieters can have the convenience of a former model (Barnouin) and a former modeling agent (Freedman) putting their transgressions in the black-and-white terms of right and wrong. "If you eat crap," they chirp, "you are crap."

It's a heavily agenda'd method of preying on the dieter, whose mind is weak from starvation and preoccupation with nothing but food. Have you tried to hold a conversation with somebody on a diet? The first 10 pounds they lose are mostly brain. Christian diet books like Gwen Shamblin's "Weigh Down Diet" and "What Would Jesus Eat?" (a real cookbook by Don Colbert, no relation to the comedian) sell copies based on the same reasoning.

There are good intentions behind many people's conversion to veganism, including an admirable devotion to the well-being of animals and a justified skepticism about the crap the USDA allows manufacturers to put in our food. But it's hard to ignore the often sanctimonious nature of what some nutritionists view as an "extremist" way of eating.

If you go off the "Skinny Bitch" "diet" and eat a scoop of ice cream instead of a Rice Dream frozen dessert, not only are you off-track, you're morally abhorrent. You're contributing to cruelty against animals, you fat piece of shit. And Freedman and Barnouin don't seem to mind whether the frozen dessert has more calories or more ingredients with unpronounceable chemical suffixes than the real thing.

In fact, toward the end of the book, the authors of "Skinny Bitch" admit that teaching you how to be skinny isn't their concern. They list their favorite vegan junk food, which they promise you can find if you "drag your cankles to a health food store." They mischievously confide that they gave their book its title just to sell copies, which is why there are zero references to their veganism on the cover as well. (They're deceptive, not stupid: They know that veganism sells hacky sacks, not blockbuster paperbacks.) In other words, these women don't seem to have any viable weight loss advice beyond offering unsustainable daily menus of less than 1,000 calories a day and advising you to repeat Deepak Chopra mantras that assure you, "Every day in every way, [your] ass is getting smaller." They wrote this book to let you know how disgusting eggs are, and how shitty you are to want a piece of fish.

There are more salient ways to learn how to eat healthy for those who wish to slim down while avoiding animal products. Nobody will call you a pussy in a Weight Watchers meeting, where vegans can thrive on-program next to carnivores. And Michael Pollan's superb chapter on the ethics of eating animals in his blockbuster "Omnivore's Dilemma" offers a thoughtful meditation on the alternatives to killing for calories.

As far as Freedman and Barnouin are concerned, however, there is no wrong way to get girls to "go veegs," even if it does require a little bit of sneaky marketing and the kind of hate-fueled body criticism they learned from the modeling industry back in the day. And just as Freedman can't "wrap [her] mind around" women who "spent $14 on a book that was not what they thought, but [who aren't] mad that chickens are having beaks chopped off their faces," it's tough to reconcile the terms "cruelty-free" with women who seem dead-set on remaking scores of dieting women in their own image -- as the skinniest, nastiest bitches around.