As Clinton and Obama spoke to Virginia Democrats on Saturday, the crowd's response -- and returns from Nebraska, Washington and Louisiana -- showed how the tide is turning. 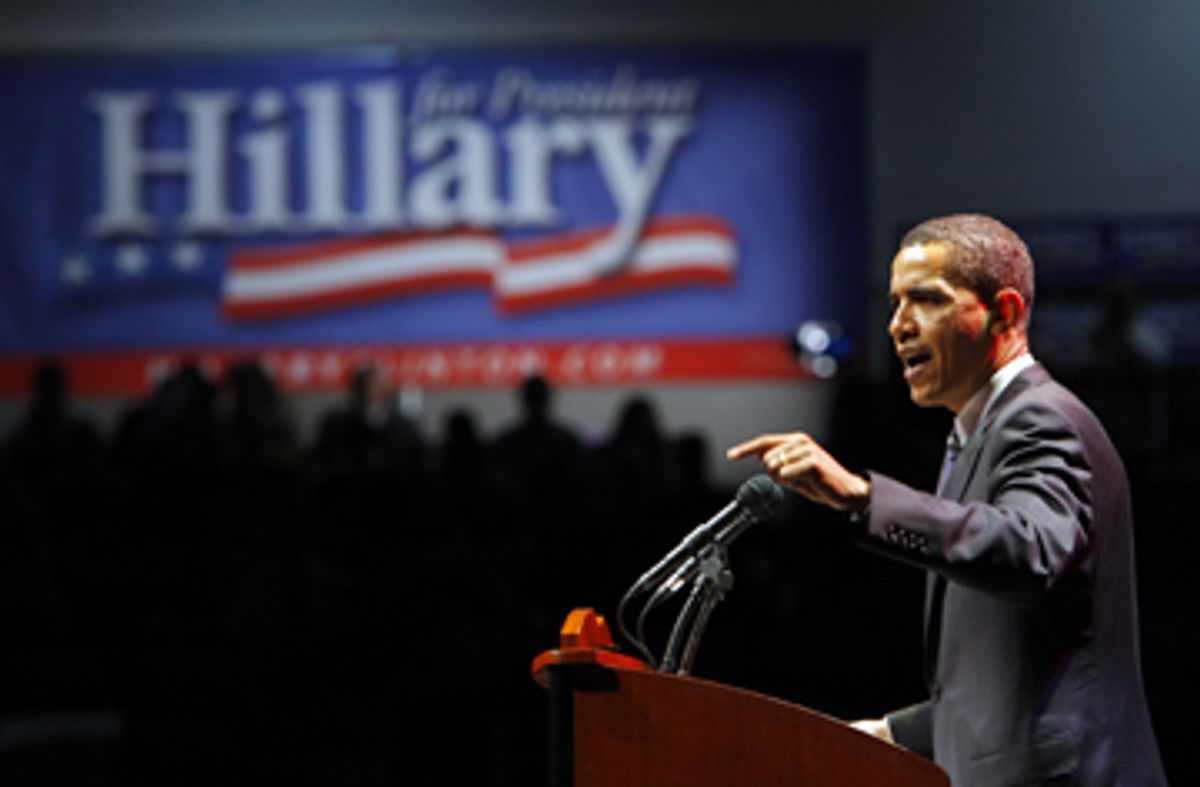 February is suddenly turning into the longest and the cruelest month for Hillary Clinton. She tried to put a brave and indomitable face on it Saturday night as she shared a stage (separated by 90 minutes on the program) with Barack Obama at the Virginia Democratic Party's Jefferson-Jackson dinner. "If I am your nominee," she declared on a night that raised new questions about that possibility, "you will never have to worry that I will be knocked out of the ring because I do have the strength and experience to lead this country. I am ready to go toe-to-toe with Senator McCain whenever and wherever he desires."

Even before she spoke to the more than 5,000 Democrats -- and the galleries had amused themselves as they waited by alternately chanting "Obama!" and "Yes we can!" -- returns from Saturday afternoon's caucuses in Nebraska and Washington state had already ratified the expected. Once again, repeating a pattern that began in Iowa a month ago, Obama won by lopsided margins in states where the caucus process, in effect, measures intensity of support.

When Clinton finished her flat and forgettable speech, the loudest cheers came from the front of the auditorium where the state party's high rollers and elected officials, who endorsed early, were clustered. By then, the polls had just closed in the Louisiana primary -- and, for Clinton, the song heard along the banks of the Mississippi was "Cry Me a River." With African-Americans making up half the Democratic electorate, Obama prevailed by a hefty 57-to-36 percent margin.

Clinton and Obama were in Richmond in honor of Tuesday's Potomac Primary when voters in Virginia, Maryland and the District of Columbia go to the polls. Every sign and portent suggests that these primaries will continue the Time of Troubles for Hillary. As one of her top black supporters in Virginia said in a mournful voice, "If only we had gotten her here earlier, we might have had a chance."

Whether they support for a president a woman or an African-American, Virginia Democrats radiated a sense of satisfaction that they were on the side of history. This was poignantly underlined when 77-year-old Doug Wilder -- the current mayor of Richmond who in 1989 became the first black governor elected anywhere since Reconstruction -- spoke to the Democratic dinner and crowed, "Can you imagine how far we have come for a J-J dinner to have two personages -- Barack Obama and Hillary Clinton -- and that one of them will be president of the United States?"

Earlier in the evening at a press conference, Wilder, an enthusiastic Obama supporter, critiqued Bill Clinton for his divisive performance in the run-up to the Jan. 26 South Carolina primary. "A time has come and a time goes," Wilder said. "Mr. President has had his time." On stage, though, Wilder was restrained in his partisanship, leaving the role of cheerleader to Gov. Tim Kaine, one of the first major officials to endorse Obama a year ago. (For those keeping score, both Sen. Jim Webb and former governor and 2008 Senate candidate Mark Warner are neutral in the presidential race).

It was nearly 10:30 -- and virtually no one had slipped out to rush home to pay the babysitter -- when Kaine announced, "Now on to the main event, folks." (It was dismissive of the governor to suggest implicitly that Clinton had been nothing more than a warm-up act). Bounding onto the stage, Obama was in his element, delivering a set speech to an already rapturous crowd.

Little that the first-term Illinois senator said was new or different. Like Clinton, Obama directed his fire outside the party at John McCain who, despite setbacks in Kansas and Louisiana Saturday, where he lost to Mike Huckabee, seems to be sailing towards the GOP nomination. But Obama was also adept at pointing up contrasts to Clinton as he honed his partisan rhetoric. Talking about the decision facing the Democrats in picking a candidate, Obama said, "It's a choice between debating John McCain about who has the most experience in Washington, or debating him about who's most likely to change Washington. Because that's a debate we can win."

David Plouffe, Obama's campaign manager, claimed in a late-night press release that his candidate had won 103 delegates Saturday (including three from the Virgin Islands) compared to 58 for Clinton. Given the intricacies of Democratic Party delegate-selection rules that precise number may be arguable. But what is beyond dispute is that Obama -- after being held to a draw in votes and delegates in the Woozy Tuesday primaries and caucuses -- is back riding a wave. And that wall of water seems ready to spill over the banks of the Potomac in Tuesday's primaries.