How will it all end?

Obama surge? Or Clinton comeback? Superdelegates anyone? With the delegate count agonizingly close -- and proportional representation likely to keep it that way -- all bets are off. 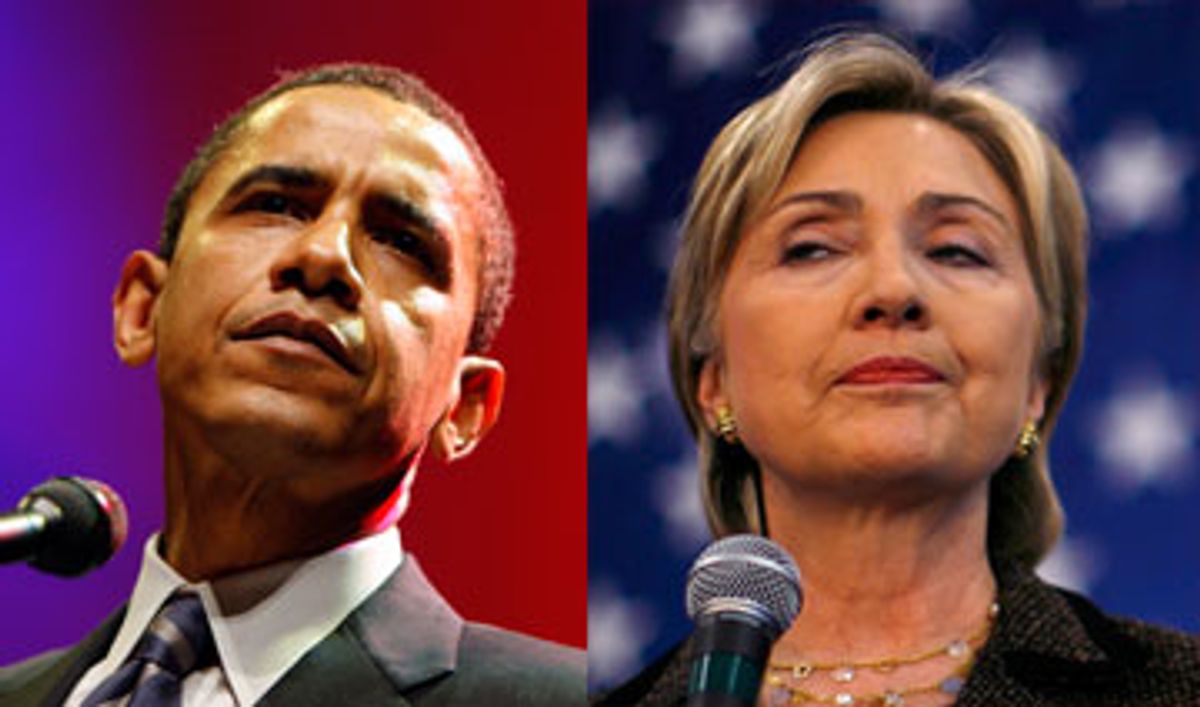 Normally, when you hear the lamentation, "Oh, God, how will it all end?" you are safe to assume that the speaker is referring to the Day of Judgment or a similar religious topic. But these days most of the wailing about the End Times is being done by Democrats unable to decipher how Hillary Clinton or Barack Obama can corral a majority of delegates at the Denver convention. Where once the Democratic primary race was seen as a rush to judgment now it is regarded as a restaging of "No Exit."

Nothing better conveys the white-knuckle flavor of the Democratic race than the apparent maneuvering behind the scenes. According to Time magazine's Mark Halperin, Hillary Clinton met secretly with up-for-grabs former candidate John Edwards in Chapel Hill, N.C., last Thursday and Obama is slated to fly there Monday. Meanwhile, the Clinton campaign announced that it had a new campaign manager, Maggie Williams, who had been Hillary's White House chief of staff. Williams joined the campaign as an unpaid, but high-ranking, consultant after Clinton's brutal third-place finish in the Jan. 3 Iowa caucuses and had initially planned to stay for just 45 days.

This is certainly looking like Sweeps Week for Obama. He pulled off a surprise victory in Sunday's Maine caucuses, despite Clinton's efforts to turn out blue-collar women in this economically troubled state. Obama also easily prevailed Saturday in the Louisiana primary along with caucuses in Nebraska and Washington, winning 39 delegates more than his rival, according to CNN. And he is heavily favored to repeat the hat trick Tuesday in the Potomac Primary (Virginia, Maryland and the District of Columbia). There is nothing in politics like a 7-and-0 week.

But this mini-surge has not brought clarity to the overall delegate counts by major media organizations, nor is it likely to. When it comes to landslide leads in the quest to win the 2,025 delegates needed to win the nomination, there is the CBS News tabulation, which currently has Obama besting Clinton by exactly three delegates, 1,134-to-1,131. The Associated Press has them flipped with Clinton leading 1,135 to 1,106, while the New York Times, using a very conservative methodology and not counting some caucus results, has Hillary ahead of Barack 912 to 745.

In truth, here is what we know about the Democratic endgame -- and it is not much. After Tuesday's vote, the next major milepost will be the March 4 mega-primaries in Texas and Ohio. But based on current trends, neither candidate will win the nomination solely from the delegates they acquire in the primaries and caucuses alone. These statewide delegate contests will be influential but they will not produce the balloon drop for the victorious candidate in Denver. Clinton and Obama simply are too closely matched and party rules mandating proportional representation will prevent either candidate from picking up the more than 900 delegates needed for a convention majority in the 18 states remaining on the calendar. "These two candidates will slug it out, state-by-state, delegate-by-delegate," predicted pollster Mark Mellman, who is neutral in the race. "It goes all the way through the process."

What that means is that the 796 unelected superdelegates (mostly members of the Democratic National Committee, governors, senators and House members) will be the ones who put either Obama or Clinton over the top. According to CNN, only 359 superdelegates have so far endorsed a candidate, favoring Clinton 224 to 135 (these commitments are not binding). That calculation leaves 457 of these party insiders on the fence -- and they are being wooed with an ardor that makes every day seem like Valentine's Day. Even though the Democratic Party itself created these superdelegates after the 1980 campaign, they have always had a whiff about them of old-time machine politics and the kind of rigged conventions that nominated Hubert Humphrey in 1968 over the protests of the antiwar movement.

Donna Brazile, an at-large member of the DNC and thereby a superdelegate, told CNN, "If 795 of my colleagues decide this election, I will quit the Democratic Party. I feel very strongly about this." Members of Congress, who will ultimately be forced to endorse because they are superdelegates, have been nervously calling their campaign consultants wondering whether the politically safe thing to do is to abide by the results in their district. In an Op-Ed article in Sunday's New York Times , political consultant Tad Devine, an expert on party rules, worried that superdelegates taking sides would create "the perception that the votes of ordinary people don't count as much as those of the political insiders, who get to pick the nominee in some mythical backroom." Small wonder that former Virginia Gov. Mark Warner, who is running for the Senate this year and has not endorsed a presidential candidate, sounded positively gleeful when he said in response to a press question about the presidential race Saturday night, "I am not a superdelegate."

While this entire campaign year has been cruel to anyone with the temerity to make confident predictions, there is a sense that the superdelegates will flock to the front-runner if either candidate moves ahead by more than a nose. Steve Murphy -- who ran Dick Gephardt's 2004 campaign and was a media consultant to Bill Richardson this time around -- doubts that either candidate will come out of primaries and caucuses with a lead of more than 200 elected delegates when the primaries and caucuses end June 3 in Montana and South Dakota. (Book your hotel rooms in Helena and Sioux Falls now.) "If there is a discernible lead," Murphy said, "I think the superdelegates go with the candidate who is ahead."

Here are some ways that the endgame could play out on the political chessboard, though it may take several moves and several months to achieve checkmate.

THE OBAMA AVALANCHE: Even though 2008 so far has been a momentum killer (think of Clinton's comeback in the New Hampshire primary), it is arguable that Obama's string of February victories is a predictor of shifting Democratic sentiment. (He is likely to add two more trophies to his collection on Feb. 19 in liberal Wisconsin and his birth state of Hawaii.) If Obama somehow triumphs in Ohio and Texas on March 4, he will have filled in the one blank on his political résumé -- his ability to win primaries in major states outside his own Illinois. At that point, Clinton may sound desperate to restless superdelegates as she pleads with them (probably in vain) to wait until the next major contest, the April 23 Pennsylvania primary.

THE OBAMA BANANA PEEL: Clinton has been pushing (unsuccessfully so far) for weekly debates for a simple reason -- she excels in the format and she keeps hoping that Obama will make a fatal miscue. What might peril Obama would not be just a tart remark (such as his suggesting that Clinton was "likable enough"), but an error that dramatically highlights his inexperience. The question that Clinton wants Democrats (super and ordinary) to be asking themselves is, "Do we want to go up against John McCain with a candidate who was in the Illinois state Senate just four years ago?"

THE CLINTON COMEBACK (MARCH 2008 EDITION): While statewide primary victories do not radically alter the delegate calculus (Clinton, for instance, only won 44 more delegates in California than Obama, despite carrying the state by a 10-percentage-point margin), they do create a compelling political narrative. If Clinton wins Ohio, Texas and Pennsylvania, she will end April having won virtually all the big primary prizes. It will be hard -- but not impossible -- for Team Obama to argue that caucus landslides in smaller states (Kansas, Nebraska, Minnesota and Washington) should count more than the traditional building blocks (California, Ohio, Pennsylvania, New Jersey) of a Democratic Electoral College majority.

OBAMA'S MONEY TALKS LOUDER: Having out-raised Clinton so far in this campaign and having built a huge and loyal online donor base, Obama has about as many money worries as Warren Buffett. Even though the Clinton team boasts that it has raised $10 million online from 100,000 donors since Super Tuesday, the candidate herself recently had to loan the campaign $5 million. Internet fundraising depends on the sometimes mercurial moods of the donors and -- after an increasingly futile February -- it is possible that this financial gusher for Hillary will be short-lived. With more than 20 media markets in the state, the Texas primary, in particular, will be a financial drain on the Clinton campaign, while Obama will almost certainly have the resources for a full TV buy.

THE FLORIDA FANDANGO: Even though Clinton won the January primaries in Florida and Michigan, she did not earn any delegates because the states had violated Democratic Party rules by going so early in the calendar. Both candidates abided by an agreement not to campaign in these two states -- and Obama even managed to have his name taken off the Michigan ballot. Since both are states that the Democrats need to win in November, it long had been assumed that Florida and Michigan would get their delegates back in a wink-wink deal once the party had coalesced around a nominee. But now, especially for Clinton, these two states may be crucial for winning a majority. The problem for Hillary is that the most likely solution is for the DNC to authorize do-over caucuses (much less expensive than primaries) in the two states, which would be scheduled sometime before June 10. Obama (aka "The Caucus King") could become the candidate of destiny by winning these two outlaw states. In theory, Clinton could ask the convention to seat the Florida and Michigan delegations that were elected in the original primaries. But there is a Catch-22: If Clinton needs these votes, it means that she does not have enough support to prevail on the convention floor.

THE ULTIMATE COIN FLIP: It is beguiling to imagine that Clinton and Obama could reach some private agreement to end the trench warfare. But, in reality, it is hard to see how it could happen any more than Democratic National Committee chairman Howard Dean could enforce a deal. The Clintons, as they have demonstrated many times, are not quitters -- and Hillary is not apt to abandon the race before "the last dog dies." There is also the question about whether a protracted fight between these two history-making candidates, even one that lasts until the convention, would really harm Democratic prospects in November. Clinton and Obama would so monopolize the headlines that McCain himself might periodically wonder if the media knew that he was running for president.

It is easy to concoct other more fanciful scenarios, like Al Gore on the third ballot in Denver. My personal favorite (outlandish though it may be) is that the entire race could come down to the decision of one super delegate, pledged to Clinton but wavering. "I promised Hillary, I certainly owe her and she would be a great president," the super-dooper delegate would say in an intense argument with himself. "But that Obama is a comer. I've got to think about my own future, my own political reputation."

And with that, superdelegate Bill Clinton chose the 2008 nominee.