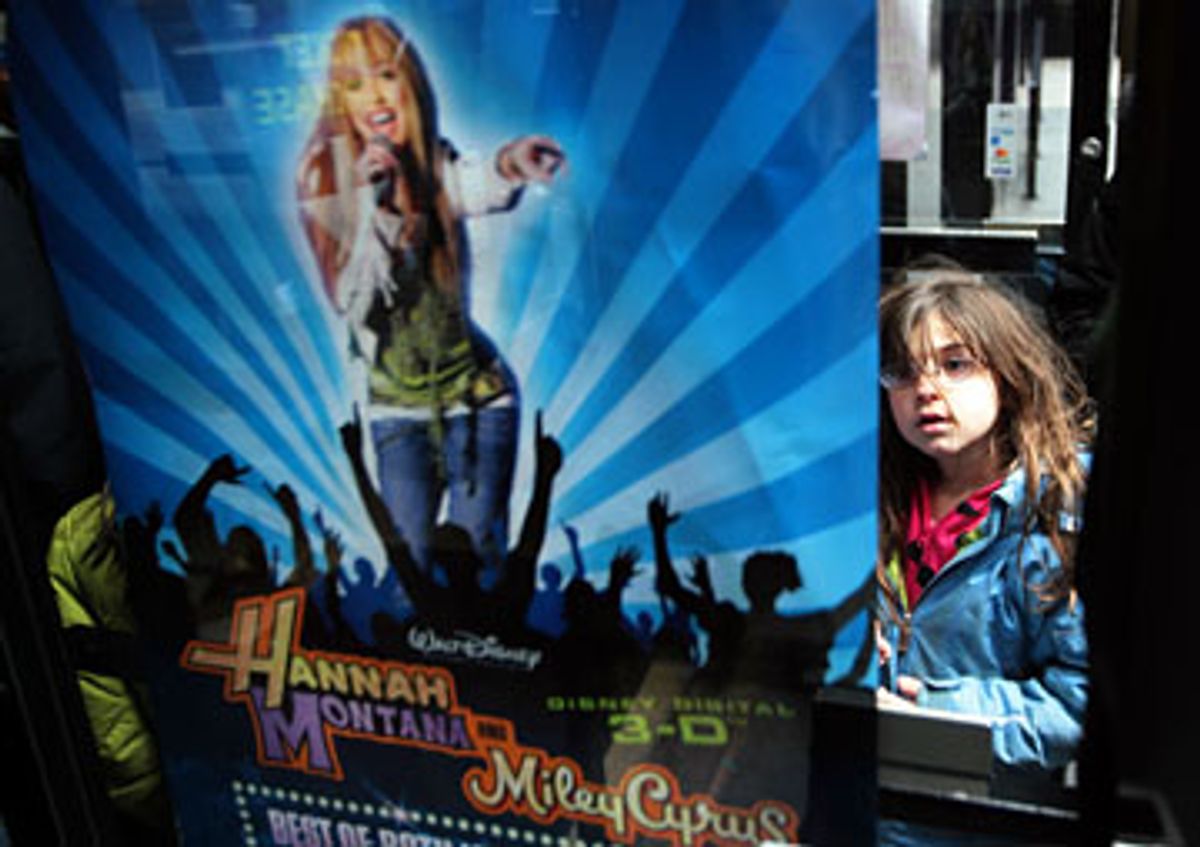 The tweens have inherited the earth. Their dominion was sealed early this month, when the 3-D "Hannah Montana and Miley Cyrus: Best of Both Worlds Concert" debuted as the No. 1 film in the country. Initially intended as a limited-run cinematic bone for the legions who couldn't obtain and/or afford tickets to the adolescent singer's sold-out national tour, the movie is now scheduled to roll out in wider, manifest destiny-level release. Meanwhile, the "Hannah Montana 2" album that debuted at the apex of the Billboard chart last summer still maintains a vise-like grip on the top 10, a few slots down from the new "Hannah Montana 2 Non-Stop Dance Party." You can keep your "Lost" and your "In Rainbows" desirable 18-35-year-old demographic. American pop culture as we know it belongs to my 8-year-old daughter, Lucy, and her preteen posse.

Girls have always been a formidable niche, the force that made a superstar of Barbie and propelled generations of cute boy bands to fame far beyond their talents. But on Jan. 20, 2006, their coup began in earnest. That's the night "High School Musical" premiered on the Disney Channel. More than 7.5 million viewers tuned in to watch it, a ratings record for the network. So Disney aired it again, and again, and again -- to escalating ratings. The soundtrack became the top-selling album of 2006. The revolution was televised, and the little girls won it.

In the ensuing two years, the tween machine has only grown bigger. Last summer's "HSM" sequel became the highest-rated cable broadcast in history, begetting a tour, an ice show, another forthcoming sequel and an unholy amount of Zac Efron-festooned merchandise. In the wake of its success, kid-centric music acts like the Jonas Brothers, the Cheetah Girls, and Aly & AJ have enjoyed massive album sales. The American Girl and Bratz dolls have spawned movies. But out of the smoldering, grape lip gloss-scented crater that "High School Musical" created, something even bigger emerged.

The 15-year-old daughter of mullet-prone, achy-breaky one-hit-wonder Billy Ray Cyrus, Miley Cyrus is the star of the Disney's Channel's juggernaut original series "Hannah Montana." The premise of the show, which debuted just two months after "High School Musical," is as old and as brilliant as the Superman myth itself: Semi-dorky high schooler Miley Stewart leads a double life as the eponymous platinum-tressed, platinum-selling pop idol. Her secret identity known to a sitcom-stock few (including her dad, played by her dad), young Miley has, as she sings in the show's earwormy theme song and tour of the same name, the best of both worlds. If only it were that easy for the rest of us.

My household is, by virtue of choice and economy, not particularly indulgent. We don't have cable. We don't have the space or inclination for a panoply of stuff. My two daughters hear the word "no" on a near constant basis. It's my job to protect them from turning into pint-size shills, to raise them to be thoughtful consumers. I am as skeptical and scared of the marketing deluge aimed at my children as the next parent.

I am also as susceptible to it, subscribing to the homeopathic attitude that a little bit of everything, in small doses, is probably healthy. So when, last summer, Lucy started coming home from day camp bellowing selections from the "High School Musical" and "Hannah Montana" songbooks, I checked them out via DVD. It wasn't long before the whole family had fallen for their respective charms, and both my firstborn and her preschooler sister were squealing for any Miley-centric thing they could get their hands on. I just wish Disney could put Hannah Montana's face on vegetables.

So while I wasn't ready to blow my kids' college funds on concert tickets this year, it was inevitable that I find myself with Lucy in the opening weekend throng for the Hannah Montana movie.

The film is in many ways a Disney princess tale in reverse -- glammed-up Hannah rules the stage for the first half of the show, then morphs into the far earthier, more approachable real girl Miley for the remainder. The jaded part of me knows it's because the Miley Cyrus brand has a longer potential shelf life than her teenybop alter ego. Another part, however, is OK with a stadium of girls getting their first inkling that there's more to life than being blond and shiny. And if a collective worship of Hannah is what makes my children and their friends feel unique, I'm glad the irony doesn't reach them yet. At least they have role models. Boys their age have their comic book heroes and their games and gear, but precious little in the way of human inspiration.

In Hannah Montana, Disney has created a girl-next-door icon and a heroine of moxie and talent. The shticky writing on the show may never rise to "30 Rock"-level cleverness, nor will the music ever make me forget Sleater-Kinney, but I'm not the audience. I can nevertheless recognize that the star herself has undeniable chops. Cyrus has a natural charisma, effortless comic timing, and the pipes to carry off her girl-power lyrics. She is, as Lucy attests, awesome, which is more than I can say for a whole lot of what the entertainment industry is dropping on adults lately.

Say what you will about the overcalculated, quasi-creepy way the Disney machine burrows into our kids' psyches, it's effective. Kids, to the delight of advertisers, are both tremendously receptive to persuasion and astonishingly persistent at nagging. And every day, inundated parents have to pick the hills they're going to die on. The tweens have taken over on an invasion financed by their moms and dads. If a half-hour of Miley karaoke buys some peace in which to cook dinner, or a Hannah purse is the go-to gift for a birthday party, I can begin to understand how Disney saw our collective exposed throat and leapt for it.

It's more than simple wearing down, though. We're often just so eager to make our kids happy, so grateful for entertainment that's innocent and encouraging and age appropriate. If merchandising is often excessive and usually downright cynical, parents' occasional optimistic trust in the things our children love is not. The appeal of Hannah Montana and Miley Cyrus rides largely on its dualism -- the conceit of having a normal family life while successfully pursuing career passion. Though it's a notion that could make any overextended working mother laugh mirthlessly into her merlot, it's one my daughters are only just beginning to grasp. It's one I want them aspiring to as they grow up. I like to think we aging riot grrrls see a little of ourselves in the spirited, boundaries- and decibels-shattering Hannah/Miley, and, we hope, in our daughters. Talent and attitude and ambition can't be bought; they can't be absorbed from an image slapped on a pillowcase. They can, however, be cultivated.

Remember junior high and high school, when the unself-conscious weirdness of childhood gave way to all that adolescent awkwardness and self-doubt? Most adults I know sure do, because lingering inside all of us is a permanent vestige of that person we were typecast as then: the geek, the jock, the angry art chick. We cast a bittersweet glance at our tween girls, and know all that awaits just a few years from now for them. So if they're learning, through parental-patience-testing repeated plays of "Who Said," that "every girl has a choice," if they hear "Nobody's Perfect" enough to consider that it's OK to cut themselves a little slack, perhaps they'll have just a little more ammunition for the esteem-battering days to come. God knows I need to hear that message too. It's not the best of any world. But it's close enough.