McCain apes Bush on Iraq, as Dems stand passively by

His hard-liner stance should doom McCain with most voters, but unless Democrats put the war back on top of the national agenda, he might get away with it. 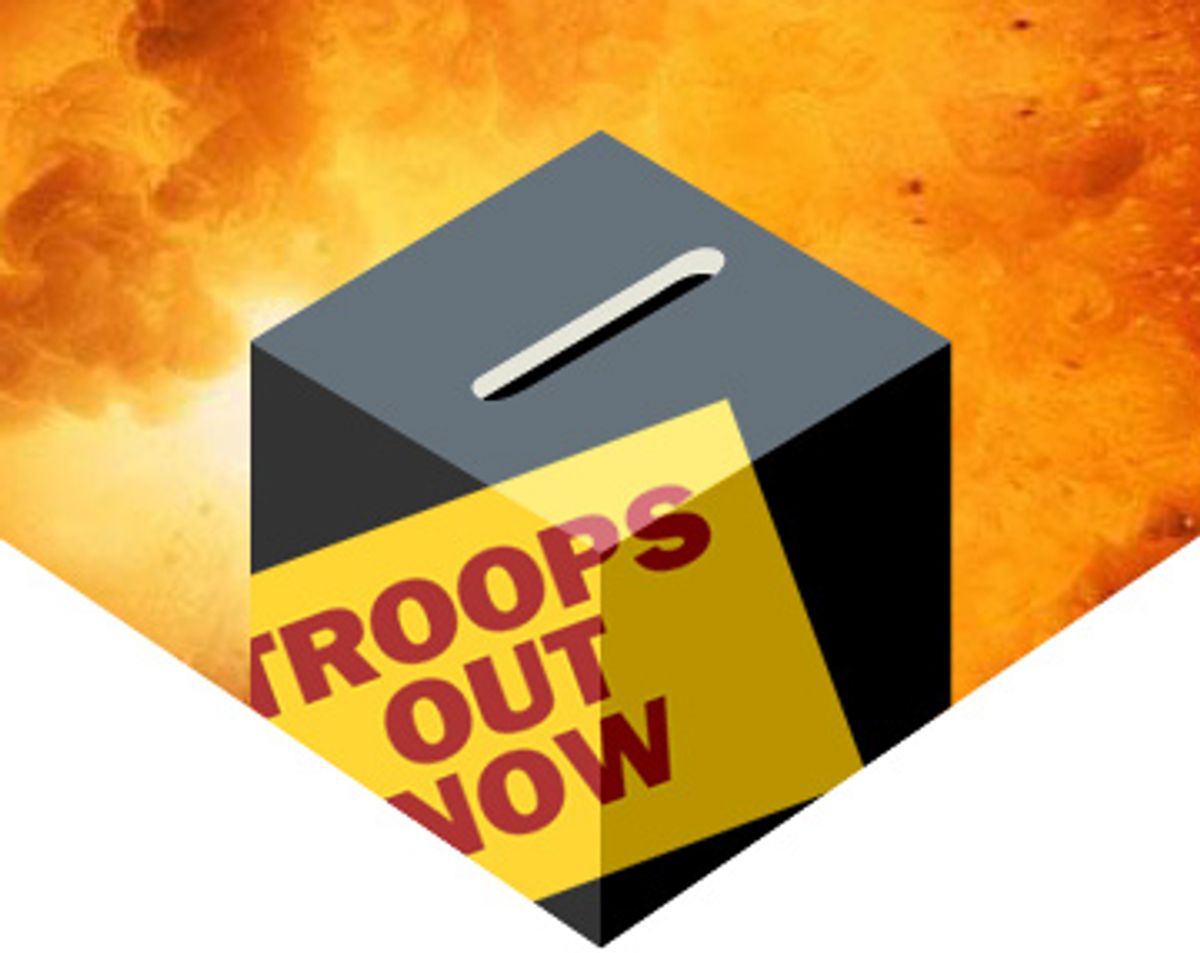 John McCain's Achilles' heel should be Iraq. He is an unapologetic hawk at a time when only right-wing die-hards cling to that position. His hard-line insistence that U.S. troops must remain there until "victory," whatever that is, puts him at odds with a clear majority of the American people, who want the troops withdrawn soon. On the most critical issue facing the country, McCain's position is indistinguishable from that of President Bush, whose 30 percent approval rating in a recent Associated Press-Ipso poll is at its lowest ever. With Rush Limbaugh and his ilk sulking, conservatives divided and demoralized, the war tab up to $2 trillion, and Democratic voters energized by their candidates and flocking to the polls in record numbers, McCain's stance on Iraq should doom him in November.

Yet the major polls -- admittedly far from reliable this far in advance of the election -- show a virtual dead heat in a hypothetical general election matchup, with McCain narrowly leading Hillary Clinton and narrowly trailing Barack Obama. The Rasmussen Daily Presidential Tracking Poll for Feb. 11 shows McCain leading Clinton 45 percent to 43 percent, with Obama leading McCain 44 percent to 40 percent. Other polls, including Cook, ABC/Washington Post, Fox and NPR, also show McCain with a narrow lead over Clinton, and Obama with a small lead over McCain.

If McCain is elected president, he and other war supporters will claim that his victory proves that Americans accepted his view of Iraq -- that "Islamofascists" must be defeated, that the Democrats are the party of surrender, that Iraq is the central battleground of the "war on terror," and that we cannot withdraw our troops until we have achieved final victory. In short, they'll assert that the nation suddenly saw the light and realized that everything George W. Bush and his neocon brain trust have been saying about Iraq was right.

This seems dubious, to put it mildly. The percentage of the population that accepts the Bush line on Iraq has held steady at around 30 percent for years, and even Republican voters are turning away from Bush on Iraq: In the AP/Ipsos poll, just 61 percent gave him positive reviews, down from 65 percent. Barring a near-miraculous improvement in Iraq or a terrorist attack here, there's no reason to think that number will grow. Democrats are a lock, with just one in 10 supporting Bush on Iraq. If McCain wins, it won't be because the swing and independent voters who will decide the election suddenly turned hawkish on Iraq: Just three in 10 independents support Bush's handling of the war. It will be because the independents decided that the Iraq war doesn't matter that much. At least, not as much as their support for McCain and/or their antipathy toward Clinton or Obama.

For this sad scenario, the Democrats will have no one to blame but themselves. For their timid, Republican-lite approach to Iraq and the "war on terror" has put the country to sleep.

Assessing how much Americans care about Iraq is, of course, largely a matter of conjecture. Many people are clearly deeply frustrated and angry; they strongly want to bring the war to an end as soon as possible. Indeed, polls show that the main reason the public has such a low opinion of Congress is that it failed to force Bush to change course in Iraq.

Still, it's hard to escape the conclusion that opposition to the Iraq war is wide, but shallow. For a number of reasons -- the absence of a draft, relatively low U.S. casualties, residual post-9/11 patriotism and fear, the fact that many people initially supported the war, uncertainty about the consequences of withdrawal, and the failure of Democrats and the media either to resist Bush's Iraq adventure or to question the assumptions behind his "war on terror" -- a broad-based, committed antiwar movement has never taken off. During the Vietnam War, hundreds of thousands of people took to the streets to protest again and again. But after the huge (and worldwide) demonstrations just before the Iraq war started, mass opposition faded. Antiwar sentiment surged after the Democratic victory in the 2006 midterms, but deflated again after Congress failed to cut off funding for the war. The limited tactical success of Bush's "surge" (really an escalation) in early 2007 pushed the war off the front burner. The media covers it less. And now that the presidential campaign is raging, the horse race has pushed it even further into the background.

It's hard to quantify emotions, and you can't judge the intensity of Americans' antiwar sentiments simply by whether they hit the streets chanting and carrying signs. But there are good reasons to believe that the country has tuned Iraq out. Polls show that the economy has replaced it as the most important issue. Many Americans simply don't seem to want to think about the Iraq war. Like a tree that falls unheard in the forest, it doesn't exist. If forced to confront it, they shrug their shoulders. Whether we stay or go hardly seems to matter. Suicide bombings will continue, a few Americans will die every week, the Sunnis, Shiites and Kurds will fail to reach a political agreement -- the usual. Nothing good is going to happen.

Disillusionment breeds apathy. The American people tried to bring the war to an end, throwing out the Republican Congress, and nothing changed. As Leonard Cohen sang, "They sentenced me to 20 years of boredom/ for trying to change the system from within." It's as if Iraq is so insoluble that Americans can't be bothered to think about it anymore. They've repressed it so completely that what the presidential candidates think about it or say they're going to do about it doesn't matter. We sleepwalked into the war, and now we're sleepwalking through it.

It's a case of mass cognitive dissonance. A strong majority of Americans have had it with George W. Bush, disapprove of his disastrous war and believe it should never have been fought. But when asked to put their money where their mouth is, large numbers of them are apparently prepared to vote for a man who may continue it for "100 years," as McCain blithely said.

The electorate could waken from its torpor -- but only if the Democrats abandon their cautious approach and call Bush's entire "war on terror" what it is: a colossal mistake.

Terrified of appearing "weak on national security," the Democrats have not come right out and said that America should not be at war with radical Islam, because that's a war we cannot win with bullets. They have not hammered home the point that al-Qaida wants us to stay in Iraq, that every day American troops remain in a Muslim country, more jihadis sign up for a holy war against us. They have not pointed out that by invading Iraq, Bush essentially invited the entire Arab-Muslim world to fight a guerrilla war against us, a war that renders our overwhelming military supremacy utterly useless. They have not forcefully argued that it is not the supposedly appeasing Democrats, but Bush and the GOP, who have rashly endangered our national security by persisting in their failed military approach. They have not openly derided the flag-waving, macho posturings of the Republicans.

If the Democrats were to aggressively take the fight to the Republicans, they would clearly distinguish their position from their opponents' and revitalize the stalemated debate. And they could then authoritatively make another crucial point: We owe the Iraqi people a debt that can never be repaid, and we will structure our withdrawal in such a way as to help as much as possible to repair their shattered nation. Assisting the Iraqi people is in our national self-interest, but it is also a moral obligation. By acknowledging the terrible harm we have done to Iraq (a recent study estimated that the war has been responsible for the deaths of 1 million Iraqis) and our responsibility to do as much as possible to rectify it, Democrats would affirm a universal morality that is completely absent from the selfish, fearful, narrowly nationalist position of Bush and his followers. This would resonate with the American people, who are desperate for moral leadership. And it would help earn back the respect of the rest of the world.

Obama, who opposed the war from the beginning, is obviously in a better position to challenge Bush's "war on terror" and the Republicans' "national security" shibboleth than the liberal hawk Clinton. True to form, Clinton implicitly accepted McCain's framing of the debate with her claim on Sunday that her tougher credentials make her better positioned than Obama to fight back against McCain's argument that Democrats are weak on national security. Obama retorted that McCain "has decided to saddle himself up with George Bush" and that "we need a candidate for the Democrats who will offer a clear contrast."

Obama's strategy of decisively distancing himself from Bush/McCain's foreign policy is not only smarter politically, it holds out the promise of a real break with the discredited establishmentarian approach that landed us in this mess. If Clinton were wise, she would adopt the same strategy, rather than trying to out-he-man McCain. History has shown that given a choice between a real Republican and an imitation, voters will choose the real one.

Naturally, there are risks involved. McCain and the GOP, who already are filling the airwaves with their usual hysterical accusations of surrender and appeasement (Mitt Romney's farewell speech, in which he piously claimed that his continued presence in the race would strengthen global jihad by helping Democrats, was a particularly ludicrous example), would go off the deep end and charge the Democrats with treason. But as the too-close-for-comfort McCain vs. Democrats polls show, playing it safe is risky, too.

In any case, it's long past time for Democrats to take on this supposedly sacrosanct Republican talking point. There will never be a better moment to do it: With no hope in sight in Iraq, Bush discredited and despised, the U.S. military breaking down under the strain, and Americans realizing that the endless war is damaging the economy, the GOP's hard line is looking more and more delusional and self- destructive. If the Democrats can find the courage to say that the GOP's tough-guy emperor has no clothes, they'll wake up the American people, and make the war public issue No. 1 again. And if they can do that, they'll walk into the White House.