Obama's surge extends down the Potomac

Shattering key demographic barriers, Barack Obama wins again by decisive margins. Will Hillary Clinton come out of a tailspin before it's too late? 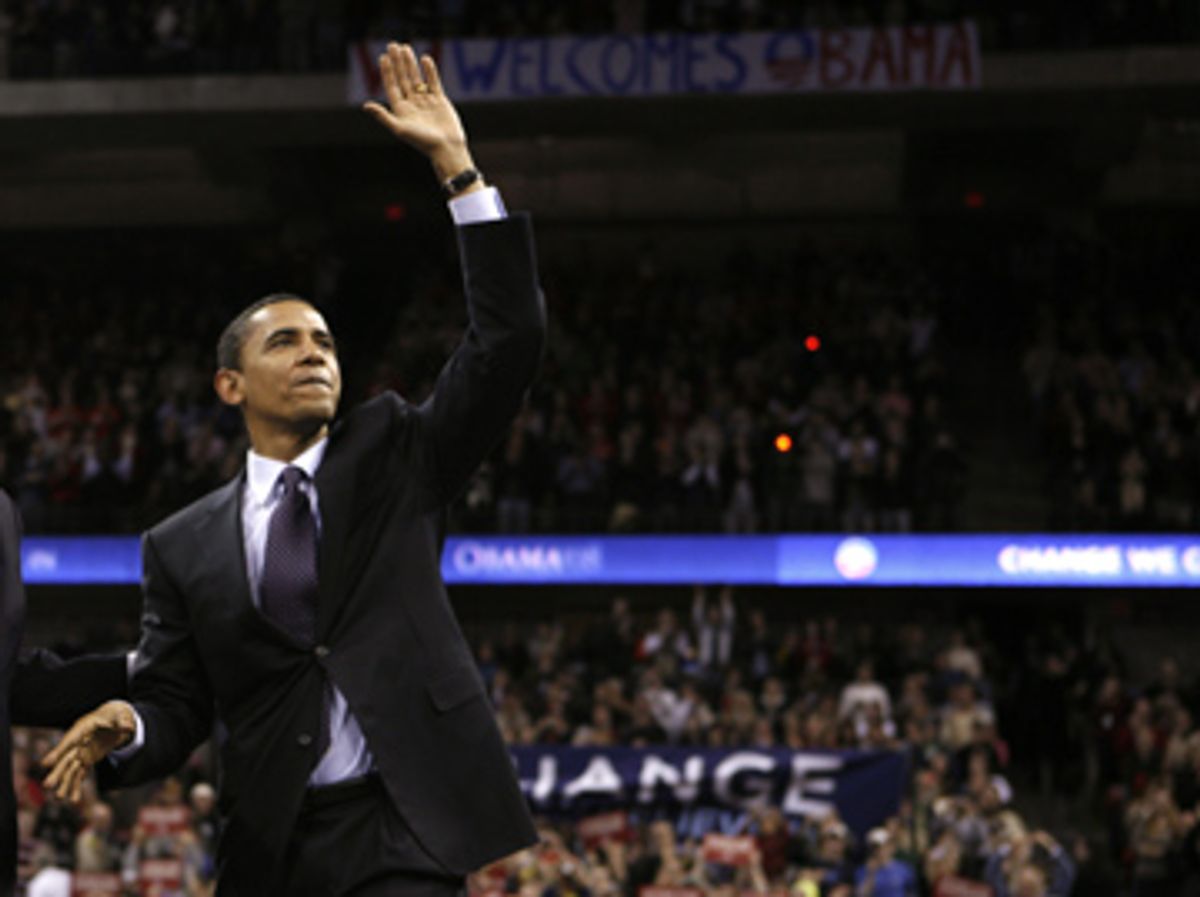 Yawn. Stretch. Nod. Maybe I could close my eyes for a second here at the keyboard. Oh right, a new Democratic election night. With the same inevitable result: Three more landslides for Barack Obama, this time down the Potomac River, from Maryland through the District of Columbia and into Virginia. How boring. That gives Obama seven straight victories in the past week and the unquestioned lead in elected convention delegates.

In his victory speech Tuesday night in Wisconsin -- the site of a Feb. 19 primary that (surprise) Obama is favored to win -- he declared, "The politics of hope does not mean hoping things come easy." But these days, Obama -- the candidate, the symbol and the movement -- is campaigning on Easy Street.

The Virginia-is-for-lovers results were particularly persuasive as the state hearted Obama by a margin of 64-to-35 percent. According to the exit polls, he won 55 percent of white men and narrowly won the overall white vote. That went along with his staggering 88 percent showing among African-Americans.

When the same pattern repeated itself in Maryland -- where the polls closed 90 minutes late because of treacherous weather -- it should have quieted the refrain that Obama only does well among white voters with a blue-ribbon education and a blue-chip stock portfolio. In Virginia, Obama in fact carried every single educational and income category by a hefty margin. The only exception in Maryland was that Obama lost that sliver of the electorate who earn over $200,000 a year -- a group rarely considered part of the hardcore Democratic base.

Here in Washington, Obama coasted home by such a lopsided (better than 3-to-1) margin that it would have been easy to assume that his opponent was the hapless Mike Gravel -- and not Hillary Clinton, the most famous woman politician in the world.

Tuesday night's results will launch a Talmudic discussion among pundits about whether Obama should be crowned the party's front-runner or merely considered to be ahead by a nose as the protracted race enters the far turn. But the easiest measure is the barroom test: See if you can find a single person (other than maybe someone back from an off-the-grid trek in Nepal) who would take a bet on Hillary Clinton at even money.

If there is any lesson from Campaign 2008, it is to beware of the folly of premature certainty. Clinton, who hopes to rally in the March 4 mega-primaries in Texas and Ohio, unquestionably still has a pathway to the nomination. But she is losing altitude at an alarming rate and, if the decline continues much longer, she will risk colliding with rooftops.

Clinton, who in recent weeks has been more accessible to the public than Obama, spent Monday afternoon answering questions in a Political Science 101 class at the University of Virginia. Asked about her recent string of defeats, the New York senator replied, "If you look at states that I have won, they are states that we have to win ... Obviously they include New York, New Jersey, Florida, Michigan, California and Arizona."

That shaky argument (the Michigan and Florida results are not recognized by the Democratic Party) died for good Tuesday. Maryland, which last went Republican for president in 1988, is a state that bleeds Democratic blue. And Virginia -- a once conservative bastion that has elected two Democratic governors and a senator in this decade -- is the kind of emblematic swing state that the party has to carry if it ever is going to graduate from the Electoral College.

Speaking to the students at the University of Virginia Monday, Clinton belittled Obama's skein of victories in caucus states saying, "If you show up at a caucus, you're highly motivated and often times very much [fixated] on one issue or a certain ideological position." Of course, the next day the former first lady went on to lose three primaries. Clinton also bragged Monday that her support among voters earning less than $50,000 a year better equipped her to wage economic warfare against John McCain. Whoops -- that became Obama territory in Virginia and Maryland.

Even before Tuesday's returns became official, Clinton's deputy campaign manager Mike Henry (who once wrote a controversial, but prophetic, memo recommending writing off the Iowa caucuses) resigned. Henry's departure came 24 hours after Maggie Williams replaced Patti Solis Doyle as campaign manager. There are many Clinton supporters who privately fear the worst. As one Democratic superdelegate, who has endorsed her, put it fatalistically, "I don't see any strategy, any way that she can pull it out."

The only thing that Clinton has going for her is the pause that refreshes. Aside from next Tuesday's Wisconsin primary and Hawaiian caucuses, the hyperactive campaign calendar comes to a grinding halt for three weeks. Twenty-one days is the equivalent in politics of "War and Peace" plus the collected works of Marcel Proust. With two Clinton-Obama debates already scheduled, that is long enough to rewrite the campaign's narrative yet again. But Hillary Clinton needs something fast to stop Barack Obama -- the Democratic candidate who has replaced her husband as the Man from Hope.