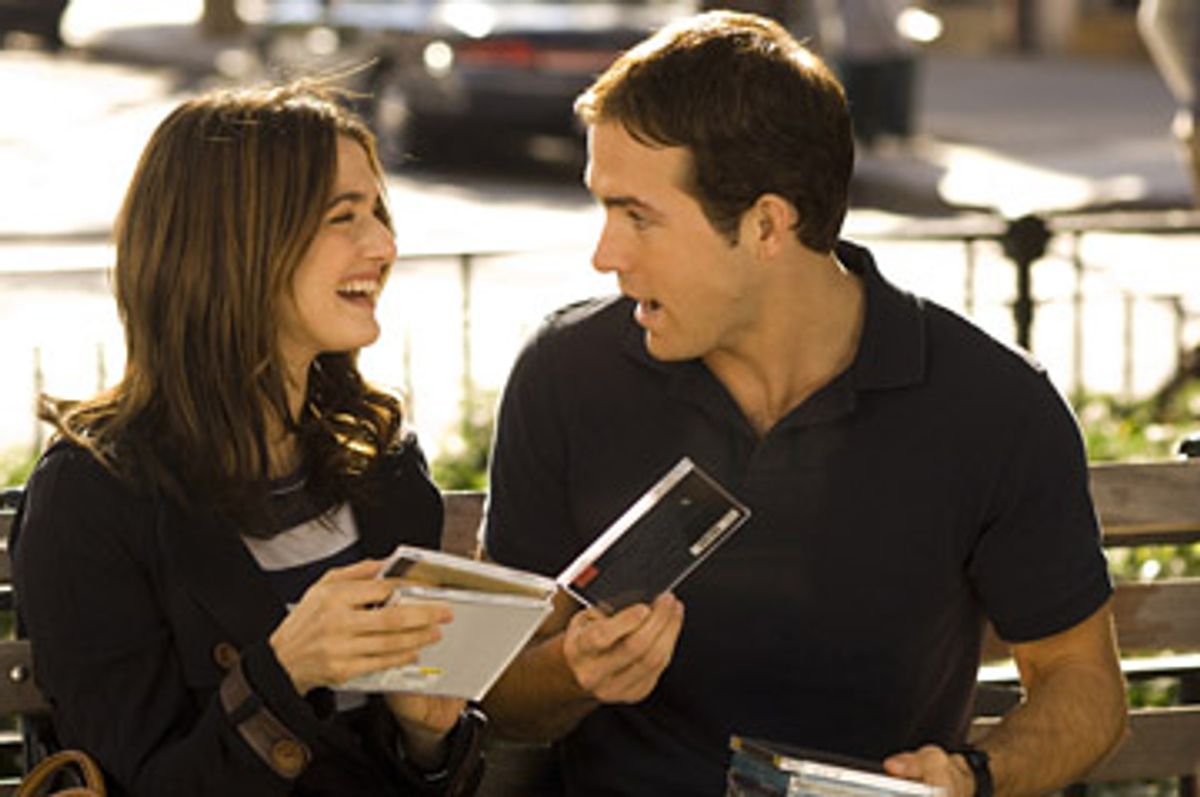 At a sleepover at her dad's unpacked-box-strewn new apartment on the cusp of his divorce, Will Hayes' (Ryan Reynolds) daughter, Maya (Abigail Breslin), browbeats him into telling the story of how he and her mother first fell in love. She's seeking closure, or, at least, a meandering bedtime narrative to knock her unconscious. Her father, perhaps sensing that just one romantic failure doesn't pack enough punch, counteroffers to spin the tale of the three great loves of his youth, changing some of the names and details, and challenges Maya to guess which lucky girl will become the future ex-Mrs. Will Hayes. Come with us, won't you, to a simpler time: the early '90s.

"Definitely, Maybe" may be the first midlife crisis movie for Generation X. As Will unspools the chronicles of his Charlie's Angels of love, we watch as he transforms from a Nirvana-listening, Clinton-campaign-working idealist into a bummed-out, overcompensated ad executive whose marriage just crashed and burned. You who've ever clutched a Zima, the bell tolls for thee.

Amid flashbacks to the era of shoe-box-size cellphones, cursing the dial-up connection on Delphi, and smoking American Spirit cigarettes as a seduction technique, we meet Will's conveniently archetypal heartbreakers. There's the wholesome hometown blonde, Emily (Elizabeth Banks), the free-spirited redhead, April (Isla Fisher), and the workaholic journalist brunette, Summer (Rachel Weisz). As the Clinton years march on, Will slips in and out of entanglements with all of them, and we see both their attractions and their potentials for disaster. What draws people together at a moment in their lives -- comfort, adventure, ambition -- is, after all, frequently the same stuff that may later pull them apart. Happy Valentine's Day!

The movie would likely be a 90-minute excuse for a round of SSRIs were it not for the competence of its cast. Ryan Reynolds' smarmy charm has, in recent years, blossomed into something subtler and more affecting. The slickness of his earlier films is still evident as he woos his three lovelies, but it serves now as a contrast to the longing and disillusionment of his character's later years. When his daughter, Maya, says, "You're not happy," Reynolds makes for one credibly miserable shambles of a mopey, eating-jelly-off-his-fingers kind of dude. And Breslin, as Maya, shares Reynolds' world-weariness. The two have a compatibly soulful rhythm that lends credibility to their chipped family unit. Banks, Weisz and Fisher, meanwhile, all gamely flit in and out of the scenery, working up believable chemistry with Reynolds and then flicking it off as their romances wax and wane. Kevin Kline even pops in for a few scenes, to chew the scenery as Summer's hard-living, Christopher Hitchens-esque lover and mentor.

"Definitely, Maybe" isn't a particularly good movie. It's hard to make either romance or comedy out of relationship wreckage, not to mention career ennui, and the pace is often meandering and sulky. The movie is mostly a jumble of missed connections and regrets, and, despite Maya's pronouncement that her dad sounds like a "slut," very little intimacy. Writer and director Adam Brooks (who surely owes the world penance for co-writing the screenplay for "Bridget Jones: The Edge of Reason") also borrows freely, nay, sluttishly, from a passel of other sources: The setup is straight out of "How I Met Your Mother," there's a bedtime story, complete with narrative interruptions, lifted from "The Princess Bride," an "I want to wake up next to you" speech reminiscent of "When Harry Met Sally," a quest for a far-flung used book that echoes the basic plot of "Serendipity." That's the problem with "Definitely, Maybe" -- it's too much of everything, not enough of any one thing. Too many plots and subplots, too many ideas grab-bagged from elsewhere.

But if its situations are clichéd, the film is also at times startlingly complicated and bracingly sad. You wouldn't expect a film that's being marketed as a breezy mid-February bonbon to turn out to be a requiem for possibilities gone wrong, but it is. This is a movie, after all, elegiac enough to quietly devote a moment to Will looking from a plane window at a twin towers-bedecked downtown. You wouldn't expect a mainstream movie to resist the inclination to make everything work out perfectly for all its characters, but it does. It may offer the potential of future contentment, but unlike last month's "27 Dresses," for example, it makes clear from the outset that a trip down the aisle isn't the answer to all of life's problems. Will's happy ending, by his own admission, isn't his job or his marriage -- it's his daughter. The film doesn't leave it there -- there have to be a few more twists before the end credits roll -- but the gist remains: No matter how much disappointment can envelop our lives, love and joy can still manage to poke holes through it anyway. It's a useful ideal to hang onto, even if it's not exactly the sort of sentiment that sells red-ribboned cards, or can save a well-intentioned movie from failing to live up to its own expectations.