For some reason, Mike Huckabee is still running for president. Is he really auditioning for the No. 2 job -- or a show at Fox News? 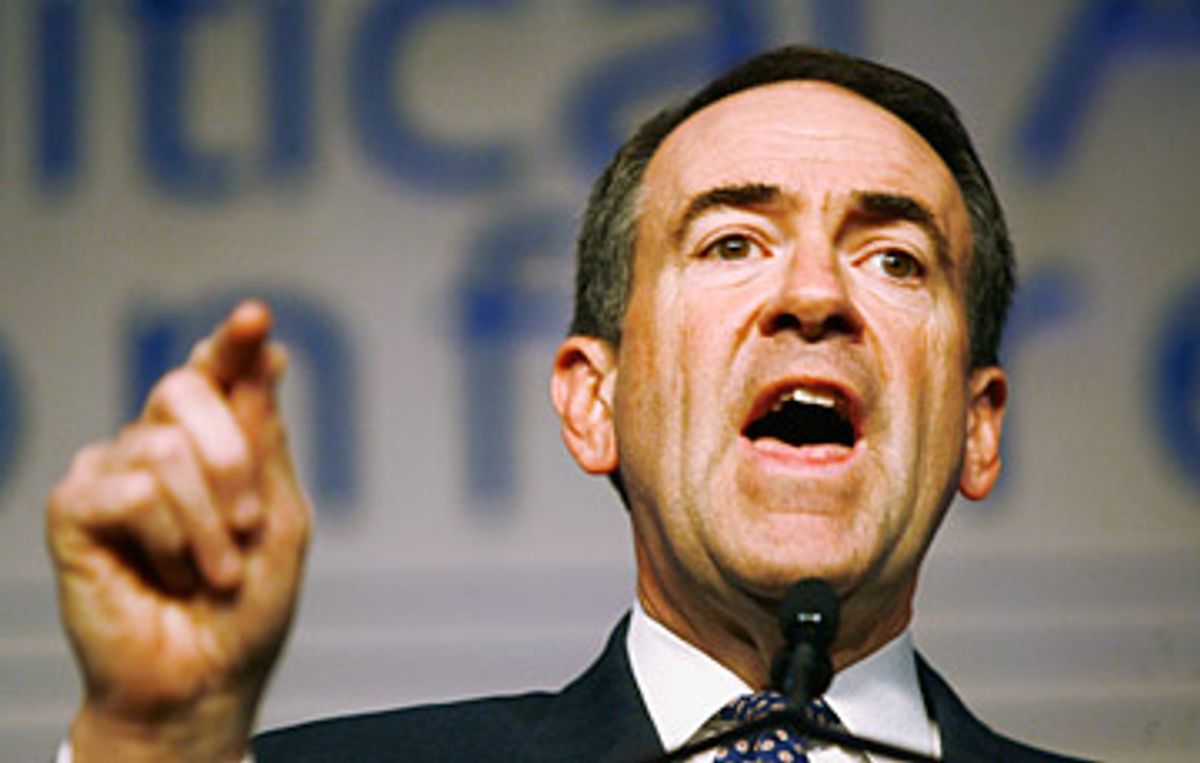 A week ago, John McCain's campaign put out a sneering memo about delegate counts that all but dared Mitt Romney to stay in the Republican race for president. Then, McCain strategists said Mike Huckabee was "still a factor," but that Romney had a nearly impossible task ahead of him to win.

It basically worked; Romney quit the next day. But for anyone who wondered when a similar memo would be hurled Huckabee's way -- considering how warmly he and McCain have treated each other throughout the campaign -- the answer came not very many hours after McCain emerged as the clear winner in Maryland, D.C. and, yes, Virginia. (Early exit polls had Huckabee winning, but McCain took the state by 9 points in the end.)

"The results from tonight's primary elections in Virginia, Maryland and Washington, D.C., make it mathematically impossible for Governor Huckabee to secure the Republican nomination for president," McCain campaign manager Rick Davis wrote Wednesday morning. "He would need to win 123 percent of remaining delegates." Those of you keeping score at home know that that is, of course, not possible. Meanwhile, McCain, according to the Associated Press tally, could inch his way to the nomination by winning only 35 percent of the delegates left -- it wouldn't be pretty, but it would get him there.

So what, exactly, is Mike Huckabee doing still hanging around a race he can't win? He told reporters in Little Rock, Ark., Tuesday night that he didn't plan to give up anytime soon: "I've not been one who believes that you leave the field because it's gotten difficult. You stay, and you keep playing until the last second of the clock has sounded."

Already, he has defied the conventional wisdom among Romney supporters, who expected Huckabee to endorse McCain hours, if not minutes, after Romney dropped out. If -- as other observers think -- he's hoping to collect enough delegates and momentum to persuade McCain to put him on the ticket, you'd think embarrassing the front-runner by beating him last weekend would be a bad way to go about it. On the other hand, if he's angling for a Fox News TV show in the future, as some Little Rock Republicans think, the free airtime can't hurt.

At any rate, winning the Kansas caucuses and Louisiana primary on Saturday seemed to spur Huckabee on. (He was also hoping to win the Washington state caucuses after the fact, but the final count went against him.) One campaign strategist said the weekend wins and narrow loss showed "people aren't satisfied with going ahead and just turning the presidency over to John McCain." (Which is certainly a sentiment Barack Obama and Hillary Clinton would endorse.) Jim Pinkerton, a senior Huckabee advisor, said the former Arkansas governor would carry on in spite of the count. "There's the mathematics of these things, and there's the metaphysics," Pinkerton told Salon.

But even the metaphysics turned against Huckabee in the Potomac primaries. He never really contested Maryland or the District of Columbia, but Virginia seemed to present a halfway decent chance for a sudden spark of Huck-mentum. Nearly half the Republican voters in the state said they were born-again Christians. A quarter thought abortion should always be illegal, with no exceptions, and 31 percent called themselves "very conservative." The state's rural counties in the south and west aren't so different from the Southern states Huckabee won on Super Tuesday, and if independents headed to the Democratic race in Virginia's open primary, those conservative voters could have handed him an edge.

Huckabee gave it a shot. He addressed a big crowd over the weekend at Liberty University, the fundamentalist Baptist stronghold in Lynchburg, Va., founded by Jerry Falwell (once a McCain nemesis, turned a friend before his death last year). He sent out fundraising appeals that emphasized his support for the most hardcore conservative ideas -- constitutional amendments banning abortion and gay marriage, replacing income taxes with the FairTax, deporting undocumented immigrants. A handful of conservative activists, like Paul Weyrich and James Dobson, endorsed him after Romney quit, making Huckabee the only alternative to McCain for Republicans who didn't want to enlist in the Ron Paul revolution.

And with all of that going for him, he still lost. Huckabee swamped McCain among those "very conservative" voters, but lost badly among moderates and "somewhat" conservative types. McCain and his aides even tried to argue afterward that Huckabee hadn't won as convincingly as it seemed among the right wing, raising questions about the exit polls once it was clear how widely they varied from the final margin. Asked what message he took from the Virginia vote, McCain deadpanned, "I take the message that we beat him by nearly 10 points."

By now, it's clear that Huckabee drags only a certain slice of voters away from McCain -- evangelical Christians. The movement conservatives whom Romney tried to rally against McCain after losing Florida never liked Huckabee much to begin with. House Republican leaders -- whose hostility to McCain didn't start to waver until this week -- endorsed him en masse Wednesday nonetheless. There isn't much of the GOP electorate left for Huckabee to win over. And even if he found enough votes somewhere to sweep the rest of the primaries, as McCain's camp helpfully pointed out, he'd still fall short.

If Huckabee can't win the nomination, though, he still plans to speak for the obviously loyal constituency he has developed through the campaign. "This is an election, not a coronation," he said Wednesday, "and I owe my supporters an opportunity to have their voice heard until we have a clear winner."

Maybe because Huckabee no longer threatens his path to the nomination, McCain doesn't seem to mind the lasting competition that much. "I don't pretend that I wouldn't like Governor Huckabee not in the race," he said Wednesday, coming close to graciousness without quite achieving it. "Of course I'd like for him to withdraw today; I think it'd make it much easier. But I respect his right to continue in this race for just as long as he'd like to."

There isn't much Huckabee's presence in the race is preventing McCain from doing to prepare for November, as his aggressive speech Tuesday night aimed at Obama made clear. "Would we rather have McCain on the road doing fundraisers every day?" one McCain strategist said. "Probably." But the pretense of a continuing primary campaign gives him an excuse to get around the country and make news, anyway, so that might be a wash.

As long as the race stays friendly, few Republicans see much harm in Huckabee's sticking it out a bit longer. "I think he's gained enormously over the course of this, and strengthened his position for whatever he chooses to do next, and at the same time, he may play a pretty powerful role in reunifying the Republican Party," said Rep. Tom Cole of Oklahoma, who runs the GOP's House campaign committee. "The personal vitriol that can sometimes occur in these things just seems to be absent between these two, so that's sort of a nice way to end up a pretty spirited process."

For McCain, there may even be a strategic upside. "If we have no contest at all, and the other side does have a contest, it's hard to stay in the news," senior advisor Charlie Black said. "If [Huckabee] is having fun, and he wants to stay in the race, that's fine."

That may be the real explanation for Huckabee's staying power -- he's having fun. And if that means he goes on through the Texas primary on March 4, so be it. "There's no doubt that he thoroughly enjoys campaigning and enjoys being out there," his former press secretary in Arkansas, Rex Nelson, told Salon. "He's never been one -- either as a political figure or as an elected official -- to tilt at windmills. He usually has some method to what he's doing. I don't see him just going on and on in a Ron Paul sort of way."

"I didn't major in math," Huckabee said earlier in the week. "I majored in miracles, and I still believe in those, too." But even one of them might not help Huckabee now, so don't be surprised if the Huck-a-Bus winds up parked sometime next month.