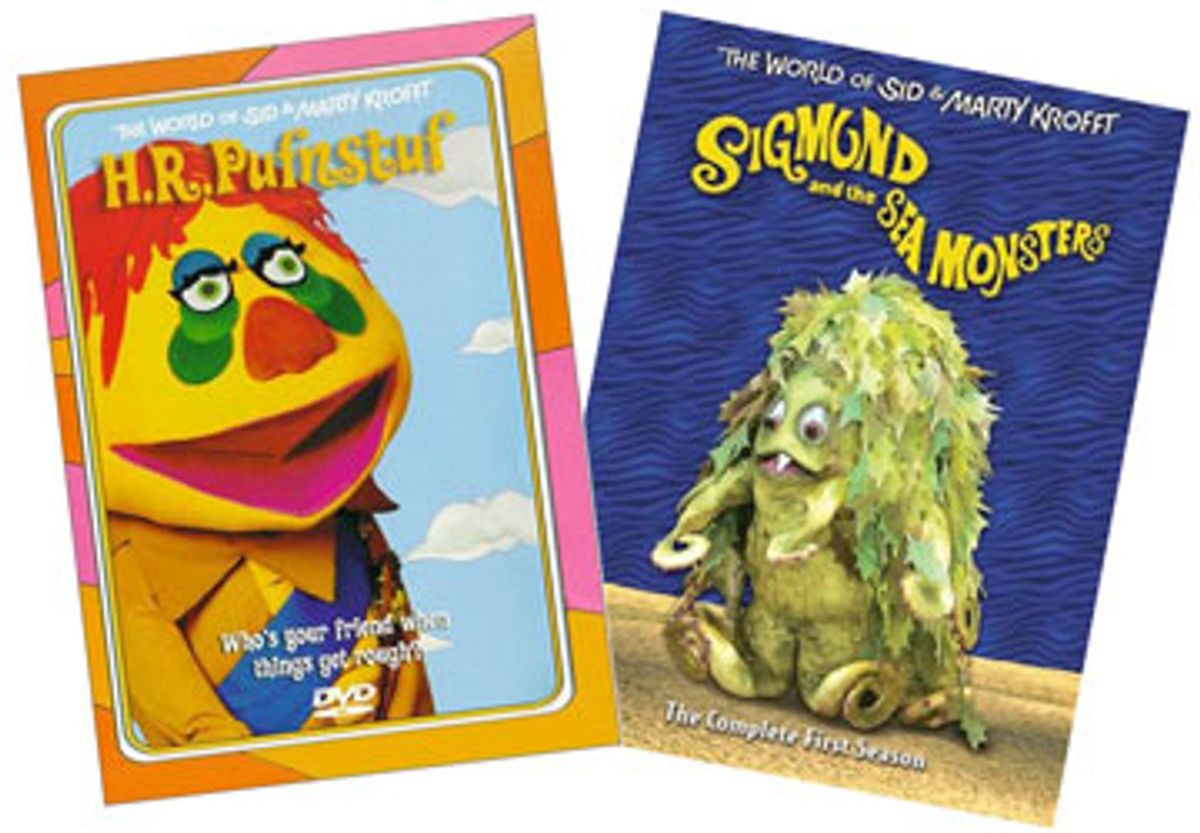 The Krofft shows were some of my earliest television viewing experiences, which might be cause for concern. The live-action fantasies devoured by a generation of children every Saturday in the late '60s and '70s -- "H.R. Pufnstuf," "The Bugaloos," "Lidsville," "Sigmund and the Sea Monsters," "Land of the Lost," "The Lost Saucer" and "Far Out Space Nuts" -- are about as close to an acid trip as kids programming gets, with their freaky Day-Glo colors, talking monsters and surreal daydream sequences. The Krofft shows (which later included "The Krofft Supershow") are one of those cultural phenomena that convince you, in retrospect, that the entire '70s entertainment industry was smoking a giant fattie and sprinkling acid over their morning cereal. Co-creator Marty Krofft has pshawed these claims. "You can't do drugs when you're making shows," he's said. Suuuure. Tell that to the cast of "Saturday Night Live."

It's been years since I watched the Krofft shows, but every once in a while some stitch of detail will pop into my consciousness like a recovered memory of a drunken escapade. But instead of wondering, "Did I really pole-dance at the office party?" I'll think, "Was there really a show about Freddy the Talking Flute?" (There was. It was called "H.R. Pufnstuf." And as anyone who remembers it will tell you, it's waaacky.) I'm not alone. The trippy shows were rediscovered and championed by the stoners and hipsters who grew up on them, the perfect entertainment to enjoy while firing up their bongs.

Brothers Sid and Marty Krofft came from a family of puppeteers and rose to prominence in a pre-CGI time when that art form felt exciting and fresh. Along with "Sesame Street" and "The Muppets," the Krofft shows represent something of a golden era of strings and foam. But unlike the Children's Television Workshop shows, where friendly monsters ambled down placid streets, the Kroffts' visions were loopy inverted realities. Children were stranded in an alternate universe, the '70s equivalent of "Alice in Wonderland," "The Wizard of Oz," Narnia in neon. In "H.R. Pufnstuf," a little boy washes up on the shores of Living Island, a place where everything is alive. In "Land of the Lost," an earthquake sends three rafting adventurers through a time warp and spits them out in a prehistoric era. One of the shows' trademarks was to begin each episode with a song that explained these wacky rabbit-hole fantasies -- I was just minding my own business, and then I wound up on a flying saucer, or smuggled a sea monster into my beach house, or accidentally launched a spaceship. Whoops! Cue opening credits. (If only "Lost" could begin with such a snappy musical summary.)

Sadly this DVD of seven pilot episodes doesn't include my favorite Krofft show, the 1976 girl-power classic, "Electra Woman and Dyna Girl" (starring Deirdre Hall, who would go on to star as Marlena in "Days of Our Lives," thus following me through my adolescence as I slid over from Saturday-morning cartoons to weekday soaps). So this is not the Krofft DVD for completists. (That would be the "The World of Sid & Marty Krofft," or the complete series of "H.R. Pufnstuf," or the complete series of "Sigmund and the Sea Monsters.") However if, like me, you're less committed than you are curious, this sampler is a good way to dip a toe in the deep end of psychedelic nostalgia without drowning in it. One episode of "Sigmund and the Sea Monsters" is kind of cute. Ten episodes of "Sigmund and the Sea Monsters" is a kind of cruelty.

My experience with "Sigmund and the Sea Monsters" is actually fairly typical for the collection: I loved the show as a kid and adored Sigmund, the lovable sea monster who refused to scare humans (played by Billy Barty, who also played Sparky the Firefly in "The Bugaloos"). But as an adult, I found the show painfully broad, even a bit boring. It's no cornier than, say, an episode of "The Smurfs" or "The Brady Bunch," but my memory of the Krofft shows is that they were amazing, epic.

There is a little bit of the epic in "Land of the Lost," which ran from 1974 to 1976. In a post-"Jurassic Park" era, "Land of the Lost" is nothing short of laughable, with its Claymation dinosaurs and cutout scenery. But the ambitiousness of the show is almost touching. It's one thing to feature dopey talking monsters, another entirely to feature T. rex and prehistoric man. I almost clapped when the show's chimpanzee-like humanoid, Chaka, appeared, in part because I realized that, with his windswept hair and dark, furry eyebrows, he looked like an early Donald Trump.

I don't have kids, but if I did, I'm certain they would roll their eyes into the next room watching the Krofft shows. The cardboard set pieces and Halloween get-ups must seem pretty lame in an age of Brad Bird and Pixar. But you have to hand it to the Krofft shows for originality; even in a landscape as goofy as children's TV, they still stand out. Do any of today's shows feature Freddy the Talking Flute? No, I don't think so.