The quest for universal healthcare

Clinton's and Obama's proposals are nearly identical. So which candidate offers the better medicine for America's health coverage ills? 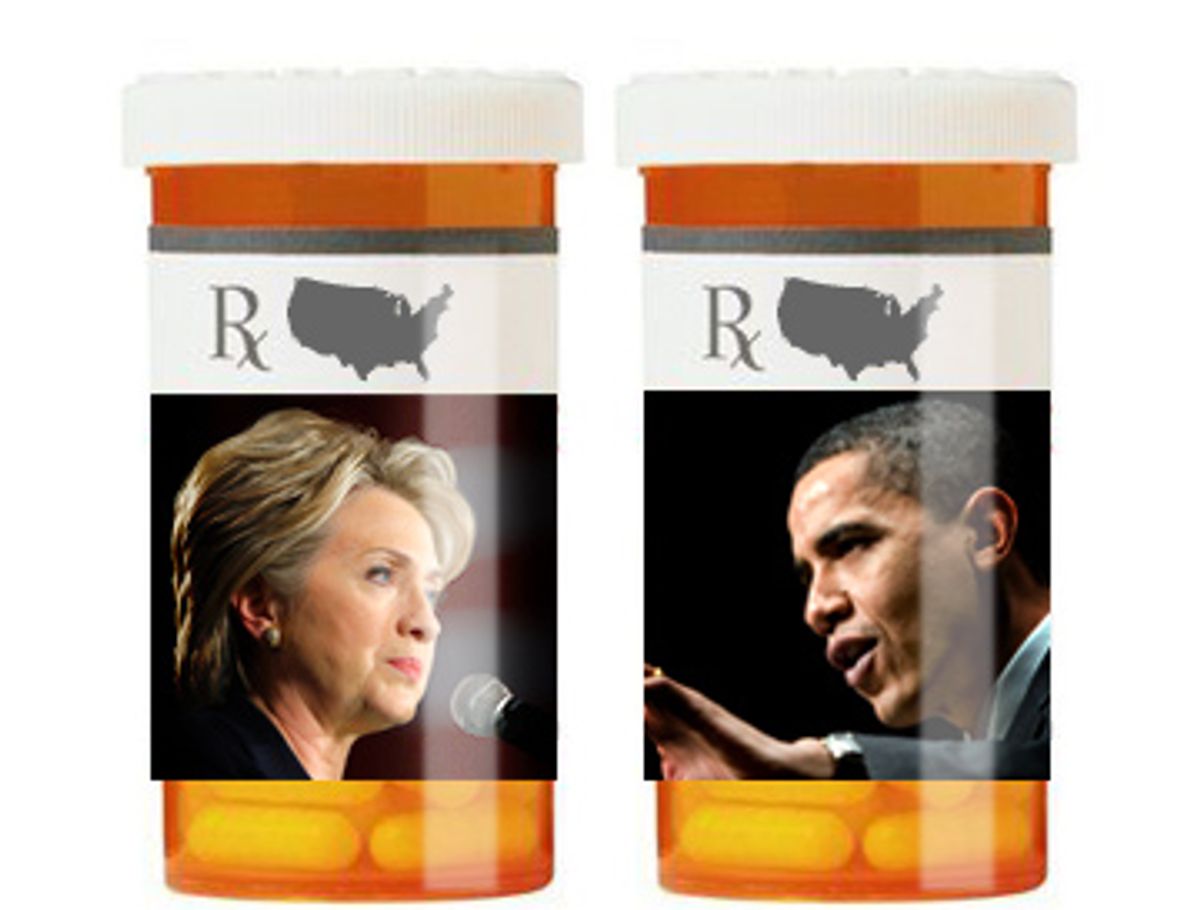 In recent days, the Democratic presidential race has offered voters an invaluable primer on questions ranging from the definition of plagiarism in politics to the responsibilities of superdelegates in a 21st century democracy. Of course, high-decibel topics like these have absolutely nothing to do with serving as president and precious little connection with defeating John McCain in November.

But for those traditionalists longing for an issue distinction between Barack Obama and Hillary Clinton (something less vaporous than slogans like "Change" and "Experience"), there is always that hardy Democratic perennial -- healthcare. In the run-up to Tuesday's Wisconsin primary, Obama and Clinton each ran TV ads claiming that their plans were superior in providing "universal coverage" for Americans without health insurance. (The healthcare commercials, their scripts and a nonpartisan assessment of the dueling ad claims can all be found at Annenberg Political Fact Check.)

The point of contention -- and one virtually certain to be repeated when the two Democratic survivors face off at a debate in Texas Thursday night -- is whether the government should mandate that individuals carry health insurance. Both Obama and Clinton propose roughly the same set of subsidies to make this insurance affordable for lower-income and middle-income Americans. Both candidates also require that all children should be covered. But only Clinton extends this mandate to all adults.

That is it. That is the flaming red-hot center of the current Democratic healthcare debate. The Clinton argument is that the only way to achieve universal coverage is to legally require it. As her plan states, the responsibility of an individual is "to get and keep insurance in a system where insurance is affordable and accessible." (An individual mandate is the centerpiece of the cutting-edge Massachusetts state plan, which has not yet been fully implemented.)

The Obama proposal is optional under the theory that virtually all Americans want health insurance -- and the obstacle is cost, which now would be subsidized. Austan Goolsbee, a University of Chicago economics professor and a top Obama advisor, asked and answered the obvious rhetorical question: "What percentage of the uninsured are trying to game the system? The answer is not very many."

Like almost all projected coverage statistics, that contention is debatable. The Clinton campaign has brandished the statistic that 15 million Americans would be left without health insurance under the Obama plan. And there are healthcare experts, unaffiliated with either campaign, who support this number as a rule-of-thumb estimate. Kenneth Thorpe, the chairman of the Department of Health Policy and Management at Emory University, said in an interview that the 15 million figure in a nation of 300 million was "about right." Thorpe based his rough calculations on his experience with Vermont, a state that has achieved 94 percent insurance coverage through generous subsidies.

But this numbers game is comically imprecise. Healthcare models tend to be about as reliable as Democratic primary polls. How aggressively any program would be implemented (for example, the way individuals would be informed of their eligibility for healthcare subsidies) would also shape coverage statistics. And all of these "how many insurance policies can dance on the head of a pin" questions are based on the laughable assumption that Congress would approve an Obama or Clinton plan as written.

Both candidates find it in vogue to be vague when it comes to detailing how their subsidy plans would work. Obama promises, "Individuals and families who do not qualify for Medicaid or SCHIP [State Children's Health Insurance Program] but still need assistance will receive income-related federal subsidies to keep health insurance premiums affordable." How large a subsidy and precisely what "affordable" means are puzzles presumably to be worked out after the election.

Clinton does a bit better with her pledge to offer a refundable tax credit "to prevent [health insurance] premiums from exceeding a percentage of family income." Asked what percentage of family income, Neera Tanden, the policy director for the Clinton campaign, said, "There are numbers on the order of 5-to-10 percent. Obviously, we would like it to be at the lower end. But that's the kind of thing that you work on with Congress."

Almost all the costs in the Clinton and the Obama plans go toward making health insurance affordable. At first glance, the Clinton subsidies seem more ambitious since her campaign estimates an annual price tag of $110 billion. In contrast, the Obama campaign says that their plan "will cost between $50-$65 billion a year when fully phased in." But this distinction is nearly meaningless since Clinton is calculating the total expense while the Obama number has factored in projected savings. Thorpe, who helped both campaigns project costs, considers the subsidy plans to be virtually identical.

Which brings us right back to the tangled campaign history of the mandate issue. In February 2007, John Edwards was the first Democratic candidate to come out with a healthcare plan -- and he broke with the baby-steps incremental approach by calling for a universal mandate. That put Obama in a strategic quandary. Should he match Edwards and run the risk of Clinton attacking both of them as politically unrealistic? Or should he take a safer route by pushing for subsidies rather than legal requirements?

Once Obama announced his decision in late May 2007, Clinton was free to go in either direction. Abandoning her cautious reputation, this bruised veteran of the 1993-94 healthcare wars emulated Edwards in proposing a universal plan built around mandates.

Only rigorous enforcement of a mandate to obtain health insurance would bring America to the verge of universal coverage. The enforcement mechanism in her own plan is something that Clinton has carefully reserved to be worked out with Congress after she is elected, though she has expressed interest in less draconian steps, such as automatic enrollment whenever someone visits a doctor or hospital. But whatever the gaps in the eventual Clinton plan (and remember that not even Medicare hits 100 percent coverage), her approach -- as opposed to Obama's -- would almost certainly bring the nation closer to the holy grail of health insurance for all.

But at what political cost? Robert Blendon, a professor of health policy at Harvard and an expert on public polling on the issue, said, "In a primary, getting everybody covered is really important to Democratic voters. But it is somewhat less important to independents. Independents are more split on the question of mandates. So in the general election, not having a mandate is not going to be a problem." Or as Goolsbee, the economic advisor to Obama, argued, "If you're going to do a mandate right off the bat, you're going to expend a lot of political capital to do it."

So what conclusions should a befuddled Democratic voter derive from the healthcare hoopla? When it comes to the domestic issue that has shaped the Democratic presidential campaigns of 1992, 2000 and now 2008, both candidates are playing against type. Clinton is the risk-taker while Obama takes the more politically prudent route. Either way, something close to universal coverage will be high on the new president's agenda if the Democrats prevail in November.