From a nightmarish train voyage to a heartbreaking Russian romance, the Academy offers a strong and eccentric collection. 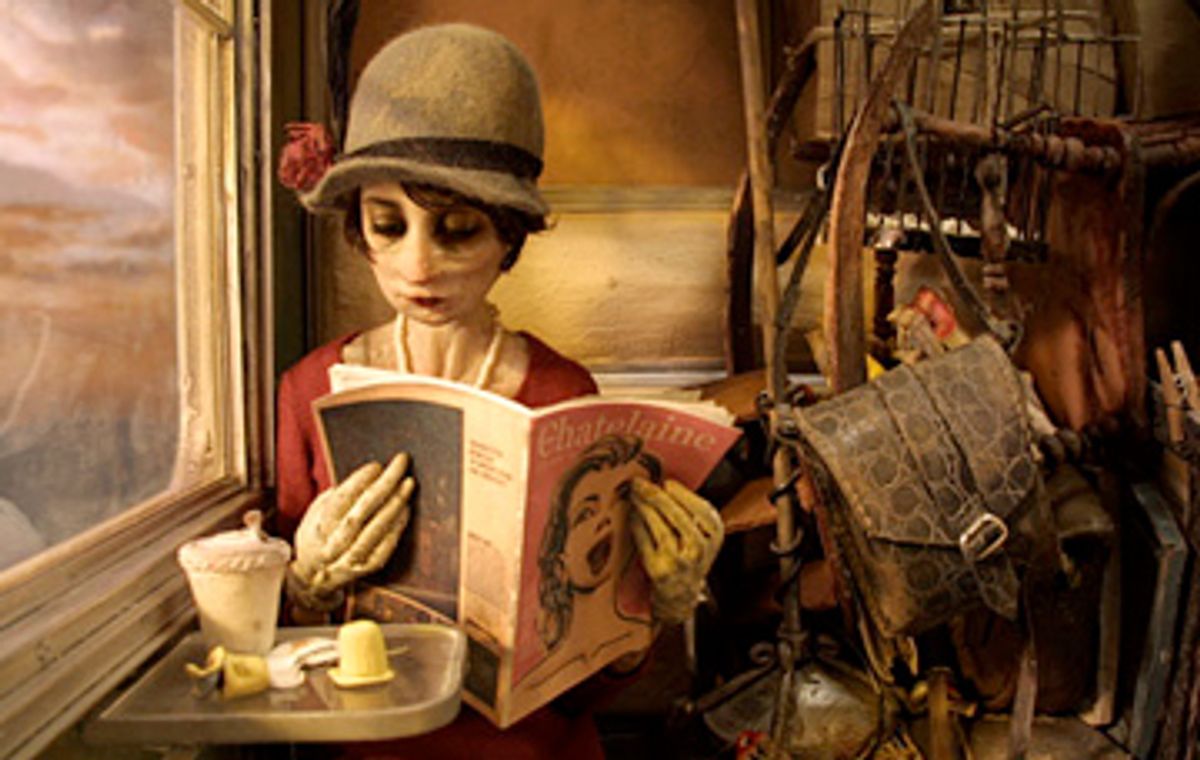 National Film Board of Canada

It's been years since any version of old-school cell animation dominated the Oscars, but this year's Academy Award-nominated animated shorts offer a particularly strong sampler of contemporary trends in the genre. As with the live-action shorts, it's not possible for five films to represent all possibilities, but all these are aiming higher than mere amusement, and three of the five are highly impressive. "Madame Tutli-Putli," a distinctive stop-motion film with the undertow of a bad dream, is probably the year's most influential animated short and the likely Oscar winner. But it isn't (in my personal and admittedly peculiar judgment) the best or most memorable movie on the dance card.

"Even Pigeons Go to Heaven" (France; directed by Samuel Tourneux) This amusing but slight 3-D computer animation seeks to tackle religious hypocrisy and the fear of death in just nine minutes, as a priest-salesman tries to push his magical "heaven machine" on a dying man. Lovingly crafted, with a nice switcheroo in the final scene, but not especially memorable.

"I Met the Walrus" (Canada; written and directed by Josh Raskin) Trippy and intriguing, this five-minute short transposes some '60s-style improvisatory scribble-animation on top of an audio interview with John Lennon, conducted by a Toronto teenage Beatle buff named Jerry Levitan in 1969. (Levitan produced this film.) It speaks well of Lennon that he let a strange kid into his hotel room for a serious chat -- of course, he was well known for his openness to fans -- and the feeling of you-are-there historical immediacy is irresistible. As a film, there just isn't much more to it than that.

"Madame Tutli-Putli" (Canada; directed by Chris Lavis and Maciek Szczerbowski) This startling stop-motion film, arguably the latest twist on the grotesque style of Czech maestro Jan Svankmajer or the Brothers Quay, is the talk of the animation world, and no wonder. Its aging-flapper protagonist, a strikingly lifelike cloth figurine -- as Stephen Holden of the New York Times remarks, she looks like Joyce Carol Oates -- takes far too much luggage with her on a ghostly train journey whose destination, it's safe to say, is not found on maps in our world. Her fellow travelers are ugly and farcical, at least until the whole voyage descends into symbol-ridden nightmare. Strange and evocative, "Madame Tutli-Putli" is unquestionably a signal accomplishment, although I found it thematically and emotionally impenetrable. Odds-on favorite to take the Oscar.

"My Love" (Russia; directed by Alexander Petrov) If animated films had existed in the 19th century, this is presumably what they'd have looked like. I'm sure that some animation enthusiasts will view Petrov's pseudo-Impressionist, painterly images as hopelessly corny. Too bad. To my taste, this surpassingly lovely tale of youthful passion -- inspired by, but not exactly based on, a Turgenev story -- is the standout work in this category. An aristocratic boy in pre-revolutionary Russia, besotted with literary romance and teenage hormones, is torn between a servant girl who adores him and the mysterious and alluring demimondaine who lives next door and never goes out without her blue-tinted sunglasses. Alternately warm and sarcastic, lyrical and nightmarish, Petrov's remarkable animations (which at different moments echo Monet, Seurat, J.M.W. Turner and Mediterranean landscape painting) capture the reckless, excessive spirit of young love with wit and candor. The boy loves both these women with an ardor they can't match, and the story ends heartbreakingly, in the only way it possibly could. This distinctive and beautiful film has the grandiosity, joyousness and expressive reach of a Russian novel or an Italian opera, in less than 20 minutes.

"Peter and the Wolf" (U.K.; directed by Suzie Templeton) The famous Russian folktale, as set to music by Prokofiev, gets a whimsical makeover in this witty and slightly dark stop-motion animation, completely without dialogue. Templeton's setting is contemporary rural Russia in all its shabbiness, and while her people are the standard big-headed figurines, the film's irresistible animals are mange-ridden furballs that look like well-loved stuffed toys abandoned too long to the weather. But the baleful, blank stare of her film's Wolf is nothing compared to the viciousness and hostility of the human characters whom brave and innocent Peter encounters, leaving no doubt where the real evil lies. This "Peter and the Wolf" is probably suitable for older children (as long as they can handle the sudden and shocking demise of Peter's beloved duck).