Same-sex couples fought for the right to wed. So why are they deciding not to get hitched? 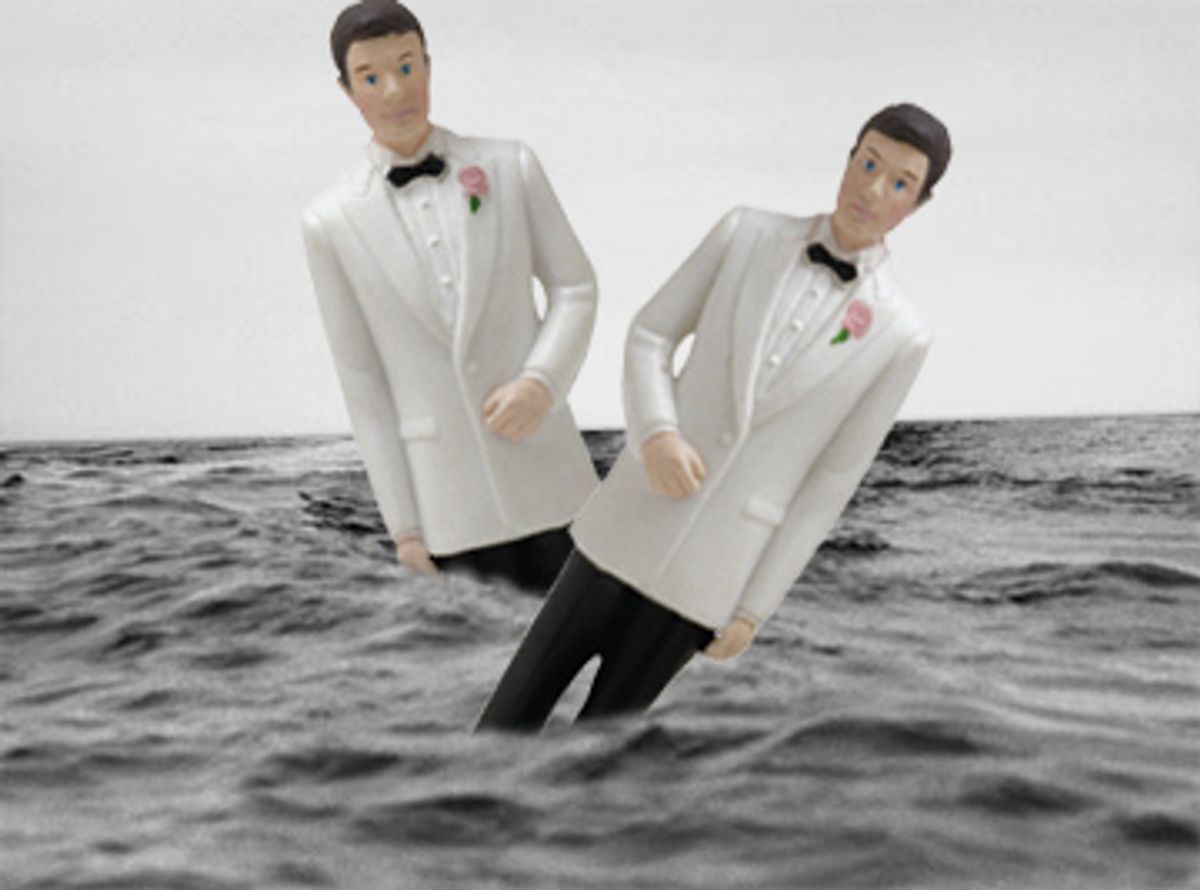 In May 2004, as Massachusetts became the first state in the country to legalize gay marriage, more than 1,000 gay and lesbian couples streamed into city and town halls.

"One small kiss for us, one giant kiss for mankind," said an ecstatic Erin Golden as she locked lips with her partner of 25 years, Eileen Counihan, on the steps of Provincetown Town Hall.

It was supposed to be a whole new era, as celebrations accompanied the adoption of civil union and domestic partnership laws in several states. But a funny thing happened on the way to the altar: Gay couples decided they might not want to get married after all.

So what happened? Gay couples are discovering the legal and financial drawbacks of marriage, for one thing, and the complications of letting the government get involved in your personal life. There's also a frustration about the current marital landscape -- with some states on board, others not, and the federal government standing on the sidelines.

Currently, only eight states allow same-sex marriage or marriage equivalents. Massachusetts is the only one to call it marriage, but New Jersey, Connecticut, Vermont, California and New Hampshire -- and, to a large extent, the District of Columbia and Oregon -- have all created their own brand of union, granting couples the same rights and responsibilities as married couples in those states -- minus the federal benefits. Maine, Hawaii and Washington also have gay unions, but with fewer rights than those afforded to married couples. (That may change in Washington shortly.)

"Personally, I'm holding out for real marriage, not the reconstituted variety," said Shawn Cowls, a 42-year-old insurance agent. "It connotes a second-class situation to me. What do you call us -- civil uniteds? Civil unionized? Civil union members? However you say it, it immediately implies 'people who aren't allowed to get married.'"

He's not alone. In Massachusetts, there are some 30,000 gay couples living together, yet as of April of this year, only 9,695 opted to tie the knot, according to census data and the Massachusetts Department of Public Health. And that includes the gay couples residing outside of Massachusetts who ran there to wed once the marriage laws passed.

Some same-sex couples, of course, never wanted to get married in the first place.

"For millennia, gay people have not had access to these institutions," said Joyce Kauffman, an attorney in Cambridge, Mass., who specializes in lesbian and gay family law. "And so to some people, marriage is anathema."

Kauffman, who is gay, was among them. She says women like her, feminists who came out during the women's lib movement of the 1970s, viewed marriage as oppressive. Now 57, Kauffman says she's since mellowed her stance, but plenty of gay women have not.

"For many of us, the idea of getting married sticks in your craw," she says. "Why would anyone want to get married? It's almost a visceral reaction."

But for others, the reluctance is based on discoveries of troubling financial downfalls.

"It's a difficult situation," said Jill Hollander, a financial planner based in Berkeley, Calif. "You're getting the responsibilities of the federal laws, but you're not getting the benefits."

There are some upsides to getting married -- getting onto a partner's health plan, creating a stronger legal framework for having children, cementing the relationship in the eyes of the courts.

But there are compelling financial reasons gay couples should remain single. For instance, in a divorce, alimony is normally tax-deductible for the person paying it and counted as income for the person receiving it. But because the Internal Revenue Service does not recognize gay marriage, alimony payments for same-sex couples could be treated as "gifts" and thus subject to taxes. The estate tax exemption that applies to married couples would also be a moot point. That is, in a heterosexual marriage, the surviving spouse pays no taxes on the estate. In a gay marriage, there would be no such exemption -- and an estate tax bill can be hefty.

Privacy has also become a sticking point for some. After all, marriage documents, domestic partnership registrations and civil union applications are all public documents. Not everyone wants to be outed -- say, those in the military or with immigration issues. In California, the list of domestic partnership registrants is not currently available online, but you can purchase it for $50.

Arlene Mose, a CPA in Pleasant Hill, Calif., said the tax and regulatory implications of domestic partnership (California's version of gay marriage) are so complicated, and the benefits so limited, that she and her partner of 15 years opted not to register. And that's true for most of her gay clients who are self-employed and not concerned about getting on their partner's health plan.

"There can be many advantages to being 'legal strangers,'" Mose said, adding, "The less government involvement in our lives, the better."

And if gay couples think the state is involved in their marriage, wait until they try to get divorced. Indeed, several divorce attorneys said gay couples who married and are now going through a divorce are often shocked to hear they may have to pay their former spouse alimony or be responsible for their debts. For some gay couples, divorce (and its unfolding nightmare) wasn't even on their radar.

Frederick Hertz, an Oakland, Calif., attorney who advises gay couples on marriage and divorce, says gay couples have always been more financially autonomous than their heterosexual counterparts, and some are simply not comfortable with the potential financial exposure that comes with being married. Hertz tells concerned clients they have two options to avoid this risk: Enter into a prenuptial agreement -- for a fee of $5,000 -- or simply don't register. Many opt for the latter.

But all of this applies to gay couples who can actually divorce. Given the convoluted gay marriage laws, which differ widely from state to state, attorneys say gay divorce promises to be a messy business. Those interviewed for this story say they receive calls and e-mails almost weekly from couples who "married" in one state and now live elsewhere and desperately want to get divorced. In Massachusetts, for instance, at least one party must reestablish residency in the state -- a process that takes a year -- in order to file for divorce. Divorce will be particularly problematic for couples who relocated to states that don't even recognize gay marriage. If a state doesn't recognize the marriage, it ain't going to recognize gay divorce.

Hertz says he gets e-mails all the time from people who have moved and now want out of their marriage. He puts them into two categories: those who lived in one state and moved, and those with the "Holiday Wedding Problem." That is, they married three, four, even five times, as each state passed its own version of gay marriage, and now they want to untie those knots.

Hertz tells them, "Get yourself a good lawyer."

The problem is, if gay couples can't find a way to untangle their unions, they won't be able to marry anyone else. At least that's the theory. In practice, many will, and they could wind up bigamists, he said.

"The bottom line is, states do not have to recognize a marriage if their state constitution has a Defense of Marriage Act included in it. And lots of states have that," Hertz said.

Thomas Curtiss Jr., a principal with the California law firm of Rodi Pollock Pettker Christian & Pramov, says he has a lot of gay clients, and only a small minority of them have registered as domestic partners. Curtiss himself, who is gay, says he wouldn't even consider it.

"My partner and I would never register, unless there was a real benefit," he said.

"I titled one of my speeches, 'Beware of What You Ask For,'" Curtiss said.

Caren Chesler is a freelance writer living on the Jersey shore. She writes about education, politics and finance. Her work has appeared in The New York Times, The New York Daily News, The New York Post, Investor's Business Daily and Bloomberg, among others.