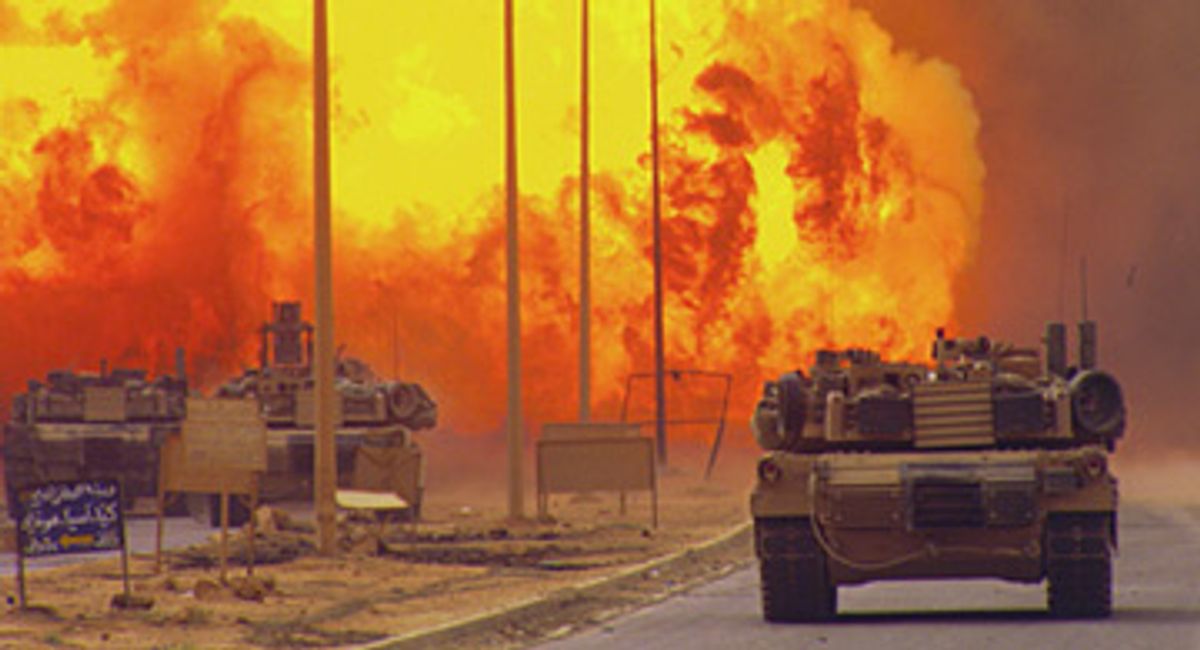 "No End In Sight"

Let me jump on the question of the day before Rush O'Hannity does: Why does Hollywood hate America? Actually, what I mean to ask is why the Academy Award nominating committee in the documentary-feature category hates America, but that's a long and confusing question. Maybe we'd better go back to Michelle Obama hating America. Now that I can explain.

Seriously, though, the docu-Oscar nominees of the last two years tell us something about how heartily sick of George W. Bush and his brilliant geo-strategic adventures even the constitutionally controversy-averse human beings of the movie industry have become. In the post-"Fahrenheit 9/11" era, documentaries have become the liberal riposte to right-wing talk radio, and Hollywood's establishment has pretty well embraced the trend. Lest you believe that nominating a lecture-demonstration by Al Gore, together with two Iraq-war films and a takedown of fundamentalist Christianity, last year was a fluke -- the films in question being "An Inconvenient Truth," "Iraq in Fragments," "My Country, My Country" and "Jesus Camp" -- I give you this year's list: three Iraq films and Michael Moore's takedown of our national healthcare scam.

Oftentimes the best-documentary Oscar seems like a foregone conclusion, because one film has a vastly higher commercial profile than others on the list. Certainly that was the case last year with "Inconvenient Truth" and the year before that with "March of the Penguins." This year's a murkier case. Moore's "Sicko" made more than 10 times as much money as the four other nominees put together, and is obviously the favorite. But have academy voters really forgiven Mike for his podium outburst five years ago, when accepting his "Bowling for Columbine" Oscar? Of course, that episode looks pretty different in the rear-view mirror. It was deemed divisive and unpatriotic to oppose the war in March 2003. But who, besides talk-radio ghouls and your dingbat Uncle Harry -- the one who's also been receiving secret signals from the Vatican through his gold fillings -- feels that way today?

So let's list "Sicko" as the morning-line favorite, if just barely, over Charles Ferguson's sober and superbly crafted "No End in Sight," the Iraq movie that lefty filmmakers love to hate. (More on that below.) Fortunately for me, I've already covered all five of the nominees in previous columns, so follow the links below for further reading.

"No End in Sight" (written and directed by Charles Ferguson) I've had several off-the-record exchanges with other filmmakers who feel bitter on various levels about the relative success of "No End in Sight": Ferguson is a wealthy filmmaking novice who solved his problems by pouring money on them (quite true), and he's an establishment insider who doesn't treat the basic idea of waging war with Iraq as morally repugnant (also true). It's up to people like me to point out those aspects of the film, clearly. But part of what made "No End in Sight" so fascinating was precisely the sense that it involved foreign-policy professionals, diplomats and military brass taking each other to task for a collective failure of enormous proportions, and no left-wing outsider could have gotten the material the way Ferguson did. "No End in Sight" also reached a near-mainstream audience in a way no other Iraq documentary has even approached, and the film's calmness and clarity only add to the force of its indictment. I won't be the least surprised if Ferguson goes home with the Oscar on Sunday night.

"Operation Homecoming: Writing the Wartime Experience" (directed by Richard E. Robbins) Based on a National Endowment for the Arts project encouraging soldiers to write about their experiences in Iraq and other combat zones, "Operation Homecoming" steers carefully between elements of outright dissent and those of gung-ho patriotism. But I'm delighted to see it nominated, especially considering it got a very modest theatrical release a full year ago. It's not quite like any other Iraq-war film, because it's based on recently returned soldiers -- along with vets of conflicts from World War II to the 1991 Gulf War -- discussing what they saw and did and felt in their own words. Don't miss the devastating poem by Brian Turner that ends the film.

"Sicko" (Written and directed by Michael Moore) If you don't have an opinion yet about "Sicko" or its director, or about America's corrupt and atavistic approach to healthcare, I'm not sure what to tell you. Along with Stephanie Zacharek's Salon review, you can read my coverage from Cannes last spring, where Moore was immortally described in a French newspaper as "le prolo-bobo de Flint en Michigan." A few of the customary mini-firestorms that follow Moore's work erupted around its release, but overall "Sicko" is the least controversial work of Moore's career, and the one least tainted by allegations of bogosity. (Did he really sail a boat from Florida to Cuba with a bunch of 9/11 relief workers? No, Mr. Limbaugh, he didn't; the boat thing was shtick, something you understand well.) It also made "only" $24 million, which is more than "Bowling for Columbine" but a lot less than its producers' "Fahrenheit"-inflated expectations. Still, Moore might be the only living documentarian who could make a film on this subject entertaining, and if he wins the Oscar, I say he's earned it.

"Taxi to the Dark Side" (written and directed by Alex Gibney) For my money the most shocking and important film to examine the American heart of darkness of the Iraq-Afghanistan era, "Taxi to the Dark Side" is only now reaching theaters beyond the big coastal cities, but could well prove too brutal (in its far-reaching implications, not what it depicts on-screen) for mainstream viewers. Digging beneath the surface of the torture and murder of detainees at Abu Ghraib, Bagram Air Force Base in Afghanistan and elsewhere, Gibney concludes that deliberately murky Bush administration policies are to blame, and that their conscious aim was to establish extra-constitutional authority for the president and to condition the American people to the idea that torture is normal and Muslim detainees have no rights. Gibney was nominated two years ago for "Enron: The Smartest Guys in the Room," and one of these years he'll win his Oscar. I just don't think Hollywood's ready for this one.

"War/Dance" (written and directed by Sean Fine and Andrea Nix Fine) This one's an absolutely classic docu-Oscar candidate, and as far as I know, its wrenching subject matter cannot plausibly be blamed on George W. Bush. Chronicling a group of poor kids from remote, war-battered northern Uganda as they excel in the national song-and-dance competition, "War/Dance" blends a highly allergenic stew of documentary ingredients: children, war, wrenching personal stories, a talent competition and blow-the-doors-off song-and-dance numbers. I felt occasionally suspicious of the children's articulate, rehearsed-sounding speeches, and I wish the film explained something, anything, about the social or historical roots of the Ugandan civil war. Eventually, I stopped resisting these unsinkable kids and the Fines' assured, professional direction -- and wait till you see the young xylophone virtuoso at work, or the dynamite ensemble version of the Bwola, ancestral dance of the Acholi people.