A non-paranoid's guide to superdelegates

Rather than an anti-Obama cabal, these Democratic insiders are the ultimate tiebreakers. 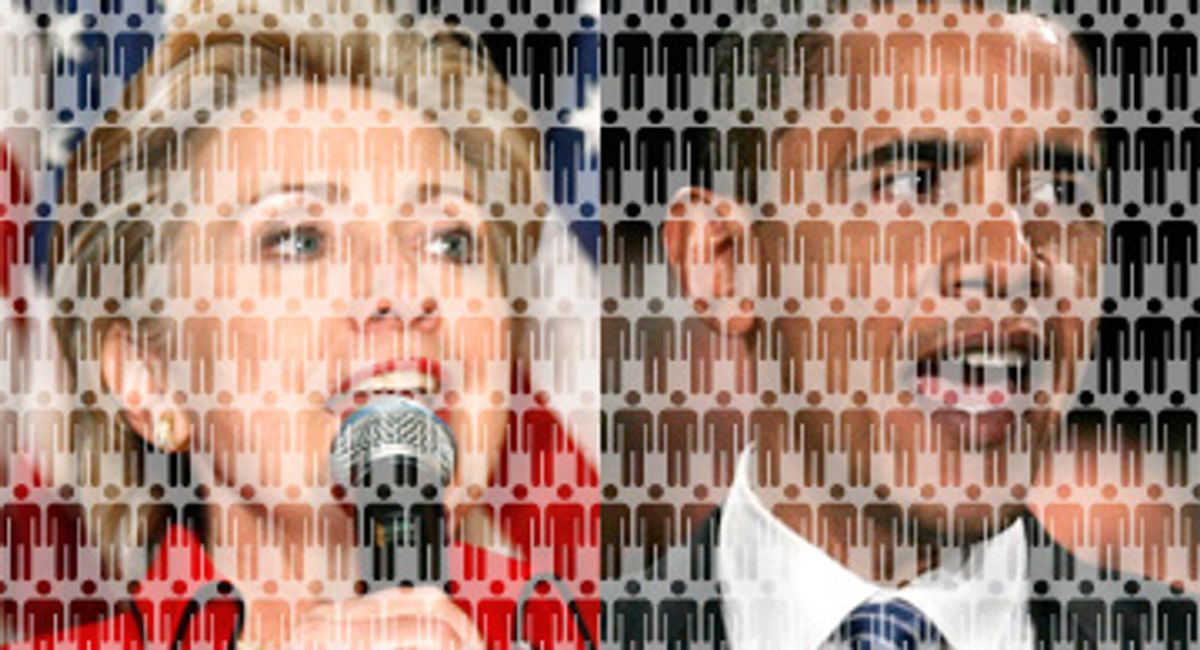 In political mythology, the Democratic Party's 796 "superdelegates" are often portrayed these days as strange visitors from another planet (one heavily populated with cigar-smoking political bosses) who came to earth with powers and abilities far beyond those of mortal voters. But instead of fighting for truth, justice and the American Way, these automatic superdelegates are angrily depicted as out to change the course of history by defying the will of the people and handing an undeserved nomination to Hillary Clinton.

These fears, emanating from passionate supporters of Barack Obama, are comically exaggerated. Rather than a cabal, the superdelegates (who will cast slightly fewer than 20 percent of the votes at the Democratic National Convention in Denver in late August) are mostly practicing and pragmatic politicians worried about getting out of step with their own constituents. (Here is the official list of these unpledged delegates, who are mostly members of Congress or the Democratic National Committee.)

While Clinton leads Obama by a margin of 241-to-181 among superdelegates, according to an Associated Press survey, the largest category of these political free agents are the roughly 300 or so who have yet to make (or, at least, announce) a decision. If the Obama-Clinton race goes down to the wire, the superdelegates inevitably will put someone over the top, since neither candidate has a pathway to get to the magic number of 2,025 with pledged delegates alone. Yet most of them are far from eager to flex their political muscles. In truth, the majority of the superdelegates, for all their purported bend-steel-in-their-bare-hands powers, are rather cautious as they wait and hope for a consensus to develop within the party about the nominee.

Take Bruce Braley, a first-term Iowa congressman, who had originally endorsed John Edwards before the opening-gun caucuses. Now, with Edwards out of the race, Braley is back on the fence and does not seem to be enjoying his perch one bit. "I don't want it to appear that I'm jumping on a bandwagon for some political benefit," he said Sunday in a telephone interview. "But at the same time, it's been something of a strain since I've received more arm-twisting since the Iowa caucuses than I ever did leading up to the caucuses."

Superdelegates have been an invisible part of the Democratic Party's landscape for more than a quarter-century. "Why have they lasted this long?" William Mayer, a political scientist at Northeastern University and an expert on presidential nomination battles, asked rhetorically. "The answer is because they haven't mattered. You can make an argument that they mattered in 1984, but then they were just ratifying the popular vote."

In 1984 -- the last time that the Democrats had a protracted and divisive nomination fight -- Walter Mondale earned about 600 more delegates than Gary Hart in the primaries and caucuses. But because there was a third candidate in the fray (Jesse Jackson), Mondale needed the support of more than 200 superdelegates to put him over the top. Anthony Corrado, who was tracking delegates for Mondale, said, "The choice was, are we going to have a brokered convention or are we going to bring the process to a close and start concentrating on the fall election?" Corrado, who now teaches government at Maine's Colby College, recalls with a laugh, "In 1984, there just wasn't much public discussion of superdelegates."

The superdelegates were created after the bitter Jimmy Carter-Ted Kennedy convention-floor fight in 1980. Elected officials, who had to endure the fallout from the presidential race but had no role in choosing a nominee, felt disenfranchised. As Louisiana Rep. Gillis Long, the chairman of the House Democratic Caucus, argued before a DNC reform commission in 1981, "We in the House, as the last vestige of Democratic control at the national level, believe we have a special responsibility to develop new innovative approaches that respond to our party's constituencies." (Elaine Kamarck, a lecturer at Harvard's Kennedy School and a current superdelegate, has posted online a highly useful history of these unpledged electors drawn from her 1986 doctoral dissertation).

This time around, though, a sense of illegitimacy surrounds superdelegates, as though there is something undemocratic about letting elected members of Congress and elected party officials vote on the convention floor. MoveOn.org has begun a petition drive demanding that superdelegates "let the voters decide between Clinton and Obama and then support the people's choice." There have been similar demands for the superdelegates to play robot and follow the vote of their congressional districts or states. (Of course, no one has explained what should happen when a state goes in one direction and a particular congressional district goes in another.) The Clinton campaign, which is far from a neutral arbiter, has had great fun in pointing out that this kind of voter sovereignty would force Ted Kennedy and John Kerry, both active Obama supporters, to back Hillary at the convention since the former first lady won the Massachusetts primary.

Democratic Party rules, however, have eliminated any sort of bound delegates, since even those selected in primaries and caucuses are theoretically free to exercise independent judgment at the convention. Former North Carolina Gov. Jim Hunt, who headed the reform commission that created superdelegates, stressed in 1981, "We must also give our convention more flexibility to respond to changing circumstances and, in cases where the voters' mandate is less than clear, to make a reasoned choice." This time around, Braley, whose northeastern Iowa congressional district went for Obama with a plurality in the then multi-candidate race, believes that these voter sentiments are "a significant factor." But he carefully adds that "just like I vote in Washington, I don't abdicate that responsibility totally to my constituents."

Friday the Obama campaign issued a press release announcing that Leon Lynch, a former Steelworkers official from Pittsburgh who serves on the DNC, had endorsed the Democratic front-runner. In an interview, Lynch said he was heavily influenced by Obama's recent winning streak: "If that many primaries and caucuses wanted to have him as the leading candidate, why should I not join in that?" Of course, Lynch's own state of Pennsylvania holds its primary in late April. So, I asked, why not wait for the verdict of your home-state voters? "If Hillary doesn't take Texas and Ohio, she's pretty much out of it," Lynch replied. "I assume that Pennsylvania wouldn't even count under those circumstances -- and I don't want to be in a position where I don't count."

The logic behind the existence of superdelegates is that if someone has to step in to resolve a deadlock, it probably should be those with the most stake in the future of the party. Kamarck, a former aide to then-Vice President Al Gore and an at-large member of the DNC who has endorsed Clinton, said, "The only way that the superdelegates really will come into play is in a situation where it can be argued that for some reason the voters did not decide -- and they essentially produced a tie. The definition of that tie can be all over the place. It could be someone having the lead in actual primary votes but being behind in pledged delegates."

Virtually the only scenario left for Clinton to create such a tie is by winning pretty much every major primary (Ohio, Texas, Pennsylvania and North Carolina) remaining on the Democratic calendar. Even then, due to the Democrats' rules mandating proportional representation, she probably would not catch up to Obama in pledged delegates. (CNN's tally gives Obama a 142-delegate lead from the primaries and caucuses.) But if Clinton ended the primaries with a closing kick, she would have other arguments in her favor based on having won a majority of the national popular vote and having carried every major state in the nation aside from Obama's home of Illinois.

American democracy has always had built-in tiebreakers. The Constitution states that the House of Representatives (and not, by the way, the Supreme Court) takes responsibility if no presidential candidate wins a majority in the Electoral College. If the Senate is deadlocked, the vice president is empowered to cast the deciding vote. In Democratic presidential nomination fights, the coin flip is, in essence, in the hands of the superdelegates.

Braley, who won a Republican-held House seat in 2006, is emblematic. As he puts it, "With the rules we're currently operating under, my role and my responsibility are to make the best choice possible for my party and my country when I go to Denver in August." If Democratic voters end up evenly divided between Obama and Clinton, the buck has to stop somewhere. And since the purpose of a political party is to win elections, it makes sense in this narrow set of circumstances for candidates like Braley, who will be on the ballot in November, to decide whom they would rather run with at the top of the Democratic ticket.