It's OK to vote for Obama because he's black

I'm voting for Obama because he's qualified, charismatic and progressive -- but his blackness seals the deal. 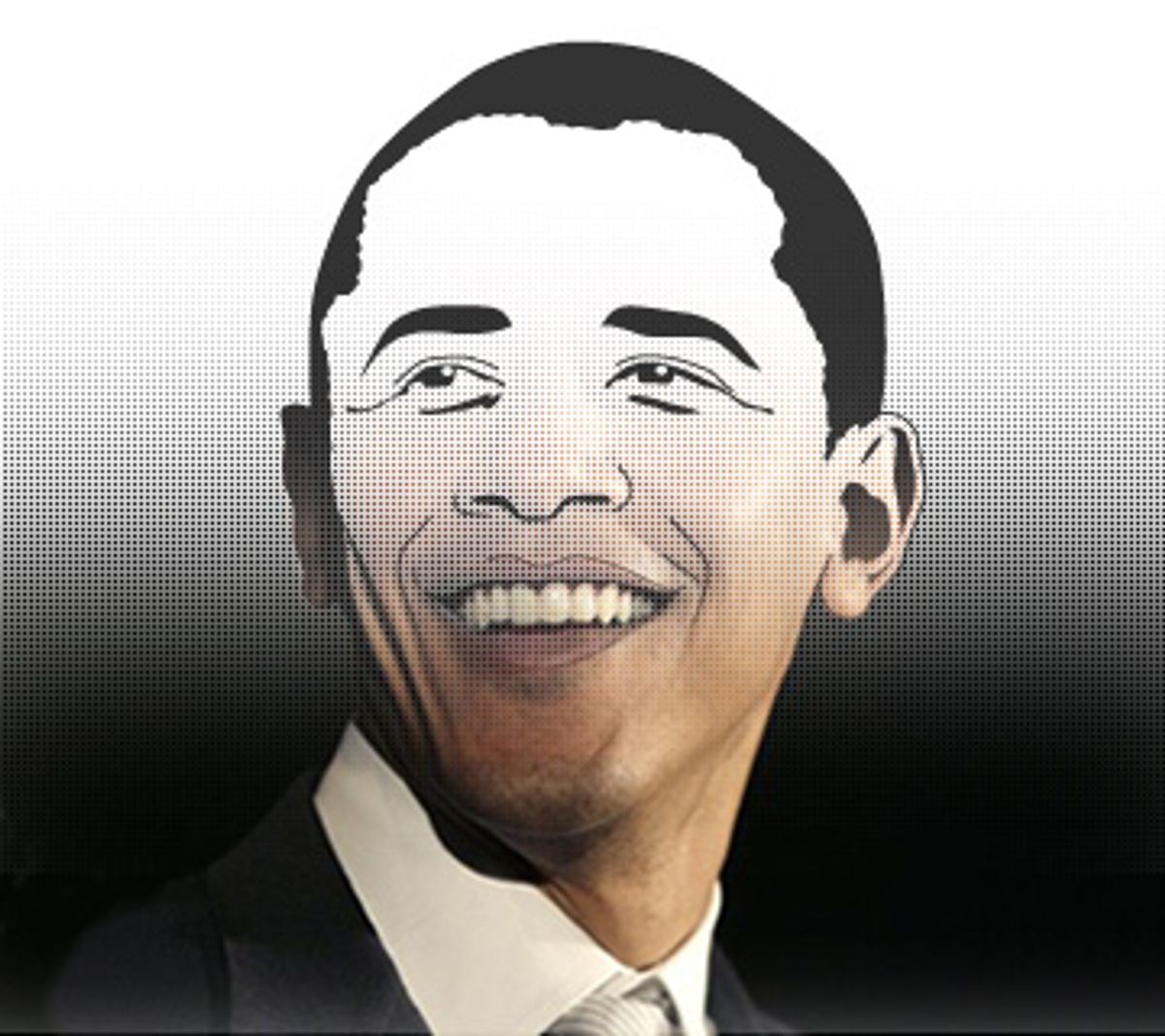 I admit it: I'm voting for Barack Obama because he's black. Yes, I'm voting for him because he's qualified, intelligent, charismatic and competent -- and because unlike Hillary Clinton, he opposed the Iraq war from the beginning. But if he weren't black, and Hillary had opposed the war, I'd probably vote for her because of her greater experience. In any case, it's a moot point, because if Obama weren't black, he would not be the Democratic front-runner.

I believe that most of Obama's supporters are voting for him for the same reason. Like me, they're drawn to his idealism, his youthful energy, his progressive politics. But it's his blackness that seals the deal.

And that's OK. In fact, it's wonderful.

There's a lot of resistance to this idea, and a lot of discomfort about even expressing it. In online discussions, many whites vehemently deny that Obama's race played any role at all in their decision to support him. They insist that his color doesn't matter, that they decided to support him simply because he's the best candidate.

This reaction is understandable. It feels more racially enlightened. To baldly proclaim that you support Obama because he's black seems to diminish his real qualities and achievements -- his stellar academic career, his work in the urban trenches, his liberal voting record, his ability to inspire. Foregrounding Obama's ethnic heritage implies that you're unhealthily obsessed with race, and make artificial decisions based on it. It can be seen as patronizing, as a merely sentimental, pie-in-the-sky gesture.

Unable to directly challenge Democratic voters' race-driven enthusiasm for Obama because that would make her look racially insensitive, Clinton's attacks on Obama as a false messiah covertly echo this theme. "Now I could stand up here and say, 'Let's get everybody together, let's get unified, the sky will open, the light will come down, celestial choirs will be singing,'" she said sarcastically Sunday in Rhode Island. "'And everyone will know we should do the right thing, and the world will be perfect.'"

Neocon pundit Bill Kristol, whose unerringly wrong track record on Iraq earned him a spot on the New York Times' Op-Ed page, joined Clinton in bashing Obama as a bogus messiah (also without mentioning race). In his Monday column, Kristol wrote, "[T]he effectual truth of what Obama is saying is that he is the one we've been waiting for."

Some critics who directly acknowledge the racial nature of Obama's appeal have argued that the wave of white support for Obama bespeaks not a genuine desire to bridge the racial divide but a bad-faith attempt to escape into some post-racial never-never land. David Ehrenstein, who is black, wrote a widely discussed column last year in the L.A. Times in which he argued that Obama's appeal derives from his role as the "Magic Negro," a benign, unthreatening figure who suddenly shows up to offer racial absolution to mildly guilty whites. "The less real he seems, the more desirable he becomes," Ehrenstein writes. "If he were real, white America couldn't project all its fantasies of curative black benevolence on him."

Some conservatives, not surprisingly, have blasted the racial component of Obama's white support, seeing it as a kind of affirmative action for undeserving minorities. A post on the right-wing site Townhall.com excoriated Democrats for treating the campaign like an affirmative action program, handing a "completely unqualified" candidate the nomination "because he's part of a minority."

All of these criticisms, whether they acknowledge it or not, are based on the fact that Obama's blackness is his indispensable asset. Without it, he would not have a snowball's chance in hell of being elected president.

Let me be absolutely clear: This does not mean he's not qualified. He is -- and if he weren't, he wouldn't have a chance to be elected either. I support Obama for a lot of reasons that have nothing to do with his race. I want to take a chance on a younger candidate who is less entrenched with special interests. I've had enough of the Bush/Clinton dynasties. And, above all, I support him because he was opposed to the Iraq war, and will turn decisively away from the disastrous militarism and ideological extremism of the Bush years.

But if Obama were a white junior senator from Illinois with the same impressive personal and professional qualities -- the same intelligence, empathy, speaking skills, legislative tenure and life story -- there'd be no way he'd have the name recognition to mount a major campaign in the first place. And if he did manage to run, it's unlikely he would have inspired such a passionate and widespread following.

Obama's charisma, which is his unique political strength, is real, but it cannot be separated from the fact that he's black. When Obama speaks of change and hope and healing divisions, his words carry an electric charge because of who he is: He embodies his own message, the very definition of charisma. As a black man offering reconciliation, he is making a deeply personal connection with whites, not merely a rhetorical one.

So white enthusiasm for Obama is driven by his race. But there's nothing wrong with that fact. Those who criticize it are simultaneously too idealistic and too cynical: They assume that it's possible to simply ignore Obama's race, while also imputing unsavory motivations to those who are inspired by it. The truth is that whites' race-driven enthusiasm for Obama is an almost unreservedly positive thing -- both because electing a black president is a good thing in its own right, and because of what that enthusiasm says about race relations in America today.

Yes, there can be a touch of bathos and self-congratulation in white Obama-mania. But so what? Great historical shifts are often accompanied by such feelings. Besides, sincerity and sentimentality are not mutually exclusive. Barack is no Magic Negro. The truth is, the more white voters find out about Obama, the more they like him. His story and personality resonate with whites. Obama has been able to bridge the gap between white America and black America because figuratively and literally, he's both black and white. Because of his personality, he's the perfect racial go-between: His nonthreatening demeanor allows him to connect with whites, while the fact that he's black -- and proudly and avowedly so -- makes that connection feel racially redemptive.

As for the right-wing dismissal of Obama as an unqualified recipient of a national affirmative action program, that argument is absurd because Obama is qualified. If he is indeed the beneficiary of a kind of affirmative action, it is one that he earned, and that is given freely -- it isn't mandated or coerced. White Americans have been waiting for a chance to bridge the racial divide, to affirm a universalist ethos. Obama has tapped into that need, and it turned out to be a gusher.

It's true that voting for Obama is in some ways a symbolic gesture, one that won't instantly solve America's race problems. But it will help. Symbolism is powerful. The racial politics that started at the symbolic plane can and will trickle down to real people. Having a black president would give the country a deeper comfort level in talking about racial issues. It would help Americans of all races break out of the sterile guilt/victim dialogue, or the fear of falling into it, that too often inhibits real communication. It could radically change our entire racial landscape, in ways we can't even predict.

And an Obama presidency would have far more than symbolic impact on America's race problems. Who doubts that Obama, a staunch liberal and former Chicago community organizer, will move aggressively and creatively to address the critical problems of black poverty and violence? And that when he appeals to black responsibility and self-empowerment, his words will have a million times more impact than when they come from a white Republican?

Many dismiss the Obama phenomenon as a mere "cult of personality." It is in some ways a cult, but not one of personality -- it's a cult of racial healing, of racial transcendence. For many whites, voting for Obama is a kind of appeal to one's better self, and the better self of the country. It is, in a way, a promise. It could even be seen as a kind of prayer.

Of course, Obama-mania can be accompanied by lightheadedness, irrational euphoria and giddiness. The post-racial sky will not open. There are limits to charismatic politics. And there will no doubt be an Obama hangover if he is elected.

Barack Obama is not a savior. But there's every reason to believe that if elected he will be a good president -- and maybe a great one. And every day that Obama is in office, even the bad ones, we'll be able to tell ourselves: We elected a black man president of this country. That thought, with all that it says about where we came from as a nation and where we hope to be going, will be a light that no one can put out.