The "father of modern conservatism," dead at 82

William F. Buckley declared war on the political left during Vietnam and the civil rights era. But even he rejected the extremism of George W. Bush. 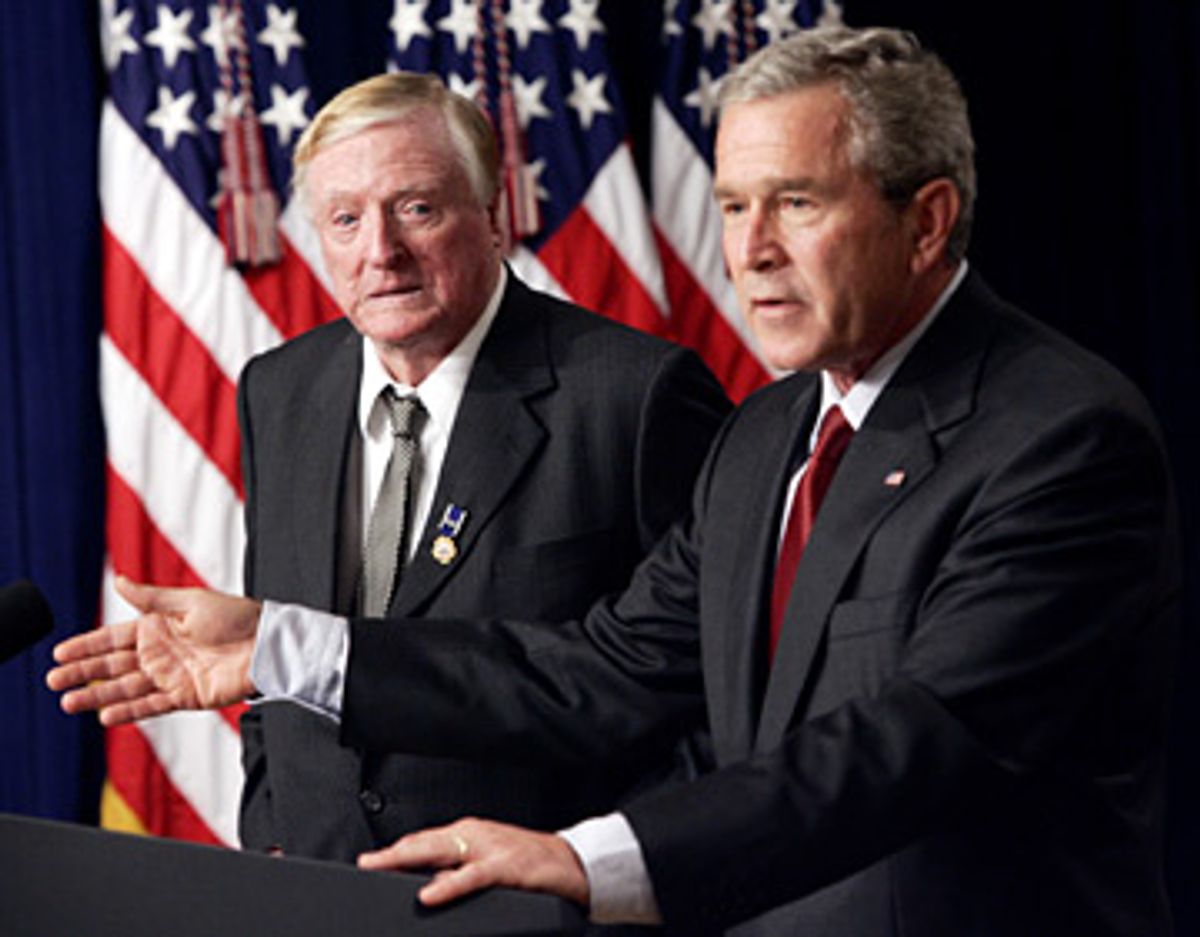 William F. Buckley, the so-called father of modern conservatism and founder of the National Review, died this morning at the age of 82. Born to great wealth and privilege, with a conservative oil baron father determined to provide him with every advantage a child can have, Buckley made the most of those opportunities. Following a childhood filled with private tutors and exclusive European boarding schools, Buckley graduated from Yale University, where he was chairman of the Yale Daily News and a member of Skull & Bones.

After Yale, he proceeded to shape and drive political conservatism in America with more influence than any figure with the possible exception of Ronald Reagan. Buckley epitomized some of the worst excesses of political conservatism, as a leading proponent of the Vietnam War, one of the nation's most vociferous Cold Warriors, and a vocal opponent at times of both the feminist and civil rights movements. Yet he also aggressively, and successfully, sought to expel extremists, such as John Birch Society adherents, from the conservative movement, and deviated from conservative dogma with some frequency, such as the support he voiced for Jimmy Carter's decision to give the Panama Canal back to Panama. While Buckley remained a highly controversial and divisive figure, his influence on American political life was unquestionably enormous.

The political right excels at using the deaths of its political leaders to sanctify its ideas. The intense, weeklong canonization of Ronald Reagan following his death was the template for that exploitation, and the same process with Buckley is already well under way. Today's conservatives will celebrate Buckley as an icon of modern conservatism, the epitome of their belief system. But this ritual will obscure a deeper truth: Buckley bears little resemblance to the modern-day, Bush-era "conservative" movement, and, particularly in recent years, he began making his opposition to it more explicit.

The split between Buckley and the Bush-led right was perhaps most vivid when it came to the war in Iraq, the defining belief of today's conservative movement. In December 2005, Democratic National Committee chairman Howard Dean generated intense outrage on the right when he compared the Iraq war to Vietnam and said: the "idea that we're going to win the war in Iraq is an idea which is just plain wrong." That statement produced limitless recriminations from conservatives, with Michael Reagan, son of the former president, actually calling for Dean's hanging as a traitor as a result of Dean's statements: "Howard Dean should be arrested and hung for treason or put in a hole until the end of the Iraq war!"

But Buckley, a mere eight weeks later, echoed Dean's comments almost verbatim while writing about the war in National Review: "One can't doubt that the American objective in Iraq has failed," Buckley declared. "Our mission has failed because Iraqi animosities have proved uncontainable by an invading army of 130,000 Americans." He urged the Bush administration to consider "acknowledgment of defeat." In an earlier November 2005 interview with the Wall Street Journal -- on almost the same exact day Dean made his comments -- Buckley went even further, declaring that the invasion of Iraq was "anything but conservative."

Buckley explicitly distinguished the conservatism he founded from what it had become under the Bush-led Republican Party. In July 2006, he told CBS Evening News that "Mr. Bush faces a singular problem best defined, I think, as the absence of effective conservative ideology." And he specifically identified the war in Iraq as a major cause of the nation's problems, arguing that the war was such a failure that it had single-handedly rendered the Bush presidency a failure: "If you had a European prime minister who experienced what we've experienced it would be expected that he would retire or resign."

On one key issue after the next, Buckley came to reject the defining principles of today's conservative movement. In the same CBS interview, he rejected the neoconservative approach of belligerence toward Iran and, more generally, labeled as "too ambitious" the sweeping vision of democracy promotion set out by Bush in his second Inaugural Address. In a subsequent interview, Buckley warned: "The neoconservative hubris, which sort of assigns to America some kind of geo-strategic responsibility for maximizing democracy, overstretches the resources of a free country.''

New Republic writer Johann Hari went undercover on a National Review cruise in 2006 and detailed a bitter argument that broke out between Buckley and neoconservative icon Norman Podhoretz. After listening to the two right-wing elders bicker on virtually every foreign policy issue, Hari concluded: "Podhoretz and Buckley now inhabit opposite poles of post-September 11 American conservatism."

Nonetheless, there is no question that the bulk of adherents to the conservative movement that Buckley founded now side with Podhoretz, not with Buckley. As Hari reported, the crowd cheered loudly for Podhoretz, and not for Buckley. One of the National Review cruise member seated at Hari's table scoffed that Buckley's refusal to fight Muslim terrorists made him a "coward," while his wife dismissed Buckley as nothing more than an "old man," and then "tapped her head with her finger to suggest dementia."

Indeed, while the allegedly epic and all-consuming nature of the so-called war on terrorism has become the central, overarching theme of Bush-era conservatism, as well as of the magazine he founded, Buckley was clearly uncomfortable with, even hostile to, such a grandiose vision of this conflict. When asked by the WSJ whether this "war" was comparable to the "long twilight struggle" of the Cold War -- the ideological battle that was Buckley's bread and butter -- he refused the comparison, dismissing away the threat posed by Muslim radicals on the ground that they "lack the resources" to truly threaten the U.S.

Although the postmortem iconography of Buckley as the Ultimate Conservative will attempt to obscure these developments, it became an increasing source of embarrassment and discomfort that the political movement of which he is deemed to be the "father," and even the magazine he founded, came to bear so little resemblance either to Buckley's style or substance. The erudite and civil debates that Buckley famously engaged in with the likes of Gore Vidal and Noam Chomsky are about as far removed as possible from the shallow, anti-intellectual screeching found in today's National Review from the likes of Kathryn Jean Lopez, Jonah Goldberg and editor Rich Lowry. And as Buckley's heresies became more numerous and pronounced, right-wing pundits such as popular blogger Ed Morrissey began actually dismissing Buckley's conservatism as an obsolete relic of the pre-9/11 past, claiming that the profound lessons of 9/11 are what account for "the difference between traditional conservatives and the Bush Administration's efforts in foreign policy, along with a host of other arenas."

To be sure, many of Buckley's original principles are still central prongs in the conservative movement, including his fierce opposition to taxes, his reflexive defense of the right of the U.S to use military force against other countries, and his Catholicism-inspired opposition to a woman's right to choose. Buckley remains responsible for the remaining though dwindling beliefs held in common between Goldwater/Reagan conservatives and the Bush-era movement on the right.

But in both style and substance, the Limbaugh-Coulter-Kristol-National Review-led conservative movement of today bears little resemblance to what Buckley spent most of his adult life developing and creating. Modern conservative polemicists continue to use Buckley as a symbolic prop behind which they march -- and that exploitation will intensify by many magnitudes now that he has passed away -- yet, as Buckley himself increasingly recognized, today's conservatives repudiate and violate much of what Buckley stood for and believed.