Flower in the junkyard 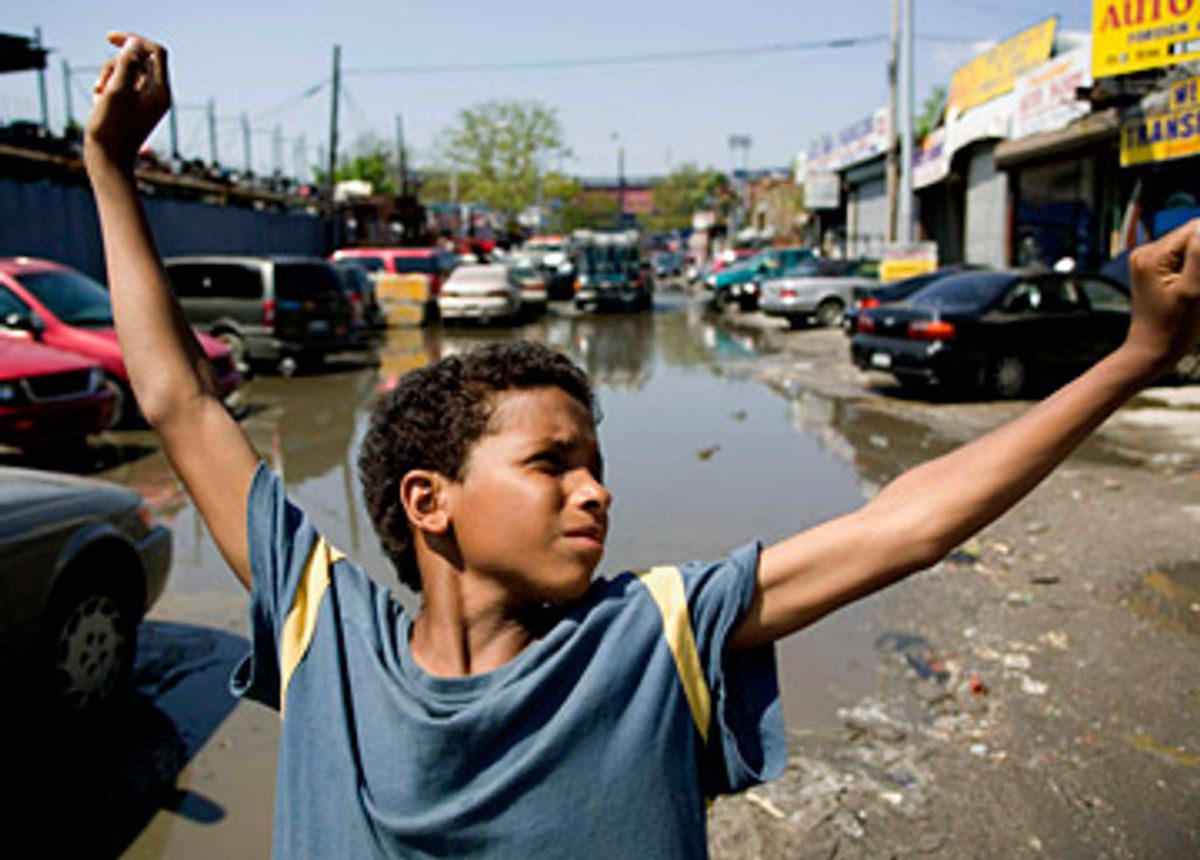 If you own a car and you live in or around New York City, you've at least heard about the Iron Triangle of Willets Point. Not because it's a zone of spectacular urban blight right in the middle of the continent's richest and most expensive city -- although it certainly is -- but because it's where you can get your dents banged out, your windshield replaced and your muffler repaired at rock-bottom prices, at least if you're paying in cash and you're not too concerned about things like receipts and warranties. This dilapidated and disreputable 20-block stretch of junkyards and body shops, some of it actually unpaved streets, sits in the shadow of Shea Stadium (home of the New York Mets) and the National Tennis Center (home of the U.S. Open); except for those points of reference, it's barely plausible as the United States.

It's oversimplifying Ramin Bahrani's extraordinary film "Chop Shop," which was showered with love at Cannes, Berlin and Toronto and is finally getting a small-scale American theatrical release, to say that Bahrani sees the Iron Triangle as the place where the American dream goes to die. He never judges the place or its people, who are neither heroes nor villains. You could just as easily say that "Chop Shop" is a classic American fable of immigrant pluck and zeal, of an innocent swept away in the undertow of capitalism, fighting like hell to keep his head above water.

There's anger and ingenuity and joy and a capacity for dreams in Alejandro (Alejandro Polanco), Bahrani's 12-year-old protagonist, but there's barely a micron of self-pity or victimhood. He works prodigiously hard at reeling in potential customers off the chaotic Queens streets, he works hard at learning to paint cars, and he works hard at stealing their hubcaps. (We have the blindingly stupid idea in this country that those who work hard are morally superior to others, when evidence to the contrary is all around us.) There's something of the young Vito Corleone in Ale, and something of Saul Bellow's Augie March: "I am an American ... and go at things as I have taught myself, free-style, and will make the record in my own way: first to knock, first admitted; sometimes an innocent knock, sometimes a not so innocent."

But if the story of Ale's life in a plywood-paneled room atop a Queens body shop, a room he shares with his gorgeous 16-year-old sister (Isamar Gonzales), who makes her own way in the world just as gorgeous older sisters have been doing since forever, is an American parable, Bahrani's movie is something else again. It's a near-masterwork of low-budget precision and improvisation, constructed and rehearsed over many months in collaboration with the actors and the entire Willets Point community. Ale's boss in the film is played by Rob Sowulski, the real-life proprietor of the Iron Triangle garage where the movie was shot. (Furthermore, he's terrific.) Polanco and Gonzales, who both play characters with their own names, are not really brother and sister, but they attended the same Manhattan school and knew each other well. I wouldn't say either one is destined for stardom, but that's not the point of "Chop Shop," which has an intimate, unforced quality that defies description and defeats emotional resistance.

"Chop Shop" has a plot, but it doesn't entirely reside in the actions of the characters or the events we witness. Ale's plan to buy a third-hand food-service van (aka "roach coach") and set up a sandwich business with his sister runs aground. He finds out for sure what Isamar does when she spends long hours away from the shop at night. He commits various crimes, learns to paint cars, fights and makes up with his best friend Carlos (Carlos Zapata). But we never learn how Ale and Isamar have wound up here, or where their parents have gone, or any of the other back-story details a normal movie would fill in while yanking our emotional chain mercilessly. They're here, that's all, and they're doing what anybody would do, taking care of themselves as best they can. As Ale says to Isamar accusatorily one night, while he's heading out to sell bootleg DVDs on the street: "I'm working! You should be working too!"

Two obvious points of reference for Bahrani's economical, deceptively subtle direction (the meticulous cinematography is by Michael Simmonds), and the way he builds dramatic tension and meaning from apparently insignificant fragments, are Robert Bresson's "Pickpocket" and Vittorio de Sica's "The Bicycle Thief." I know, that's a hell of a lot for a movie by a 32-year-old unknown to live up to, but I haven't seen an American film in many years that so clearly rates the comparison. Both of those are more plot-driven than "Chop Shop," actually, and it's also tempting to see the influence of recent Iranian cinema, with its tendency to rely on poetic ambiguity rather than dramatic revelation, in Bahrani's work. (He was born in North Carolina but lived for a few years, as an adult, in his parents' homeland.) Whatever its artistic roots may be, "Chop Shop," along with Bahrani's almost-undistributed debut, "Man Push Cart," announces the arrival of a director radically out of step with the dominant conventions of American moviemaking, one who blends a social-realist vision and a passion for cinematic poetry.

"Chop Shop" is now playing at Film Forum in New York. Other engagements will follow.