No Hail Mary for Hillary

The final Democratic debate produces no miracles for the grouchy former front-runner. Yes, those MSNBC moderators did seem to like Obama better, but even when she's right she sounds wrong. 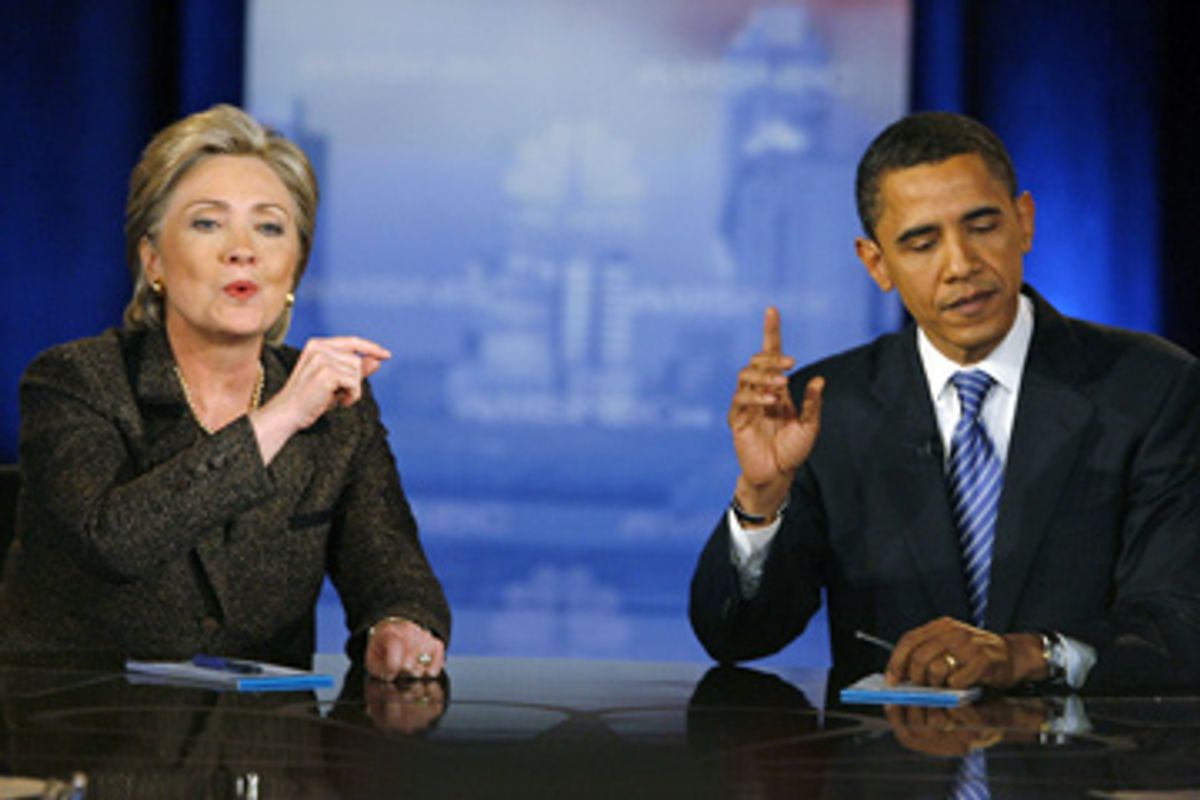 All the gripes from Hillary Clinton's campaign about press coverage seemed to be completely, definitively validated midway through Tuesday night's debate -- at the instant when Brian Williams, intending to throw Barack Obama a hardball, instead accidentally cued up a tape of Clinton mocking him, and then asked Obama, "How were her comments about you unfair?"

The moment actually did seem to have come right out of the "Saturday Night Live" skit that ripped the moderators of last week's Democratic debate -- and everyone in the press -- for being overly, and overtly, pro-Obama. And if Clinton was as good at the human elements of politics -- the, well, likability stuff -- as she is at the policy end, she could have used yet another debate where the deck seemed stacked against her to win some serious sympathy from voters in Texas, Ohio, Rhode Island and Vermont, a week before the primaries that could end her campaign if they don't go her way.

But it was not to be. Clinton had, in fact, already complained about the moderators long before Williams handed Obama that gimme. And she did it so clumsily that it actually evoked boos from the crowd, audible even on MSNBC's feed. "Could I just point out that, in the last several debates, I seem to get the first question all the time?" she said, after a 15-minute exchange on healthcare where she mostly did well. "And I don't mind. You know, I'll be happy to field them, but I do find it curious. And if anybody saw 'Saturday Night Live,' you know, maybe we should ask Barack if he's comfortable and needs another pillow." By jumping the gun, and actually spelling out the "SNL" angle, Clinton managed to bring herself down from a beleaguered victim to a whiny grouch.

The debate was full of twists like that; at one point, Clinton appeared to whiff on a question about the soon-to-be president of Russia, answering -- correctly -- that his name is Medvedev, but so hesitantly, after a couple paragraphs of rambling about him, that it sounded like she got it wrong. As she has often been in this presidential campaign, she was her own worst enemy, when she needed, instead, to be perfect (and a few Obama mistakes wouldn't have hurt, either). It was the entire campaign encapsulated in a single debate -- the last one scheduled until the fall, if Clinton doesn't turn things around.

As for any Obama mistakes, they were hard to find. He nearly walked himself into trouble over the Rev. Louis Farrakhan, who announced over the weekend that he supported Obama, taking Tim Russert's bait by appearing unwilling to reject Farrakhan's support. (Many voters find Farrakhan repellent because of his past statements about Jews.) But when Clinton tried to slip the dagger in, ostentatiously pointing out that she refused the endorsement of the Independence Party in her 2000 Senate campaign because of its leaders' anti-Semitism, it backfired. Obama appeared to realize what he was doing, and managed to rescue himself from a blunder while sounding cool doing it. "I have to say I don't see a difference between denouncing and rejecting," he said, all but rolling his eyes at the entire line of questioning. "There's no formal offer of help from Minister Farrakhan that would involve me rejecting it. But if the word 'reject' Senator Clinton feels is stronger than the word 'denounce,' then I'm happy to concede the point, and I would reject and denounce."

Obama did seem to have a tough time steering as clear of condescending as his handlers would surely have hoped; he wasn't as blatant in his premature victory gloating as John McCain had been toward Mitt Romney at the last GOP debate, but it was sometimes close to the line. "Now, I have no objection to Senator Clinton thinking that her approach is superior," he said during the healthcare exchange. After Williams played the wrong clip, Obama's reaction was smugness -- "Well, I thought Senator Clinton showed some good humor there. I would give her points for delivery." (Clinton's reaction? Loud laughter.) Toward the end, he damned her with the faint -- for a Democrat -- praise that she'd be a better president than McCain and then seemed to bid her a cordial goodbye. "The one thing I'm absolutely clear about is Senator Clinton has campaigned magnificently," he said. "She is an outstanding public servant." Even his aides got into the act. Just before midnight, Obama's spokesman, Bill Burton, e-mailed reporters some quotes from analysts declaring Obama the winner that included the Clinton campaign's own, slightly less glowing compilation of praise for her at the bottom.

On substance, the two candidates again demonstrated why so many Democratic voters seem willing to go for style this year -- there's hardly any difference between them on policy issues, and the ones that do exist are minor. The entire healthcare debate turned into a yes-you-did, no-I-didn't stalemate over which candidate would impose more mandates in order to achieve the goal they both agreed on, providing universal healthcare. Clinton hammered at Obama's plan, which would leave 15 million people uninsured, and she blasted an Obama flier criticizing her own proposal. "In Senator Obama's mailing that he has sent out across Ohio, it is almost as though the health-insurance companies and the Republicans wrote it," she said. "I think it's imperative that we stand as Democrats for universal healthcare. I've staked out a claim for that. Senator Edwards did. Others have. But Senator Obama has not." But Obama blunted the attacks by playing up the vast areas where they agree.

They went back and forth over trade, but Russert, Williams and Obama put Clinton on the defensive over Bill Clinton's -- and, by extension, his wife's -- support for NAFTA. The deal was one of Bill Clinton's first big priorities in the White House, but now Hillary says she would revise it as president (and hints that she opposed it then). Again, Obama avoided giving Clinton any breathing room, by highlighting their essential agreement that the trade pact is flawed -- while pointing out her previous support. "I think actually Senator Clinton's answer on this one is right," he said, though he veered again toward condescension in the process.

It was on Iraq where their positions seemed most distinct. Fittingly, it was Clinton who underlined the distinction, reminding Democratic voters of one of the least popular lines on her résumé. After spending the entire campaign trying to escape the wrath of antiwar activists who can't forgive her 2002 vote to authorize the invasion of Iraq, Clinton steered the debate right back there at the very end, even though Obama had already slammed her for the vote earlier in the night. ("Once we had driven the bus into the ditch, there were only so many ways we could get out," he said, responding to her claim they had similar voting records on the war since he showed up in the Senate three years ago. "The question is: Who's making the decision initially to drive the bus into the ditch?")

But in the debate's final moments, asked what votes or positions they would each revisit from their entire career, Clinton couldn't help bringing up the 2002 vote once again. "Well, obviously, I've said many times that, although my vote on the 2002 authorization regarding Iraq was a sincere vote, I would not have voted that way again," she said. "But I think that this election has to be about the future. It has to be about what we will do now, how we will deal with what we're going to inherit." Why revisit the past again, then? It was yet another misstep by the candidate who started out with the race hers to lose -- and who, with a week to go before the March 4 primaries, suddenly looks like she might not be the one worrying about what the next president is going to inherit from George Bush, after all.