As underdogs, they embraced public financing. But now, as the likely nominees, they're looking longingly at millions in private contributions. 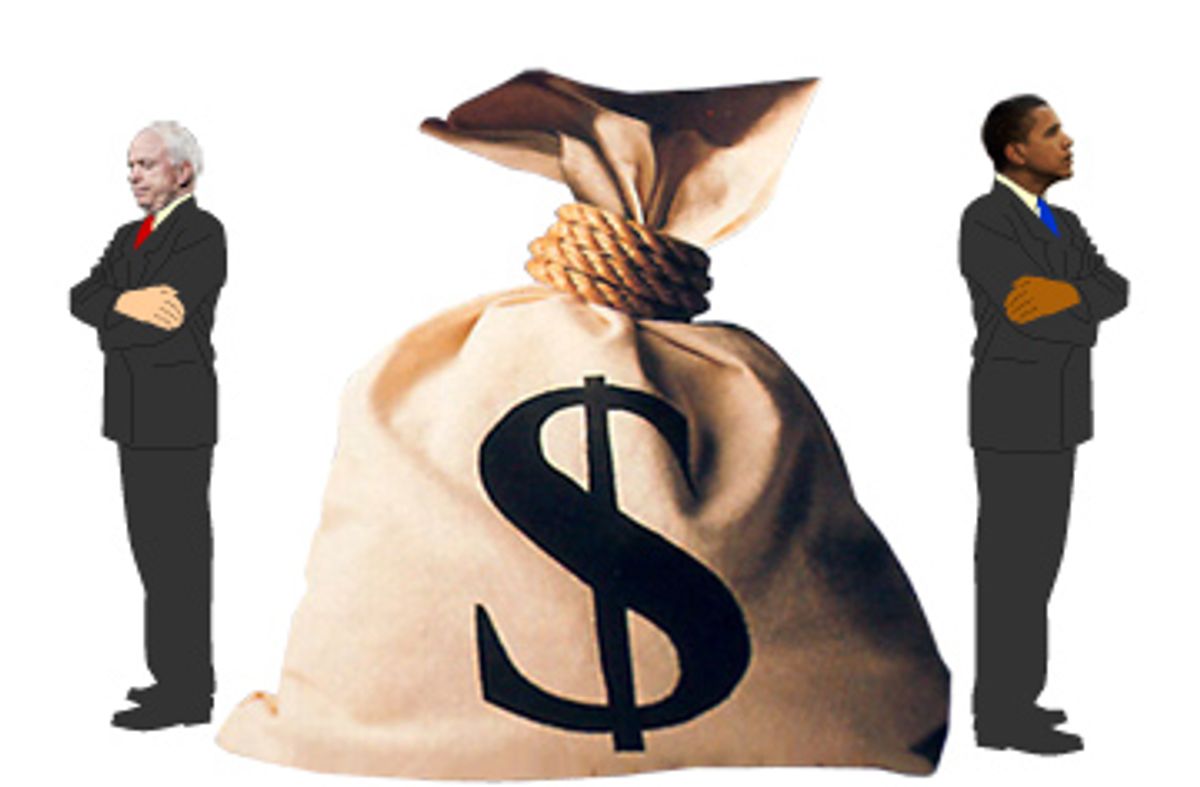 Barack Obama raised $36 million in January. John McCain took in a paltry $12 million. So it's not hard to see why McCain's campaign has decided to hound Obama about a pledge he made last year to stick to public funding in the general election if he wins the Democratic nomination. Forcing Obama to honor the pledge might be the only way McCain could stop his opponent from burying him under a pile of cash. What's a little more complicated is how McCain, whose maverick reputation rests, in part, on campaign finance reform, whose name is on the nation's most famous campaign-finance law, managed to lose the political high ground on that very issue before the end of February.

Months ago, when neither man seemed likely to emerge as his party's nominee, both Obama and McCain made tactical moves that could haunt them now. Obama -- at a time when Hillary Clinton was the inevitable juggernaut rolling back to the White House -- said he would stay in the federal public financing system if he did win the primary fight, as long as his GOP opponent did the same. McCain agreed immediately. The system gives candidates $85 million, funded by the $3 check-off fewer and fewer taxpayers choose to pay on IRS forms. But that's the only money candidates who take the funding can spend after the nominating conventions. They can't use campaign contributions from private donors. Now, awash in private contributions, Obama and his strategists are beginning to back away from his pledge to rely solely on public money. Pressed on the issue by moderator Tim Russert at Tuesday's debate, Obama refused to restate his commitment.

McCain, meanwhile, took out a loan last fall that saved his campaign, giving him the money he needed for a last-ditch effort to win New Hampshire. He also declared himself eligible for a different public-financing program that gives candidates matching funds, keyed to the level of their private fundraising, for primary campaigns -- and imposes strict spending caps in the process. Now that his financial picture has improved, he's announced he won't take the primary matching funds. But the head of the Federal Election Commission (a longtime critic of McCain's campaign finance reforms) said last week that McCain may still be locked into taking the matching funds anyway.

That gave Democrats an opening to accuse McCain of reneging on his own promise to rely on public financing. "It's a little ironic that we're getting lectured about campaign finance from a guy who got a letter from the FEC saying they believe he's in the public financing system and he's actually spent the maximum," Obama strategist Robert Gibbs told me last week.

Actually, Obama may deserve the lecture. In February 2007 -- two weeks after he announced his campaign -- he asked the FEC if he and a theoretical Republican opponent could declare a spending truce, enter the public financing system and return campaign contributions. The commission said that would be fine. Still well behind Clinton in most polls, Obama stuck with the idea in late November.

Since then, Obama's gone on to raise more money than any presidential candidate in history, pulling in small online donations so fast that the Internet is like his personal ATM. This week, his campaign announced it had gotten donations from 1 million people. Obama said in Tuesday night's debate with Clinton that he's effectively already got public financing. "We have built the kind of organization that is funded by the American people that is exactly the goal and the aim of everybody who's interested in good government and politics that works," he said.

So that $85 million for September and October suddenly doesn't seem like so much when you're raising as much or more -- a million-plus a day -- in January and February, with the potential for still higher tallies if and when he becomes the nominee. Over the last few weeks, therefore, Obama and his aides have added some new strings to their proposed deal with McCain. Not only should the candidates agree to stick to the federal limits, Obama now argues, but so should the Democratic and Republican national committees. And so should the shadowy, privately funded "527" groups (like the Swift Boat Veterans for Truth), which neither side likes much, but which the courts have said have a free-speech right to do more or less whatever they want, without regard to any spending caps. "It's not as easy as two guys saying, 'I'll take my $85 million, you take your $85 million,'" Gibbs said.

It won't come as a surprise that the McCain campaign sees it differently. "If two candidates said, if the other one will, they'll take [public] funds, what's to be negotiated?" said Mark Salter, a McCain senior advisor. Salter -- who seems to see no irony in a McCain staffer griping about press coverage -- complains frequently that the media isn't holding Obama to a fair standard. "Here's the tribune of the new politics, honesty and transparency in politics, not the old politics," Salter told me. "I cannot think of a more old politics maneuver than to make a pledge to the country ... [that] he would take the public money, and then he discovers, 'I can raise a lot of money, forget it.' That's about as cynical as old politics get."

Putting together the kind of deal Obama's campaign wants now may prove to be impossible -- anyone can set up a 527 group, and there's no way the candidates could keep a rein on every political activist who might want to try it. How could the Obama and McCain campaigns enforce a spending cap on 527s? If that's what it'll take to get an agreement between the two candidates, there probably won't be one.

Still, McCain campaign aides have plenty of expediency, as well as principles, on their own minds during this rhetorical battle. Though McCain recently set up a fundraising program modeled on President Bush's 2000 and 2004 structure -- with titles for bundlers who bring in the most cash (and on the low end, too; anyone who gives $25 can become a "McCain Ace") -- fundraising has been a problem for him the entire cycle. McCain doesn't particularly like asking contributors for money, preferring to schmooze with voters (or reporters) rather than donors. Making matters worse, the conservative base is still suspicious of him, so the grass-roots mailings and e-mails that might help him gin up some serious cash probably can't match Obama's fundraising frenzy.

If McCain's critics -- at the FEC and at the Democratic National Committee -- are right about his own legal situation, though, he's already toast financially. Because of vacancies on the FEC right now, the commission doesn't have a quorum. So it never officially accepted his request to get out of the public funding system for the primaries. If he did stay in the system, he would probably already have broken the law by spending more than the $51 million the public match allows him to burn through; by the end of January alone, McCain had spent $47 million on the primaries. An FEC ruling that he's locked into public funding would mean McCain can't spend another penny until the Republican National Convention in early September -- which would virtually guarantee that President Obama (or President Clinton) delivers the inaugural address on Jan. 20 next year.

McCain's lawyers believe that won't happen. The FEC wasn't going to give him his matching funds until later this spring if he did take the money. Since he never actually got any of the cash, the campaign thinks he's gotten out of the system by declaring he doesn't want it anymore. But the $4 million line of credit McCain opened in November (and updated in December) with Fidelity & Trust Bank, in Bethesda, Md., required McCain to promise to take the matching funds if he didn't do well in subsequent primaries. The McCain camp maintains that since he did do well, he doesn't have to take the matching funds, and that the terms of the loan stated the matching funds weren't collateral anyway. However, the whole matter is murky enough legally -- especially with the FEC on hiatus -- for critics to run with it. "He has material gain from what he has done," DNC chairman Howard Dean told reporters Sunday.

There's no question that the loan kept McCain's campaign alive -- and McCain knew it. "It was important for us to be able to afford the shoestring we were on," he joked when I asked him about it before he won the South Carolina primary last month.

Whether or not that shoestring is now turning into a noose depends on the FEC. The DNC filed a formal complaint about the loan on Monday, but that's stuck in the same legal limbo McCain is -- until the FEC has a quorum, the commission can't take action on McCain's request to leave the public funding system or the DNC's request to keep him in it.

So the whole thing will play out, as most complaints over campaign finances do, as a political drama. There, it's probably a wash. Neither side has the moral standing to make his critique stick firmly to the other one; to any voters actually paying attention to the fight, both candidates probably look bad. But already, the vision of a McCain-Obama race that raises national politics to lofty new heights is starting to fray. "Senator McCain is trying to explain some of the things that he has done so far," Obama said Tuesday night, "but people aren't exactly clear whether all of the T's were crossed and the I's were dotted." If the campaign begins with two self-styled reformers squabbling in the media over which one is actually the biggest hypocrite, it's hard not to wonder what might come next.